There is a total of 21 Riddler Trophies in the Panessa Studios building and they can be found in the following locations: 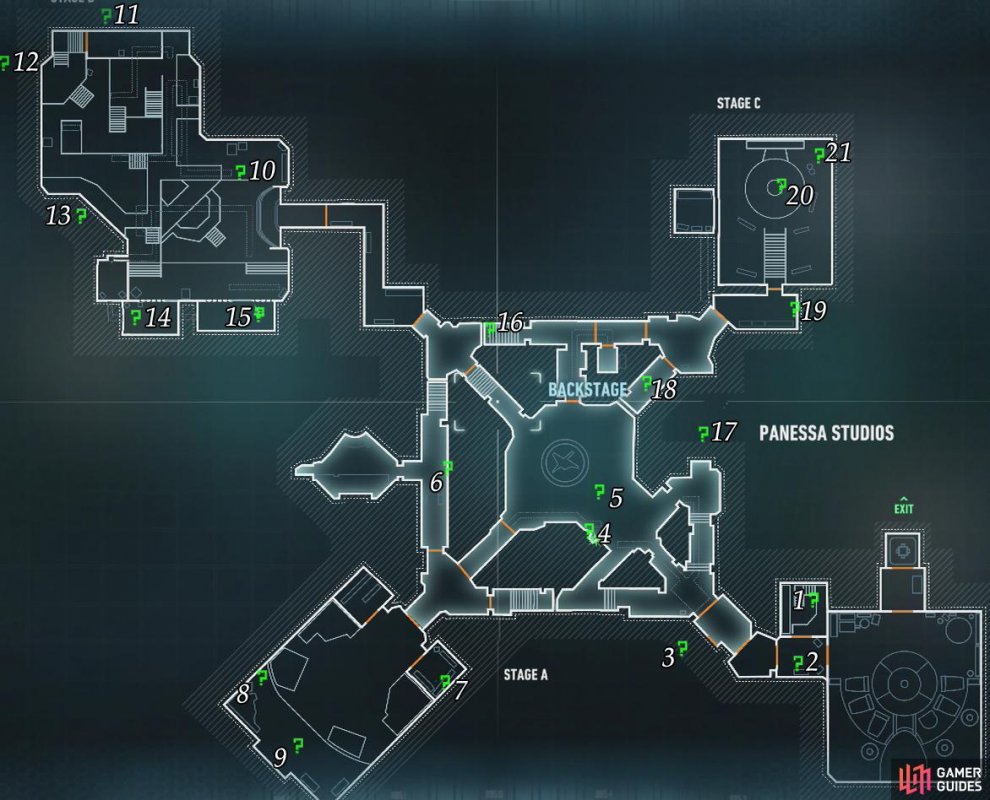 In the Quarantine Cells room, look up high above the Batcomputer to locate some arcing electricity. To the right of this, you’ll also see a window above the hallway leading further into the studio. We need to electrify a Remote Control Batarang by flying it through the electricity and then pilot it through the window, down the stairs in the next room and locate a fuse box on the wall by the gate. Hit this with the electrified Batarang to open it.

Enter the now open gate to grab the Riddler Trophy from the floor here.

After opening the locked gate described in Riddler Trophy #1 , climb the stairs inside to find another Riddler puzzle. There are a bunch of ‘?’ lights on the wall behind the Riddler Trophy , simply knock them all out using Batarangs to unlock the cage.

As you are walking from the Quarantine Cells, enter the door on the left just before entering the Backstage area. There is a Riddler Trophy on the table here. Enter the vent on the left side of the room and follow the tunnel to the end, hop out and work your way around to one of the weak walls. Burst through here and use a Fear Multi-Takedown to defeat all the Riddler Robots within the very limited timeframe to unlock the Riddler Trophy.

In the main Backstage area you’ll see a large square robot statue along the left hand wall. Use your Batclaw to pull down the red ring on its chest to reveal the Riddler Trophy .

This Riddler Trophy involves the large statue in the centre of the Backstage area. This statue is now holding onto a generator and an arrow with a ‘?’ light next to it. Hitting the ‘?’ with a Batarang will change the arrow’s direction. Hitting the generator with the Remote Electrical Charge attract shot will start the statue rotating in the direction indicated by the arrow whilst the repel shot will stop it in its tracks.

Around the outside of the statue are four panels on the ground. We need to move the hand at the base of the statue around to stop on the panels marked ‘Stage A’, ‘Stage B’ and ‘Stage C’ and we’ll need to do it without allowing the arrow to cross the ‘Reset’ panel in front of the trophy (if we do this, we have to start over). Use the Remote Electrical Charge to move/stop the statue and the Batarangs to change direction where necessary. Once you have stopped on all three panels, the trophy will be released.

By the entrance to Sound Stage A you’ll find a door to the right with a generator above it. Hit this with the Remote Electrical Charge repel feature to raise it. Inside you’ll find an electrified floor and a Riddler Trophy mounted on the right hand wall.

With all three pressure plates activated you’ll now be able to grab the Riddler Trophy .

Upon entering Sound Stage A, you’ll find a Riddler Trophy locked up on the floor in the room to the left. On the back wall you’ll see four colored ‘?’ lights. Hitting these with Batarangs will change their colours. If you exit this room and head into the other small room opposite, you’ll find the lights in a specific order sitting on a wall. Those are the colours we need to have the ‘?’ lights matching! Return to the puzzle room and hit the lights with Batarangs until they match the pattern to unlock the Riddler Trophy .

At the back of the Wild West set in Sound Stage A, you can grapple up to the top of the backdrop. Head all the way right to find a small platform with a locked trophy and a square robot statue opposite. Use your Batclaw to pull down the red ring on the statue’s chest to reveal a spinning generator. Hit this with your Remote Electrical Charge until it explodes. This will release the Riddler Trophy .

Behind the backdrop on the Wild west set on Sound Stage A, you’ll see a pair of Sentry Turrets facing each other and a Riddler Trophy between them. Use the Remote Hacking Device to temporarily blind one of the turrets and drop down behind the other to disable it. Quickly re-apply the blind hack before running over and disabling the second Sentry turret. This will unlock the trophy for your gathering pleasure.

As soon as you enter the haunted house set in Sound Stage B, you’ll see a large, spinning fan. The Riddler Trophy is inside the fan. Use the Remote Hacking Device on the control panel on the wall above the fan to turn it off so that you can grab the collectible.

In the room where you rescued the Joker infected in the haunted house set you’ll see a hatch on the roof you can grapple up to. Once up, you’ll see the Riddler Trophy behind the bars on the left and straight ahead is an electrified floor.

Use the Line Launcher to cross the floor and hop up onto the rope near the far wall. Look up above to find a pair of vents spewing out superheated steam. Use the quick-fire Freeze Blast to neutralise both vents before grappling up to the ledge behind them.

At the far end of the ledge, drop down into the room with the trophy and pick it up.

On the stairs leading into the building where you rescued the Joker infected in the haunted house set you’ll see a hatch in the floor. Drop down through here to the room below. Use the Disruptor on the proximity mines (you’ll need the ‘Disrupt Mine’ Waynetech upgrade) to disable them and then run up and slide beneath the gap in the wall to find the Riddler Trophy .

On the south east wall of the room you’ll notice a weak wall. Below this is a generator that we can shoot with the Remote Electrical Charge attract function. Doing so will lower a weight block onto the platform with the generator.

Plant some Explosive Gel on the side of the block facing the generator. Use the repel function on the generator to send the weight back up. As it passes the weak wall detonate the Explosive Gel to destroy the wall and reveal the Riddler Trophy inside.

In the southern part of the haunted house set there are three small rooms off from the main area, one to the west and a pair to the south. This Riddler Trophy is located in the middle room. Step on the pressure plate in the corner and you should be able to make out a ‘?’ light up in the western room through the window. Use a Remote Control Batarang , fly it through the vent by the trophy and hit the question mark to release it.

In the southern part of the haunted house set there are three small rooms off from the main area, one to the west and a pair to the south. This Riddler Trophy is located in the easternmost of these. Here you’ll find the trophy in a ball within a glass pipe with a steam vent nearby.

Use the Freeze Blast on the steam vent to have the ball move through the tube. When it stops (and it will 2-3 times) hit the steam pipe behind the ball with a Freeze Blast to keep it moving. When it drops to the floor at the far end, you’ll be able to pick it up.

From the main Backstage area, take the passage leading to Sound Stage C. When you hit the wall, turn left and look up to see a steam vent. Hit this with a Freeze Blast to disable it and then grapple up to the ledge. You’ll end up on a wire floor which you can look through and a Riddler Trophy in a cage on the far side of the area.

Just next to the main entrance to Sound Stage C there is a weak section of wall we can destroy with Explosive Gel . Inside you’ll find a Riddler Trophy behind the bars at the back of the room and a pressure plate in the foreground.

Step on the pressure plate to open a wall hatch opposite. There are two ‘?’ lights in this vent system that we’ll need to hit with a Remote Control Batarang . On the first throw, upon entering the vent, take the first right and then the next left to find the first ‘?’. On the second time around take the first right again and you’ll see a new target to hit.

The third throw is a little different. Again you’ll need to take the first right and at this point the Batarang will become electrified. Take the next right to have it exit into the trophy room. Fly the Batarang up into the fuse box on the wall above the trophy to unlock the gate.

Just next to the main entrance to Sound Stage C there is a shutter door with a generator above it we can open with the Remote Electrical Charge repel attack. Inside you’ll find a locked Riddler Trophy surrounded by eight generators. In order to open the trophy we’ll need to activate all the generators via the Remote Electrical Charge in a specific order. Fortunately the posters behind each give away the order if you know what to look for – we’ll need to activate them based on the age of the people in the pictures from youngest to oldest.

In the hallway with the mirror and the keypad leading to Sound Stage C, you’ll see a locked Riddler Trophy on the table by the door. Approach this and then look back down the hallway to spot a vent, above this in the corner is a ‘?’ light. Hit this with the Remote Electrical Charge to unlock the trophy.

In the centre of Sound Stage C there is a locked trophy. Approach the green button on the pedestal nearby and interact with it to have the Riddler appear on the screen. After he disappears, he’ll place the names of colours up on the screen and give you a bit of a memory test. This next bit can be a little tricky - you’ll need to note the colour of the word that appears on the screen, NOT the colour that the word describes! After each series of words, you’ll need to hit the coloured ‘?’ in the same sequence.

After completing the third challenge, you’ll be able to grab the **Riddler Trophy** .

In the back right corner of Sound Stage C from the entrance you’ll find a slot machine with a locked Riddler Trophy in front. Use the Remote Hacking Device to lock each of the wheels into place on the same icon (Diamonds worked for me) to earn the trophy.