The ‘Own the Roads’ side missions are very similar to the ‘Occupy Gotham’ side-missions in that they revolve around finding and taking out militia checkpoints that have been established throughout Gotham. Unlike ‘Occupy Gotham’ though, which focuses on rooftops, the objectives for this side-mission are all located at street level throughout the city.

These objectives can be identified by a Diamond-shaped marker on the world map and in the game word are comprised of small zones encircled by large red barricades.

These objectives involve a range of approaches, ranging from stealth, to all out melee brawls as well as the occasional hack-whilst-you-fight scenario. In general, to eliminate a checkpoint, you’ll need to enter the area, find the commander and destroy his communicator.

The commander can be located by switching on detective mode and looking for the guard/enemy that has the pulsating energy signature. Once he has been knocked out, inspect his body with Detective mode active for a button prompt to destroy the communicator.

There are 20 checkpoints in total with four on Bleake Island, and eight on both Founders’ Island and Miagani Island. Their locations along with what you can expect to find are listed below.

There are a total of four militia roadblocks located on Bleake Island and they can be found in the following locations: 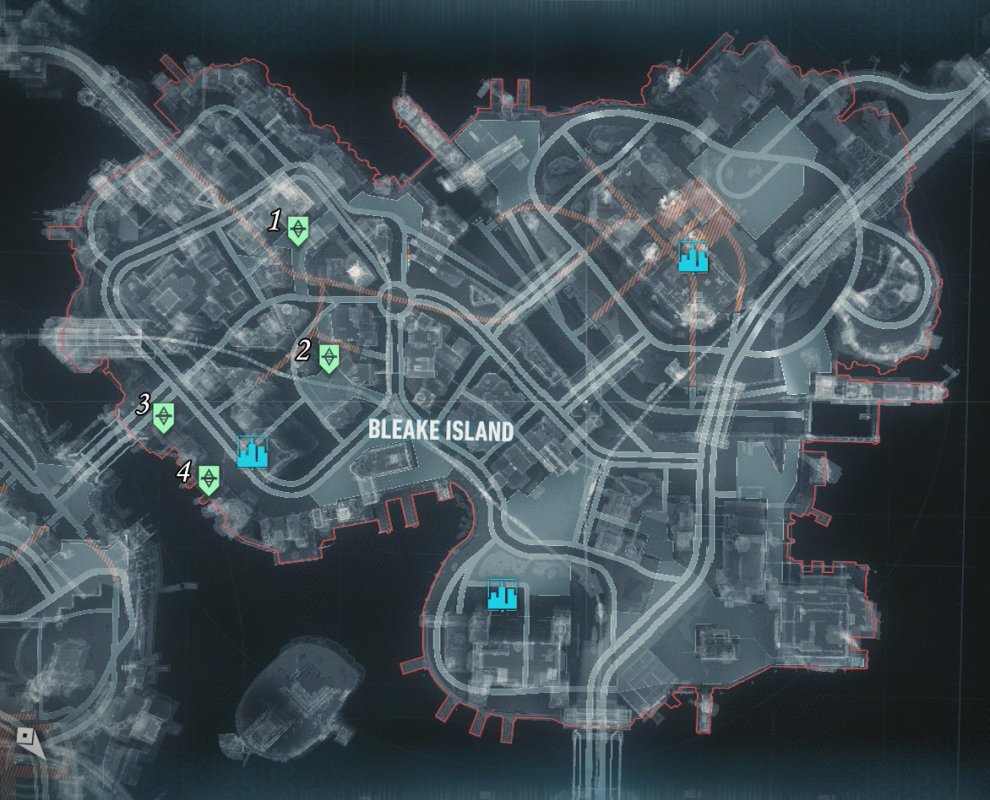 This roadblock is one of the easier ones you will come across. It guarded by a single Soldier along with three Sentry Turrets. The Soldier will stay put as long as you do not alert him. Of the three Sentry Turrets, the two outer ones will be rotating and the central one will remain locked in position.

Once he has been knocked out, inspect his body with Detective mode active for a button prompt to destroy the communicator.

This fairly large roadblock is also one of the toughest fights you’ll encounter in the entire game and unfortunately, the only way to clear this area out is to fight the large contingent of enemies within. This small army includes: a group of 10 Soldiers (two with stun sticks, two with shields and two with Guns), two Medics, two Combat Experts and a pair of Brutes.

Across the top of the area is strung a cable that will allow you to prepare somewhat. I’d recommend using the Disruptor to disable the enemy firearms and position yourself for a Fear Multi-Takedown in which you are able to target one of the (or if you are lucky both) Medics to kick off the fight. Once the fight starts, it then becomes a battle of attrition. Keep working your way through the enemies, making sure to keep the firearms from being picked up and being sure to watch your surroundings for incoming Combat Expert attacks and the occasional environmental projectile.

Use your usual tactics to dismantle the opposition Soldiers and Combat Experts one at a time before turning your attention to the Brutes.

Note that there is a pair of Sentry Turrets on the northern end of the roadblock, so stay away from this area whilst you fight!

Once all the hostiles have been knocked out, inspect the pulsating body with Detective Mode active for a button prompt to destroy the communicator.

You’ll find a Brute with a shock stick and two Soldiers on a deck overlooking the road leading to Perdition Bridge. Defeat these three and then use the Remote Hacking Device on the console here. Use Detective mode to follow wires around the side of the building and you can enter the opening that they lead to undetected. There is a pair of Soldiers inside that we can sneak attack to clear out the roadblock.

Once all the hostiles have been knocked out, inspect the pulsating body with Detective Mode active for a button prompt to destroy the communicator.

This is a really difficult checkpoint to eliminate without upgrading the Disruptor a little to sabotage Drones. This is because there is a pair of deadly Sentry Drones and six armed Soldiers guarding this area with only destructible crates for cover. It is possible to blind one sentry drone with the Remote Hacking Device and then attempt to take out the Soldiers whilst avoiding the other Sentry Drone’s line of sight, but it requires a lot of patience and hit and run tactics.

On the other hand, having upgraded the Disruptor with the Drone sabotage capability and you can shoot them once, walk into their line of sight so that they attack and they will explode. This leaves you to take out the enemy Soldiers a little easier!

After dealing with all of the guards, inspect the pulsating body with Detective Mode active for a button prompt to destroy the communicator.