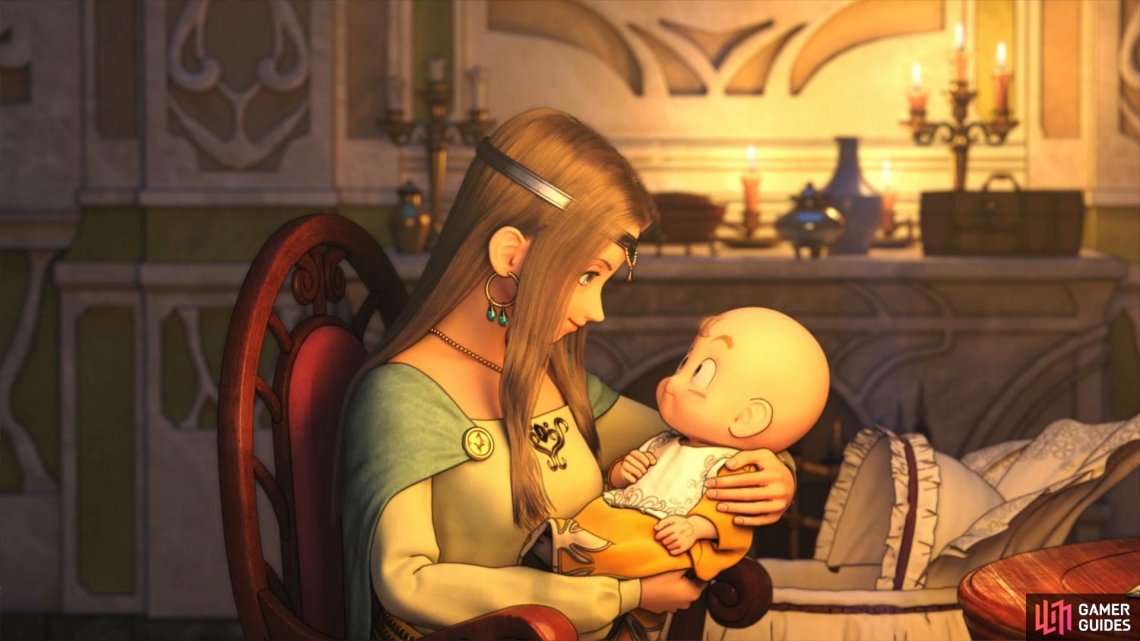 As you begin the game, you’ll be given the option to name the protagonist (referred to as the Hero in this guide) along with any modifiers from Draconian Quest. This will alter your game into making it more challenging and is something more intended for veterans of the Dragon Quest series.

You’ll be treated to a cinematic of life in the city when matters take a sudden turn for the worse. A small baby with a mark on his hand is rushed out of the castle and placed into a basket that is sent down the stream. An old man discovers the baby and takes him into his care along with reading the letter tucked inside the basket. 16 years since this fateful day, a young man and his friend set out for their coming of age ceremony. 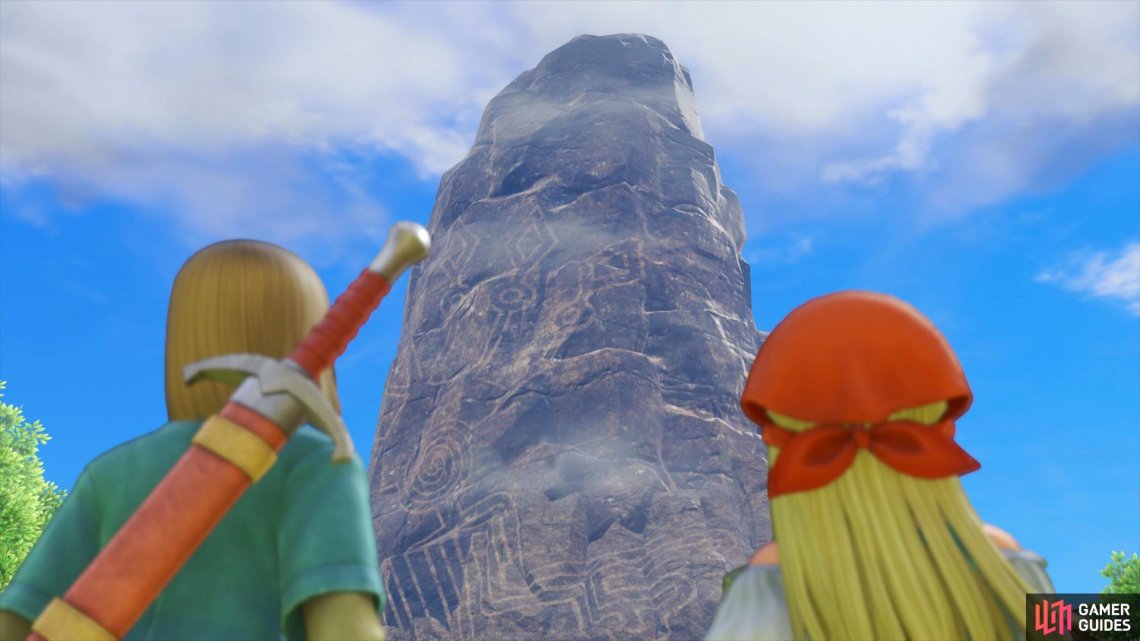 You’ll find yourself at the Base of Cobblestone Tor alongside Gemma and her dog, Sandy. Before you take off after the dog, familiarise yourself with the controls and check out the menu. The Hero is currently using the Cobblestone Sword but he also has a Cobblestone Greatsword that you can switch to. You’ll gain extra damage from the Greatsword but lose the option to use a Shield, offense over defense. Greatswords are a great choice as a weapon for the Hero as a lot of his best skills are from the Greatswords category and he’s the only Greatsword wielder for first Act of the game.

Take a look in your menu to find the Trodain Bandana and Togs, equipping these will change the Hero’s apperance to reflect that of the Dragon Quest VIII Hero. Additionally, if you have any dlc you with to claim, head into the System Settings under Misc and claim your rewards.

Once you have your bearings, head towards the bridge to meet with Dunstan, the Elder of Cobblestone and listen to what he has to say. After explaining your task to you, continue up the path where you’ll be thrust into battle against three Slimes! You don’t have any abilities or spells at your disposal so simply attack the Slimes with regular attacks. Sandy will assist you in the battle and he cannot fall so you shouldn’t have too much to worry about.

Following the battle head left to the monument and search behind it to obtain a Pot Lid. If you’ve decided to go with the Greatsword then this will be of no use, otherwise equip the shield and continue into the cave up ahead. 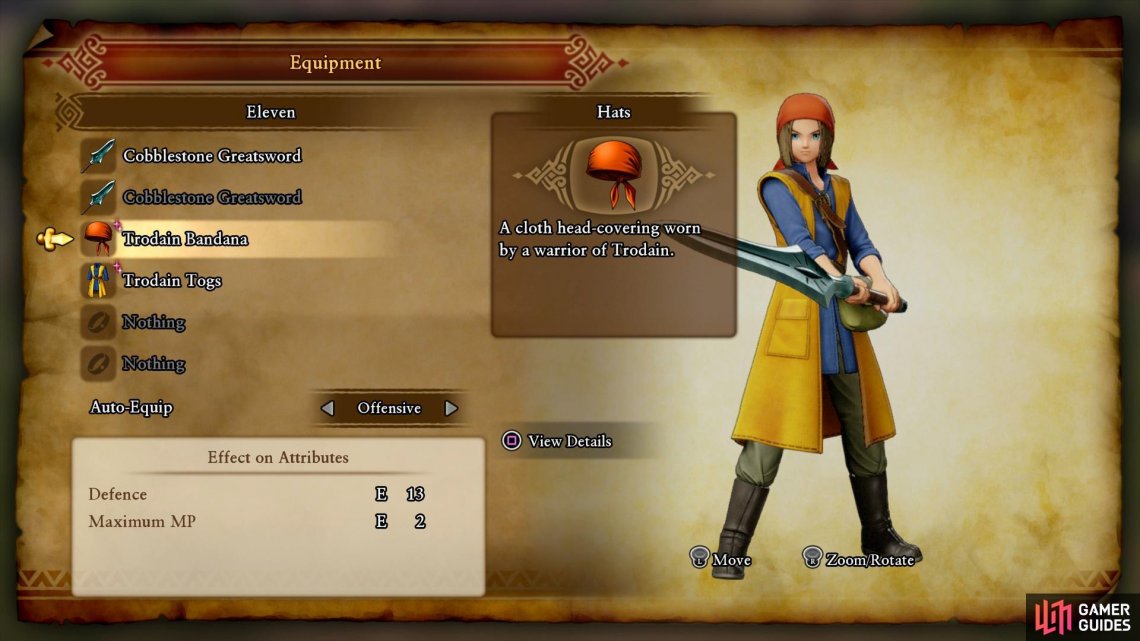 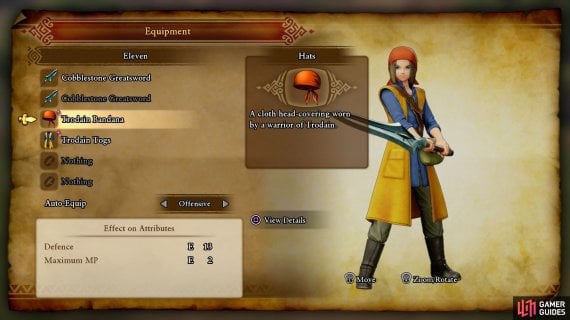 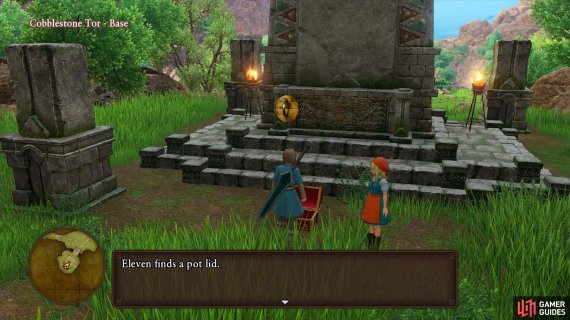 Switch to the attire the Dragon Quest VIII hero wore for a boost in defense (left), you’ll find the game’s first chest behind the plaque. (right)

You may have noticed in the bottom right corner of the screen that an Auto Save occurred as you entered the cave. This will happen from every screen transition so if you feel you need to quicksave, make use of this feature.

Follow the path and at the intersection, take a right and climb the wall with the [X Button]. You can press this button to scale ledges that are too high to jump onto. At the end of this short path you’ll come across a tree and at the base of it, you’ll notice a Sparkly Spot, interact with it to obtain a Medicinal Herb.

You will come across Sparkly Spots all over Erdrea and from them you’ll obtain a wide variety of items. Usually these come in the form of materials and you’ll want to pick them up whenever you come across them. Note that later in the adventure you’ll find this data recorded on your map.

Head back to the intersection and continue to follow Sandy through the cave where you’ll get a tutorial on initiating battles. You can trigger a battle by swinging your weapon at the monster on the field. This will start the battle with the monster taking some damage, make a habbit of always trying to start battles in this manner. Continue to fight the Slimes as you make your way through the cave, the Medicinal Herbs that they drop are always helpful as is the Exp they reward.

As you cross the bridge and enter the cave once more, you’ll encounter a new type of enemy, the Needlers. These creatures will most likely require two hits to defeat them but they shouldn’t pose a threat still. At the next intersection, take a right again and follow it to some stairs where you’ll find two pots. You can interact with these, smashing them on the ground where you’ll obtain another Medicinal Herb and 5G. 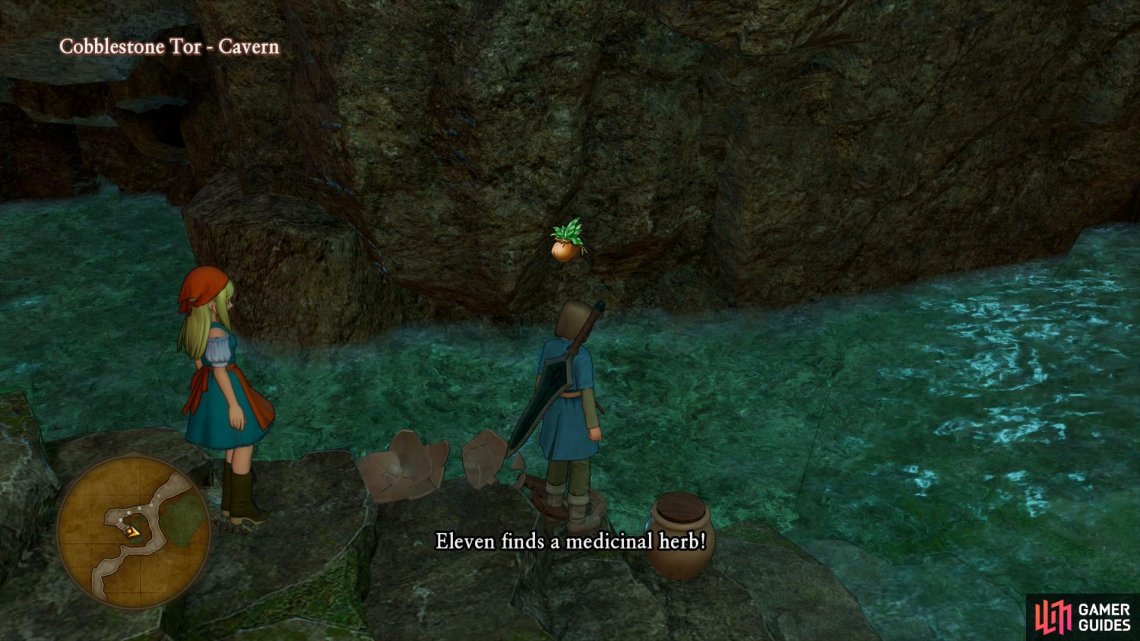 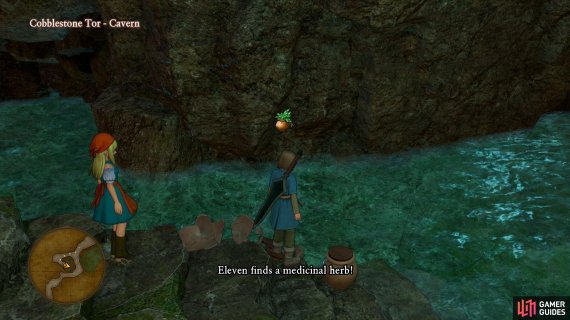 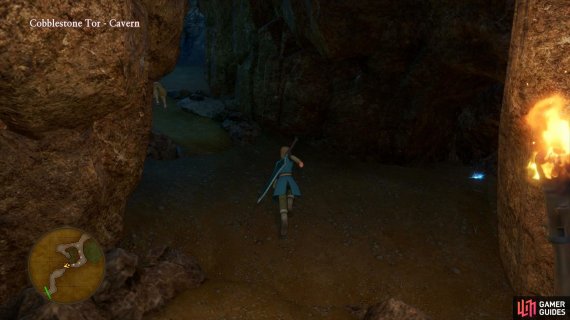 Items found in pots and barrels are a one time affair (left), Sparkly Spots on the other hand will respawn over time. (right)

Return to the intersection and follow the path deeper into the caverns where you’ll spot another Sparkly Spot this time containing a Copper Ore. Continue through the cave and eventually you’ll find yourself back outside where it looks like fog has gathered. Gemma will spot a boy from the village in danger as a pair of Smogs attack.

The Smogs shouldn’t be too much hassle as long as you keep your HP above 10. It should take several hits per Smog to take them out however, longer if you’re using the Cobblestone Sword. If your health does drop too low, Gemma will heal you so you should be free to concentrate on attacking. The Smogs themselves will only perform regular attacks and can also be stunned by Sandy’s barking. 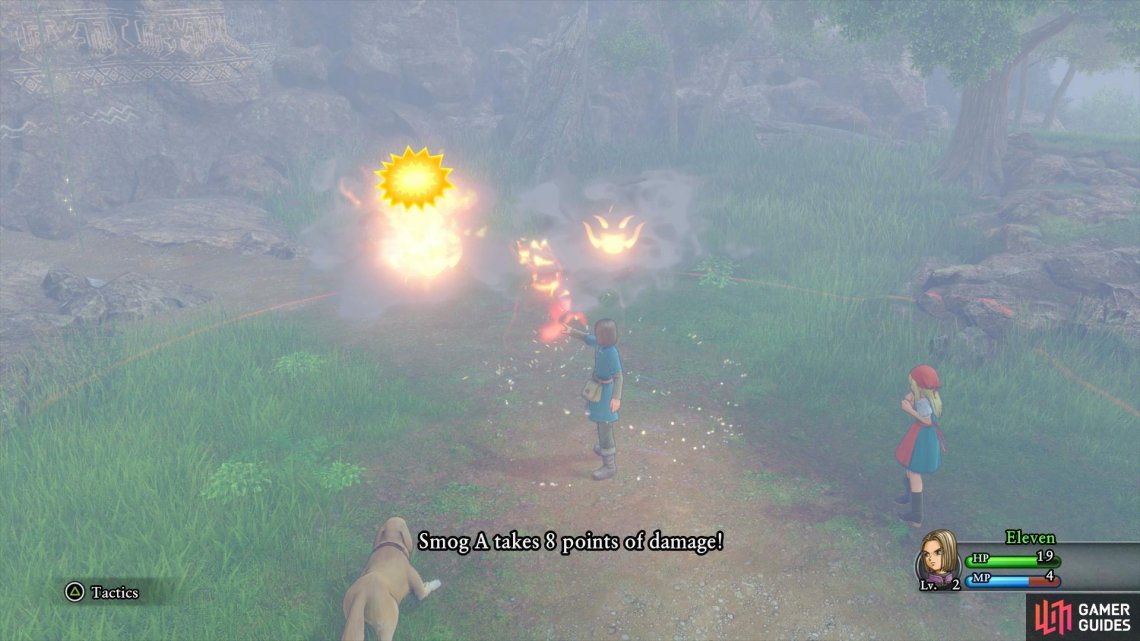 Use Frizz if you’re having difficulties connecting with a physical attack.

Following the battle, the boy will return to the village with the help of Sandy, leaving you and Gemma alone. Before you head towards the rope, look in the northwest corner of this area to find a Pink Pine by the tree, pick it up and head towards the rope, climbing it with a press of the [X Button]. Follow the ledge around the mountain as you continue to traverse the mountain, there are no more enemies between you and the summit. A Gryphon attacks from the sky suddenly as Gemma is thrown over the side, as the Hero struggles to save her, the mark on his hand glows and the creature is zapped from the sky. Following the events, before you head back, search near the tree in the northwest to find another Pink Pine. Proceed towards the cave to automatically find yourself back at the bottom of the area where everyone is waiting to congratulate you.

Awarded for completing the coming of age ceremony atop Cobblestone Tor.