Now that you have been given a task to pay off a debt, it is time to explore the village of Cierzo to prepare yourself for what is to come.

If you plan on joining the Blue Chamber Collective faction, you should be kind toward a character named Roland Argenson, who you will first encounter in Cierzo. If you are anything but kind this will have consequences for a later major quest. Be sure to always choose encouraging dialogue options when interacting with him.

Once you have spoken with Rissa to learn something about your family history, head down the hill from your home and speak to the guard for some basic information about the village. Continue on down the hill and into the village centre. To your right you will find a shopkeeper named Doran. Speak with him to sell some of your items such as old clothing. Don’t be tempted to sell any food items or hides, these will come in handy.

When you’ve bought what you need, it is recommended to purchase the ‘Nomad Backpack’. This will allow for your carrying capacity to be greatly increased. Once purchased, equip it from your current primitive backpack, which will then be placed on the floor. Loot the primitive backpack and its contents will be placed in your new one. The last thing you should do in this area is speak with Doran again. Choose ‘I’d like to talk’ and he will provide you with a delivery quest.

After you’re done with Doran, head north to the beach. At the end of the beach you will find a water filtration system and a small fountian. Use the fountain to drink some fresh water and collect the waterskin which can be found on the edge of the fountian.

Once you have the waterskin, go back to the main village centre where Doran and the other traders are. Look west until you see a wooden walkway, shown below. This leads to the chambers beneath your lighthouse, and also to some caves beneath that. 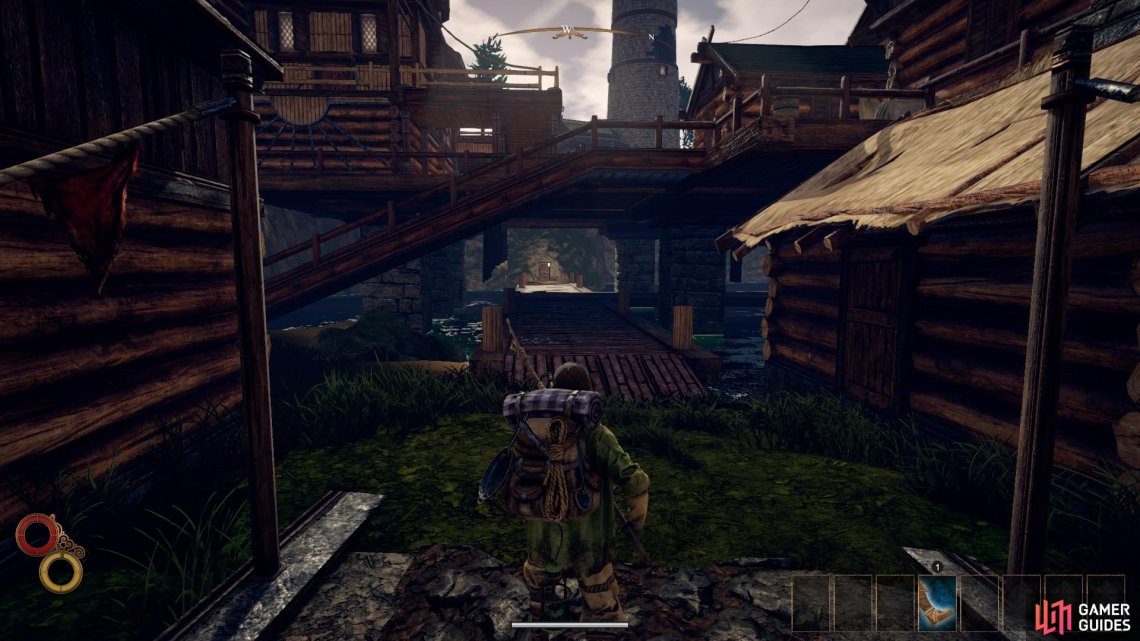 Follow the walkway to the door beneath your lighthouse.

Once inside, loot the items which can be found in your basement. To the west you will see an opening to a cave. Head on through and turn on your lantern so that you can see properly in the dark. As you enter into the cave you will see a mining pick to your left. If you still have the one from the beach you won’t need this at the moment, but you can pick it up later to sell to the shopkeeper, Doran.

Moving through the cave you will ascend a slope in the terrain, at the top of which you should stop. The room in front of you contains two troglodyte enemies. Be careful not to pull them both at once. Before you move in, take your backpack off and place it out of harms way. Keeping it on will make it more difficult to manoeuvre in combat and will also risk it being damaged each time you are hit.

With your bag in a safe place, wait for one to patrol near to you and then pull it back down the slope. Although it may be tempting, try not to be the first to initiate an attack. The troglodyte will almost always be the first to hit if you both strike at the same time. Instead, wait for the troglodyte to attack, evade with a sidestep or dodge and then swiftly execute a combo hit before stepping back to repeat.

If you accidentally pull both enemies, you can deal with them more easily be running back down the slope into your storage room. From here you can utilise the boxes in the centre of the room by kiting both enemies around the boxes while you recover stamina when necessary.

Once you have killed both troglodytes, go back up the slope to the first room in the cave. Using your lantern or a torch to guide your way, turn right at the top of the slope until you come across some ore. Use your mining pick to extract the resources (they will most likely be iron scraps). Now head south west until you reach the top of another slope. This leads to the outer wilderness, so it is not a good idea to go down there yet. Instead, turn east and pick the mushrooms which can be found in a small opening. You can now go back the way you came to the village centre.

Check your inventory to make sure that you have at least one bandage available. If not, you can purchase one from Doran for 3 silver. After selling any items that you might have acquired in the cave such as troglodyte spears, extra mining picks, and any tattered clothing, head back to the lighthouse and rest for a few hours to recover your vitals and repair any equipment.

Upon waking you should be well rested. Make your way back to the village centre and begin to explore the village more thoroughly by heading south east beyond Helmi the Alchemist. When you reach the farmer tilling the fields, turn north east and you will see a pitchfork leaning beside the stone wall of a building. 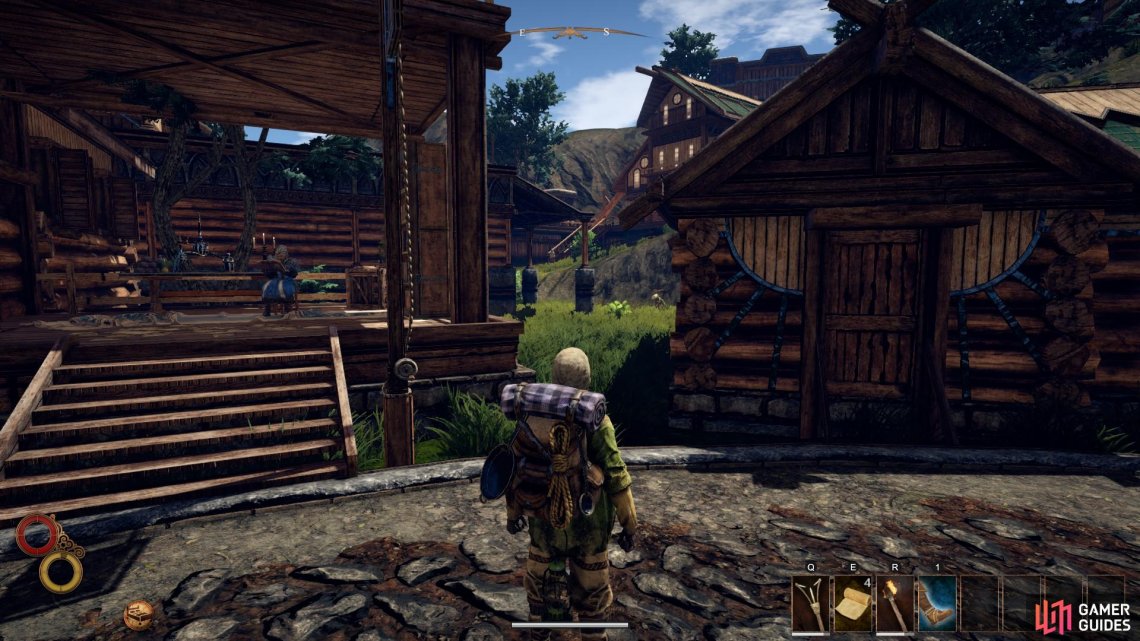 Walk between the buildings to the south east beyond Helmi to find the pitchfork.

Now that you have the pitchfork, head up the pathway immediately behind the farmer until you reach the top of the hill. Here you will find the town hall, to the right of which you will find a great axe leaning against some boxes. You can choose to use either the pitchfork or the great axe as your main weapon for now, or you can sell both for silver. Regardless, next enter the town hall and walk up the stairs to the right of the main hall. You will find a chest at the end of a bed. Loot this for some special, randomly generated loot.

After leaving the town hall, head back down the hill and turn right toward the south east. You will see some stairs leading to a balcony. A woman named Helen Turnbull can be found here. Speak with her about some work to acquire a quest to collect a special type of mushroom. Next, head north east until you reach the main gate of the town. Here you will find the guard, Burac Carillon. Speak with him to learn a skill.

The skill which Burac will teach you depends on the weapon that you currently have equipped. Be sure to have chosen a preferred weapon before proceeding. If you are uncertain, a good choice is the machete; this counts as a one handed sword, the skill for which applies a damage over time effect on your target when executed. This allows you to whittle down the health of an enemy without risking too many regular strikes.

To learn the skill you should inform Burac that you want to go outside. He won’t allow you to go before he teaches you at least one skill. Once you’ve equipped a weapon which you want to learn a skill for, select ‘Yes’ to his questioning. When done the skill will be available to you, but don’t head out the gates yet. Open your inventory and navigate to the skills tab. You will see your new skill here, as shown below. Right click the icon and assign it to a quickslot. 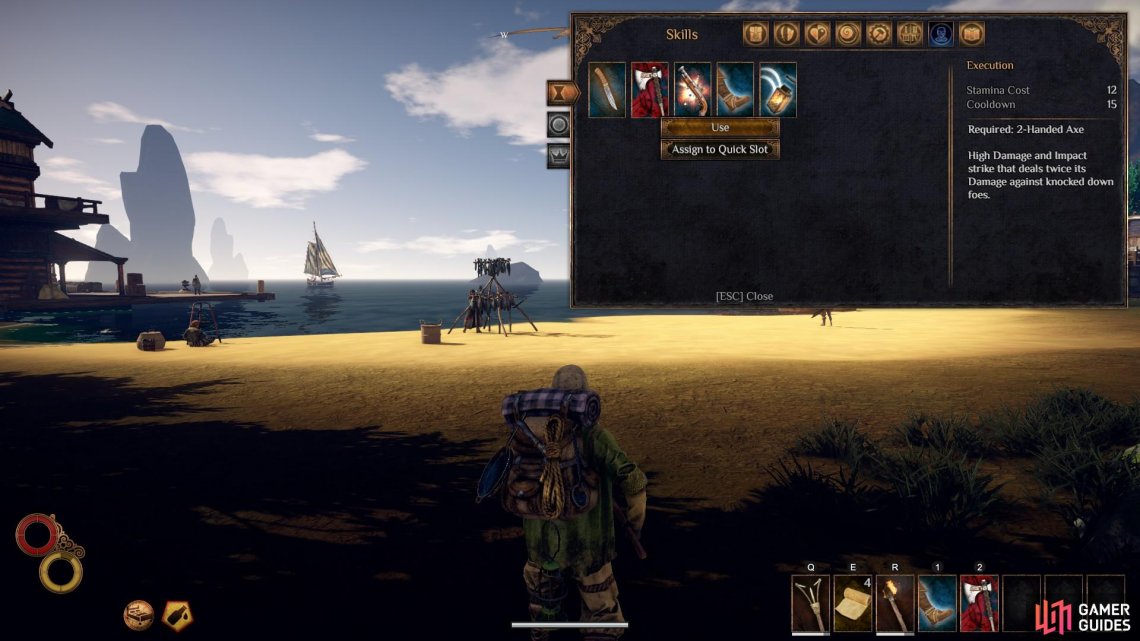 You should be able to see your new skill along with your other basic skills in the skills tab.

With your new skill equipped, head north east toward the water filtration system. Walk underneath it until you find yourself on the first jetty. At the end of the jetty you will find a fishing harpoon. Pick it up and then head back toward the beach. Before you come off the jetty, look in the water to your right; you should see some fish swimming here. Use the harpoon to catch them, earning you the achievement ‘Hook, Line and…Harpoon?’.

On your way back along the shoreline you can use the harpoon to catch any more fish that may be visible. Before you leave the beach, take the machete which can be found on the fish drying rack. At this point you should have acquired everything that the village has to offer in terms of free, lootable items. It is now time to pay off your debt in the form of a tribal favour.

First, go back into the cave system beneath your lighthouse. Don’t worry, there won’t be any more troglodytes in this particular system. At the bottom of the slope beside the small opening where you found the mushrooms, you will see a sign warning of danger beyond this point. Ignore this and jump down. Exit the cave system into Chersonese, unlocking the achievement ‘Venture Outward’.

Here you will find yourself on a beach. Walk along the shoreline, gathering seaweed and any other resources that you encounter along the way. Eventually you will come across a man named Michel Aberdeen who is sitting on the beach, injured. Speak with him and offer to tend his wounds with a bandage. Doing so will earn you a Writ of Tribal Favour, which can be used to pay off the debt for your lighthouse. 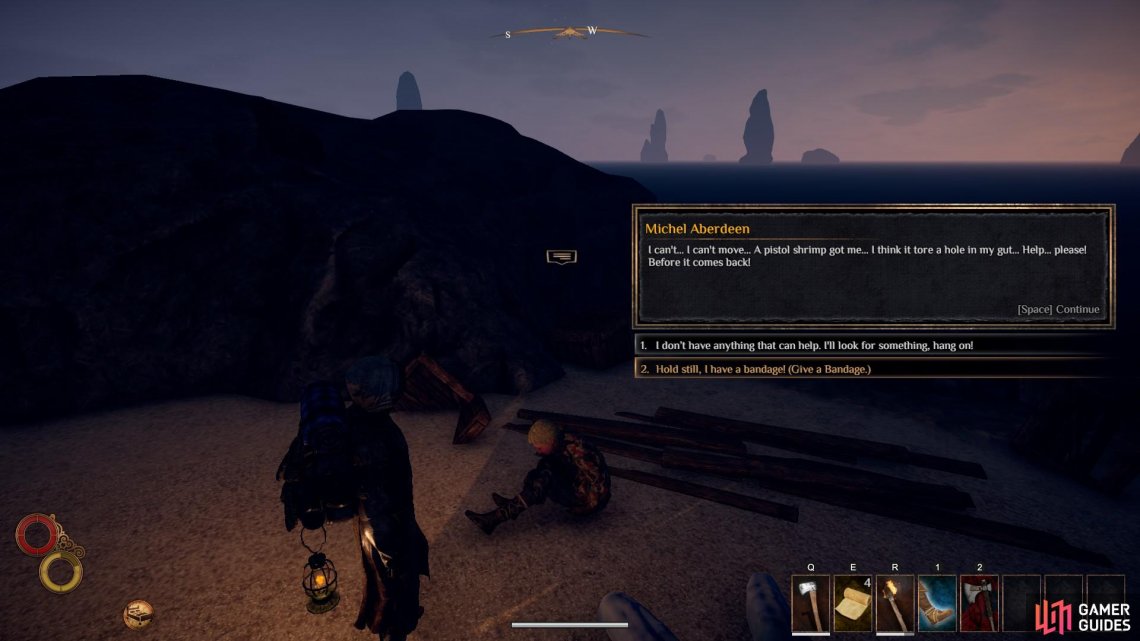 When speaking with Michel, choose option 2 to provide him with a bandage and secure your writ of tribal favour.

With Michel healed, you can now head back to Cierzo. However, you won’t be able to go back the way you came. Instead you will need to head north east until you pass over the hills away from the beach. When you hit grassland beyond the hills, head north. Keep to the hillside and follow it until you see an opening leading to an overview of the beach. Here you will find a cache beside a tree and some stone blocks. Loot the cache and continue on north west, following the hills. It won’t be long until you find yourself at the main gates of Cierzo.

When you arrive back in town you will probably need some rest. Head back to your lighthouse and use your bed to rest for a few hours. You can now go to the town hall and speak with Rissa, who will relieve you of your debt when you present her with the writ of favour, completing ‘Call to Adventure’ in the process.