This quest can be acquired from Researcher Boye in the Face of the Ancients dungeon, located in the northeastern region of Enmerkar Forest. You can reach the dungeon by taking the road east out of Berg and then turn north west at the split in the road. You will soon come across the entrance to the dungeon on your right. 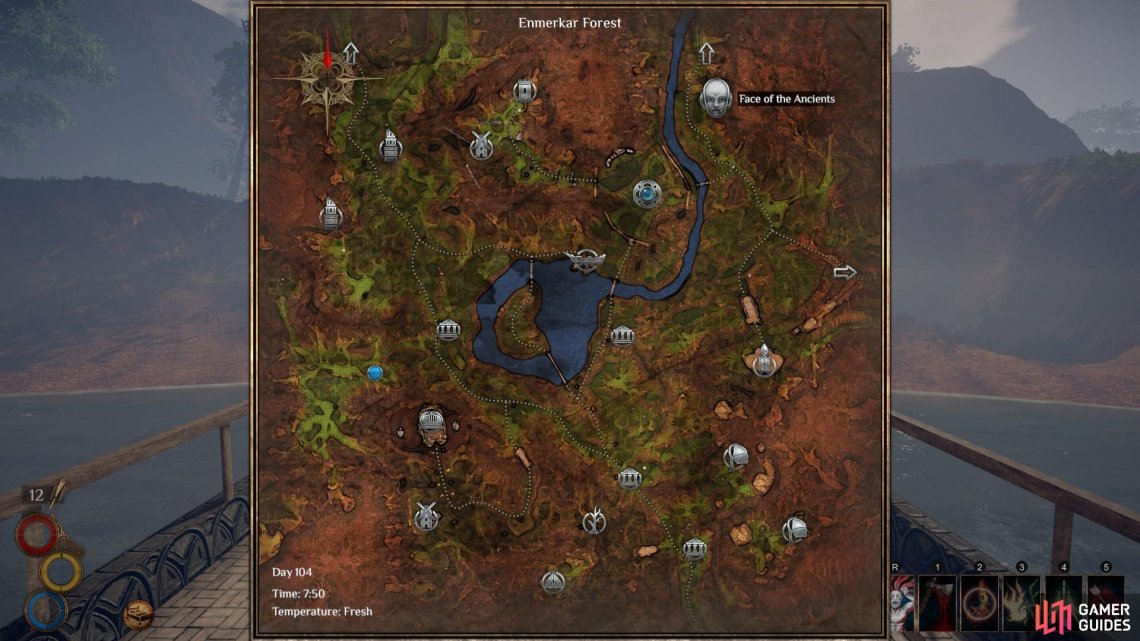 (1 of 2) The location of the Face of the Ancients dungeon, north east of the city of Berg. 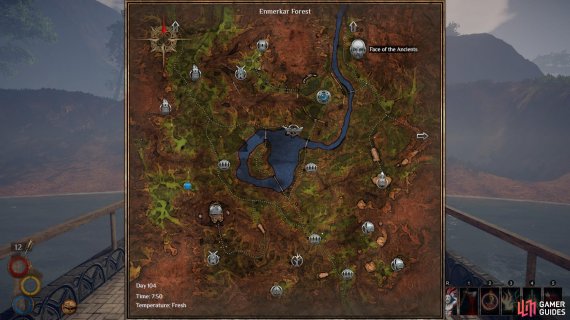 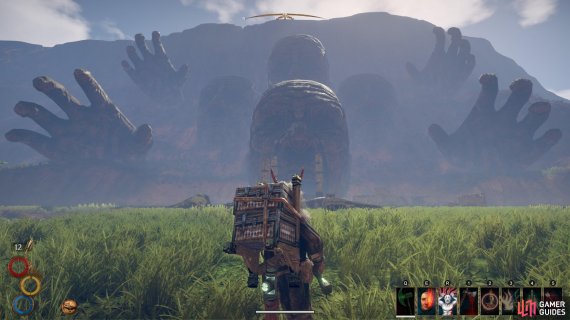 Once inside, speak with Researcher Boye who will be waiting in the first room. He will task you with finding the red idol in return for 300 silver. He states that the idol is located somewhere in the depths of the dungeon, but with further indication of precisely where.

When you climb the rope down into the dungeon you will immediately encounter some fire element mobs. These are immune to burning and resistant to fire, but vulnerable to frost. They are fairly weak if you exploit their vulnerabilities by using frost damage, but be careful to avoid their attacks. Almost all inflict burning which can kill you quicky if you don’t treat it with water. You can avoid their flaming ranged attack with a quick dodge backward or with a sidestep.

When the creatures in this chamber are dead, continue on and then head north toward an ice chamber with an iron gate, as shown below. When you reach the chamber, turn west and follow the path. You will encounter a regular purple ghost here which is easily defeated. When you reach a split in the tunnel, take the path northwestward and head down the slope. At the bottom of the slope, turn left northward and follow the path up the slope to the south. From here on you may encounter The First Cannibal, a particularly powerful Wendigo mob. 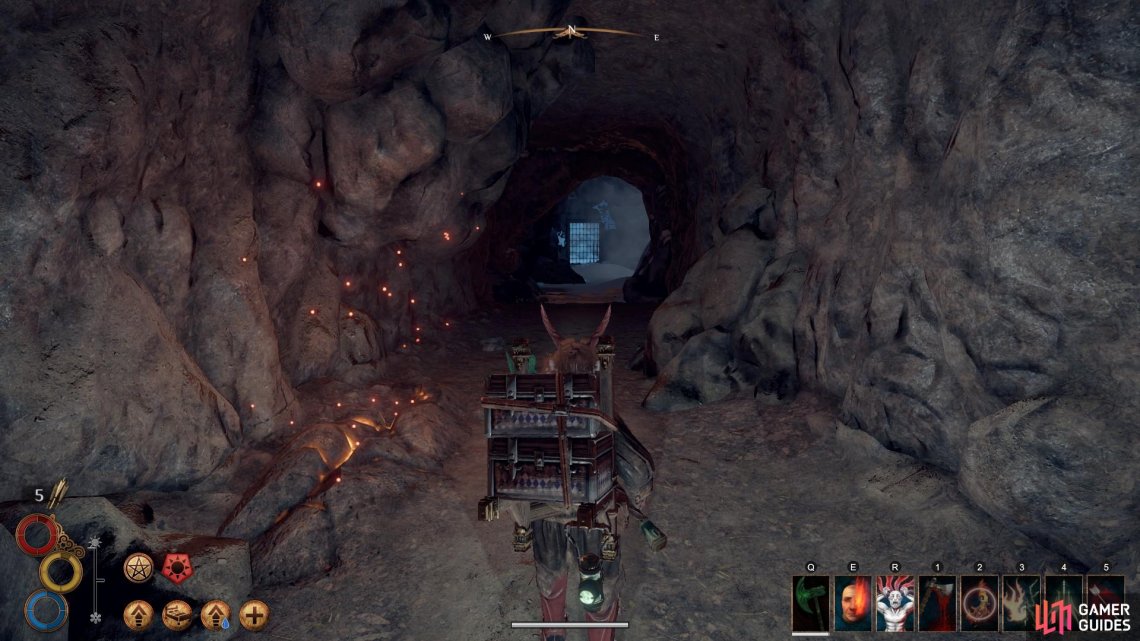 (1 of 2) Follow the tunnel path north to the ice chamber, where you can see an iron door in the distance. 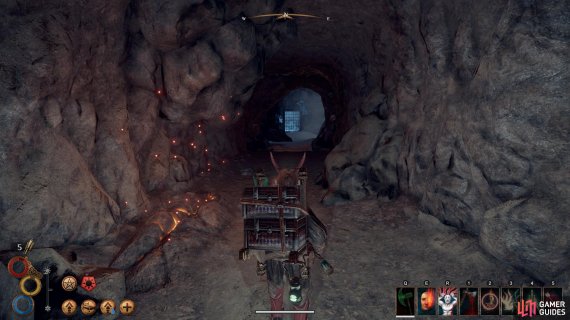 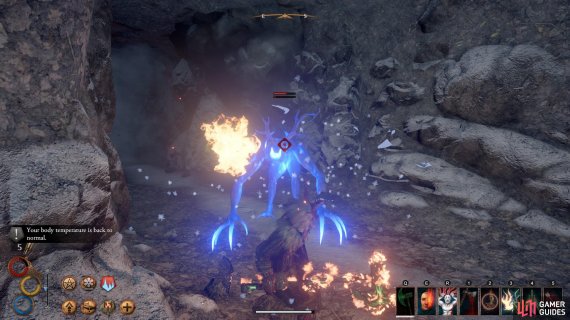 Follow the tunnel path north to the ice chamber, where you can see an iron door in the distance. (left), Try to overpower The First Cannibal with a high impact weapon infused with fire. Alternatively, apply a slow via magic or bow and kite it through the tunnels. (right)

Before you initiate combat with The First Cannibal, be sure to apply a fire rag or varnish to your weapon. It is a fast moving creature and applies the Chill debuff, increasing its damage output while reducing your resistance. It is immune to frost damage but vulnerable to fire and lightning. It will sometimes heal itself upon hitting you, so it is a good idea to focus on evading its attacks while exploiting any openings immediately after. Alternatively, if you have a high impact weapon you can combo heavy attacks to keep the creature knocked down.

When The First Cannibal is dead, loot it for a unique and powerful weapon, the Skycrown Mace. You should also take the Krypteia Tomb Key, providing access to a small chamber to the north. This chamber contains the Red Idol, referred to as the Scarlet Lich’s Idol, along with a corpse which can be looted for randomly generated loot. When you pick up the idol the quest log will update, indicating that you should now take it to Researcher Boye. You can choose to do this and receive 300 silver while providing Boye with long life, or you can take the idol to the altar of the Scarlet Lady.

Note: If you take the idol to Researcher Boye you receive 300 silver and nothing more. If you take the idol to the Scarlet Lady, you will receive a unique dagger named Red Lady’s Dagger. This deals 20 physical damage, 20 fire damage and 49 impact, with an attack speed of 1.0. It can also be sold for 600 silver, making it the better reward when roleplaying preferences are disregarded. 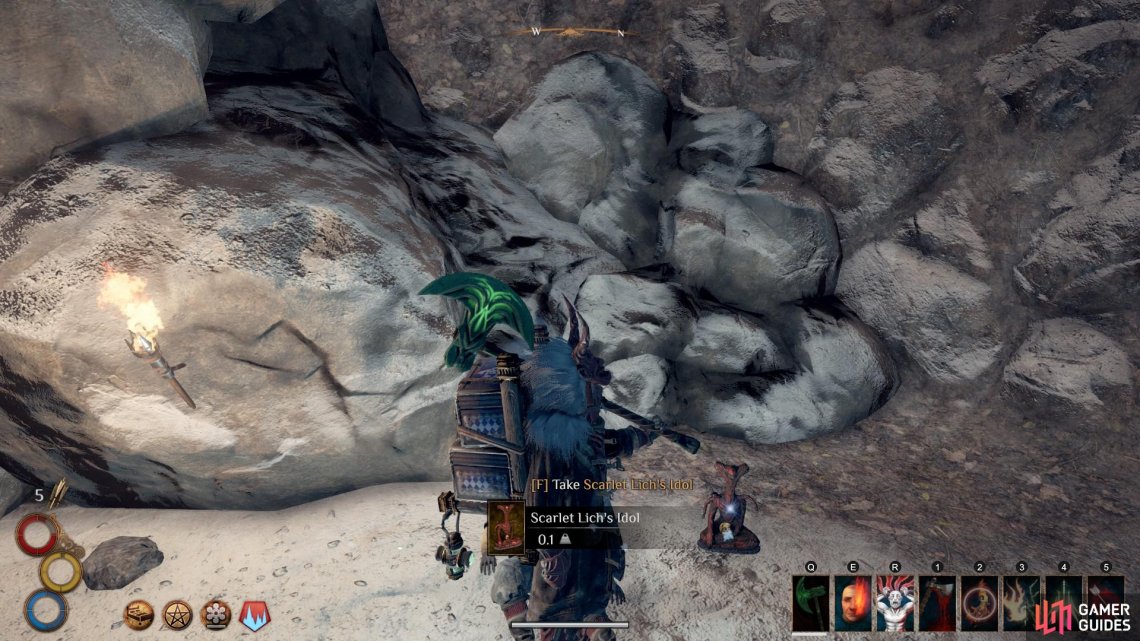 You will find the idol, referred to as Scarlet Lich’s Idol, to the right of a corpse in the room accessed with the key from The First Cannibal.

Taking the idol to the altar of the Scarlet Lady

If you decide to take the idol to the altar of the Scarlet Lady, head south from the ice chamber and interact with the iron door to proceed to another fire region. Continue south until you reach a split in the path, then turn west. You will encounter some Obsidian Elemental mobs here, so be ready to apply an ice rag or varnish and ensure that you have enough water to clear any burning inflicted. 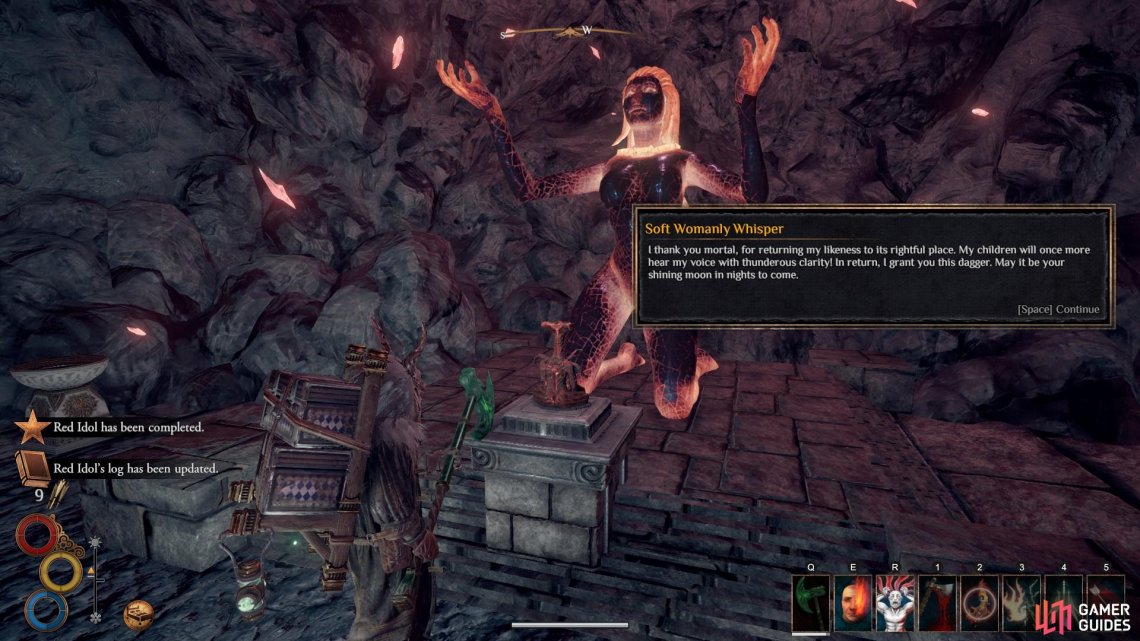 (1 of 2) Place the idol on the pedestal in front of the Scarlet Lady. 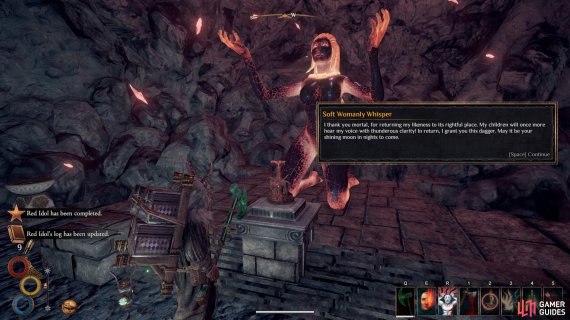 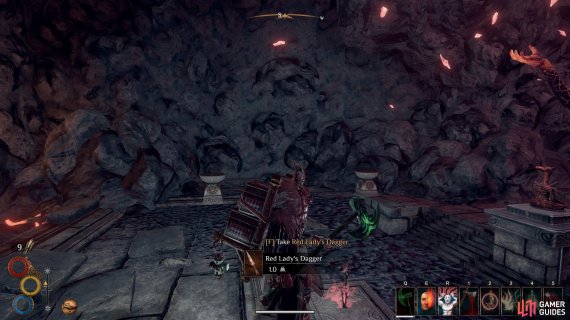 Place the idol on the pedestal in front of the Scarlet Lady. (left), Once you have placed the idol, you will be able to take the Red Lady’s Dagger from a stone platform in front of the statue. (right)

Whichever option you choose, providing the idol to your person of preference completes the quest.