This quest begins once you have joined The Holy Mission of Elatt faction. Once you have completed the introduction detailed in Looking to the Future, you will need to wait three days before you can proceed with ‘Questions and Corruption’ by speaking with Ellinara. Once the time has elapsed (either by exploring the world or by resting continuously), speak with Ellinara.

Note: This quest has a timer of 30 days, which begins once you have accepted the first task of burning a greasy fern at the Vigil Altar.

As part of the first task to complete for Ellinara, you must acquire a greasy fern. If you don’t already have one in your inventory, speak with Laine the Alchemist, who can be found immediately to the south west, to purchase one. Alternatively, you can search for a greasy fern near the Vigil Altar itself, with a number of them growing in the region. 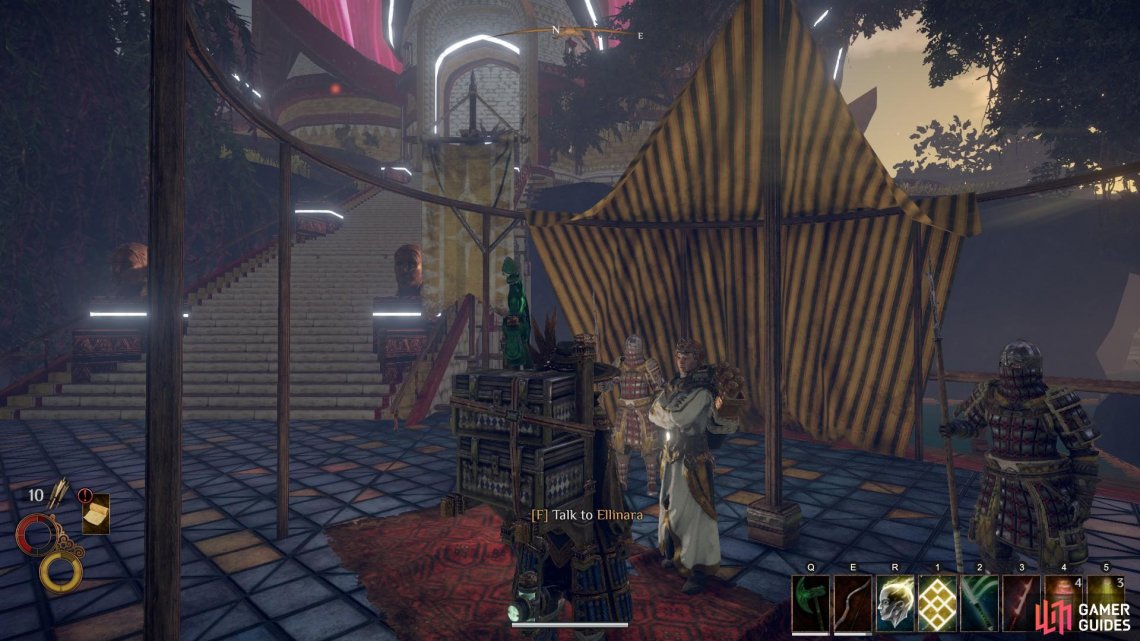 (1 of 2) Speak with Ellinara, waiting south of Elatt’s temple, to begin the quest. 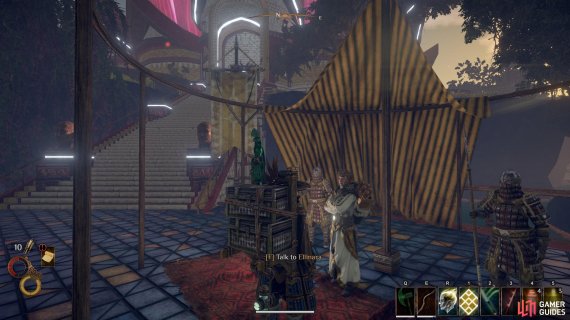 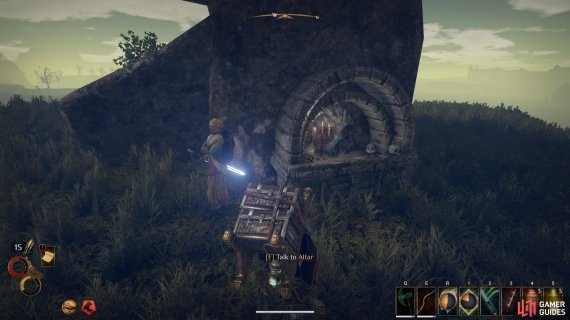 Speak with Ellinara, waiting south of Elatt’s temple, to begin the quest. (left), Head east from the Monsoon docks and up the hill, where you will find the Vigil Altar. (right)

You will find the Vigil Altar at the Vigil Pylon, slightly south and east of the docks to Monsoon. From the docks, head directly east up the hill. You will find Oliele waiting beside the altar, though it is not necessary to speak with her. When ready, interact with the altar to burn the greasy fern. When the induced vision ends, Oliele will speak with you and you about what you saw. It doesn’t matter which dialogue options you choose here; it will not influence the outcome of the story. When ready, go back to Ellinara to learn of the next task.

When you have spoken with Ellinara about what you saw at the Vigil Altar, she will ask you to join Oliele at the Corrupted Tombs in Chersonese. This will require a long journey to another region, so be sure to bring some travel rations. Given the time limit for the quest, it is advised that you immediately make the journey, rather than adventure in the Hallowed Marsh first. Once you are in Chersonese, to reach the Corrupted Tombs you will need to pass through the Ghost Pass and gain access to the north eastern region of Chersonese. This requires completion of the quest A Myriad of Bones.

Note: To ensure the best outcome for the quest, you should choose to help Myriade during A Myriad of Bones rather than destroy him.

Once you’re in the Corrupted Tombs and have completed A Myriad of Bones, you will be able to pass beyond the magic barrier with Oliele.

After passing through the magic barrier, you will find both Oliele and Myriade waiting beyond. If you have reached this point within the 30 day time limit, you will be able to speak with Oliele and defeat several green ghosts to end the corruption. If you failed to reach this point before the time limit, you will need to speak with Myriade and request he that distracts the ghosts. You can then interact with the corruption, at which point you will die and then awaken in the same room. So long as you chose to aid Myriade in A Myriad of Bones, you will only receive the passive ability ‘Sacrifice’, which reduces your stamina by 7 permanently. If you chose not to aid Myriade, you will receive ‘Painful Sacrifice’, reducing your stamina by 15 permanently.

Tip: The green ghosts which spawn after speaking with Oliele are not particularly difficult to defeat on their own, but you may quickly become overwhelmed by all three at once if you fail to position yourself properly. Once you’ve spoken with Oliele, head to the western area of the room and wait for the ghosts to spawn. This will afford you enough distance between the ghosts to defeat them one by one, if you’re swift. You can use the space within the room or the tunnels from which you came to kite the mobs and create natural barriers between them if necessary.

Regardless of the outcome, speak to Oliele to initiate an intervention by Elatt. After Oliele is saved, she will ask to be left alone. You can now return to Monsoon and speak with Ellinara to complete the quest.