Once you have paid off your bloodline debt to Rissa, she will ask you to speak with Yzan and Oliele. Oliele can be found next to the blacksmith, Loud-Hammer, in the town centre. She will bid farewell and request that you join her in service of The Holy Mission of Elatt. She will inform you about where to find her should you wish to join.

A description of where to find Oliele should you wish to join The Holy Mission of Elatt with her.

Yzan can be found on the beach to the north east of the town centre. He will inform you of his intention to join The Heroic Kingdom of Levant. You will have the option to ask to join him, however you won’t be able to go with him at this point. Instead, he will advise how to find him later on.

A description of where to find Yzan should you wish to join The Heroic Kingdom of Levant with him.

Now that you have spoken to both Oliele and Yzan, make your way to the town hall of Cierzo and speak with Rissa. You will find her waiting outside speaking to a couple of guards. Rissa will ask you to join a third faction, The Blue Chamber Collective, providing you with directions for where to find her when you’re ready.

A description of where to find Rissa should you wish to join The Blue Chamber Collective with her.

Now that you have spoken to each person offering you a chance to join a specific faction, you are ready to set out. See the relevant sections in this guide for quests related to each faction.

Warning: Once you have joined a specific faction, there is no going back. The only way to be part of a different faction once you have already joined one is to play through the game again.

There are a few more things you should do before venturing out into the world. First, ensure that you have a cooking pot; this will be essential for staving off hunger in the wilderness. You can purchase a cooking pot for 20 silver from shopkeeper Doran or Master-Chef Arago. Second, be sure that your waterskin is filled from the water purifier on the beach. Third, check your inventory to confirm that you have at least three travel rations available. Finally, ensure that you have an improvised bedroll in your inventory. You will find one in your lighthouse storage room, or you can buy one from Doran for 5 silver.

For the purposes of this section of the guide, we will take our chances with Rissa and The Blue Chamber Collective. To meet her we need to go to Berg, the main settlement in the Enmerkar region. When you leave the town of Cierzo from the main gate, open your map. You will see an indicator leading to the Enmerkar Forest to the south east. 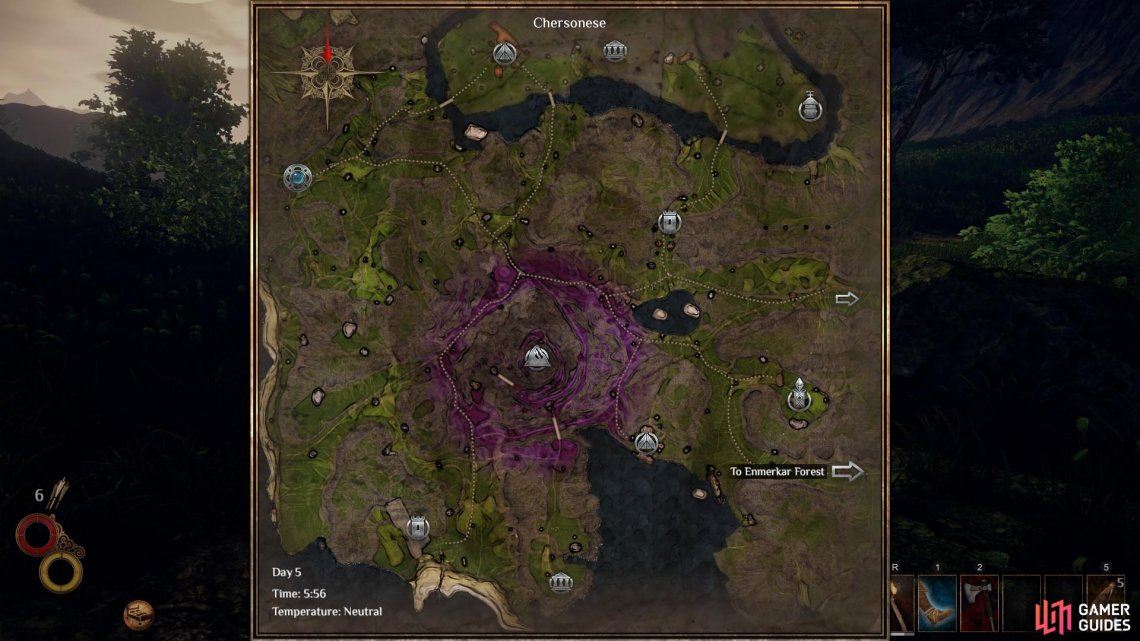 The entrance to Enmerkar Forest in relation to Cierzo in the north west, just below the compass. Note that all major cities are marked by a blue, gem-like circle at the centre of their icon.

Begin by following the path north east of Cierzo. When you reach the crossroads marked in blue on the map below, you will see a sign which reads ‘South-East: Conflux Mountain’. Looking directly ahead from the sign you will be able to see the mountain in the distance. You should follow the path south east until you reach the mountain, looting any resources along the way.

Note: Directly behind the sign you will see two bandits. You can choose to bypass them and be on your way, or you can fight them for silver and loot. If you choose to fight, try to sneak up behind one of them so that you can make the first strike. They will remain together, so it is unlikely that you will be able to fight them one at a time.

Eventually you will come to a fork in the road, turn left and continue on and follow the path up and into the hills above. As you enter the purple foliage you will begin to descend again. Continue walking down the path until you come across a large boulder and a split in the road. Take the path south west for now and follow it a short way until the next fork. Here, turn left and continue walking south east along the edge fo the mountain. 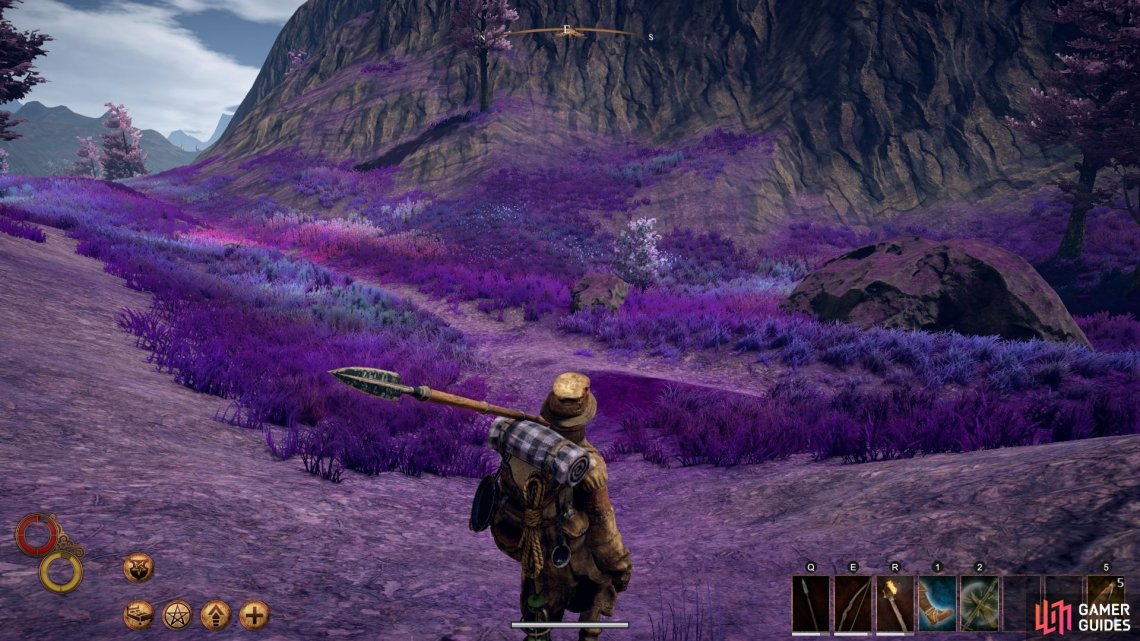 Look out for this boulder at the fork in the road.

After some time you will encounter another break in the path. At this point, turn left and head directly east. You will see a bridge in front of you which is connecting a hill to the mountain. Keep going until you’ve passed under it. On the other side you should be able to see Vigil Pylon in the distance. Follow the path down until you come to another fork in the road. At this point, head north. You should be able to see a fort in the distance, as shown below. 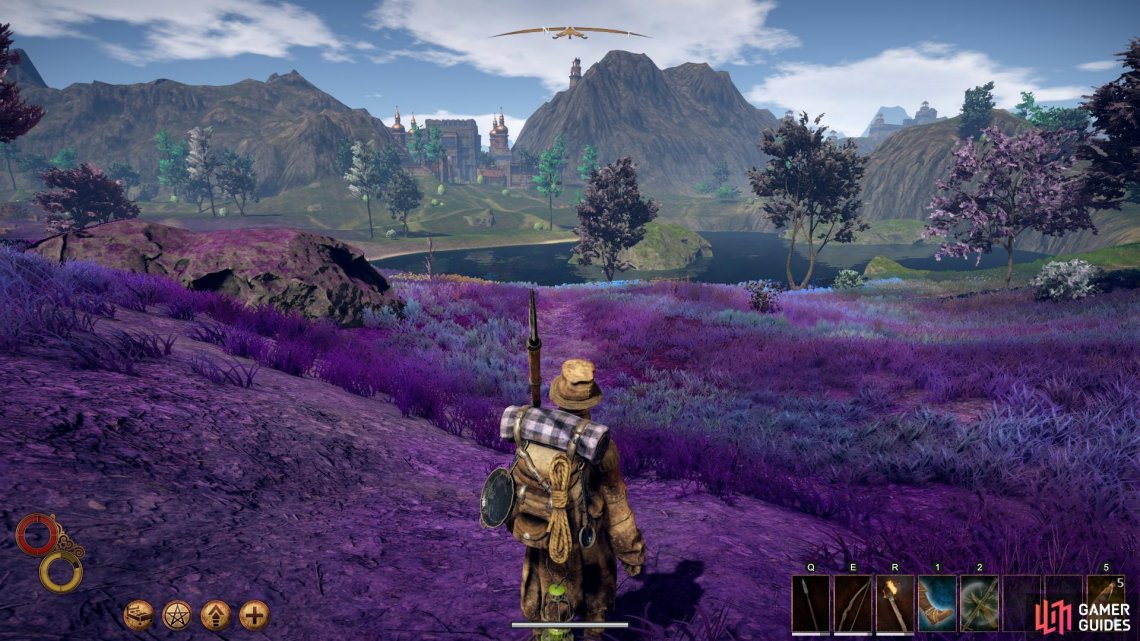 You will know that you’ve come through the correct pass once you see this fort in the distance.

From here, keep walking along the path until you reach its end near the edge of the lake. Now turn directly east and follow the road. You will be nearing the landmark of Vigil Pylon when you come across another fork in the road. Turn south east and keep walking until you can see the entrance of Vigil Pylon. From here, turn south. You will see a shipwreck in the distance; head toward it but keep on the path, which will gradually turn south east and then directly east into Enmerkar Forest.

Now that you’re in the region of Enmerkar Forest, the first thing you should do is make your way to the safety of Berg, the major city of the region where Rissa is waiting for you. Head south west along the main road. You can’t really lose yourself here until you reach a fork in the road marked by a tall tree. Here, turn east and follow the path toward the abandoned docks. When you reach the docks, keep going east and follow the path around them until it ends. Here, turn south east and keep going until you see a large door with blue engravings to the north; this is Berg.

Once you’re inside Berg you will be able to use the city map, locating Rissa by a fountain to the north east. When you speak with her, she will ask whether you want to join the Blue Chamber Collective. Tell her that you’re interested and she will ask you to speak with either Gabriella Sullivan, Sagard Battleborn or Julius Sutherland. Since Sagard was mentioned as one of the most prominent figures in the city, speak with him. He can be found in the Old Coin’s Inn south west of Rissa’s location.

After you’ve spoken with Sagard he will give you a Fire Rag recipe. Open your inventory to learn it. To craft the fire rag you will need one of each of the following:

If you don’t have either item already, leave the inn and speak with Shopkeeper Pleel, north east of the inn. She will sell both items to you for a couple of silver each. Now craft the fire rag and inform Sagard. He will then give his approval for you to join the Blue Chamber Collective. Speak with Rissa and confirm your desire to join the faction and complete the quest. Upon doing so, Rissa will provide you with a key to Cierzo which can be used to access numerous chests in the town.

Note: Sagard will provide you with an alchemy recipe for ‘Spiritual Varnish’. This can be extremely useful if you apply it to your weapon when fighting ghosts in the forest. However, you will need an alchemy set to craft it.