Warning! This is a very lengthy mission, so we’re going to break it down into each area to make each section more digestible.

We need to start this journey in Darkfall Cave (located north of Markarth ), so set your bearings and fast-travel to it as quickly as you can!

Once inside the cave, kill all of the Gargoyle’s and other enemies that cross your path and then walk past the waterfall, kill the Frostbite Spider, press onwards - over the wooden bridge. Immediately double-back over the wooden bridge to cause it to collapse and you’ll be carried further into the cave by the water rapids.

Once you land at the bottom (alongside a bunch of Frostbite Spiders ), hack your visitors to shreds and then follow the linear tunnel path deeper into the cavern.

Search the chest by the bonfire for a nice selection of potions, cures and ammo, hang a right, and keep running down the tunnel until you reach the open area where Serena signifies the approach of enemies when she mentions that she hears something.

There are a few Trolls dotted around this area, so keep your guard up and weapon/magic ready at all times. Further down this cave you’ll find Gelebor at the ‘Shrine of Auriel’. After a lengthy conversation, you’ll discover that there are five waypoints you need to make it through to get to the boss at the end. See? Told you this might take a while… As you head down the passageway, watch out for Chaurus hunter Fledglings who’ll form together and flap around until you put them out of your misery. Be extra careful when you meet the Skulker Falmers as well, as their blades will usually poison you.

Keep pushing through the tunnels; carefully killing all enemies that show their face to you and you’ll eventually reach a wide open room with a couple of ramps on either side. You’ve stumbled into the Falmer’s camp, so be ready to fight a large number of these creatures (who sometimes attack in pairs).

When the coast is clear, you can run behind the waterfall and then you’ll reappear by another small Flamer camp (with a chest in the middle that you can loot). Be careful as there are still plenty of vicious enemies after your blood, so once they’ve all been dealt with; run up the ramp, cross the footbridge, open the gate, run past the statue and then hang a left at the giant crystal pile. 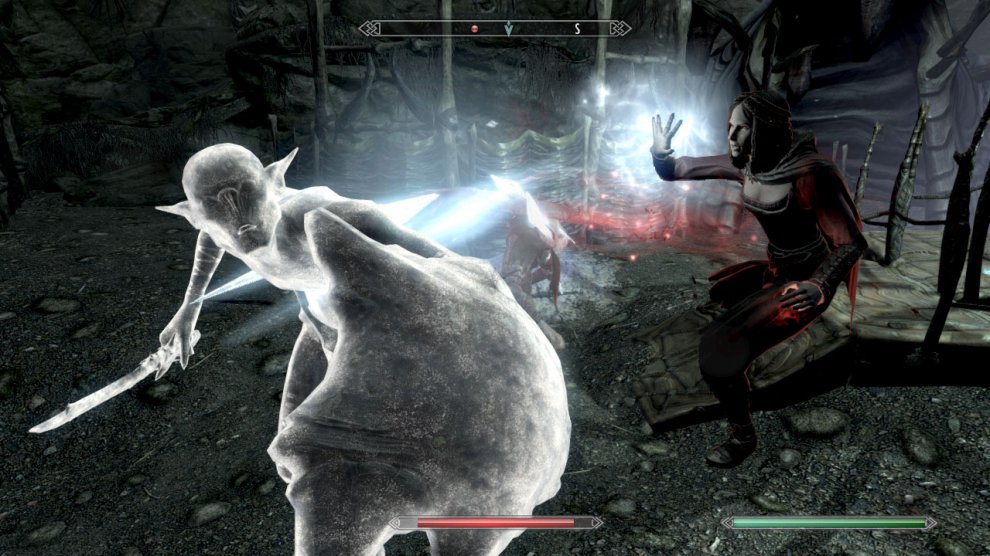 At the end of the long corridor you’ll come out in another Falmer camp; but this time there’s a much harder version known as a Falmer Warmonger (who carries a shield). There’s a chest nearby, otherwise go up the footbridge, run left down the corridor but be very careful when you reach the trap triggers hanging down from the roof (sneak past them).

Once you reach the two ropes, pull the left one to open up the passageway forwards (just be ready for the Vale Sabre Cat that will leap out at you on the other side).

Follow the long winding path down to the bottom of this giant room, then head up the ramps back to the top at the other side (taking care of any Sabre Cats along the way). At the top you’ll reach the next Wayshrine; so speak with Prelate Sidanyis to raise the Wayshine allowing you to enter it, draw water from the basin and then warp to the next challenging area.

The last four Wayshrines are located around this vast valley. However; you can cut the time spent in this area down by taking a sneaky short-cut over some mountains on the far-right of the map (so basically stick right when you run down the ramp and to the bottom of the level). You’ll see the next waypoint right below you, so speak to Prelate Athring .

With that Wayshrine out of the way, exit back outside then turn around and hug the right-hand mountainside as you run to the opposite end until you see an archway on your right. Go up here (killing all FrostBite Spiders in our way) and you’ll eventually walk down a steep slope into another wide-open area.

Take the left route first and when you see the archway up ahead, go left up a small hill where you’ll come across the next Wayshrine, so speak to Prelate Celegrioth to get your next swig of water. 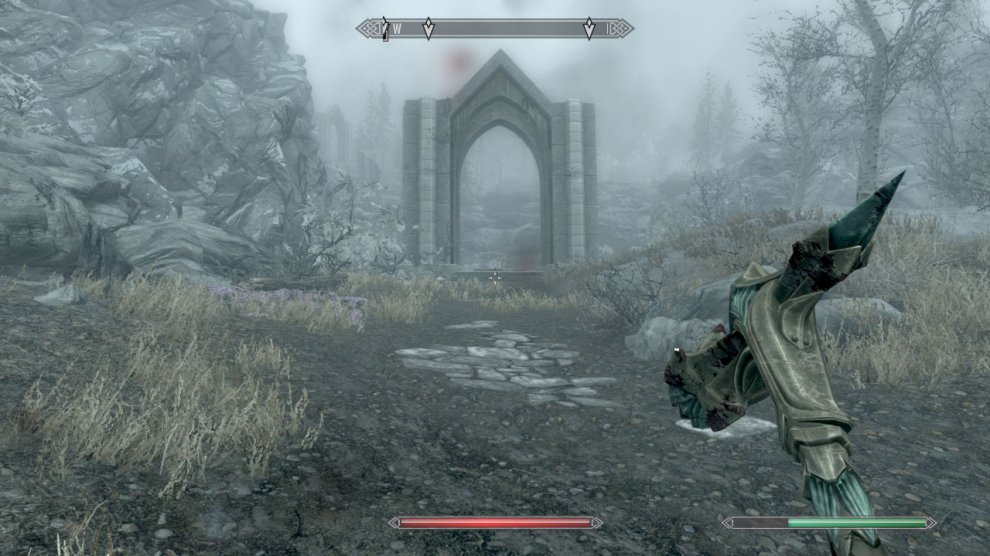 Turn around and make a beeline to the waterfalls in the far distance (in the direction of the next waypoint). Keep running along the riverside until you see the Frost Giant standing on your right (leave it alone unless you’re up for a proper fight).

There’s a steep hill on the left, so go up here then turn a left over the lip of the hill and when you reach the junction at the bottom; go right. Run over the ice bridge at just past the other side is the next Wayshrine with Prelate Nirilor .

Once you’re done, run down the hill, through the archway, and onto the ice lake. To your left there’s an island with a [Word of Power for Drain Vitality] , there’s also a chest here with a magic scroll and some potions to boot. By approaching it you’ll trigger a battle with two dragons known as Naaslaarum and Voslaarum , so make sure you’re combat-ready as you approach! 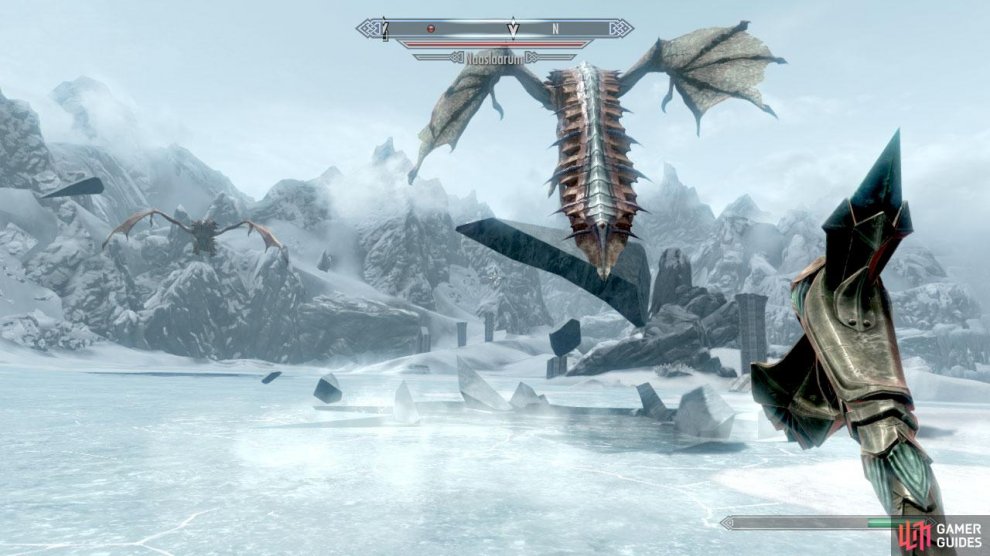 Now turn around, go past the Wayshrine you were just at, when you reach the ice bridge, go left down towards the water and then follow the river around (past the Falmer villages). You’ll see an opening in the right-hand mountain-side for a place called Sharpslope Cave (an unmarked area on your map). Plenty of enemies and loot wait in here if you want to deviate from your current mission.

When you see the waterfall in the distance, cross the water to the left, run up the pathway here and then at the far end you’ll see a massive glacial wall. Kill the two Falmers up here and then enter the cave to the next challenging section.

Thankfully this is a very linear route through this area (but it’s a very long path to run); it’s also littered with multiple Falmers and an Ice Troll near the start.

Just keep fighting and running up the numerous hills and pathways until you reach an ice tunnel that leads back out into the Forgotten Vale (there’s several Falmer villages dotted en-route, so feel free to nip in, kill any of them and loot what you like the look of).

Be careful of the multiple tripwire traps on the ground in front of you and if you head up the ramps here you can loot the numerous Falmer huts for chests and other assorted treasures. If you simply want to reach the next Wayshrine, then you’ll want to stick to the bottom of the ravine and enter the gate here.

Watch out for the tripwire that covers the narrow corridor that leads upwards, it’ll trigger a rockslide that can kill you if you don’t step out of the way and let the rocks past. So kill any enemies you encounter until you reach the Wayshrine where Prelate Edhelbor will raise it for you to take your fifth and final swig of water. 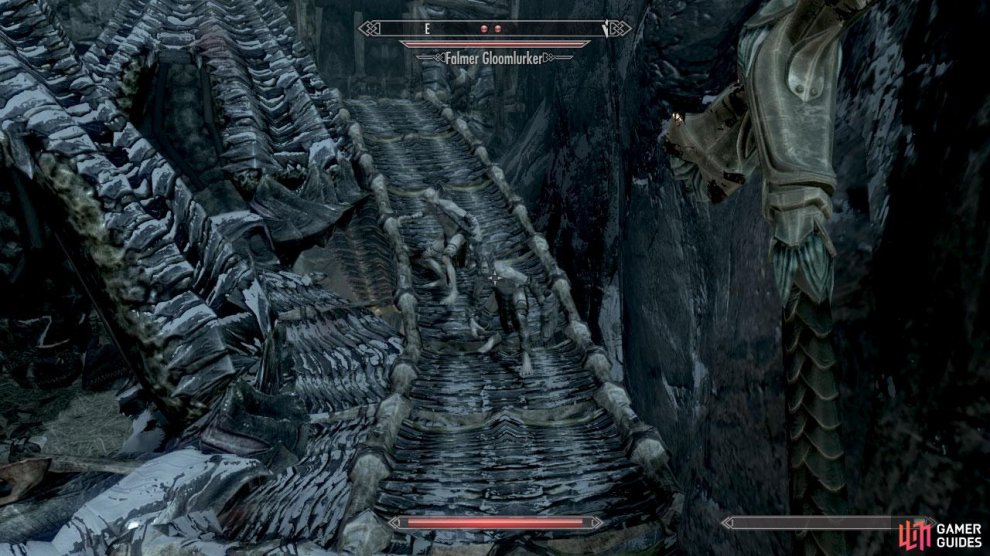 Come back out and run through the stone archway up ahead as this leads directly to the Inner Sanctum. Run up the stairs and pour the water into the basin and wait patiently for the door up ahead to open.

Once you’re inside, you can loot the frozen statues for potions, loot and more. If you activate the statue in the middle then you’ll also be cured of all diseases. Sweet! It’s also really worth picking up all the potions on the tables. If you take any items out of the hands of the frozen enemies most of them will come to life!

Head left, open the door and then keep going around all left corners until you reach an ice tunnel in the top-left corner of a room. Follow this around to the end where you’ll reach Auriel’s Chapel .

We’re not reaching the very end of this mission - PHEW! - So make sure you’ve got your best fire-related weapons/spells/potions at the ready for this upcoming multi-wave fight!

Walk up to Arch-Curate Vyrthur and once he’s says “your usefulness has come to an end”, get ready for combat! You’ll need to kill all the frozen minions that spring into life (so fire-based combat will work wonders here); then he’ll start to bring the house down – literally – so get ready for when he unleashes his Ancient Frost Atronach . 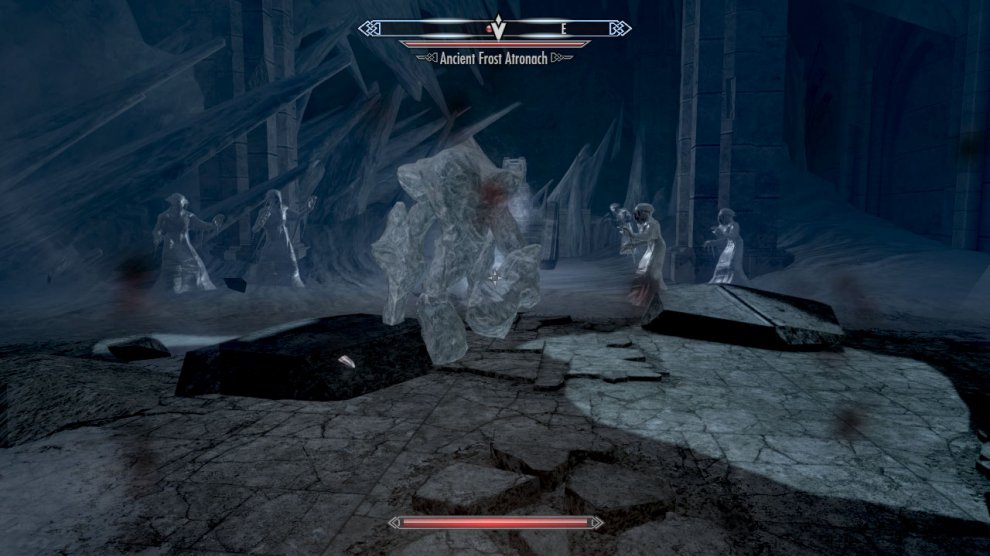 Once he busts open the ceiling to reveal the balcony, approach him and after the conversation he’ll try one final time to off-you. Return the favour by pummelling him with your fire spells/weapons/magic and don’t let up until he’s dead.

Now walk down the stairs, speak to his brother and claim the bow to complete this mission and start the very last one in the main DLC storyline.