This quest can be acquired from any noble that you encounter throughout Calradia. The noble will inform you about a group of troublesome mercenaries which have become a burden to them. They want you to employ the mercenaries and, ideally, find another noble willing to take them on.

Note: You should prioritise this quest once you have it; the longer the mercenaries remain in your party, the more food supplies and denars they will steal. This will have a demoralising influence on you regular troops, eventually causing them to abandon your party.

The best way to find other nobles is by roaming the map in search of their parties. You may be able to find some within settlements, but they are more often found on the road, especially at the borders between kingdoms. If you’re having trouble finding anyone, you can use the encyclopedia by pressing [N] and select Heroes or Clans to search for specific nobles. When you’re on the page for a particular noble, you will be able to check where they were last seen in Calradia, providing you with an indication of where to begin your search.

When you find and speak with a noble, you will need to use your strengths in speech to persuade them to hire the mercenaries. Your strengths will vary depending on the attribute, skill and perk choices that you’ve made, but you will be able to see your best chances of success based on each dialogue option once you begin a conversation with them, as shown below. 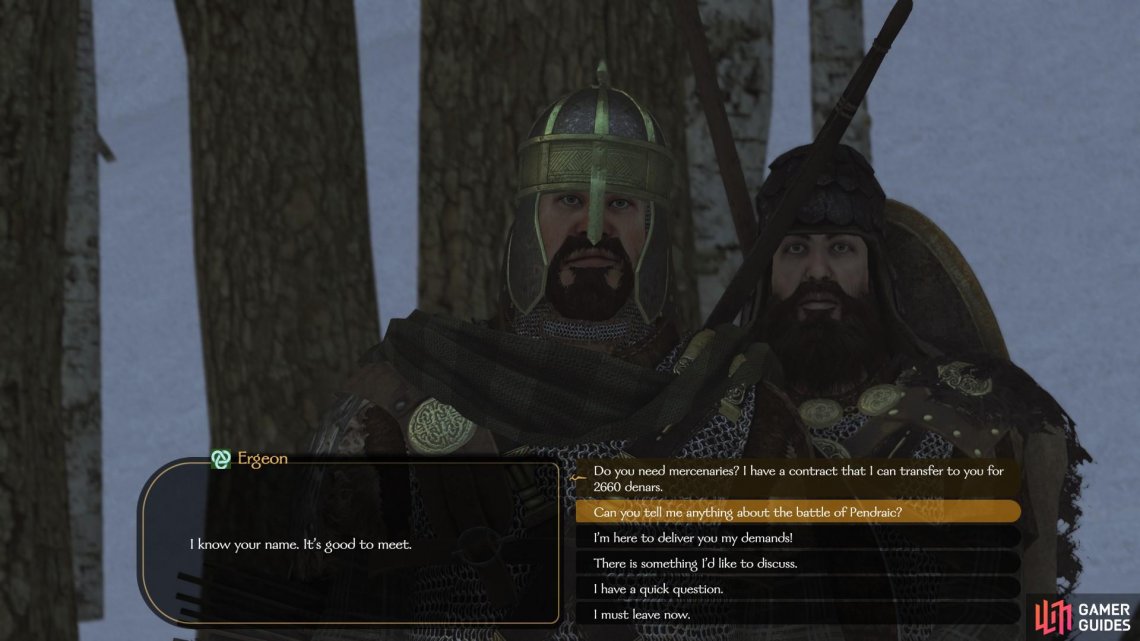 (1 of 2) Persuading a noble to recruit the mercenaries is the ideal outcome, earning you the maximum reward. 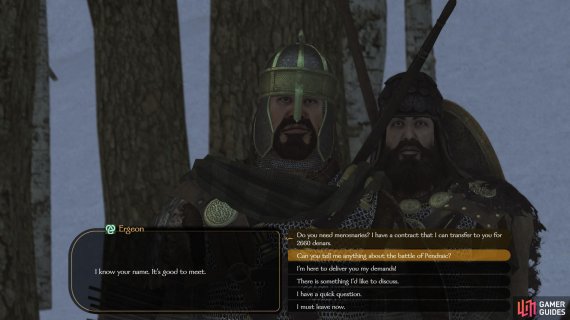 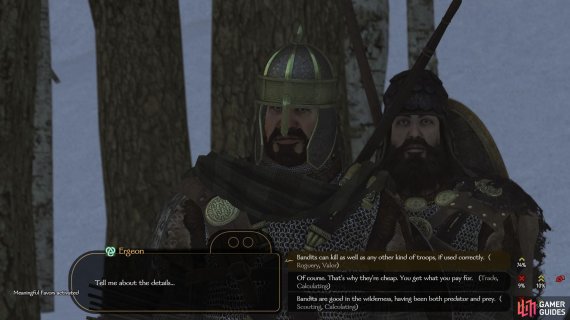 If you fail to persuade a noble to employ the mercenaries, the first thing you can do is reload your game to an earlier point and try to persuade them again. If this consistently fails, try another noble. It is worth trying this method as much as possible, as it yields the most reward in terms of denars and improved relations both with the noble that you took the mercenaries from, and with the noble you sell them to. However, if you have no luck persuading nobles and you just want to rid yourself of the troublesome mercenaries, you can always enter a battle and send them in to fight first. This should gradually deplete their numbers as they die to enemy forces.

Tip: If you decide to rid yourself of the mercenaries by sending them into battle first to be killed, you should disable the surgeon role in the clan menu to increase the chances of the mercenaries dying rather than just being wounded. This applies whether it is assigned to yourself or another hero.

The empire of Calradia is plagued by inner conflict, tearing the structure of the old order as new lines are drawn on the map. The chaos creates a dangerous world, with opportunities to capitalise on the uncertainty of the future. Control trade routes to manipulate production and distribution of resources, join factions to gain renown and influence world politics, or create your own clan to build a world of your own. Whatever path you choose, this guide will help you to understand the intricacies of the Bannerlord economy, combat, factions, skills and perks, tactics, troop types, character builds, smithing system, quests, and much more to ensure that you are never left wondering what to do next, or how you might go about doing it.