When you arrive, you should be able to watch a scene involving the two companies in the Calm Lands you were to advertise for; if you got them each enough points, you’ll get a scene. Otherwise, play minigames for both of the companies until you get over 400 points each, then return to the Celsius and come back for the scene. It’s needed for 100% completion, so deal with it now if you were lazy in previous chapters. You’ll be able to get the Free Pass if you got one company or both to their highest PR level.

It’s best to begin by clearing out some treasures. In the center of the Calm Lands, you can speak with the father of the son who needs a wife. (You’ll get a Speed Bracer for having 30+ points in that quest by now, and an Elixir for any less.) Speak with the father and talk about the 50,000 Gil you could’ve taken; if you took it and are honest about it, you’ll get a Sword Lore as well. The rest of the treasures, for the most part, can easily be found by revisiting various areas in the Calm Lands. The Mounted Assault and Strength of One Garment Grids are found by sending Chocobos whose Heart stats are not 100 to somewhere, fighting seven battles, then going back to the Ranch when the Chocobo returns. You can also buy the Disaster in Bloom and Flash of Steel Garment Grids from the Open Air and Argent companies, respectively, when they hit PR Lv. 5.

When you have the Level 1 Bold Chocobos (left) send them off to the Calm Lands (right).

The rest are found in one last dungeon.

First, to open the dungeon: 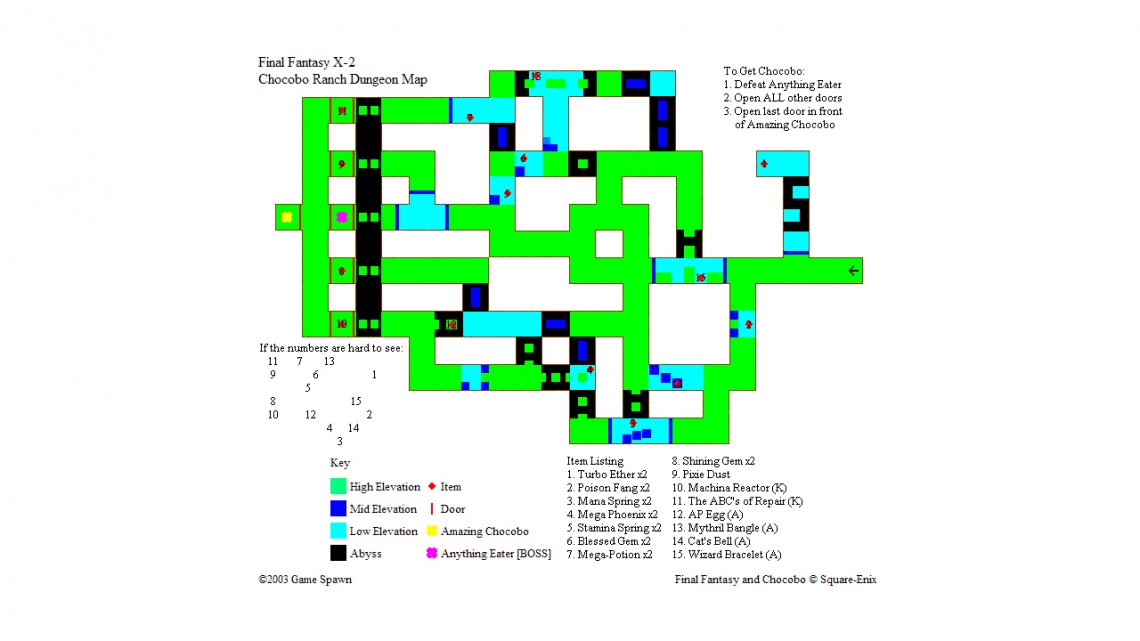 Boss Analysis: In its regular form is when the boss is probably the hardest. Then, Anything Eater will use a basic Attack with an inherent Death effect, Firaga, Blizzaga, Thundaga, Waterga, Flare, and Osmose.

As for the Oversoul form of it? It still will use the “-ga” magic mentioned earlier. However, it will also stop bouncing it off itself because it’ll lose its Auto-Reflect. Instead, it will begin to use attacks on girls wearing particular Dresspheres and also use Dispel to get rid of most of your Reflects you may throw up.

Main Strategy: If you’re fighting the Oversoul form and have something with Auto-Reflect in some way, you win.

Otherwise, begin the battle by using Mighty Guard and then go into a physical offense. As usual, that means Darkness from Dark Knights since it’ll pierce its Defenses, dealing heavy damage. Just note that it is a good idea for those Dark Knights to know Deathproof at this point if you’re fighting a non-Oversoul form of it. After that, it’s mostly just healing and attacking.

At this stage, this guy is easy with your stats. His spells are fairly harmless and the damage from Darkness (right) will be sufficient to kill him in a few turns.

After the battle, notice the wall behind where the Eater was; it’ll rise. Now, think for a moment: remember that door just before you fought the Anything Eater that moved off? There are two more such doors to the north and two more to the south; open them as well. Open the door opposite where the Eater was and you’ll find an Amazing Chocobo beyond and you will also get the Higher Power Garment Grid .

Set two years after the defeat of Sin, Yuna, the High Summoner who brought about its destruction, finds a mysterious sphere of a man who closely resembles someone she thought was gone forever. She sets out on a journey to find him, with help from faces old and new, only to discover the mysteries run deeper than she ever thought possible. Yuna is called on once again to protect the world she loves. Final Fantasy X was Tidus’s story; X-2 is Yuna’s.

The world of Spira may have changed, but we are with you every step of the way! The guide contains the following: