The game will return to Alexandria, where Dagger will soon become the queen. After a few more scenes, you will eventually gain control of Vivi. You will begin right outside of the pub, where you just saw Zidane and his friends. Before you do anything, you will need to know that there’s a side quest at this point that is only available for a very limited amount of time. Hippaul Racing will only be available until you agree to go see Ruby’s play and once you do, it’s gone forever. The reason this is important, at least to those playing the remaster, is that there’s a trophy/achievement attached to this little mini-game, called Track Star.

So, once you gain control of Vivi, go right one screen and you should see the ATE thing pop up in the lower left. View It’s So Big!, then head south until you see Hippaul and his mother on the left side of the street. Distraught over her son’s addiction to Tetra Master, she wishes for him to lose some weight and thinks running will help with this. Agree to race and this mini-game will begin. The point of this is to alternate button presses between Square and Circle (X/B on Xbox, and Y/A on Switch) to move Vivi. There is no penalty for pressing the buttons early, so you can get into a rhythm before Hippolady says go. 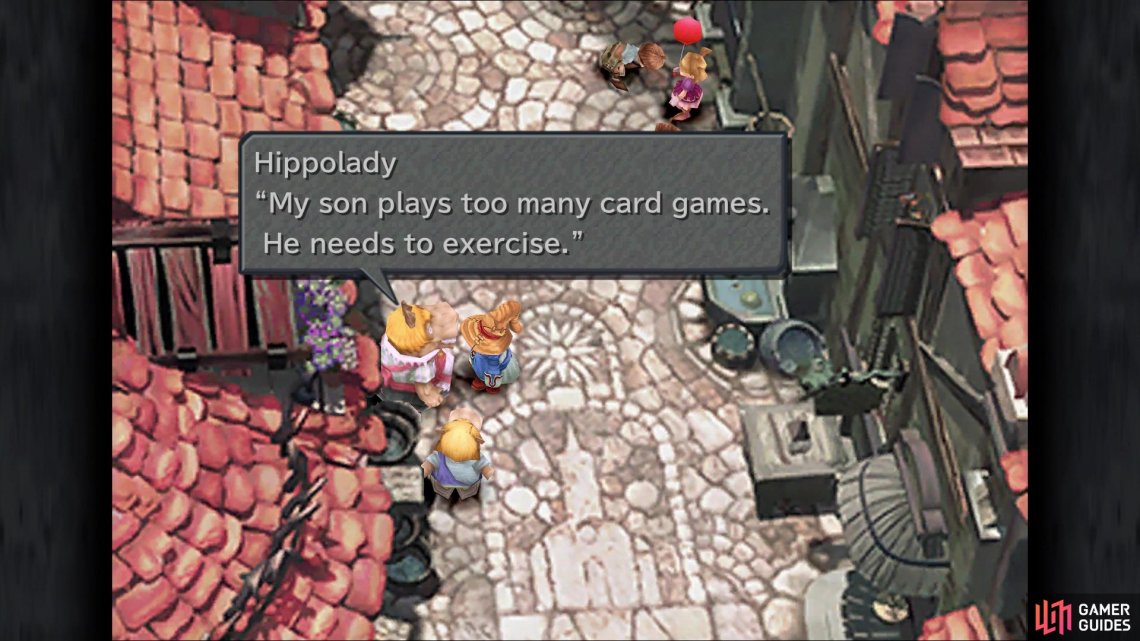 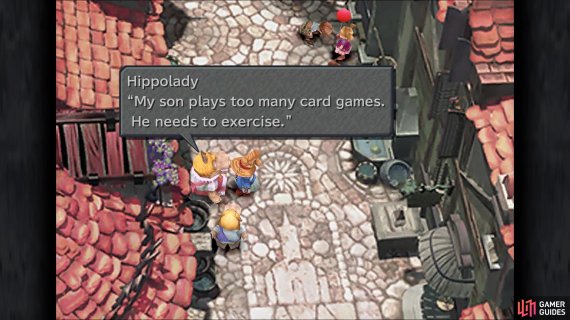 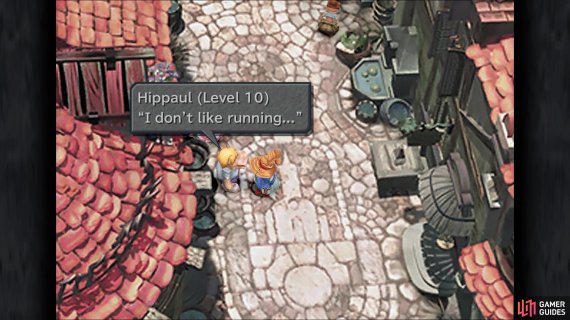 Hippaul starts out at level one and depending on how close the race is, he will gain either a single level (close race) or five levels (if you win by a large margin). For every ten levels, you will win a prize, which happens to be a Tetra Master card. As his level increases, he will become faster, so it might be more challenging to win by a larger margin. Once Hippaul reaches level 40 or so, it does become a bit more difficult to have his level increase by five for each race. Once you get Hippaul to level 80, you’ll receive the key item, Athlete Queen and the trophy/achievement. There are no rewards past that one.

You’re done with Hippaul, so let’s get back to exploring Alexandria this time around. Return to the front of the pub and head left one screen this time, where you should see another ATE popping up (Long Time No See!). On this screen, you can enter a building on the right side, which is the item shop, should you need to stock up on anything. Head back to the screen with the pub to find another ATE waiting for you, To Fly High. Return to the screen with the item shop, then continue forth into the main square area, where one more ATE will show up, Artemicion.

Once that’s over with, head north in the square and exit at the top to find the docks. There are two guards stationed here and you can find two items above them, kind of in the middle of the stairs there, next to the railings; the left one is a Phoenix Pinion, while the right is 3,927 Gil. Return to the square and exit to the left, where you’ll go down a familiar alleyway. Ignore Blank and Marcus here, opting to bypass them and go into the church on the next screen. You’ll find Stiltzkin inside, who will sell you another item set for 777 Gil, this one containing a Phoenix Pinion, Hi-Potion, and an Elixir. 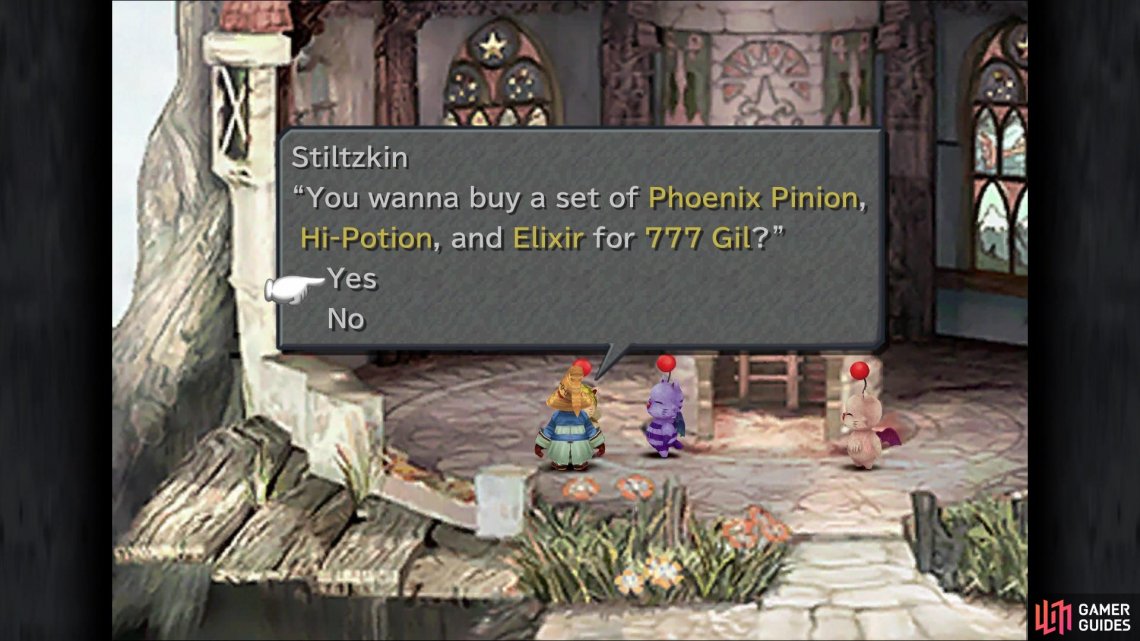 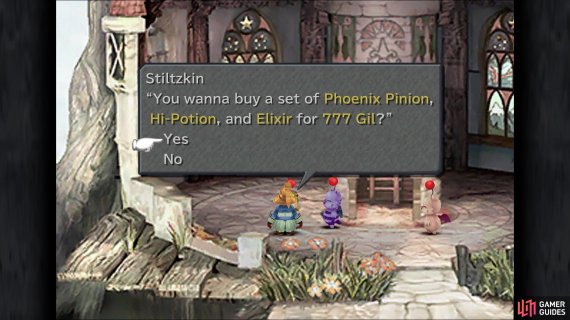 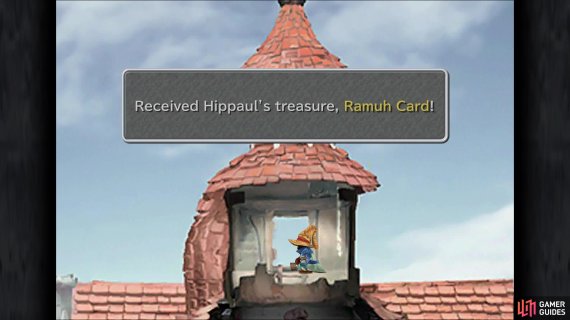 Don’t forget to buy the item set from Stiltzkin while in Alexandria (left), You can get more cards from the bell tower on Disc 3 (right)

Talk to the normal moogle now, Kupo, and give him the letter from Kuppo. You can speak to him again to find another letter, this one delivered by Artemicion, the Mognet Mailman (it’s from Mogrika). Climb to the top of the tower and pull the rope to find some more hidden cards, which is actually Hippaul’s hidden stash. If you failed to get this stash on the first trip to Alexandria at the beginning of the game, then you will also get those cards now; the new ones are the Shiva Card and Ramuh Card.

Important: If you didn’t do the Hippaul Racing mini-game yet, do so now to avoid missing it permanently and potentially losing out on a trophy/achievement. Of course, you can keep a separate save here, should you wish to come back later.

It’s time to finally move on with the story, so backtrack to the alleyway, where you saw Blank and Marcus, and approach Marcus/Blank (kind of in between to trigger Blank to speak to you). Agree to see the play with them to push the story further, then descend the stairs behind Blank. Some scenes will happen, including one with Doctor Tot and Dagger, with him handing her an Opal, Topaz, and Amethyst. These will be able to teach her some new Eidolons to summon, so keep them in mind as you watch some more scenes, before you’re eventually put in control of Eiko inside of the castle. Move north one screen and the game will eventually put you in control of Zidane.

Your goal is to go see Dagger with Vivi, but you can do some side stuff right now to help prepare for later. Exit the pub and you should see an ATE pop up, called I Forgot!. Go to the square and enter the buildings on the right (they are connected) to find the Synthesis and Equipment shops. If you don’t have a Mythril Dagger, purchase one, then use it with the Gladius to synthesize an Angel Bless. This gives him access to the Thievery skill, which has the potential to be one of the better ones in the game. 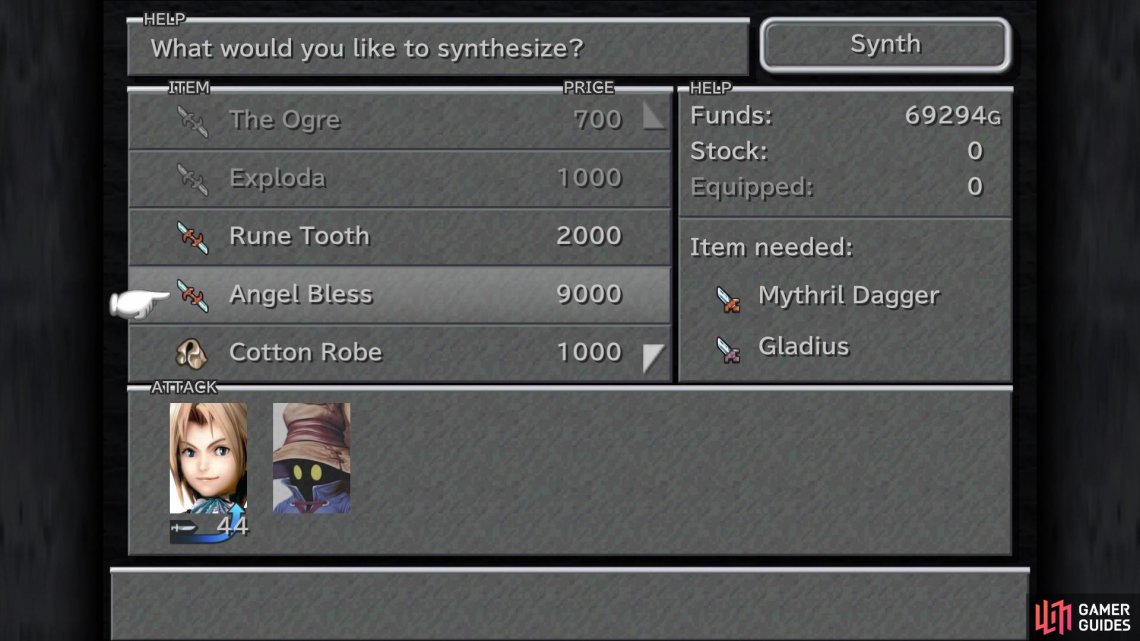 Make sure you synthesize the Angel Bless for Zidane, as it teaches him the Thievery skill

Note: Thievery takes into account the amount of successful steals you’ve done in the game (including from the other members of Tantalus), as well as Zidane’s speed, when dealing its damage. Basically, multiply the above two together, divide by two and you’ll deal that damage, all for 8 MP.

Feather Boots can teach the Auto-Float passive (synthesis), while you might be able to get some upgrades from the equipment shop. For example, the Ice Lance can be an upgrade for Freya (you’ll get her back in a short bit) and the Twist Headband will likely be a minor upgrade for a few characters, as will the Gold Helm (you can synthesize this later, so get an extra if you can afford it). It wouldn’t hurt to purchase another Brigandine, in case your other one is tied up and lastly, there are the Plate Mails. That about wraps up the little shopping trip and if you look closely, you should see three weirdos inside of the equipment shop.

These are Zenero, Benero and Genero, and if you talk to any of them, you can play another mini-game. Of course, there’s another trophy/achievement attached to this and paying 50 Gil will basically start a shuffling mini-game, similar to the cup and balls magic trick. Depending on who talks at the beginning of the round, you will have to follow them and find out where they end up. As you win, the amount you bet increases, but so does the payout. The problem comes with the trophy/achievement, as you have to win nine times in a row to unlock Found in the Shuffle. There’s not much you can do to help, unless you record the footage and play it back in slow motion to find out the target’s position.

Found in the Shuffle

When you’re finished with the shops, head to Ruby’s theater and check in between the two tables on the southern end of the screen to find 2,680 Gil. Return to the square and exit to the north for a scene, with Freya and Amarant rejoining your party. A boat will arrive at this point and if you’re finished in the town, go ahead and take it to the castle grounds. There are items behind the pillars right in front of you once you arrive, one by the right pillar on the left side (Ether) and by the right pillar on the right side (Phoenix Pinion). Go behind the fountain here to find a Lapis Lazuli. 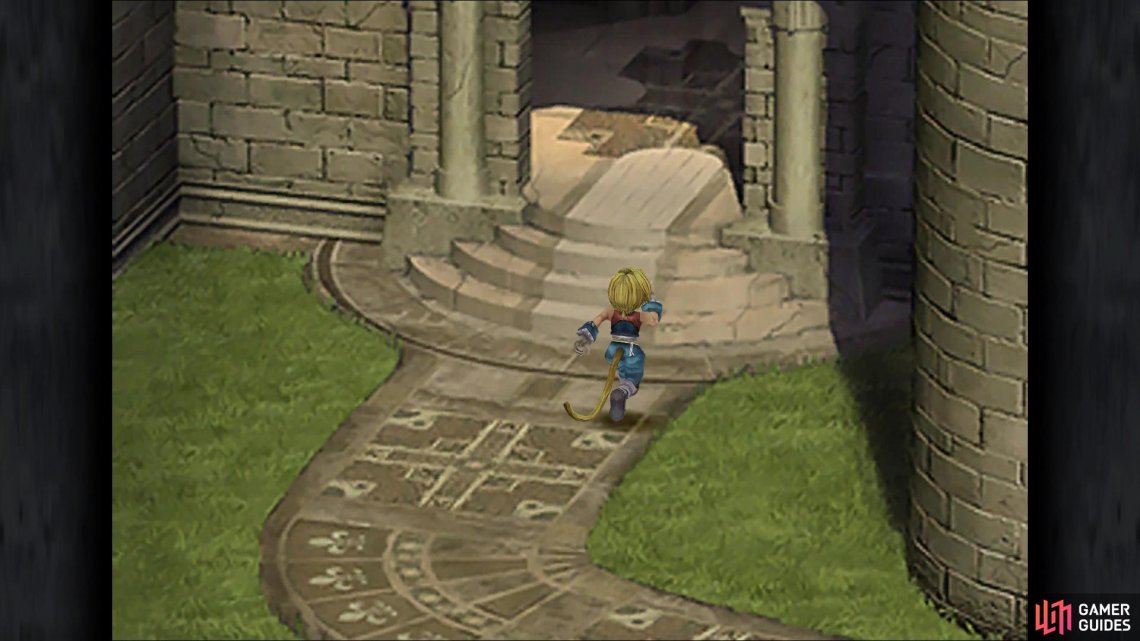 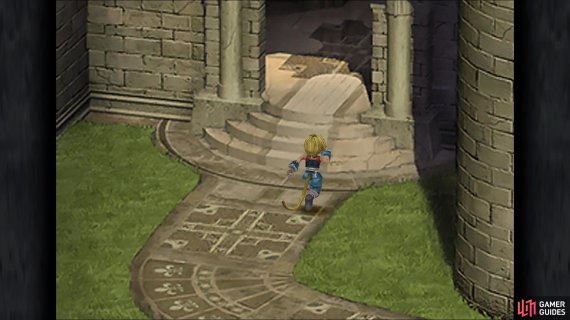 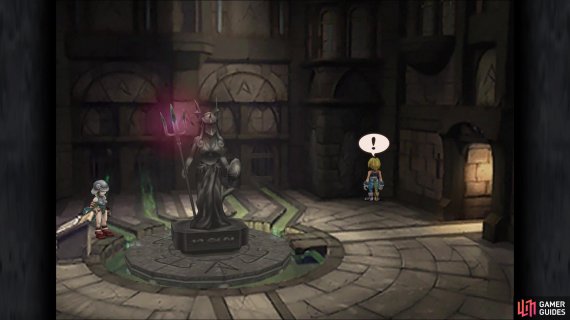 Head into this tower and go through the left door (left), where you’ll find the floating statue and the Leo Stellazzio in the corner (right)

Now, head left and go into the tower, checking on the right side of the screen, near the locked gate, for another Phoenix Pinion. Enter the room on the left to find a statue, but you’re here for the Leo Stellazzio in the top right corner of the room. That’s all for items, so let’s move the story some more. Return to the docks and travel north to witness some more scenes. As they progress, you will automatically witness an ATE called Clowns on a Dark Night. The game will eventually take you to Treno.