Balamb Garden Before the Fire Cavern

It’s been an inauspicious day. Waking up in Dr. Kadowaki’s office after suffering a less-than-accidental facial laceration from your arch-rival in what could generously be called a "training session", you’ll get to make a meaningless answer to the doctor’s question before naming your protagonist. The guide will refer to him by his default name, Squall. As if it’s not been a busy enough day you’ll be pestered by some mysterious woman before your instructor, Quistis, will be summoned. Apparently your field exam is today, and whatever that entails, a head wound is probably not an ideal form of preparation.

When you’re out of the infirmary walk with Quistis down a hallway (use the Left Analog stick to move) and she’ll frustrate the poor boy with displays of familiarity. Once your in the classroom, endure more chatter where you’ll be informed you’ve got free time until the field exams start, and that you need to talk to Quistis.

Note: In most cases you’ll run by default, but if you hold the [Walk/Cancel] button (Triangle by default) while moving with the Left Analog stick you’ll walk instead. 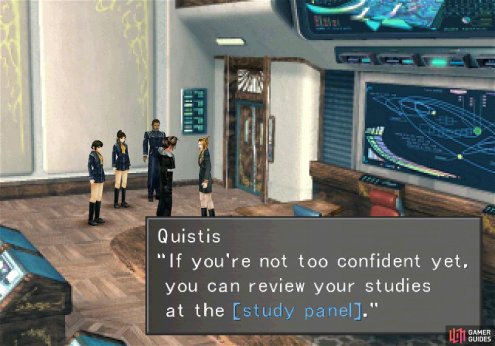 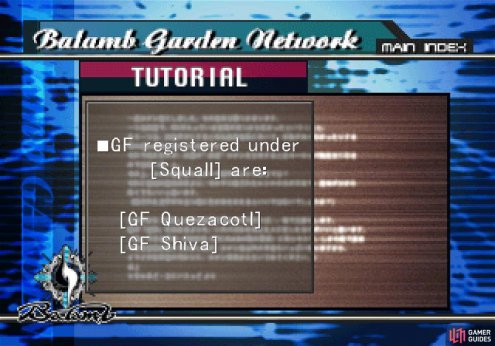 Once you’re in control of Squall, walk forward to transition to a screen where you’ll find Quistis chatting with some students. They’ll scatter as you approach, so talk to Quistis by walking up to her and pressing the [Talk/Confirm] button (X by default). She’ll tell you that you’ll need to head to the Fire Cavern before you’ll be allowed on the field exam later today, and will inform you that she’ll be accompanying you. Wonderful.

She’ll also refer you to consult your "study panel", which you should do. Interact with the three students who were crowding her earlier - the "Trepies", Quistis fans, apparently - if you wish, then return to your seat and interact with the computer there. Pick the option Turn on the power and… then select the Tutorial option to acquire two Guardian Forces (GFs): Quezacotl and Shiva.

Guardian Forces, summons, Espers, whatever you call them, they’ve often played a significant role in Final Fantasy games, and Final Fantasy VIII may be their apogee. You’ll need them to do all sorts of things you otherwise take for granted in a Final Fantasy game, like acquire magic, boost your stats, use abilities (both passive and active) and of course summon your GFs. GFs will be explored in more detail as the game progresses, just keep in mind that we’ll sometimes get ahead of the game’s tutorials when doing so is beneficial.

Anywho, peruse the entries on the study panel if you wish to learn a bit of lore about the world, specifically the purpose of your school - a military academy that trains children to be mercenaries. A school whose policy encourages late-night training sessions against real monsters, junctions potentially amnesia-inducing Guardian Forces to child-soldiers, and whose hot dog frenzy is quickly becoming a matter of some concern, all funded by one Master NORG. Yeah… normal place. But at least "sexual promiscuity" is an expellable offense!

The Transfer Student and the Starter Deck

Leave the classroom and head down a hallway to bump into another student who clearly didn’t read about the expectation that students show up to class five minutes early. If you pick the options Are you okay? and Sure you’ll give her a tour of Balamb Garden, which may be useful if you’re unfamiliar with the layout. If you’re gruff or turn her down, however, nothing of value will be lost.

Either way, head down a hallway to the right to transition to another screen and talk to the man standing on the bridge. He’ll offer you some cards, a starter set for Final Fantasy VIII’s card game, Triple Triad. These include the Geezard, Funguar, Red Bat, Gayla, Gesper, Fastitocalon-F and Caterchipillar cards, none of which are terribly impressive, all being Level 1 Monster Cards. That being the case, you probably want to refrain from playing anybody just yet. Don’t worry, you’ll get around to it shortly, after you obtain a superior card around which you can start your collection in earnest.

Note: If you talk to characters with the secondary [Talk] button (Square by default) you’ll challenge them to a game of cards. Again, with your starting deck your odds of beating most any player you come across are slim, so you’re encouraged to leave well enough alone for now. 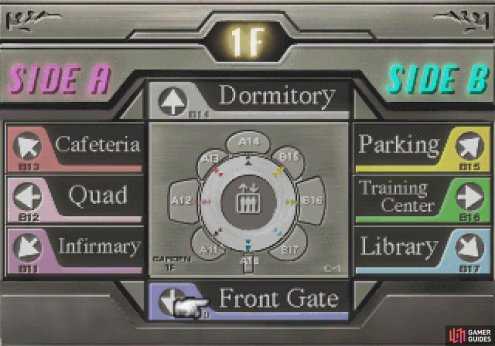 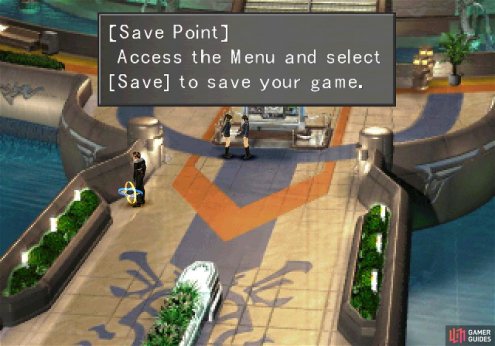 Continue to the right to reach an elevator and ride it down to reach the 1st Floor Hall area. Whether you brought the girl with you or not, your goal is the same - descend some stairs and note map opposite said stairs, which you should examine. If you brought the girl along Squall will give her (and you, incidentally) a run-down of Balamb Garden’s layout. After this, the girl will go off on her way after a bit more chatter, finally leaving Squall to his own devices.

Balamb Garden is fortunately very easy to navigate. You’re in the hall between the front gate (where you’re supposed to meet Quistis) and the elevator to the 2nd Floor. From here you can head either right or left and follow the hall as it loops around in a circle. The areas you’ll encounter if you head left (going clockwise) are the infirmary, the quad, the cafeteria, the dormitory, the parking lot, the training center and the library. There are bridges running off from the main hall to each of these areas, so it’s easy to find them, and if you’re still unsure of where you are, there are signs at the start of each bridge.

Draw Point in the Library

Most of these areas are presently uninteresting, but there is a bit of gains to be made in the library. Make your way to the right (counter-clockwise) to the next screen and cross the first bridge you find to reach the library. Once inside, continue right until you run into some bookshelves, at which follow the bookshelves towards the wall to transitions screens. At the bottom left of the screen you should notice some purple lights, which just so happens to be a draw point.

Magic in Final Fantasy VIII is somewhat odd in that you don’t so much learn spells as you acquire them from external sources. This magic can then be stockpiled like any normal inventory item, accumulating in stacks of 100. Naturally casting these spells reduces your stock (one cast, one spell), but they can also be used for other purposes, like passively boosting your stats. You can worry about that later, but for now know that drawing magic isn’t something most humans are innately capable of… but a human junctioned with a GF is.

That being the case, bring up the in-game menu by pressing the [Menu] button (Circle by default), select the "Junction" option, then select Squall. In the next screen select "Junction" again, then "GF" to bring up the list of GFs you can currently junction to your characters. Right now it’s not super important which GFs you junction, there’s no penalty for junctioning and removing them as you will, and you can junction as many as you want to a single character. Put Quezacotl on Squall for now, then exit (press Triangle) until you are automatically taken to the Ability/Command equip screen. Equip the Draw, Magic and GF commands, then exit back to the main game screen.

Now that you have a GF equipped, interact with the draw point again and you’ll be able to identify - and draw - the spell there. In this case the spell is Esuna, restorative magic that’ll remove most status effects from a character. Hopefully something you won’t encounter yet, but it won’t hurt to grab it. Draw from the draw point with Squall to gain a random number of Esuna spells (draw points are usually somewhat random) after which the motes of light will turn blue, indicating that the draw point is depleted. Most draw points will restock in time… this one being an odd exception to that rule, but whether it normally refilled or not, you’ve gained all you can from it for now.

Note: Draw points restock over time, and by "time", we mean based on how many steps you’ve taken. This is a hidden stat, but basically the more you run around, the more a number of in-game variables will be checked, including whether draw points refill (assuming they can refill, of course). This occurs roughly ever 10,000 steps.

Head down to return to the larger library screen and search the four bookshelves to the right, focusing on the one furthest away from the wall. It can be a bit tricky to find, but when you get the right spot you should pick up Occult Fan I, one of four magazines that details how to find an optional GF. It’s still quite a long ways away, so don’t worry about it too much just yet. 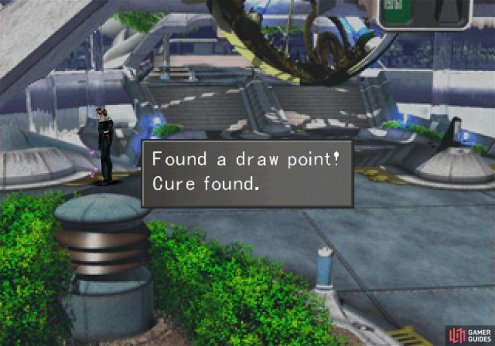 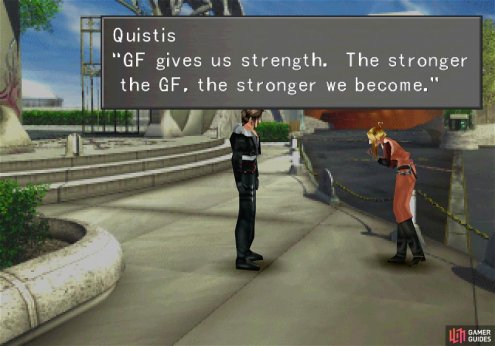 With that obtained there’s nothing more for you to do in Balamb Garden for the moment, so return to the main hall area between the elevator and the front gate and from the map you consulted earlier head down and to the left to find two revolving rings of light, one blue and one yellow. This is a save point, whereat you can - you guessed it - save your game. Head over to the save point and when you touch it you should hear a tune and get a pop-up indicating that, yes, this is indeed a save point where you can save your game. Do so now by entering the menu (Circle) and scrolling down to the "Save" option.

Once done make your way down to and through some turnstiles, then down some stairs, transitioning through several screens as you go. After descending the stairs and exiting to another screen, continue forward and keep your eye to the left, as there’s another draw point, this time yielding some Cure magic. It might not be very generous, but hey, something’s better than nothing. Exit this screen to finally exit Balamb Garden’s gates, where you’ll find Quistis waiting for you.

Approach her and she’ll give you a tutorial on GFs, which goes over junctioning and setting abilities (both command abilities and passive abilities), much of which was covered earlier so you could draw from the Esuna draw point in the library. After the tutorial Quistis will join the party, and the difference between a SeeD instructor and a student on the verge of graduation is… apparently one level? Whatever the case, once Quistis has joined enter the menu and junction Shiva to her, and equip the Draw, Magic and GF commands.

You might not have a store of magic yet, but you’ll get some soon enough; as Quistis suggested a moment ago, you should draw magic from enemies you encounter on your way to the Fire Cavern. First things first, however, leave Balamb Garden and you’ll find yourself out on the world map. Finally, sweet freedom!