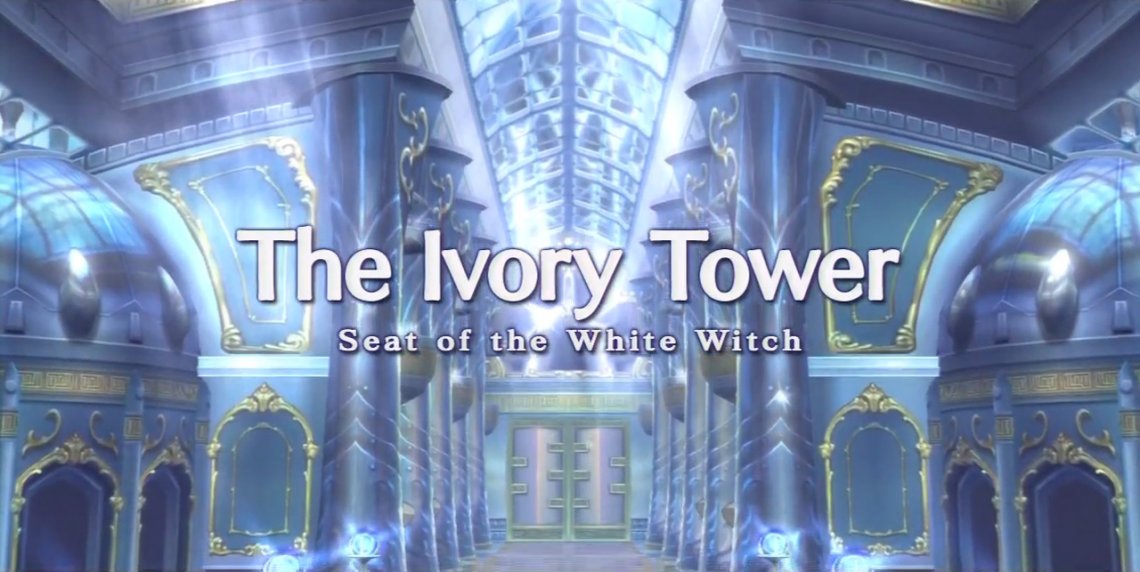 Talk to Pea when you’re ready to depart with Tengri. The Ivory Tower is located on The Spring Realm, on the southwest of the world map. Tengri can only land at the drawing of a bird in the southeast corner of the island, so you’ll have to circle all the way around this isle to reach the actual tower. Right before entering you’ll notice a faded picture of another bird; use Rejuvenate to restore it, creating a second landing platform for Tengri. After creating a Bridge, enter Ara Memoriae.

Put the three flowers inside the pots and inspect the altar in the middle. Naturally, cut scenes will play. Speak with Kublai afterward and rest up. After this, speak with Marcassin (twice) to begin an assault on the Ivory Tower. Oliver and crew will enter the tower with Tengri, whom you can always speak to if you want to leave the place.

There are a lot of great items to be found here, so it’s well worth exploring the entire area, opening all chests. We’ll start exploring the west section first. From the waypoint at the end of the main hall, head west. At the north end of the first hall way is a purple chest that contains [GRIFFIN’S TALONS] , which are great claws. 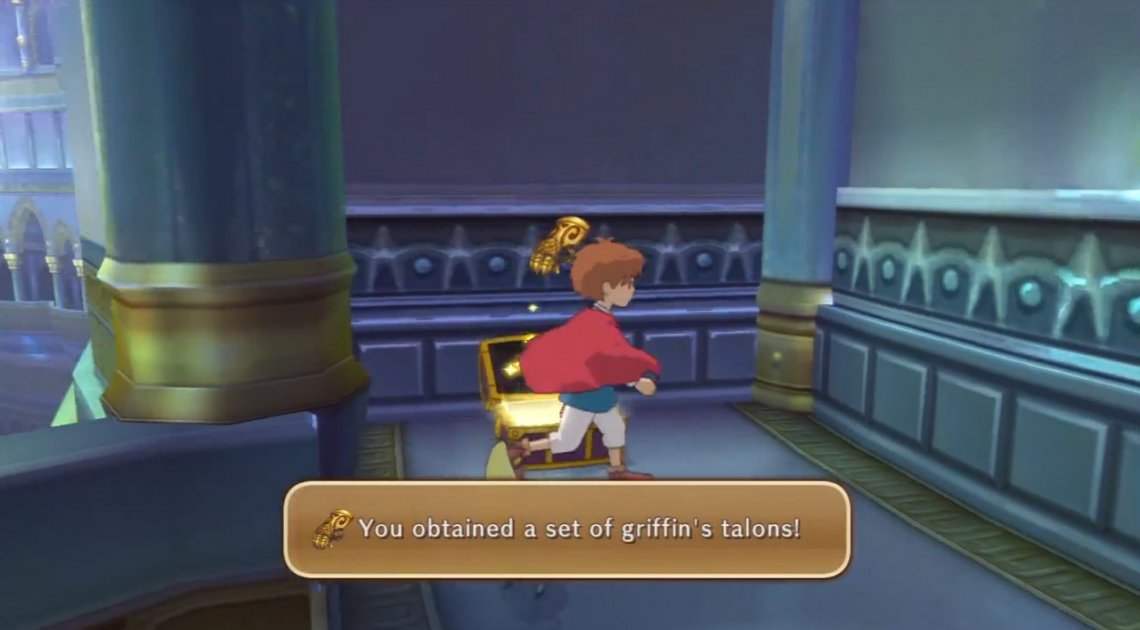 Continue to the far southwest of the hallways to find a chest containing [CELESTIAL ARMOR] , which is a great piece of equipment. 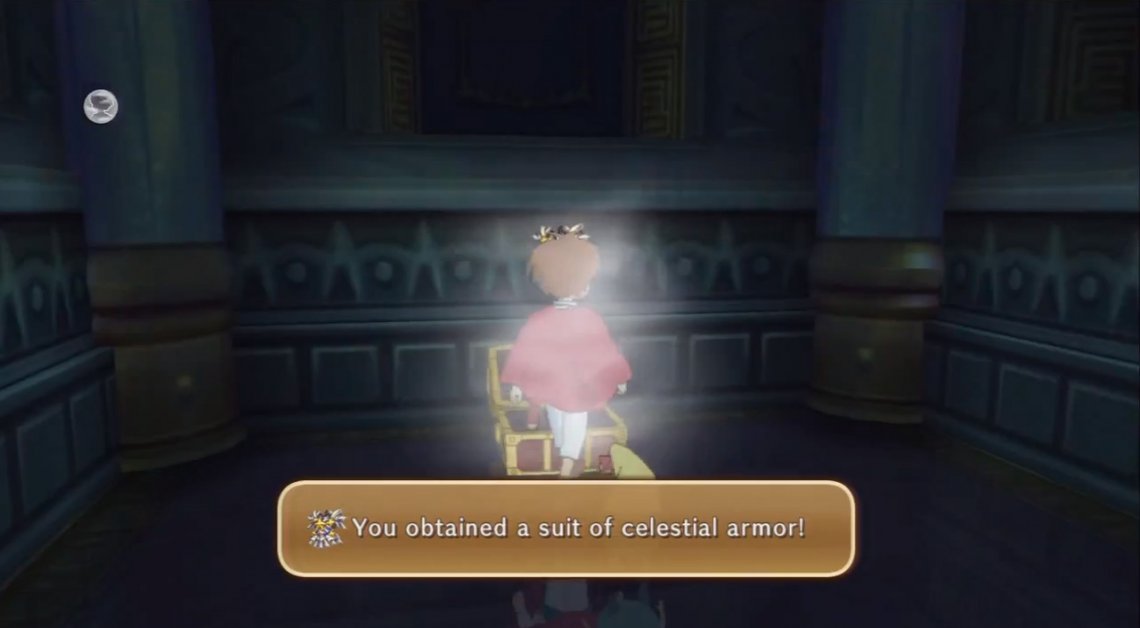 he dead ends to the north and south don’t house any chests, but there’s a teleporter to the northwest that gives access to a balcony containing a chest with a [GREAT SAGE’S SECRET] inside. Return to the waystone in the main hall (as you’ve fully explored the western section of this floor). 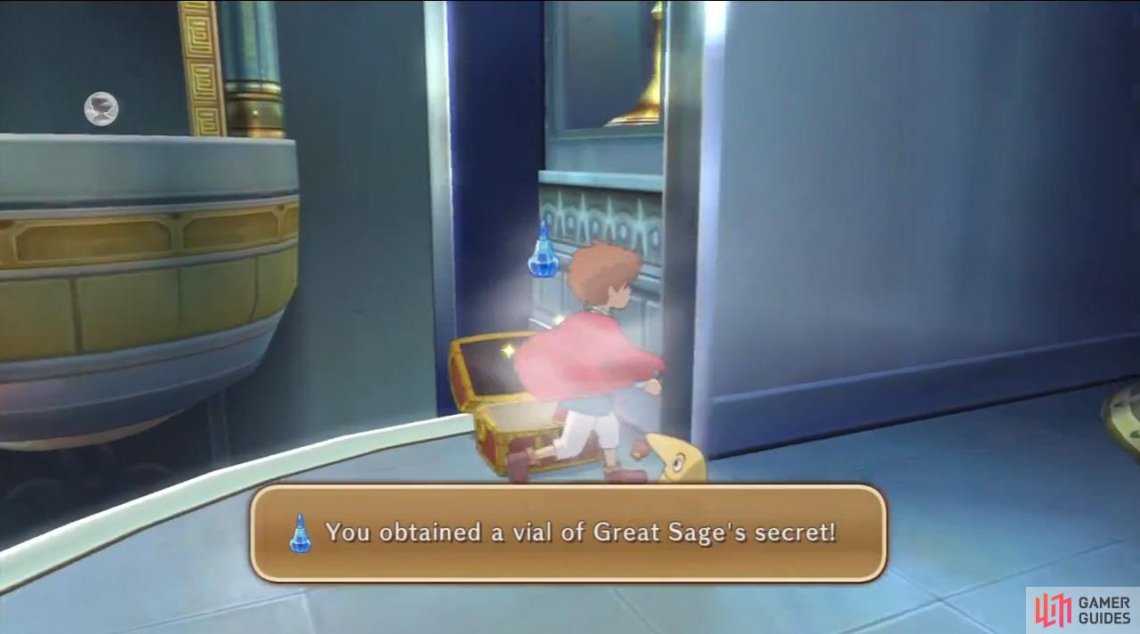 From the main hall, head east, and at the intersection continue to the teleported in the far northeast of the area (the southeast teleporter leads to a vacant balcony, and there are no other items in that area either).

From now on, some Magimechs will activate and attack you. They’re rather strong, so if you want to avoid them it’s best to cast the Veil spell when entering hallways with Magimechs.

After using the northeast teleporter, head to the far south of this hall to find a regular chest with [SPRITE DEW] inside. Continue west and explore the far north of the walkway to find a chest with a [PHOENIX TEAR] . 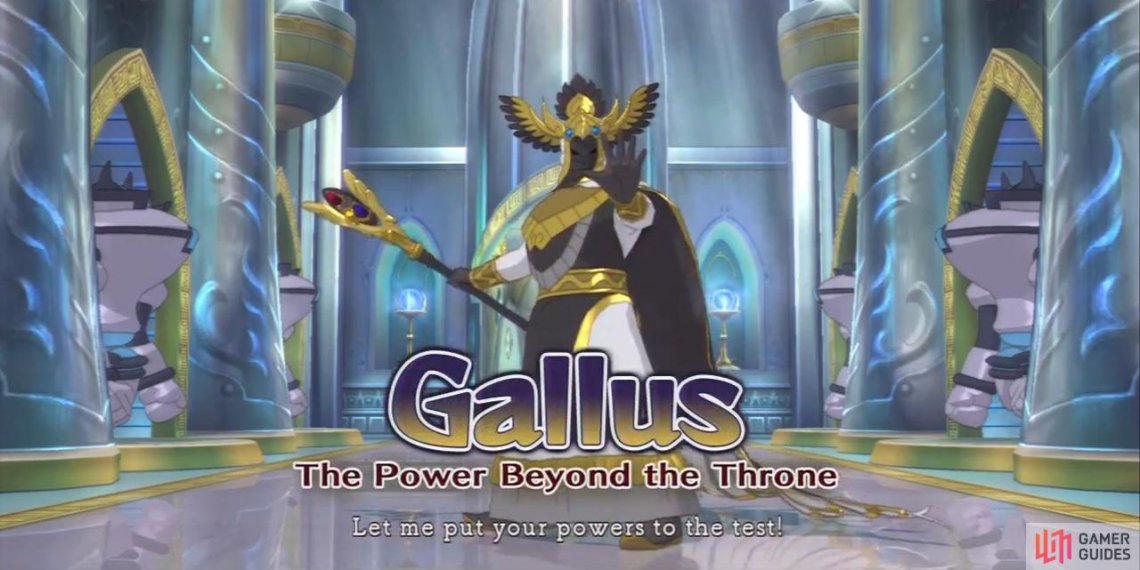 The fight with Gallas shouldn’t be too hard if you know what you’re doing. Gallus will change the color of his aura after a short while, and depending on the color he’ll also change his primary attack spell. If his aura turns red, he’ll use Fire Trident and becomes resistant against fire but weak versus water. If his aura turns green he will become resistant against storm but weak to fire, and he will use the Bolt of Judgment attack. 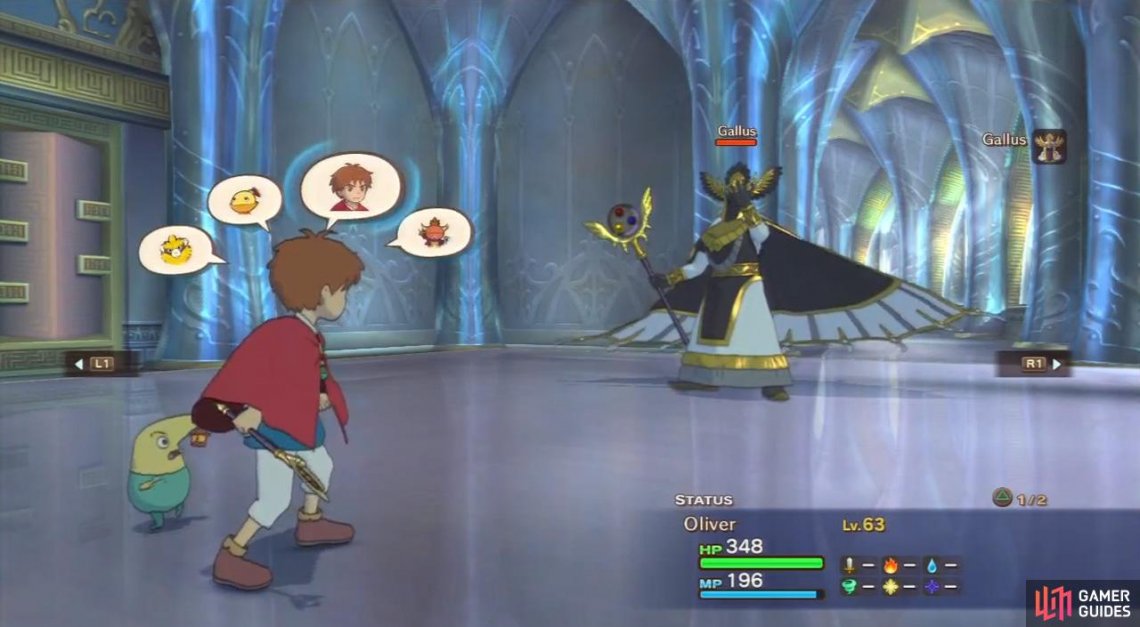 Lastly, if his aura turns blue, he’ll be resisting water-based attack but become weak against storm tricks. He’ll also use his more powerful attack by far, Absolute Zero (naturally aptly named). When Gallus changes his aura to blue, immediately order an All-Out Defense until he changes to a different color again, and be sure to defend against it with your currently controlled character to minimize damage.

Make sure your familiar has access to the Defend option during this time. When he changes aura again, immediately switch to an All-Out Attack in the hope of cancelling one of his (weaker) attacks.

After the battle you’re receive [ASTRA] , an immensely powerful wand, stronger even than the Mornstar. 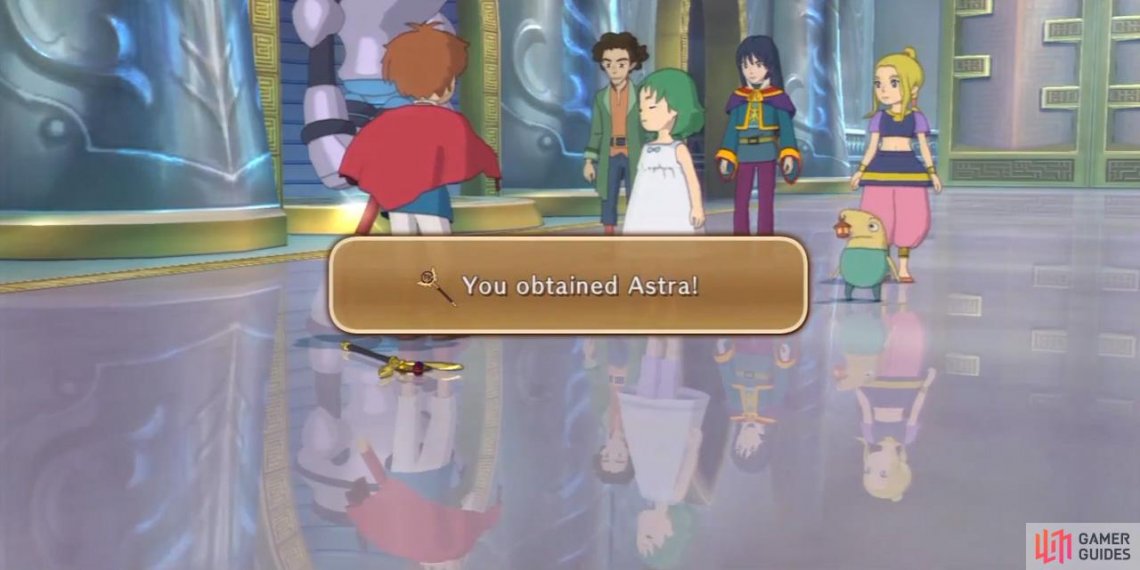 If you’ve solved all of Horace’s riddles so far, now is a great time to backtrack to Ara Memoriae, where you’ll find… Horace. Solve his riddle (the answer can be found on page 117 of the Wizard’s Companion, and is of course ‘Wizard’s Robes’) and he’ll give you the incredibly strong [ASTRA SPELL] , which will surely help in the final battle.

In any case, save your game at the last waypoint and use the teleporter to the north to reach the tower’s next floor. First explore the eastern section; follow the first walkway to its southern end to find a [NOSTRUM] . 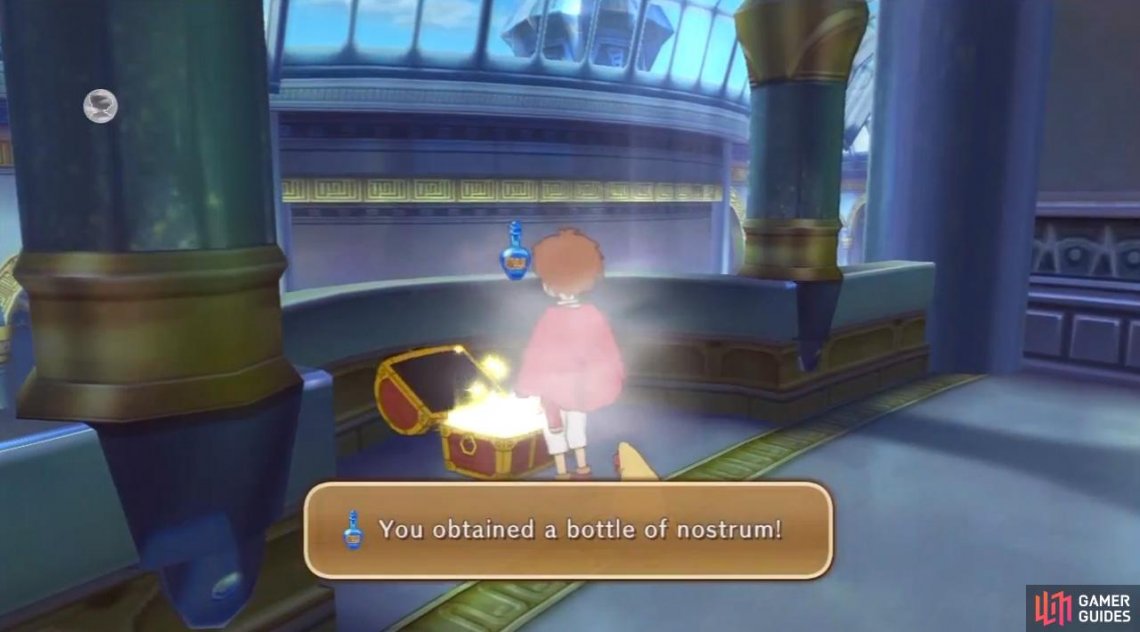 There’s a blue chest in the far northeast of the area that contains a [WYRMFANG RING] . 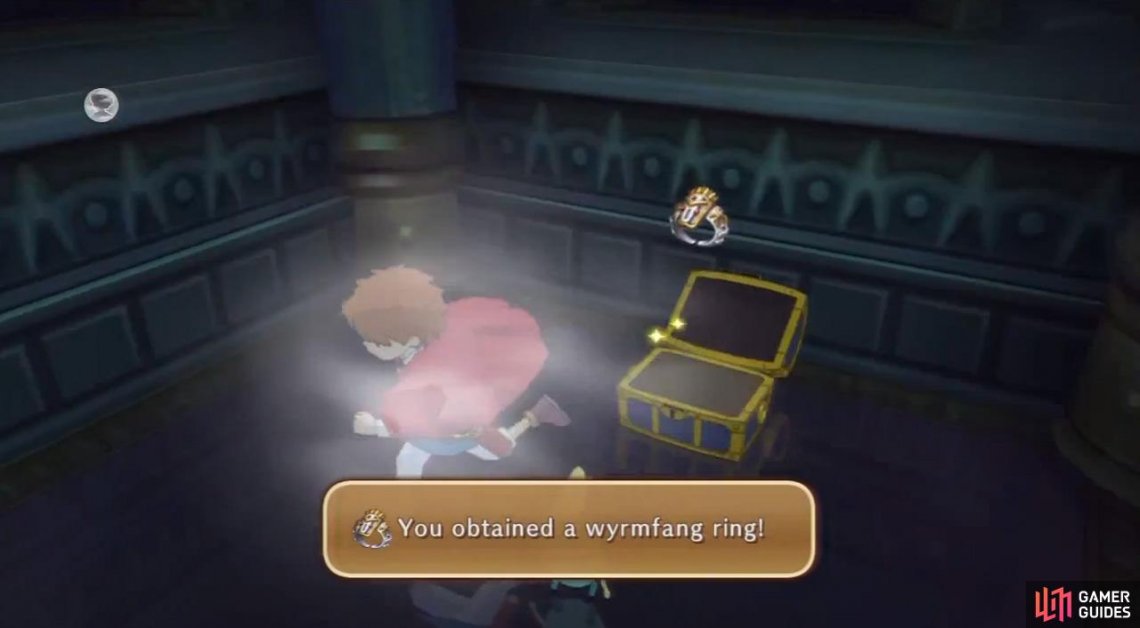 Head to the western section of this floor and continue to the second walkway towards the west. Explore the southern dead end of this walkway to find a [TONIC] , then head for the western hall and use the teleport at the southern end.

Continue east and loot the chest to the far south of the walkway for a [SORCERER’S SOUL] . Don’t miss the ledge to the northeast, which leads to a chest with the ultra-rare and unique [WIZARD KING’S SECRET] !

It appears that there are only two Wizard King’s Secrets in the entire game. If you are aiming for a ‘Perfect File’, don’t ever use it, but keep it with you at all times (just because the flask is so pretty, for example). This includes the final battle, since there’s a post-game.

If you see a Tokotocold around this area, immediately cast Veil and attack them. They’re rather rare, but give a whopping 24000 EXP points, the highest amount in the entire game. You can run up and down this hall to respawn/replace enemies, so you don’t have to fight any other creatures in order to specifically spot a Tokotocold enemy.

Use the teleport at the far north end to reach the final hallway of the tower. Save your game at the waypoint and prepare yourself for three consecutive battles that aren’t going to be easy.

The fight against Cassiopeia isn’t too easy, but since she has a low amount of HP, it’s important not to fight too defensively either. Cassiopeia will attack either offensively or defensively depending on the color of her stripes. Red indicated an offensive stance, while blue marks a defensive stance. 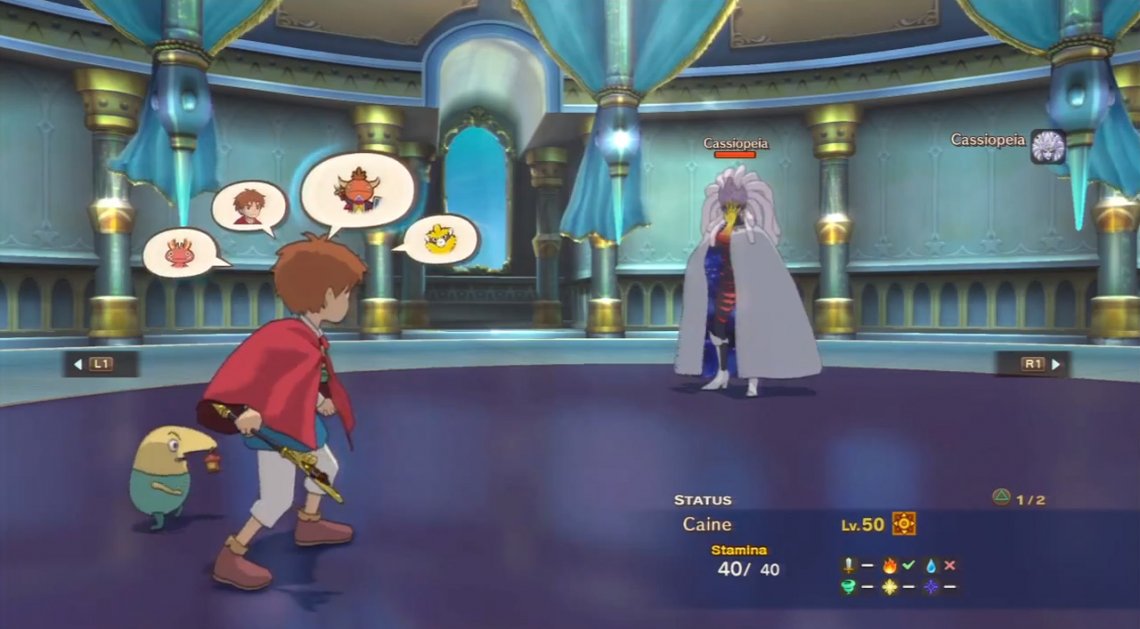 You’ll want to perform All-Out Attacks when there’s little risk of getting hurt by Cassiopeia’s most powerful attack, Fallen Star, against which you’ll always want to defend (and have an All-Out Defense already going). If Cassiopeia has her blue stripes on, certainly use All-Out Attacks; conversely, if her red stripes show, play defensively and use All-Out Defense along with healing. As soon as Fallen Star is being prepared, Defend yourself against it to minimize the hurt.

Her other attacks are fairly strong, but not nearly as worrisome. Star Bolt is easily defended against, her physical attacks can be avoided by casting spells from a distance, and Pillars of Darkness is a powerful attack but you can see where it’s going to hit. Do be sure to defend against it if possible.

Nightshade is actually a change in temper, and you’ll want to go All-Out while she casts this, but afterward it’s best to keep playing defensively until the end of the battle. As the end of the fight draws nearer, heal your party’s HP and MP with healing items, because the second battle begins right after this one.

This fight is likely to last much longer than the previous, if only because of the White Witch’s big leap in terms of HP. Lick your wounds from the previous fight, but only after defending against the possible first move the witch may prepare; Death Drop. This is a nasty and greatly damaging attack that hits everyone in the area nearby. 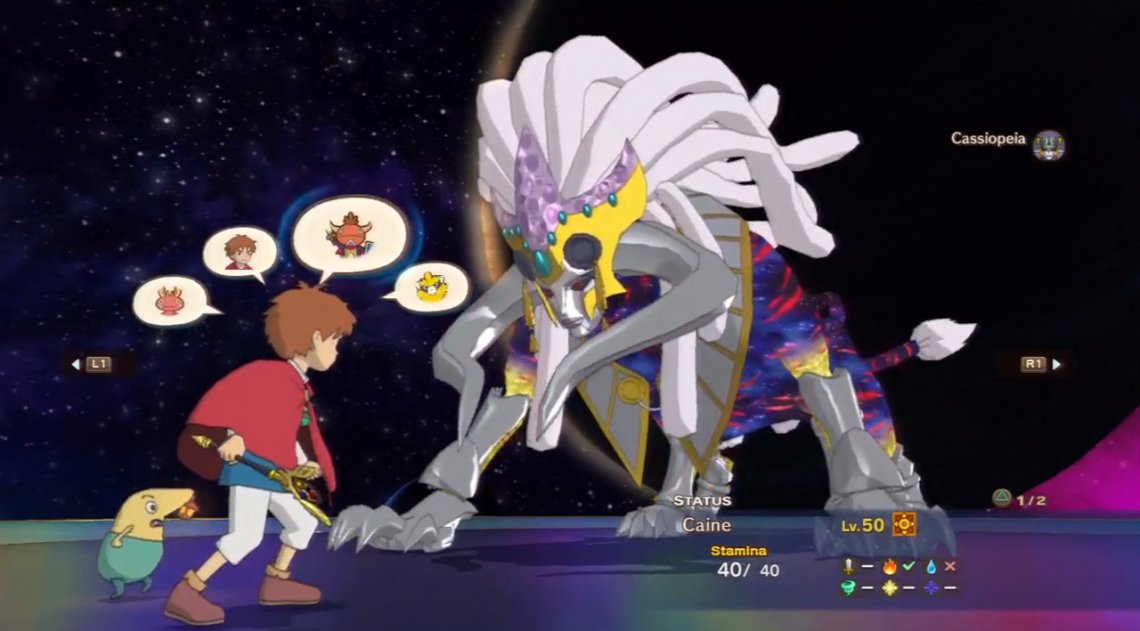 You’ll also want watch out for Annihilation. The White Witch will first radiate red and charge up, then leap back and perform the beam, which moves around the area. It’s possible to cancel or avoid it by standing besides her, but if that fails, definitely try to defend against it.

Winning the battle is easier if you take things easy. Don’t go in for that quick win and keep your distance, spamming medium spells like Arrow of Light with Oliver. The Witch will likely chase you around the field, allowing the others to get in some damage while you spam magic and heal whenever necessary with spells or provisions.

Fortunately, you are fully healed after these two battles, although the next does immediately follow.

The Zodiarch and its Satellites are certainly vigorous foes, but with the right tactics even a fairly low-level party can take them out. You’ll definitely want to use powerful MP (and HP) healing items during this battle, such as Nostrums and Sprite items.

At the start of the battle, immediately order an All-Out Defense and Defend with Oliver, as Zodiarch will use Chaos, a powerful attack that you don’t want to suffer defenseless. Cassiopeia will be fighting alongside you and try to prevent the Zodiarch from casting it again by using Nix; however, this takes a while to charge, so you’ll need to protect her from the nasty Satellites. 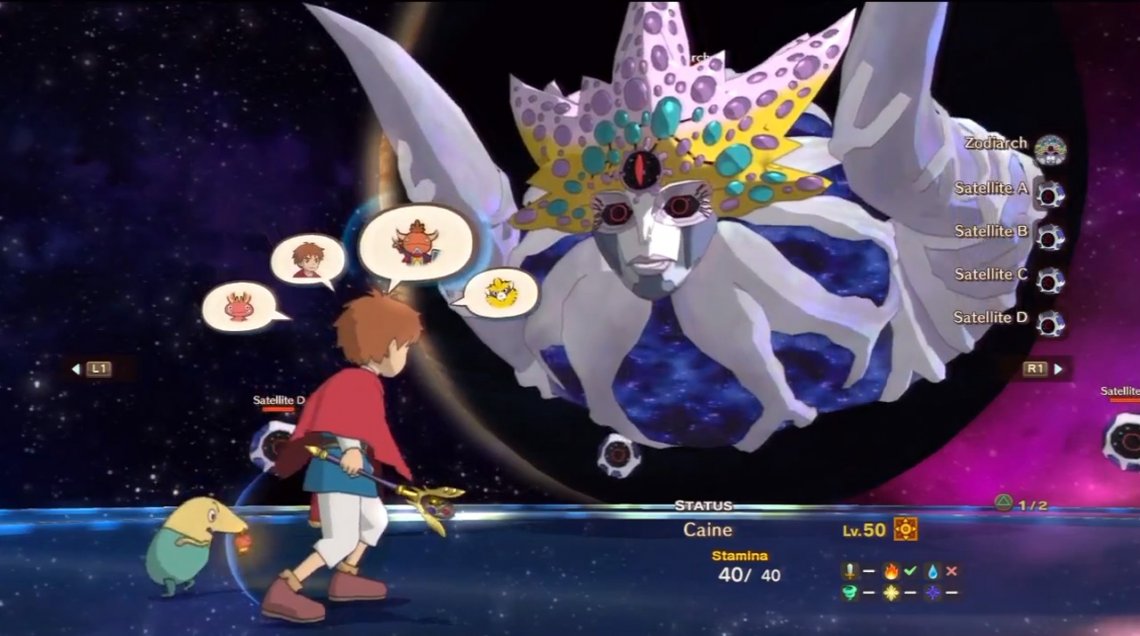 The best way to do this is to keep your distance with Oliver and perform a couple of castings of Astra (or Evenstar, if that’s all you have). This saps your MP enormously, so use a Nostrum when your magic juices run low.

You’ll still have to deal with the Zodiarch’s other attacks, of which Shockblast is by far its most powerful and annoying, not in the least place because he usually performs it as a follow up on Chaos, which is particularly lethal. Prepare to defend against both attacks, and if things go terribly wrong, use a Phoenix Tear or Breath if absolutely required. 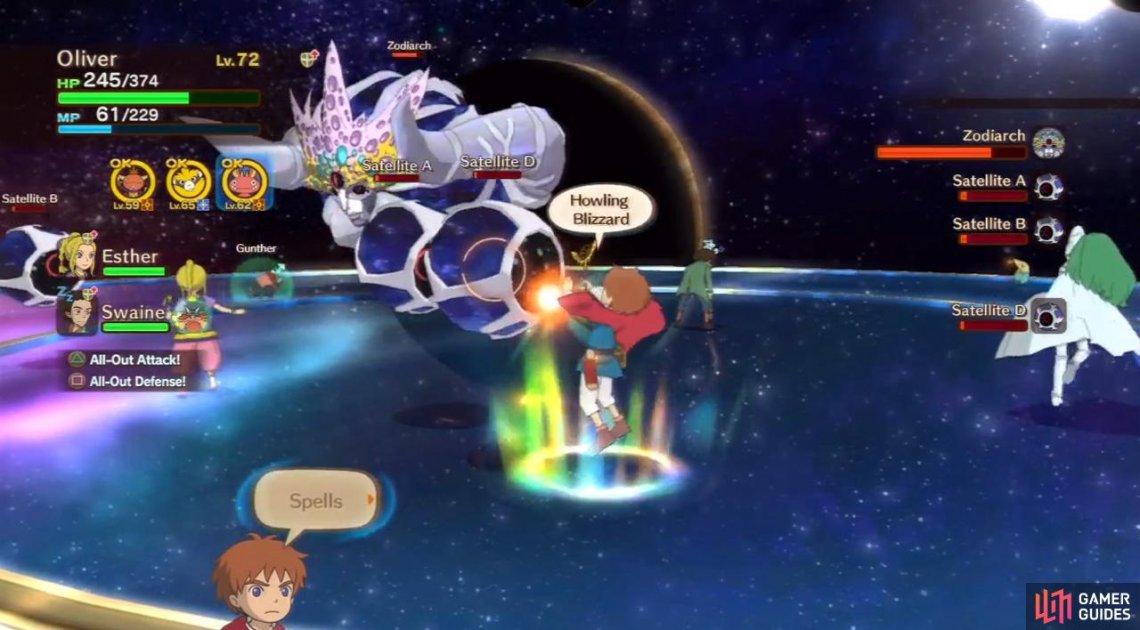 When Zodiarch is stunned by Nix, immediately perform an All-Out Attack in the hopes of getting some damage in, and possibly even a golden glim.

As with the last battle, play fairly defensively and destroy the Satellites as soon as possible, preferably with magic or tricks that hit all targets on the battlefield. Zodiarch will frequently use its Piercing Gaze attack (usually on the character you’re controlling), which lowers your stats. It’s more an annoyance than a real threat, but you can nonetheless boost the rest of your party’s defenses with a spell such as Ward, slightly improving their magical defence.

Keep your party healthy with group-healing items, keep Oliver at a distance, and keep your wit to win this battle eventually.

Awarded for learning all of Oliver's spells.

To unlock this trophy at the end of the credits you will need to have compelted all of Hoarace’s riddles. That includes the Astra spell obtained just before the final battle by backtracking to Ara Memoriae.

Awarded for freeing the other world from the clutches of the Zodiarchy.