Description: The Conductor is in a forest to the south of Ding Dong Dell, and has something important to tell you.

Goal: Agree to help him - if you want to know the truth…

To find Errand #131 , you must start Errand #085 - Notes from the Center. The man outside of the Cat’s Cradle in Ding Dong Dell lost his diary again, and agreeing to help him will open a new area. From Ding Dong Dell, go ahead and start walking directly southwest for an orange and yellow set of trees quite a ways east of the Golden Grove (which appears to be roughly halfway between the Golden Grove and the beach where the Sea Cow is docked.) If you go through the trees, you’ll find a path that wasn’t there until now, so follow the path a long while until you wind up at a hidden forest glade in the Southern Summerlands.

You’ll see a large door here to the north, as well as a strange looking bunny. He introduces himself as “The Conductor”; talk to him and agree to undertake his task to unlock a whole new set of errands. It starts with Bounty #116 (shown below), and ends with Bounty #130. Each of these bounties are re-fights of bosses that you’ve already beaten in the past, except that they’re a lot stronger than before. Most of them can be handled quite easily; if you need assistance, read further below.

Once you complete Bounty #’s 116-120 , you’ll need to cash in on the Bounty rewards, then return to the Forest Glade and talk to The Conductor once again, who will give you another set of Bounties to take on.

Once you complete Bounty #’s 121-128 , you’ll need to cash in on the Bounty rewards, then return to the Forest Glade and talk to The Conductor once again, who will give you yet another lone Bounty to complete.

Once you complete Bounty #‘s 129, you’ll need to cash in on the Bounty reward, then return to the Forest Glade and talk to The Conductor once again, who will give you your last Bounty.

Complete Bounty #130 , then return to The Conductor one last time, who will allow you to continue through the large door to take on The Guardian of Worlds, the game’s secret boss.

Awarded for defeating the Guardian of Worlds. 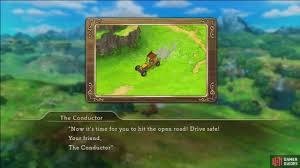 Watch the scenes that follow and continue talking to The Conductor along the way, and you’ll eventually receive the PHILMOBILE 2000 , and with it, the [PHILMOBILE KEY] . This will finally bring the last errand to a close. Feel free to drive the Philmobile wherever you can normally walk; just press the DOWN button to “summon” it.