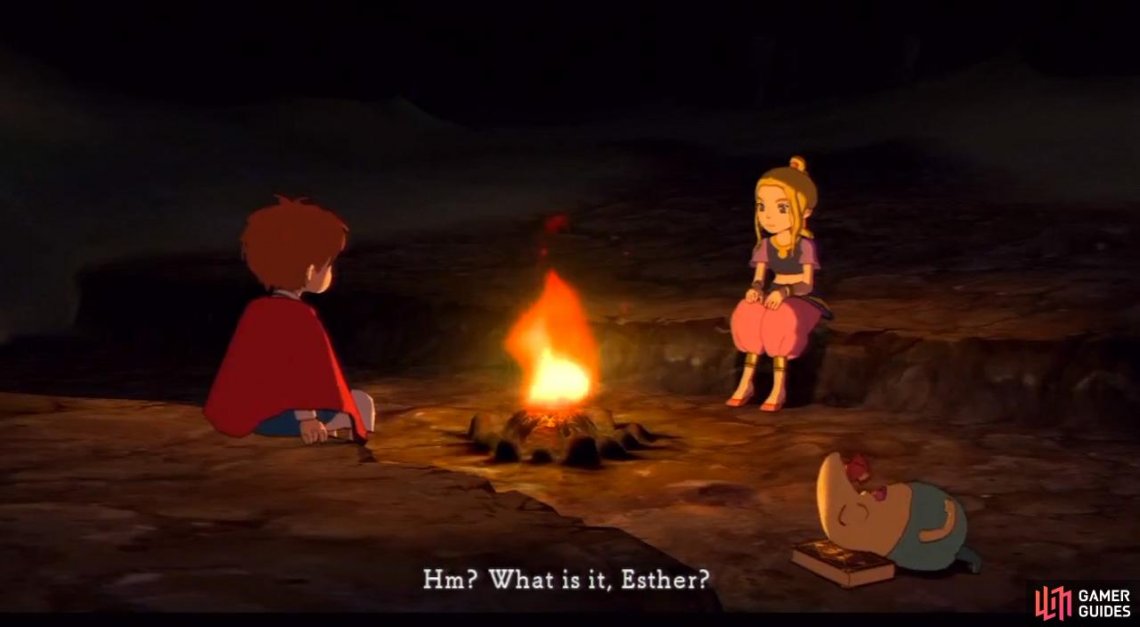 When travelling through the valley leading towards the temple, a scene triggers and you receive a new page of The Wizard’s Companion, [THE SIXTH TALE] of Wonder. Head up to the temple when you’re ready. 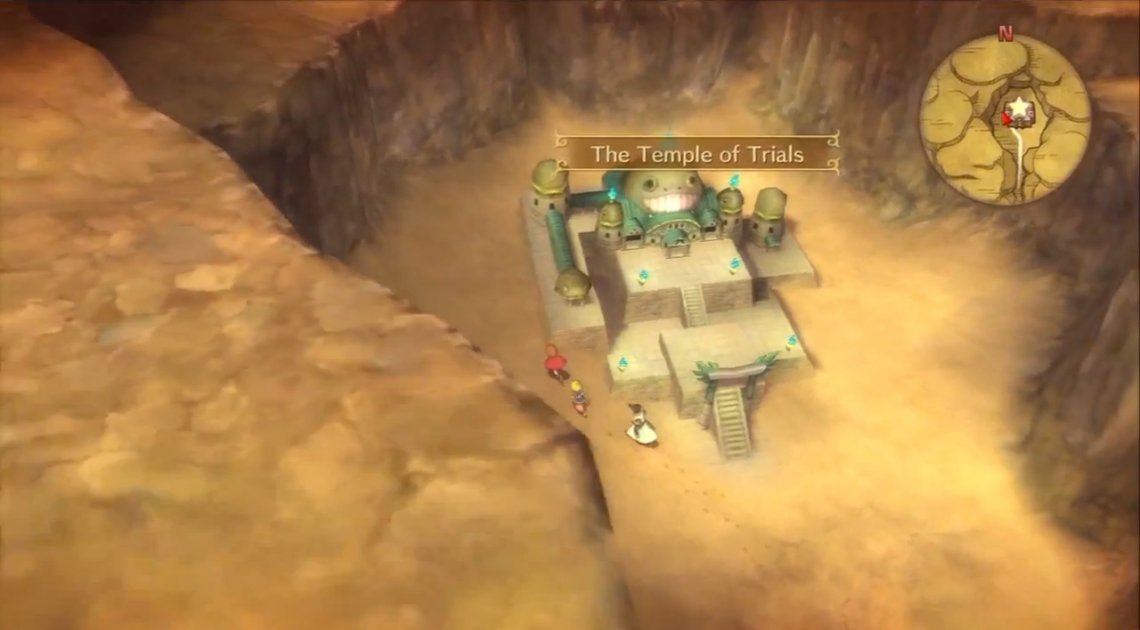 There aren’t any enemies for you to fight in this area, at least no regular random critters. Instead you’ll have to face three separate trials to test your worthiness as a wizard’s apprentice. Simply talk to Umbopa and Solomon to watch some scenes first. 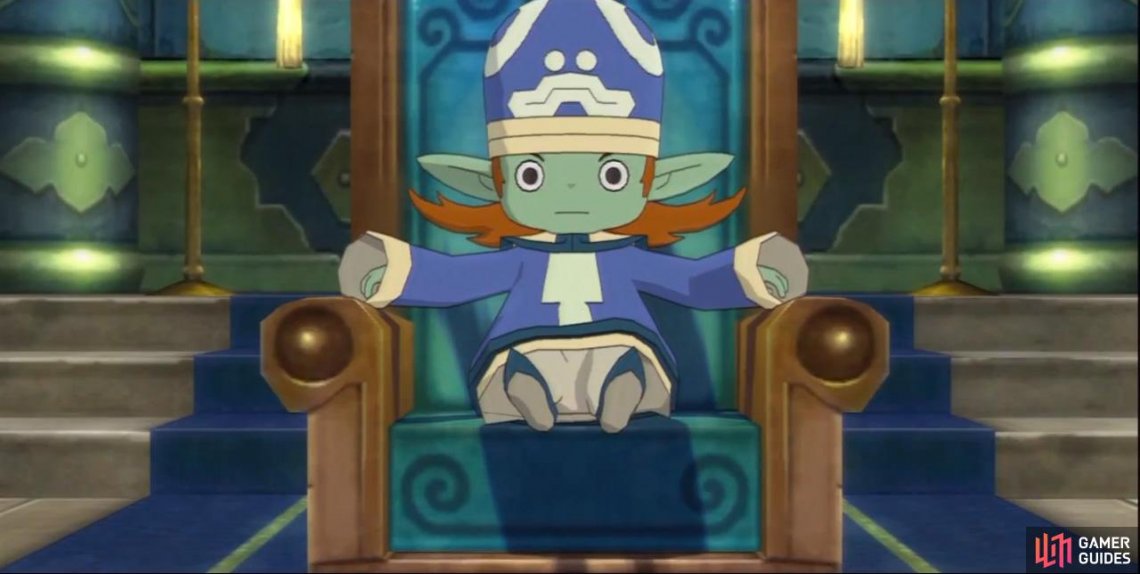 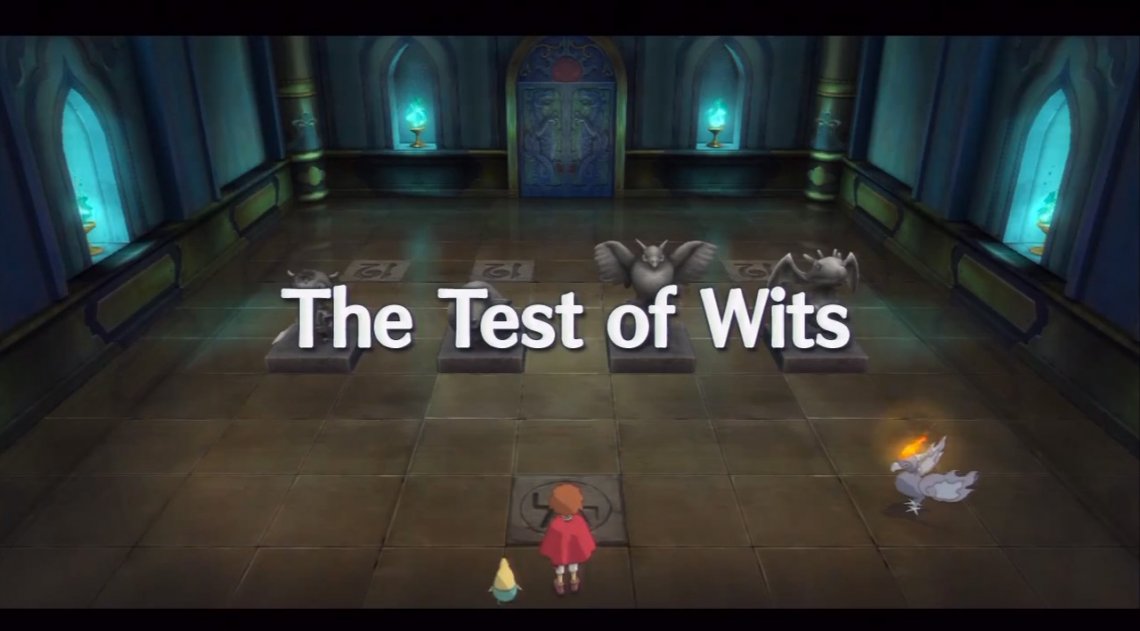 Head right to start this trial, in which you must solve three puzzles. You’ll have to stand on the symbol and cast the ‘Puppet String’ spell in order to move the statues around, although you might want to ask the bird for a hint first, which is, “The dragon sees the warrior’s sword, while the bird is shown his shield, the beast, meanwhile, looks to his right, and sees an empty field.” Should you not be able to figure out the solution, the order in which the statues must be placed is, from left to right: beast, dragon, warrior, bird. 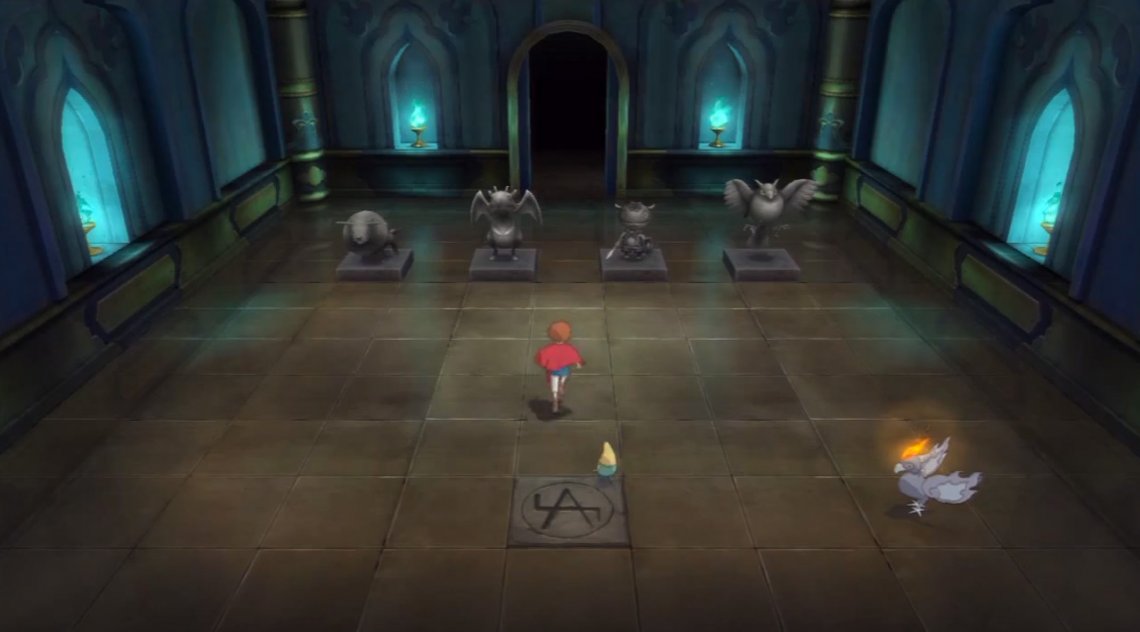 The second puzzle requires you to move the blocks, making them blend in the overall picture. From left to right, the first block needs to be placed in the center of the figure’s ‘mouth’, the next block’s proper location is the left-to- center part of the right eye, the third block should be moved to the right part of the mouth, the fourth block fits the left eye (its right side), and the last block fits the left part of the face’s mouth. If you’re still having trouble getting these where they go, or you lose track along the way, the screenshots below should help. 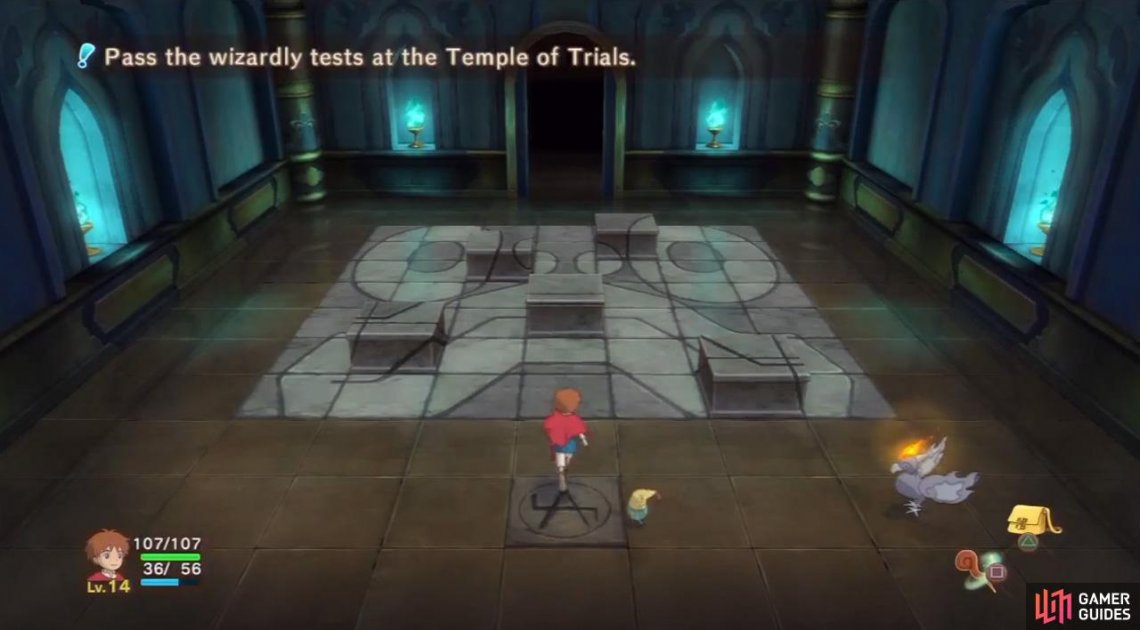 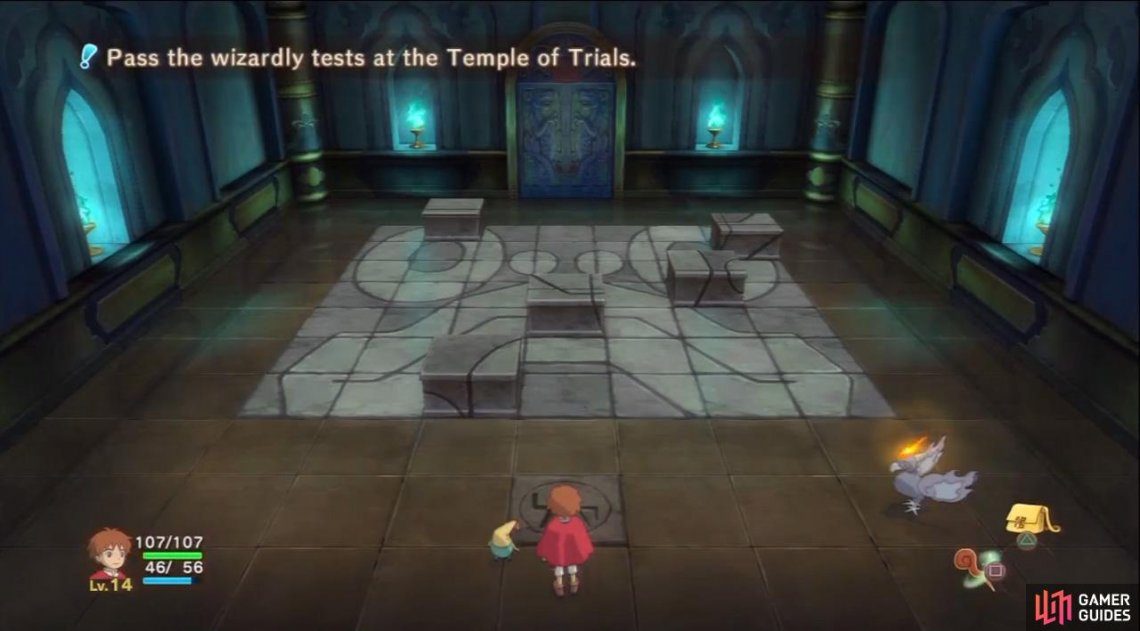 The third puzzle is a bit more complicated than the first. Your hint? “The bird is bound to dragon and moon, and on a star he sits. The beast links warrior, moon, and star, yet knows not where he fits.” If you need help, it can be solved as follows: Place the bird on the star mark on the lower right, the dragon on the sun mark in the upper-right corner, the beast on the sun mark in the upper- left corner, and the warrior on the moon mark directly to the right of the beast. 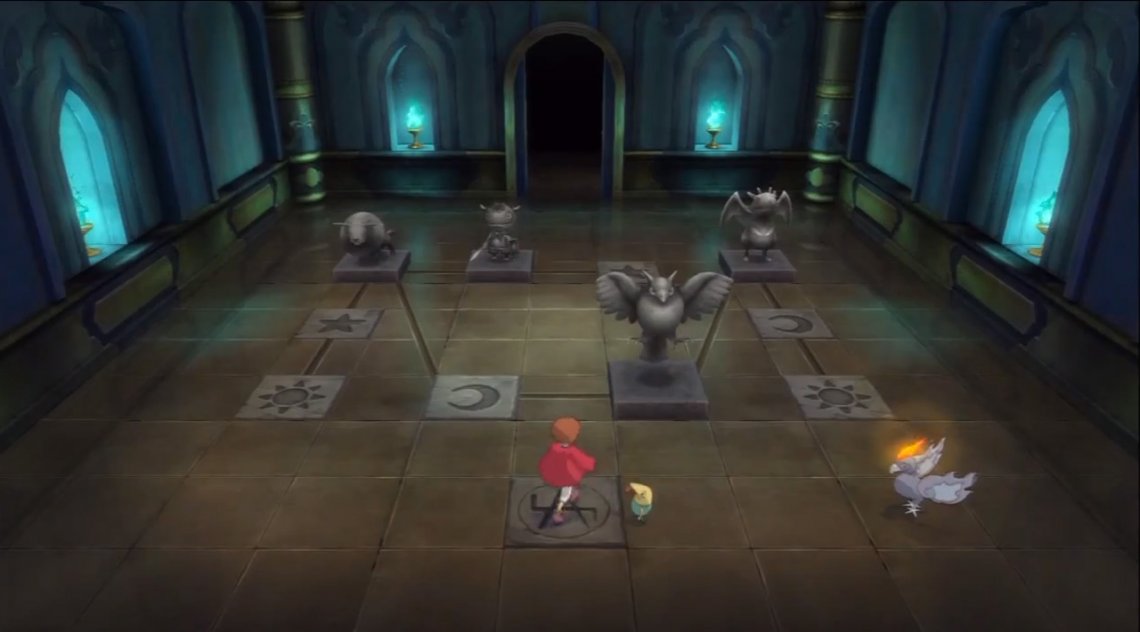 Completing this entire test nets you the [PROOF OF WITS] . 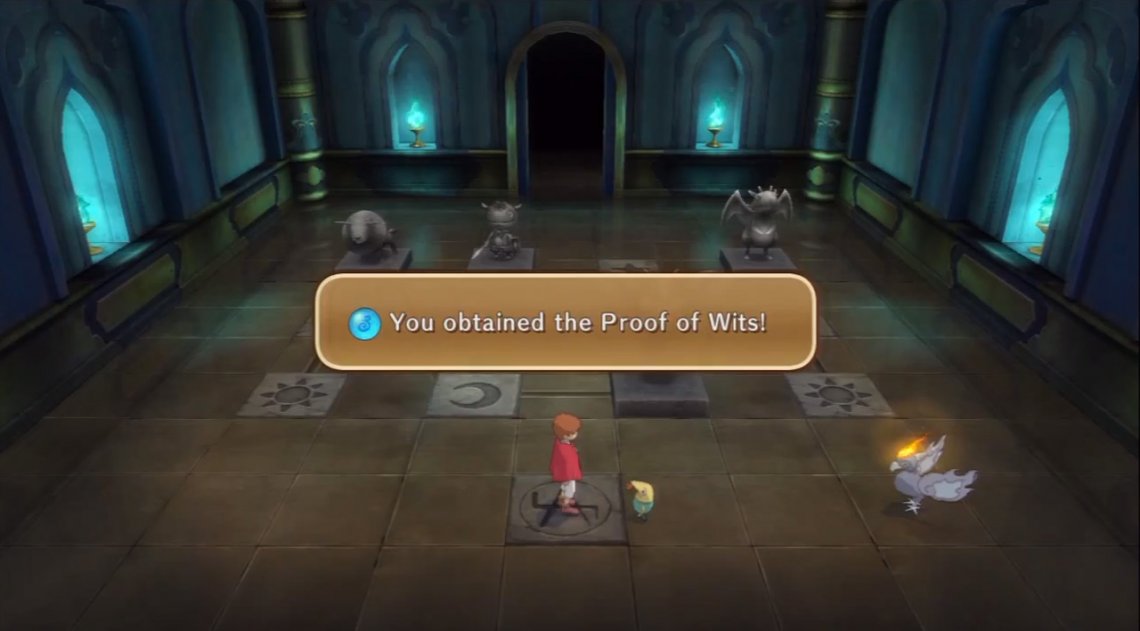 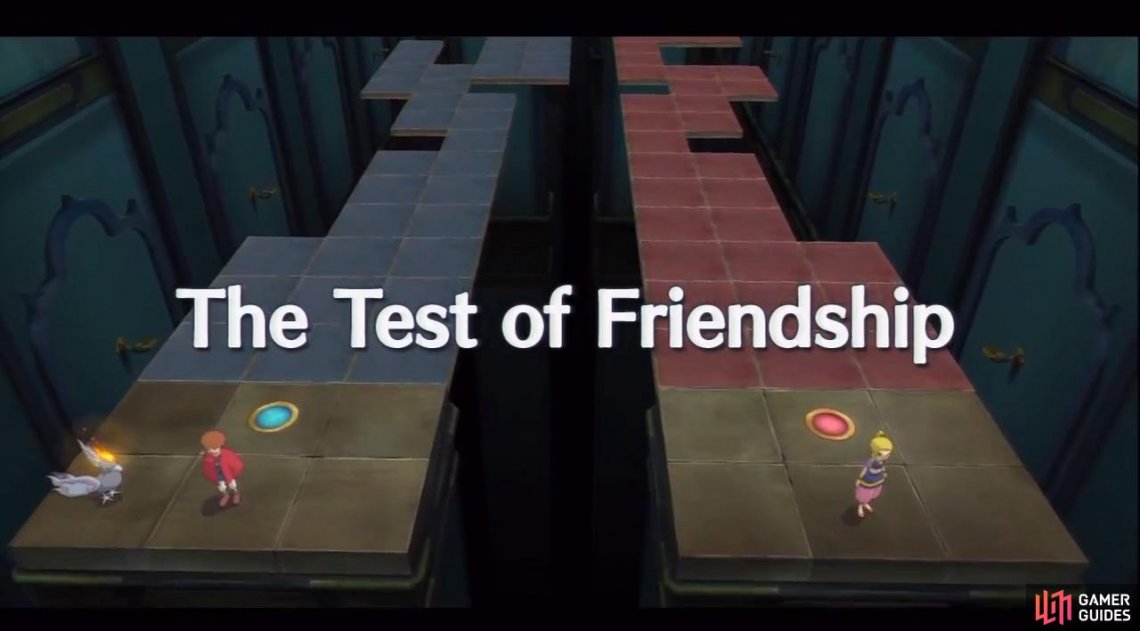 In these three trials, you have to control both Oliver and Esther simultaneously to get them across the paths, without them falling off. As soon as you start, the tiles will start falling down behind you, so a little speed is essential. The first path is straightforward, but the second path requires you to stand on switches to create bridges for the other person.

The third path makes the two paths cross from the left to the right and vice versa, so you might want to control just one character at a time and quickly switch to the next. There are no penalties for falling off, so you can try as often as you’d like. Finishing this test grants you the [PROOF OF FRIENDSHIP] . 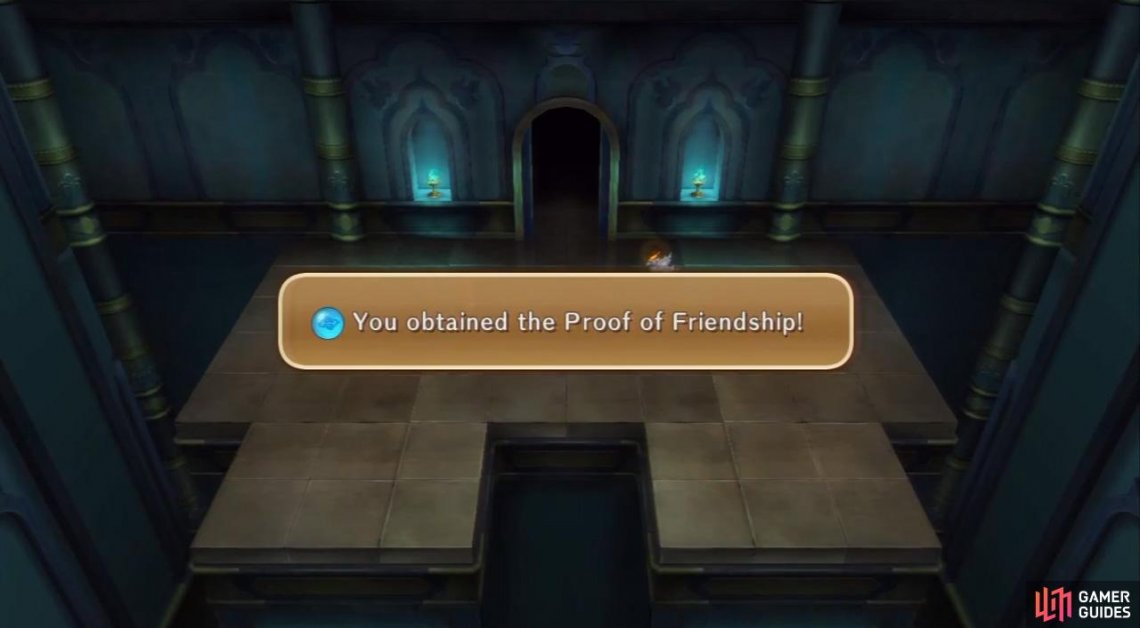 The third and final test is a boss battle, as you might’ve expected. Talk to Solomon when you’re ready to initiate it. 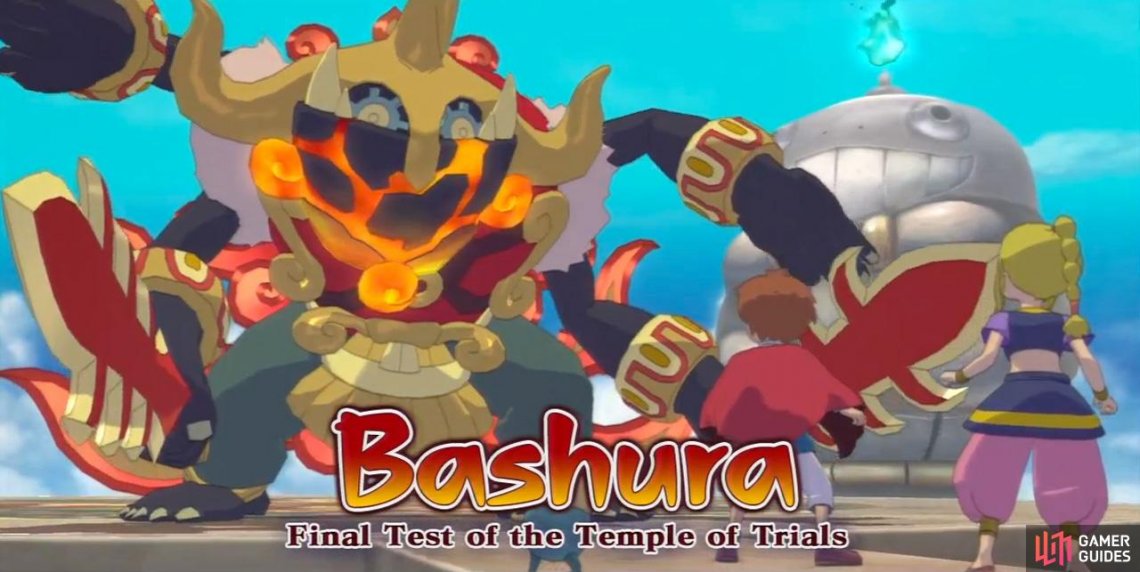 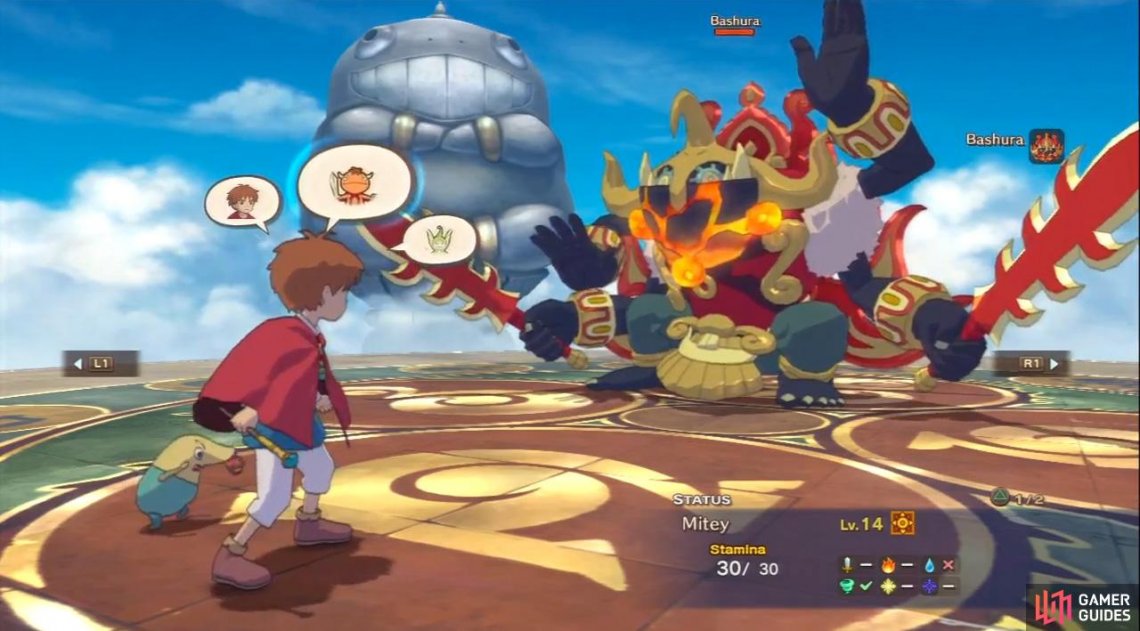 It’s important to know that Bashura is programmed in such a way to only focus on the character that you’re not controlling. This allows you to get a familiar to his side - not his back, which has magnificent defense thanks to the gigantic shield - and pummel him. Thumbelemur and Mite are both good options, and a flurry of attacks will often cancel Bashura’s attacks, allowing you to pull off an even longer assault.

None of his attacks are really worth even worrying about, as the most damage he will do in one hit is ~30. If one of your characters gets in trouble, switch over to them and move them out of the way. You could also heal them from a distance; both options work well. 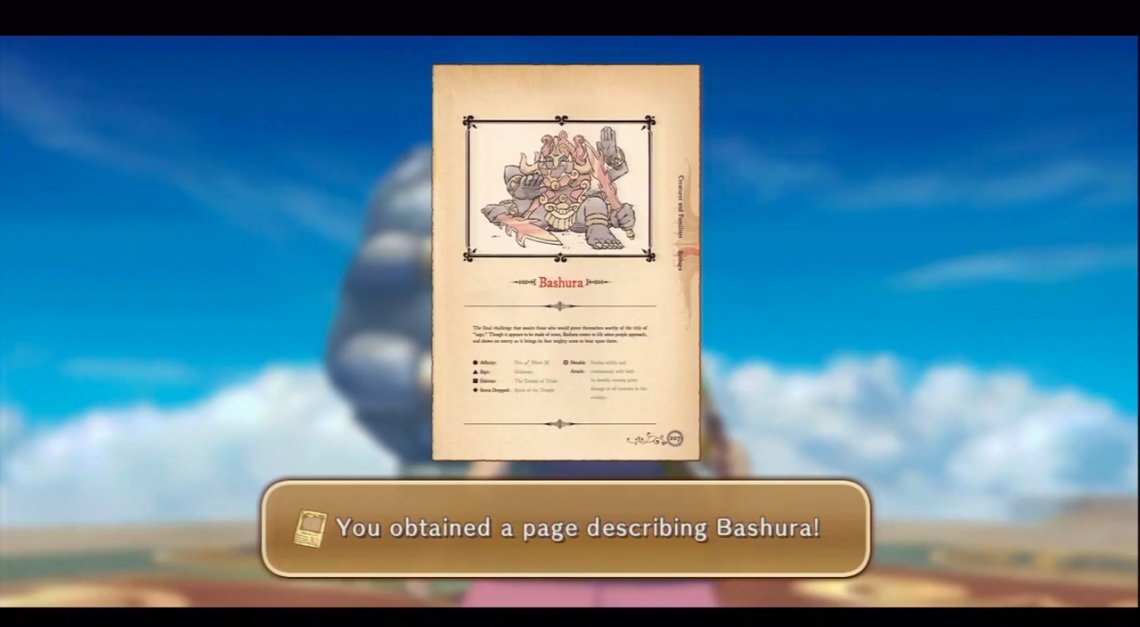 After the battle, you receive the page of [BASHURA] and the [PROOF OF STRENGTH] . Sage Solomon also rewards you with the [BRIDGE] and [BROOM BROOM] spells, as well as the important [HEART-WINNING HARP] . 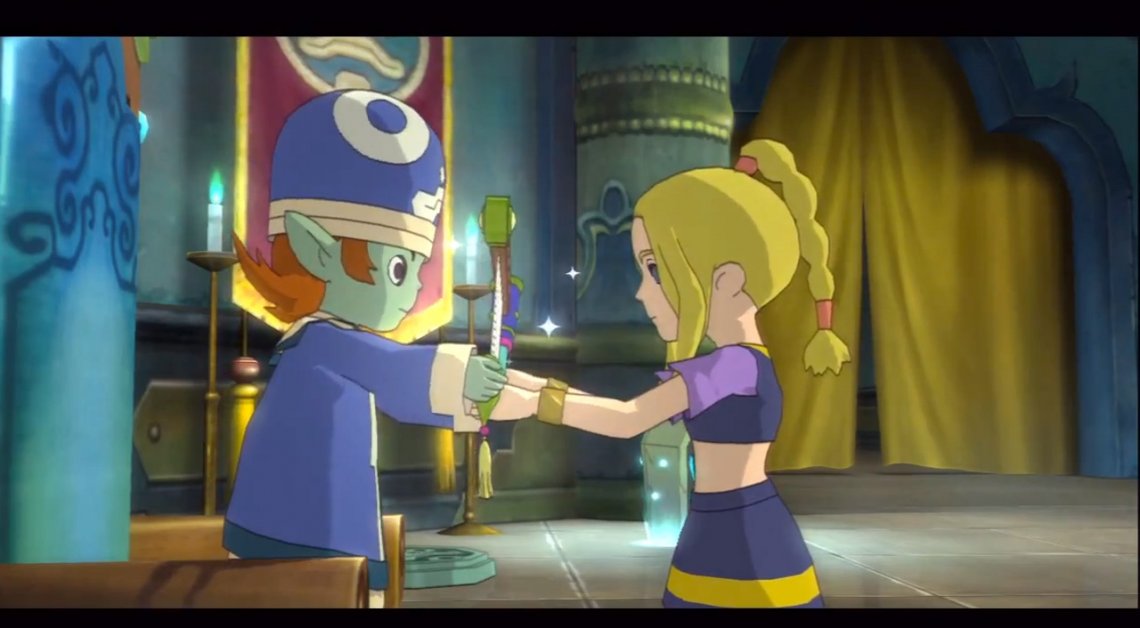 Now that you have this harp, Esther can play serenades to seduce creatures into becoming your familiar. You’re given a tutorial on this in which you’ll have to select one out of three potential familiars: Shonky-Honker, Boggly-Boo, or a Naiad. The Shonky-Honker is an all round familiar and fairly weak early in the game, but has the potential to grow out to be the strongest familiar in the game in terms of the magical attack stat.

Boggly-Boo is a strong attacker which will learn elemental attacks, and the Naiad is a familiar that is best used for healing. If you plan on mastering Ni no Kuni, the Shonky-Honker might be a wise decision. You can, however, catch these familiars later too.

Start the battle and fight the familiar of your choice, then play the serenade as it falls in love with you. In regular battles there’s only a small chance that a creature does this, so you’ll have to keep an eye out for when it does.

You’ll also be shown how familiar metamorphosis works; this means your Mite is undergoing a required metamorphosis. You’ll be given a [SUNDROP] treat; give it to Mite and he’ll change into Mighty Mite. Unfortunately, this resets his level back to 1, meaning he won’t be as strong (in the beginning) as your Mite. On the plus side, a level 1 familiar is levelled up very quickly and the first ten levels should be a breeze to get.

Then there’s the Familiar Retreat, which allows you to store any unneeded familiars away (up to a total of 400). The first time you use it you’ll receive vials of [GREAT SAGE’S SECRET x3] , basically an Elixir-like item that fully restores the HP and MP of one character. You also receive [JUMBO SUNDROPS x3] , [JUMBO STARDROPS x3] , [JUMBO MOONDROPS x3] and [JUMBO PLANETDROPS x3] . These are all used to metamorphose your familiars (into their third forms). For now you’ll want to hold on to your familiars, but the retreat will prove very valuable later in the game.

You never have to worry about having too many familiars with you. If you catch a familiar when all your slots are full, it’s automatically sent to the Familiar Retreat.

The Great Sage’s Secret item is quite useful in (boss) battles, but before using any such Elixir, it’s important to know that they can be sold for the massive amount of 6000 G. Especially early in the game, it’s highly profitable to sell at least one of these (and possibly more) to solve all your financial problems for a long time to come.

Great Sage’s Secret is not unique and can be gotten later in the game, although they do remain fairly rare. And in case you were wondering, no, they’re not used in any Alchemy formula (Alchemy is something you’ll get soon enough), so the only reason you could have for keeping them around would be to use them in a battle to restore one ally’s HP and MP for the price of 6000 G (in our opinion, hardly worth the price).