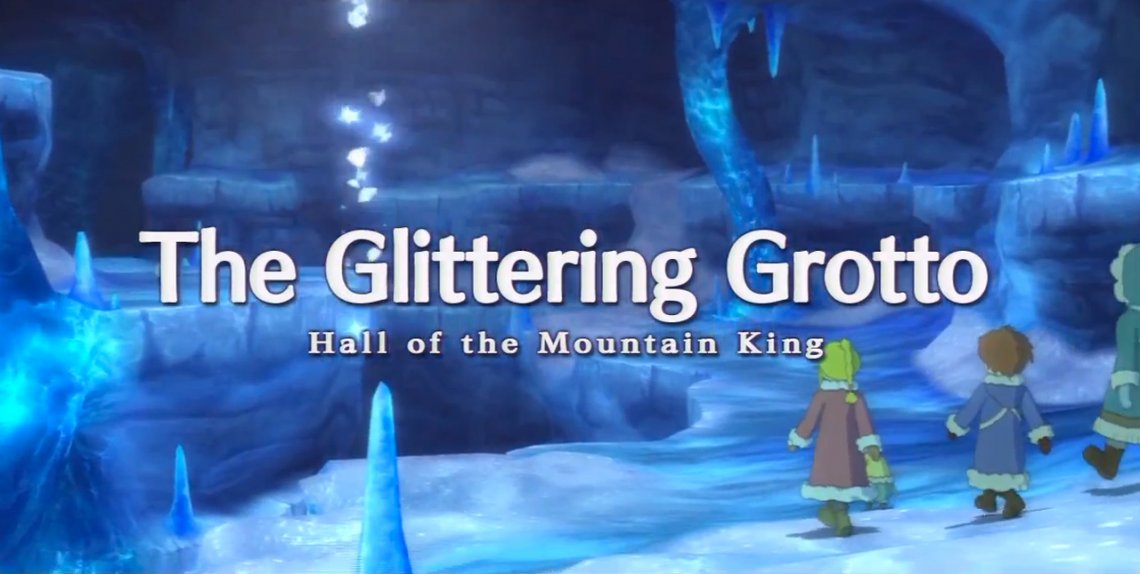 The first part of the Glittering Grotto is fairly straightforward, but there are some sideways that contain treasures. These are all located on the west side of the area, the first being in a chest to the southern dead end that contains a [FROSTY FLAN] . 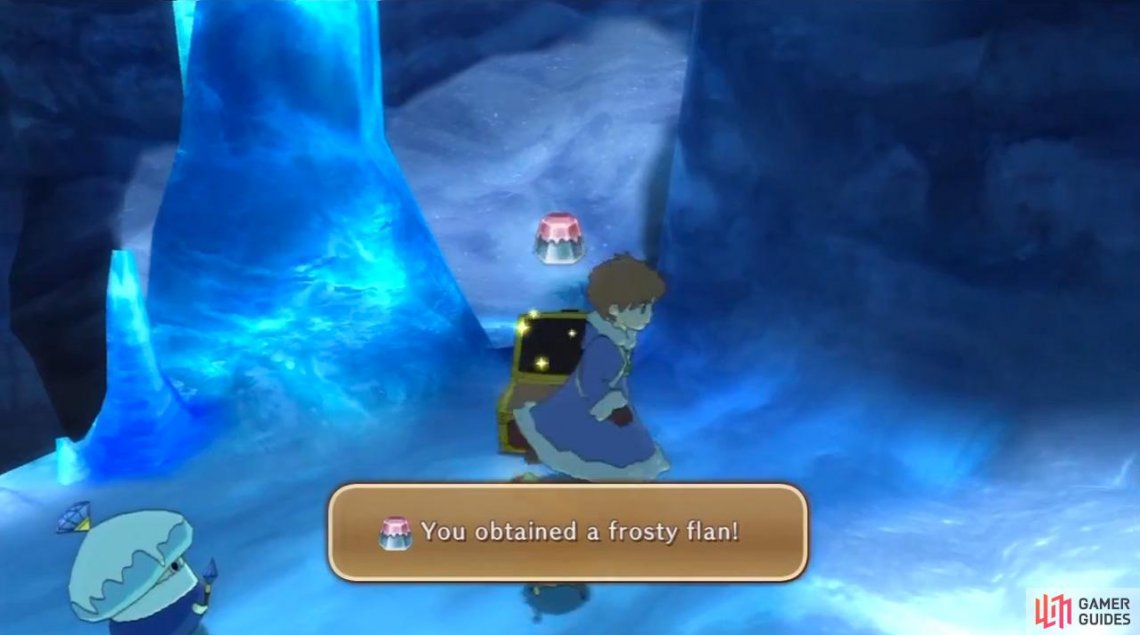 Following this trail to its northwest leads to a second chest with a [SNOW-WHITE ICE CREAM] . 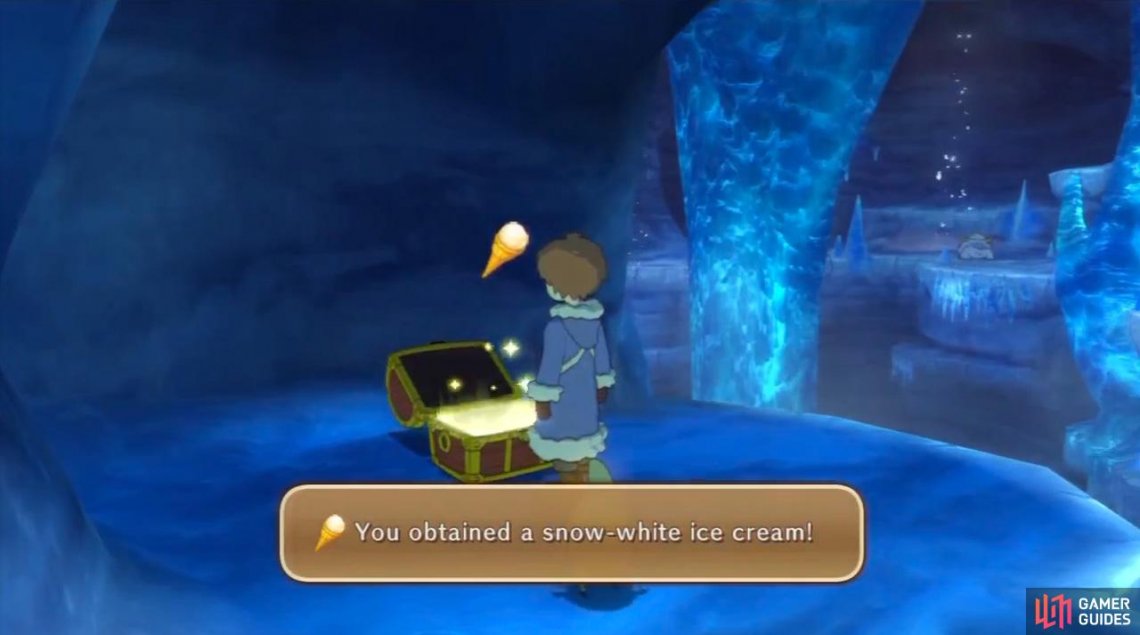 Return to the main path and follow it to the north until you reach a chest with a [PHOENIX BREATH] inside. Hop on the ice pillar to the east, using it as stepping stone to continue north. Doing so causes it to break. 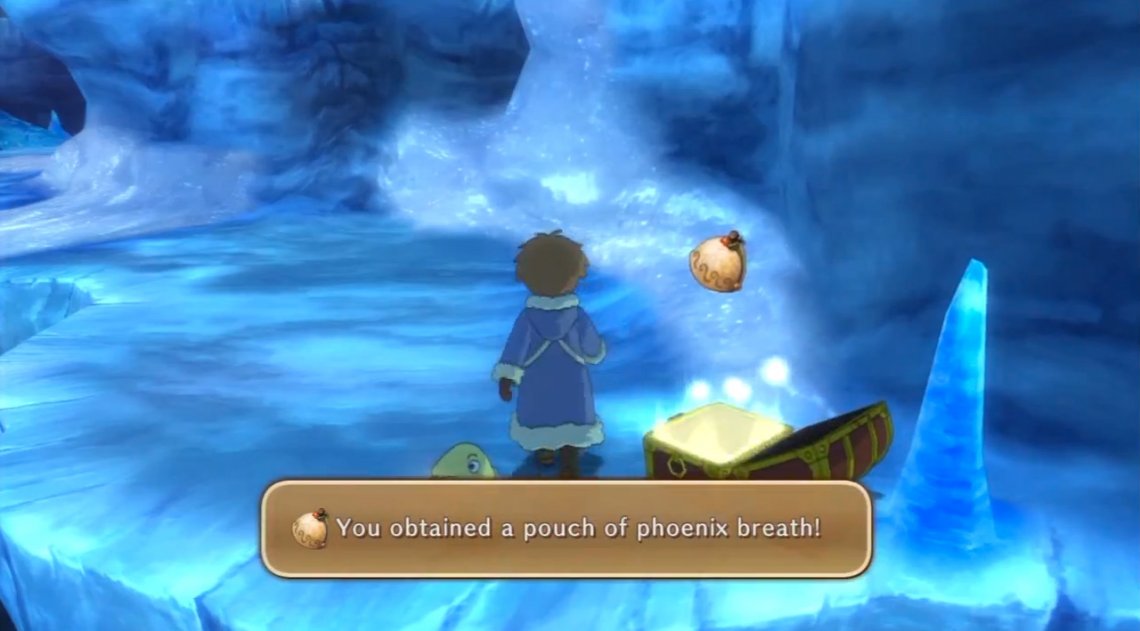 You can still backtrack by heading right/south at the intersection up ahead, moving through the hidden tunnel next to the tomte. In any case, continue north until you reach a chasm; cast your Pulse spell to break the stalactites loose and use them as stepping stones. The large stalagmites blocking the western path can be molten with a dose of Fireball. 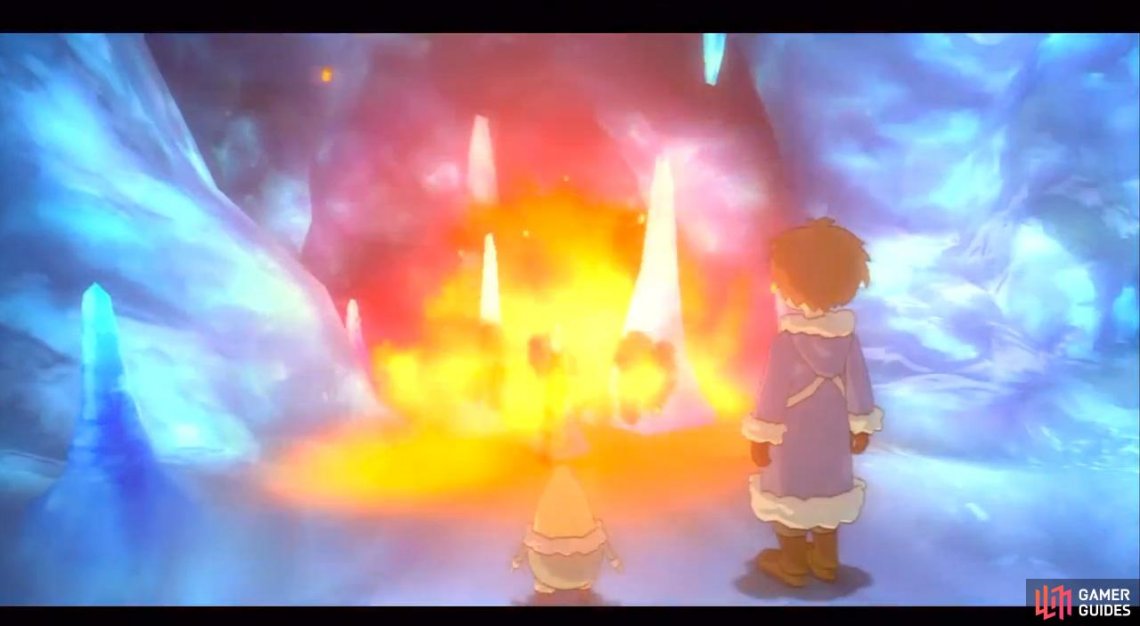 At the intersection up ahead, turn right/east and melt away the fallen stalactites to reach a chest with [SAGE’S SECRET] in it (the stalactites will grow back to the ceiling). Return to the intersection and follow the path, melting two sets of icicles (the second revealing a chest with [CHOCOLATE BONBONS] . Following the trail leads to the lower area of the Glimmering Grotto, but be sure to cast Pulse as you curve around the corner - there’s a stalactite on the right side of the trail as you go down - creating another stepping stone down below. 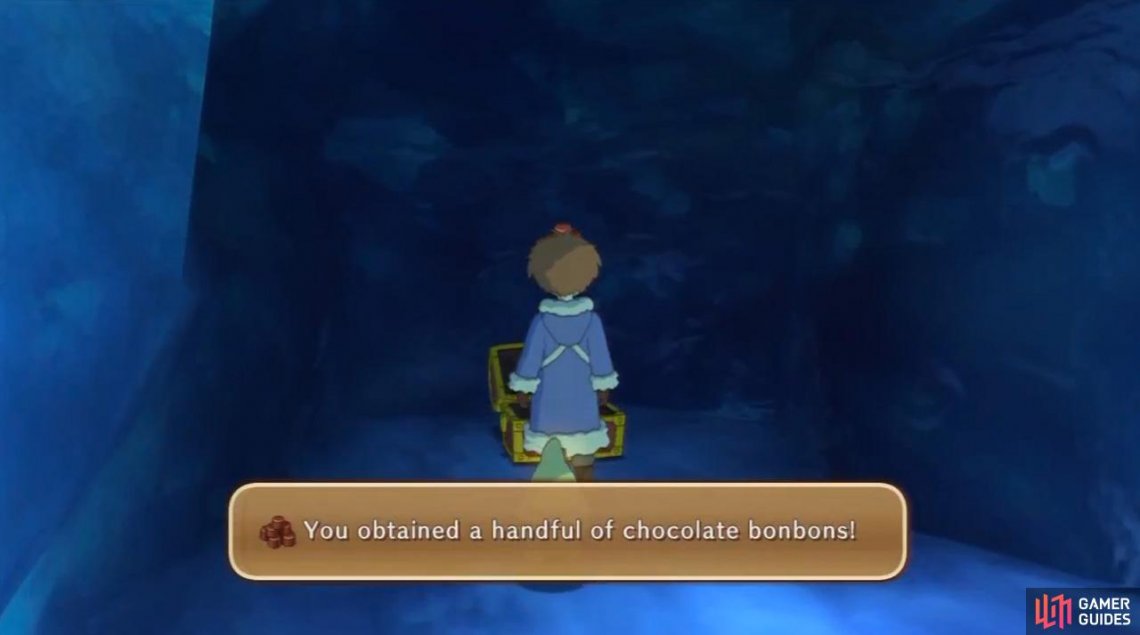 In this lower area are several paths to take. First, move left of the platform with the regular chest to find a green chest containing a [HOLY SHIELD] . Now head back and take the eastern path going up the hill, moving over the stalactite you knocked down just now. To reach the chest, simply cast Pulse again; its contents are a [BLUSTER BLADE] . Return to the lower floor, melt the first set of stalactites at the narrow path to the east, then run straight through the wall. The chest in this hidden section contains a [MEDAL OF AGILITY] . 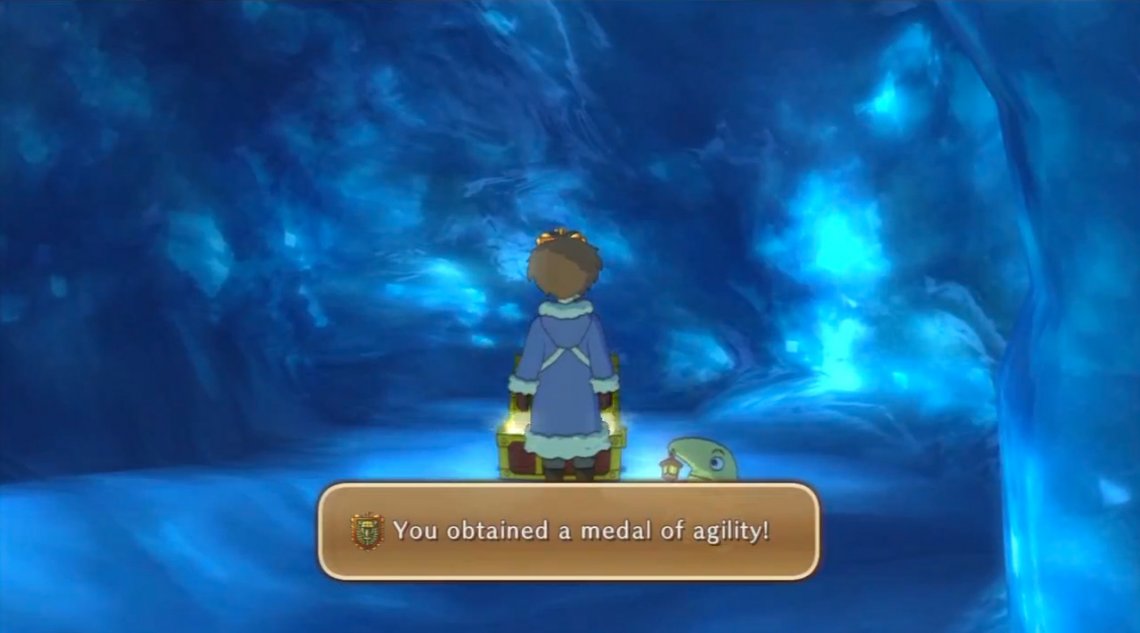 Melt the other set of stalactites that’s blocking the northern path to proceed north where you’ll reach an intersection. Follow the left/west path to its northwest end to shoot a [PHOENIX TEAR] out of the green chest laying on a platform to the far west. Don’t go over the stepping stones; instead, backtrack to the intersection and follow the eastern path. 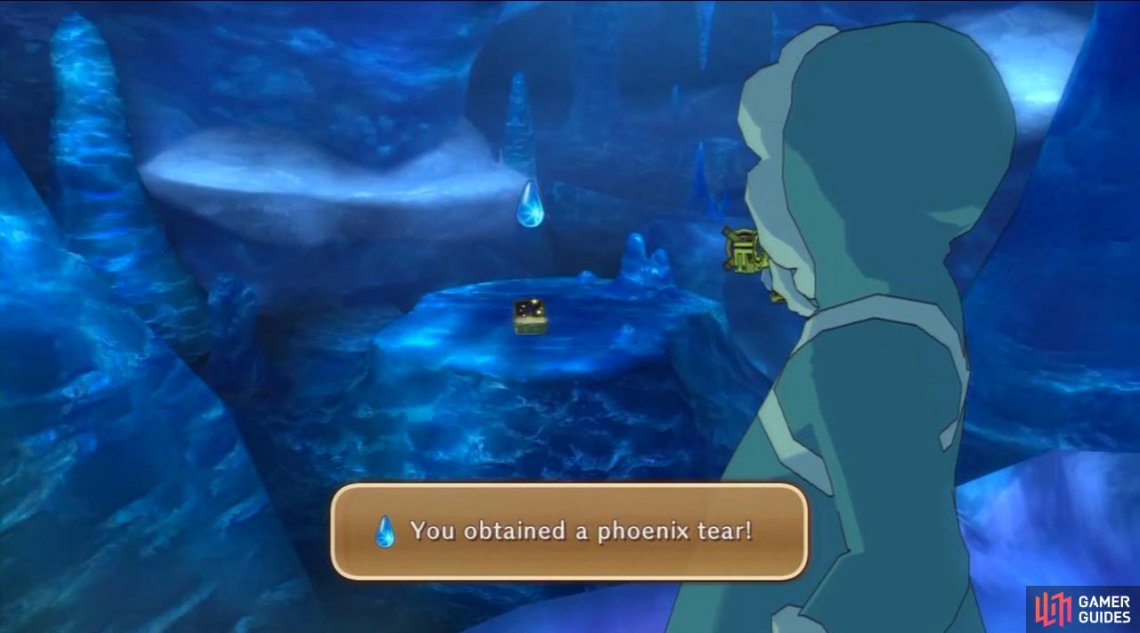 After crossing the ice bridge, keep hugging the wall to your right/east until you find a hidden passage giving access to a chest with a [SNOWBALL GEM] inside. Save your game at the waystone up ahead and prepare yourself for an upcoming boss battle; definitely equip the Blazing Blade, as well as the water-resisting equipment you bought earlier on. 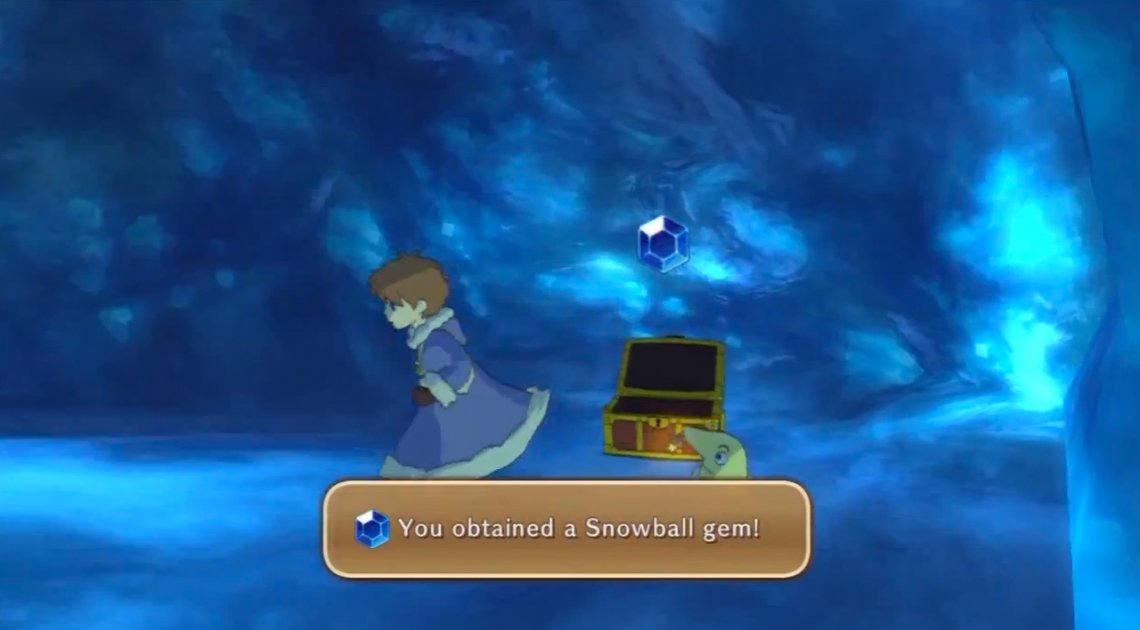 Cerboreas is a swift attacker and his physical attacks will sometimes smash you and your familias around the area, cancelling their attacks. Since the creature is weak against fire, casting Fireball repeatedly with Oliver in the early stage of the fight can be beneficial; grab the golden glims with Oliver and perform him fire-based Burning Heart. Since you can’t keep abusing the boss’s weakness like that (the chance for a stun diminishes over time), focus on timed All-Out Attacks and Defence.

Its most dangerous attack is by far Howling Blizzard. It causes major damage to your entire party, and it’s casting time is very short, making it difficult to defend against. Water-resistant equipment surely comes in handy here, but be sure to heal up with a Pixie Dew afterward nonetheless. 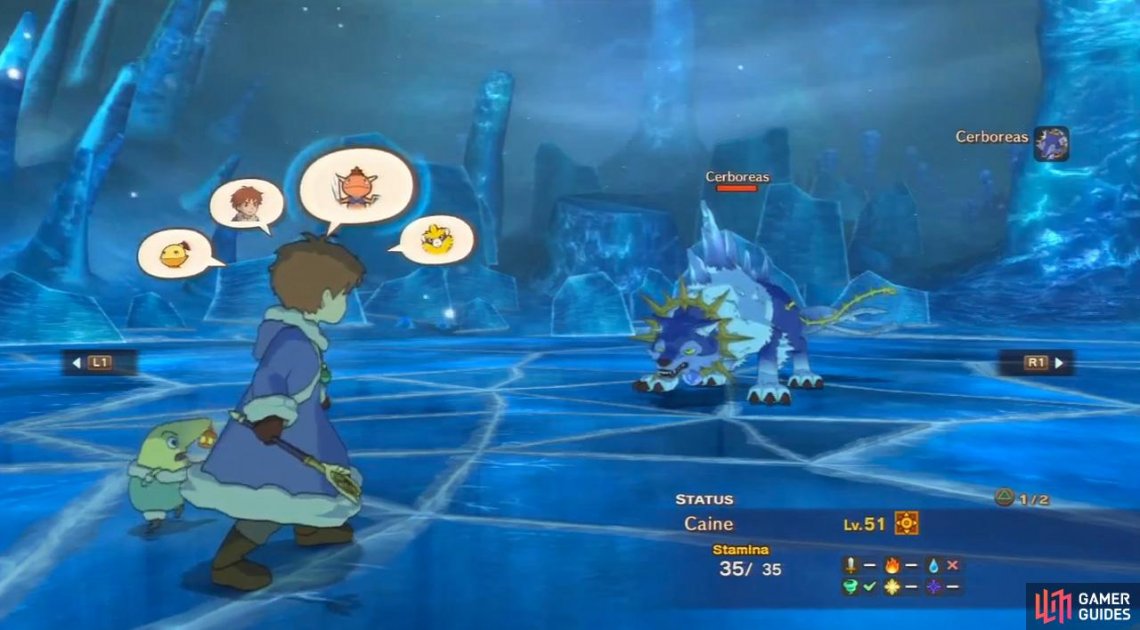 After defeating Cerboreas you’re finally granted the third and final magical stone, the [STAR STONE] . You’ll also unlock the [CERBOREAS] page for your Wizard’s Companion. Watch the long set of scenes that follow.

Now that you have all three stones for Mornstar, it’s time to head to Hamelin to try and figure out how to get them reunited with the wand. Feel free to take care of the two Errands left in Yule. 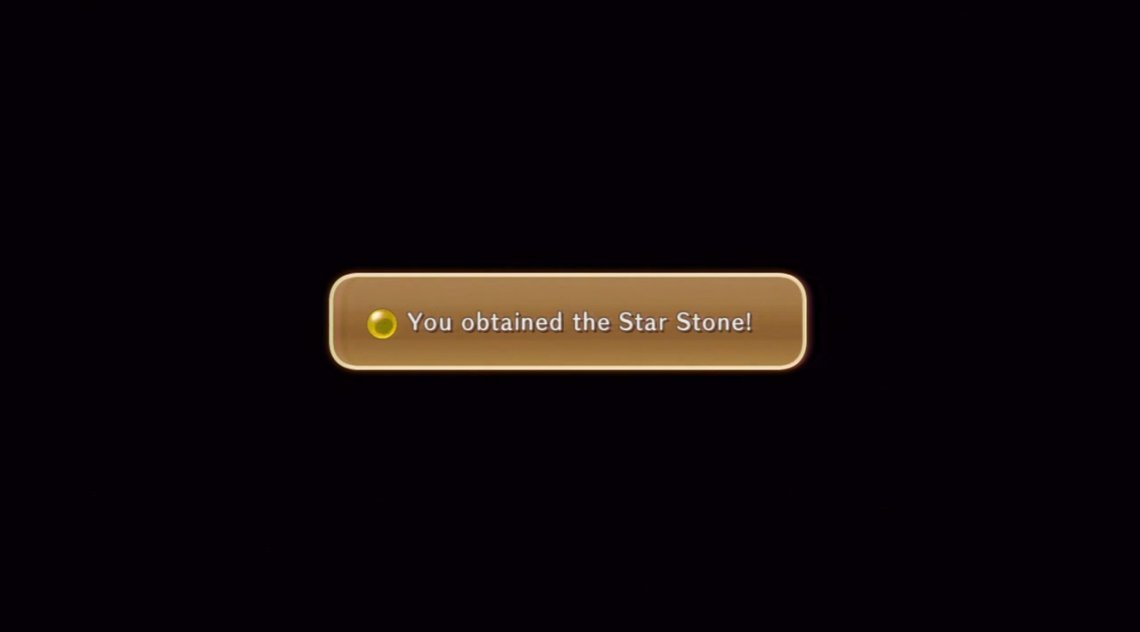 With the quest for the three stones taken care of, make sure to make a quick stop at The Deep Dark Wood. Stop by and drop Old Father Oak a line once again, and since you now have all three stones, he’ll give you a bottle of [NOSTRUM] .

A tomte mother in Yule is worried about her son, whose whereabouts are unknown.

Goal: Agree to help the tomte find her son.

Talk to the purple Tomte standing in the center of the northern part of town to learn that she’s unsure of where her son is, so it’s Ollie and Drippy to the rescue.

Talk to the little kid near the northern exit of town, and he’ll tell you that the poor kid is in the Glittering Grotto, so travel there at once. Make sure you’re healed at the Waystone, then proceed far northwest to find the kid being ambushed by a Water Ogrrr and three Turban Legends.

Quickly dispose of the Turban Legends first, using any fire-based tricks up your sleeve. Once they’re down, then focus on the Water Ogrrr. They’re not too tough, but if you don’t get rid of the Turban Legends quickly, then you may have to spend extra time healing just to keep up. Once the battle is over and you’ve talked to the kid, you’ll automatically return to Yule and be able to reap the rewards.

A man visiting Yule is rather flustered after misplacing his diary for the umpteenth time.

Ugh, this guy… You know him. Time to find his blasted diary once again. He is by the elder’s house on the northern part of town, so talk to him to get started. This time, the diary is in the forest glade that we’ve already visited; have Tengri drop you off on the other side of the river to the west of Yule, then go northwest into the large forest to find the glade again. Talk to the woman here to find the [TRAVELER’S DIARY] , then return it once again.

If you’ve completed all of the errands available up until now, you will unlock the ‘Humanitarian of the Year’ trophy.

Humanitarian of the Year

After this last batch of Errands have been completed, you should be able to afford your first third tier Merit Award! I recommend grabbing the “Jack of Hearts” reward, that way you’ll have an easier time recruiting familiars.