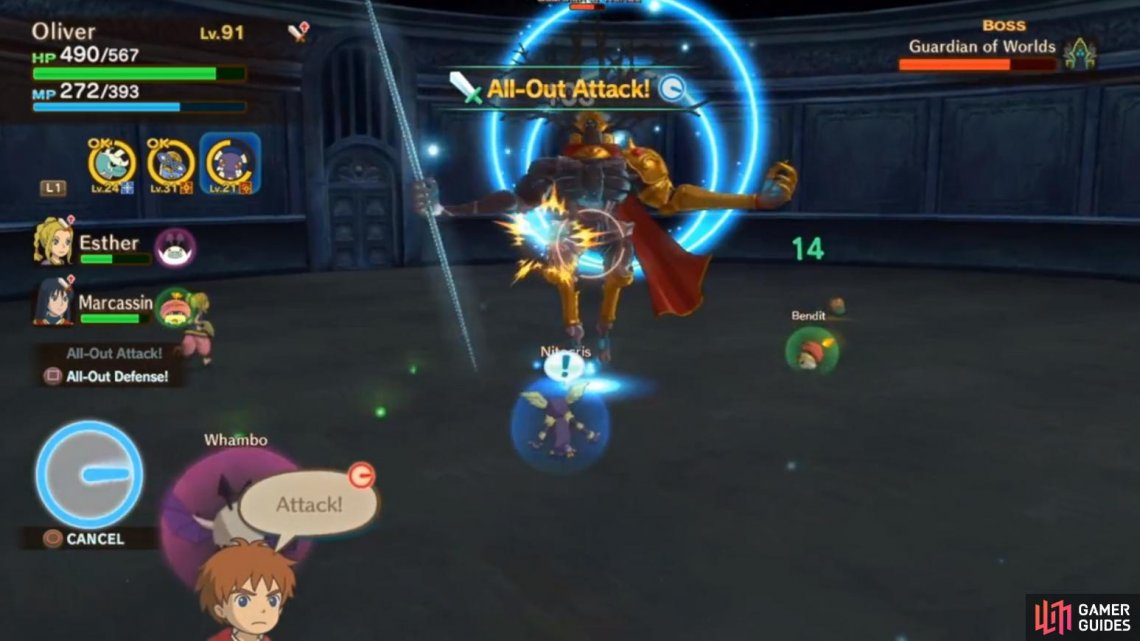 Once you’ve successfully completed all of the Bounty Hunts related to Errand #131 (#‘s 116-130), you’ll be ready to give the good news to The Conductor in the Forest Glade south of Ding Dong Dell. Talk to him to learn a little more about the alternate worlds, as well as the Guardian of Worlds.

If you’re here early then to begin the Guardian of Worlds errand, check a few chapters back for [ERRAND #131 - The Conductor] and start from there, following along and completing all of the boss fights in #116 - #130 to bring you to this point.

When you’re 100% prepared, examine the large door to the north, then proceed to the end of the hallway to the north and open this last door to face the ultimate secret boss of Ni no Kuni!

Surprisingly enough, the battle isn’t downright close to impossible like some would think, but it can be pretty tough at times. The Guardian has two major attacks; Overload and The Great Divider. When you see Overload coming, just back away and fire away a spell/trick or two, since it won’t come even close to hitting you.

The Great Divider, however, is the strongest attack in the entire game, and can COMPLETELY empty your whole HP bar in one hit. When you see this attack coming, QUICKLY decide whom he is targeting, switch to that character, and quickly Defend to help minimize the damage. If it appears that more than one character is in the line of fire, then just switch to an All-Out Defense and hope for the best. Make sure to take the time after the attack to toss up a Sprite Dew or two to bring your party back up to snuff.

Whenever you’re not avoiding The Great Divider like it’s the black plague, buff up your strongest familiars and launch your strongest tricks at the Guardian. Someone like a leveled-up Catastroceros, buffed with War Cry, that can cast Bowlder can easily do 1400+ damage in one strike, followed by either Earsplitter or Sling Stone can drop another 500+ damage on top of that. It doesn’t have to be the Catastroceros; any familiar with a high Strength stat should be able to do a decent amount of damage while buffed again the Guardian.

If you’re unable to keep up with the damage being done to you, then switch to Esther and let the other two take care of the damage while you focus on buffing and healing. Considering this is the hardest fight in the game, as well as likely your last, feel free to use up all of those items you’ve been hoarding throughout the game.

You’ll receive the “King of the World” trophy after this victory.

Awarded for defeating the Guardian of Worlds.

Watch the scenes that follow and continue talking to The Conductor along the way, and you’ll eventually receive the PHILMOBILE 2000, and with it, the [PHILMOBILE KEY] . This will finally bring the last errand to a close. Feel free to drive the Philmobile wherever you can normally walk; just press the DOWN button to “summon” it.

You can fight the Guardian of the Worlds as many times as you want. Just return to the hidden Forest Glade and go through the door again. However, make note that it will be tougher than what it originally was; it has quite a bit more HP (21500 instead of 13500), and is stronger all around, doing quite a bit more damage to you and making the battle that much harder. (REWARD: 21000 EXP, 14000G, Kaleidostone)