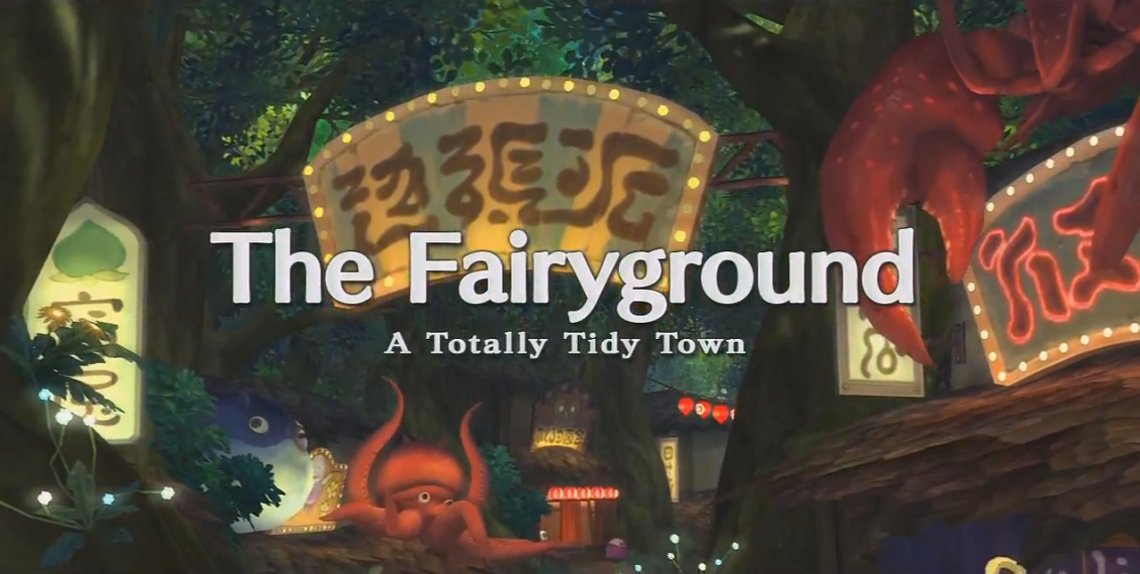 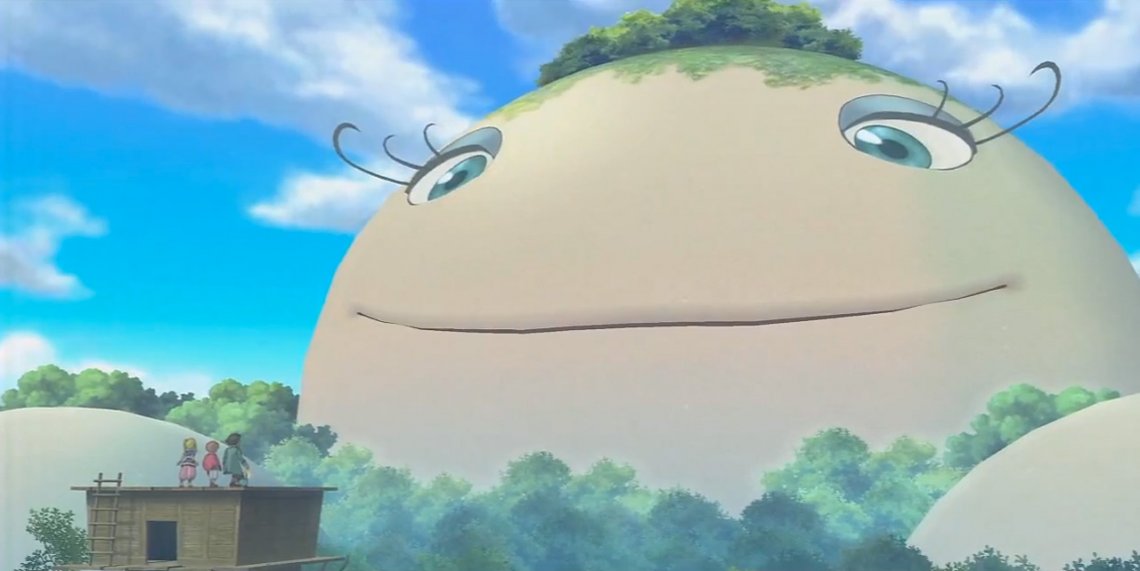 Fairies! Fairies everywhere! A group of them will grab Drippy and run off with him, so let’s plod along so we can get him back. Head all the way north for a scene with… well, let’s just say a rather large Fairy Godmother. After some hilarious dialogue, she’ll give you a [SUNDROP] , [STARDROP] , [MOONDROP] , and a [PLANETDROP] to aid you with raising your familiars. However, you’ll now have to help her with a rather… unique task, so it’s off to find some comedians.

When you’re done talking to the Fairy Godmother, head down the ladder and move to the right/west; there’s a hidden green chest up the tree beyond the large rock that contains a [POISON PINCH] . Also look for a regular chest next to a tree in this area for a [STRONG COFFEE] . Horace the ghost can also be found here, provided you’ve spoken with him and performed all tasks he gave you in previous towns. He wants to know what ingredient no burger can do without. Looking at pages 92 and 132 of the Wizard’s Companion should give a you clue: the answer is of course ‘Crispy Lettuce’. Horace will give you the [SAGE’S SECRET FORMULA (010)] instead of the Levitate spell (which you must seek out yourself).

Head back to town and look for Drippy’s brothers Surly and Smiley at the Cavity Club. After a hilarious dialogue (they ARE funny, but just don’t know it), you set off to find eight pieces of art. 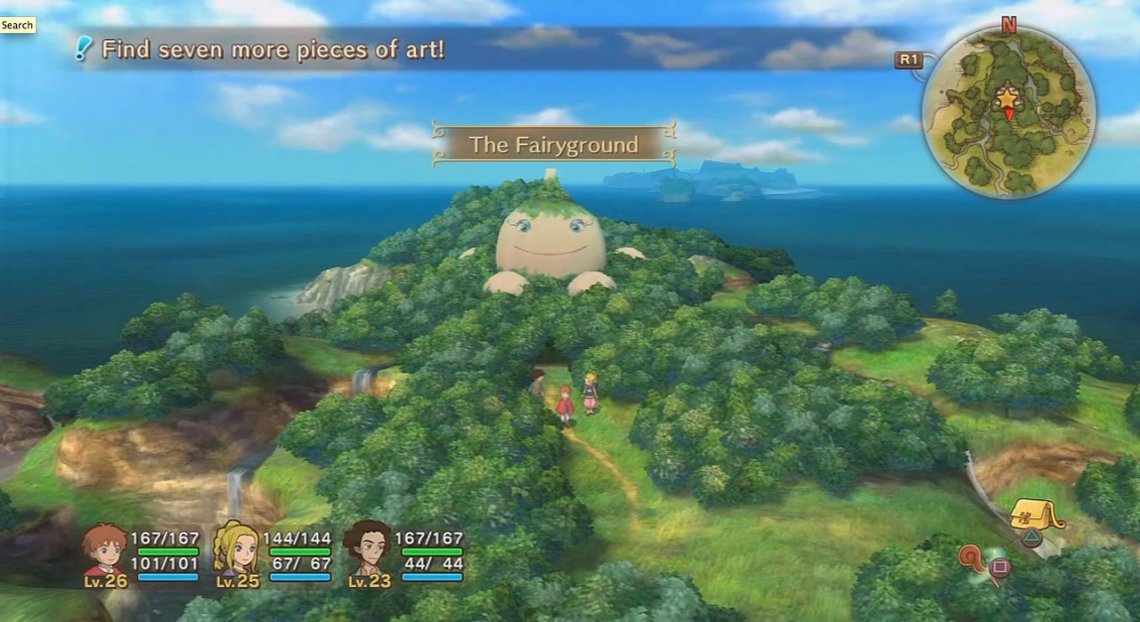 Before doing any of that, head back to the entrance of the village and speak to the seagull using ‘Nature’s Tongue’ to receive the [LEVITATE] spell. As for the pieces of art, the relevant fairies show up as light blue on your map, so they’re easy to spot.

The [PIECES OF ART x8] that you received are enough to continue, but explore the rest of town first. There’s a chest nearby the shop where you got the 8th piece of art, which contains [100 G] . 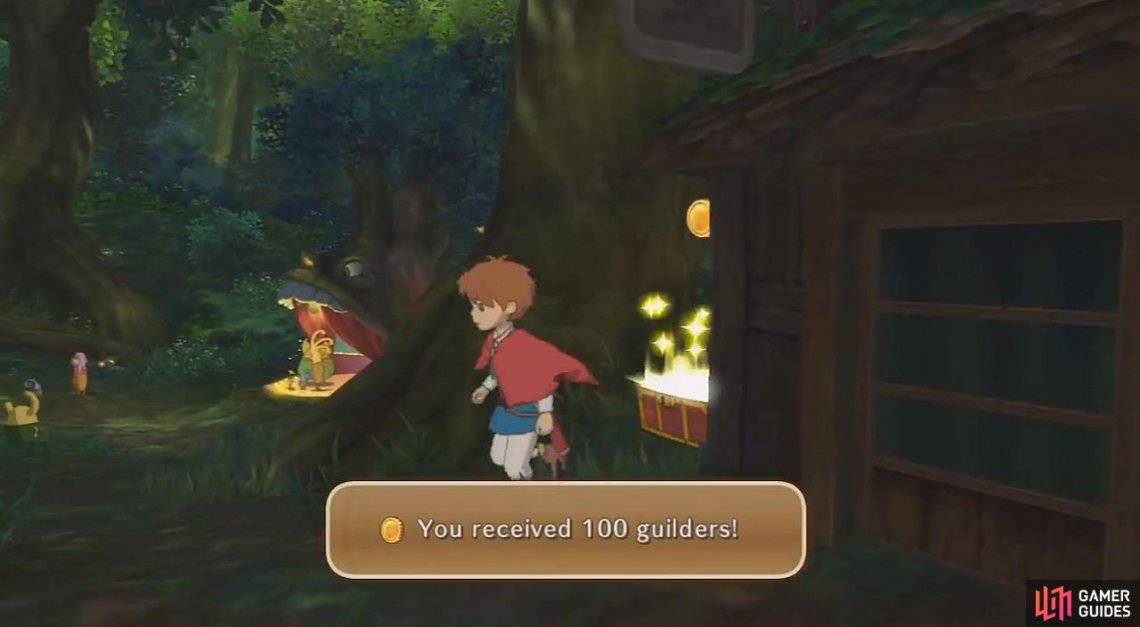 Directly opposite of it - behind a tree - is a blue chest with a [CHEESEBURGER] inside. There’s a last chest to the far west side opposite of the Cavity Club, at the start of the path leading to the northern bridge; it contains a [FISHBURGER]. 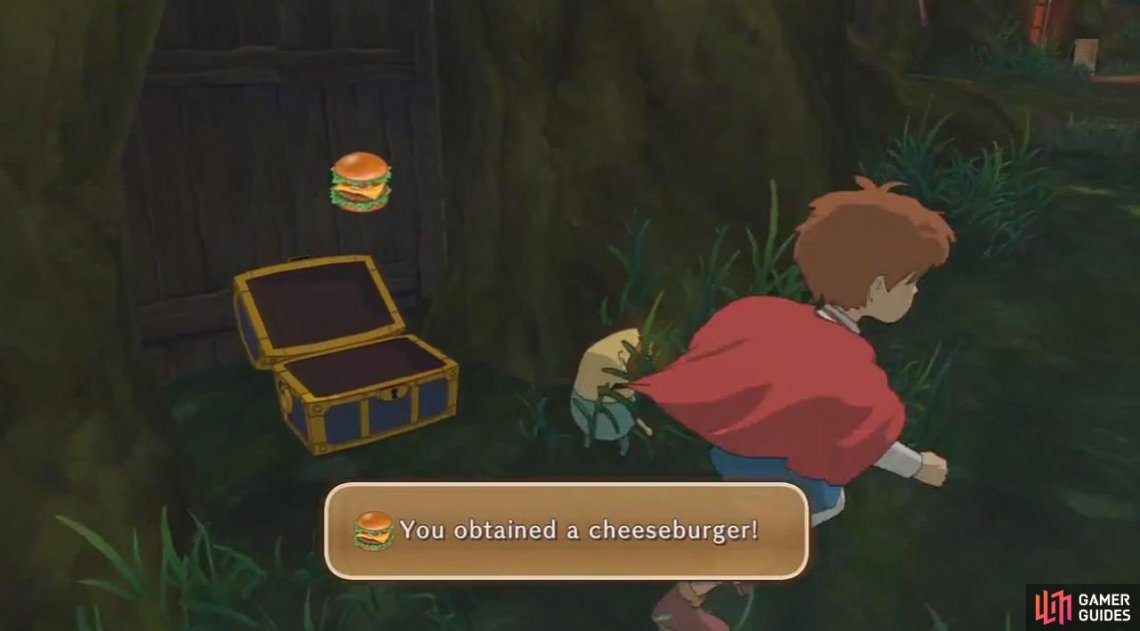 There are also two pieces of heart you can now collect. South of the Hootique lies the shop with a giant squid on top of it. One of its customers has some courage to spare, so stock up. Then there’s the fairy in the southeast corner of town (at a shop, near the small light blue neon stand) who has plenty of restraint, so be sure to grab some of that as well.

As always, getting a night of rest at the Cat’s Cradle nets you two more pages in your Wizard’s Companion, [TEEHEETI] and [THE FAIRYGROUND]. The Cawtermaster also sells decent wares, most notably the Gale Spear, Massive Mallet and Gale Robes.

If you hadn’t already, now’s an excellent time to create one or two Breezy Cloaks (Sea Breeze Cloak + Angula x2). When you’re all set, talk to Surly and Smiley twice to enter Mummy’s Tummy. 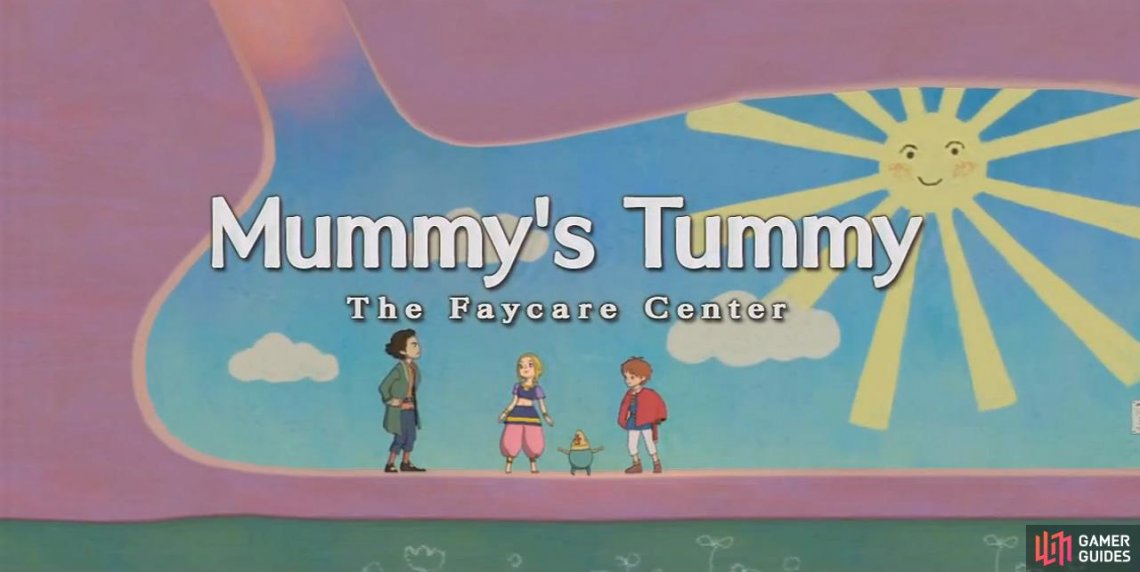 This is a straightforward area with several rooms in which you’ll have to fight creatures that have invaded the tummy and bullied the little fairies. It’s good to know that the fourth room from the left (the room without a picture on the door) contains a Waystone, so heal up after each fight and save your game before heading all the way to the right after the last battle.

It’s also a good idea to equip any Burning Blades you have, while unequipping any water-inflicting weapons. Breezy Cloaks are also an excellent piece of defensive equipment for the upcoming boss battle. When you’re ready, proceed to the right for an unexpected battle. 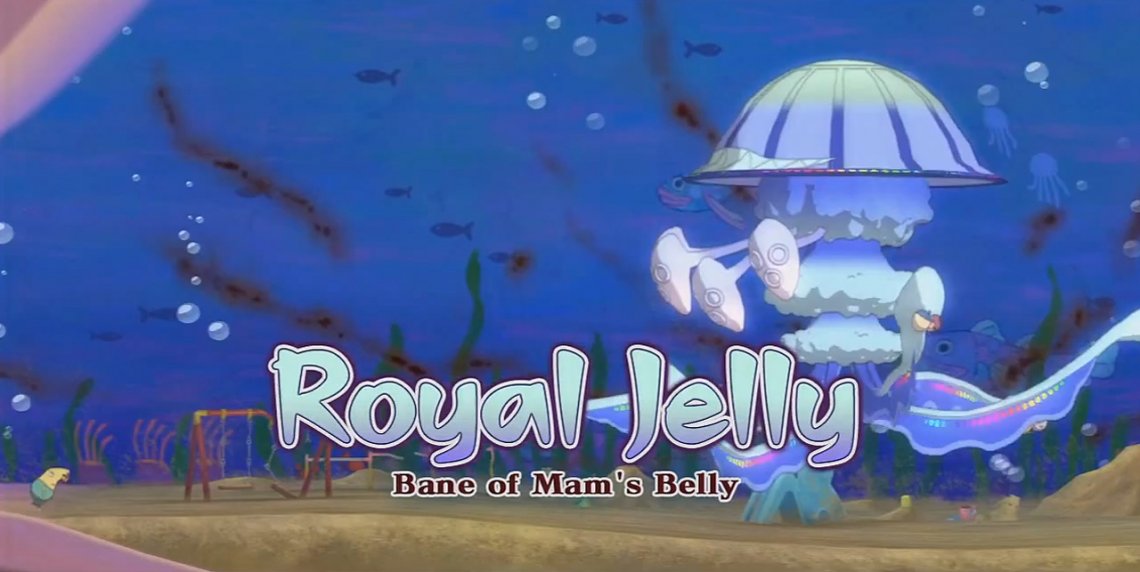 The fight with Royal Jelly isn’t too hard if you come prepared with the right equipment (defensive equipment resistant to storm, fire-inflicting Burning Blades). Its physical attacks are weak, although its See Stars attack (get the pun?) usually inflicts the confusion effect. Some familiars such as Thumbelemur have a natural resistance, but there’s a great chance someone will become confused at some point in battle. Fortunately, the effect usually doesn’t last long, as they get hit by attacks soon enough.

The Bolt from the Blue attack hits all your party members for a fairly large amount of damage, unless your familiar is equipped with a Breezy Cloak, which makes a large difference. When you see Royal Jelly prepare this attack, quickly launch an All-Out Defense command while defending with your current character or familiar. Afterward, healing up with Sandwiches is generally a good idea.

Baby Shower creates eight Jelly Baby enemies and will be used after you’ve depleted around 40% of the boss’s health. You’ll want launch an All-Out Attack command (since Royal Jelly herself is weakened for the time being) and have a familiar such as Mite use its ranged Cut Loose trick to greatly damage all the jellyfish at once.

There’s a rather big chance that a constant stream of attacks generates a Golden Glim; one of the AI controlled familiars might pick it up, otherwise do so yourself while controlling Oliver; his Miracle Move is a fire elemental attack and thus inflicts maximum damage. Using a familiar like Thumbelemur in the final phase of the fight should allow you to quickly finish off Royal Jelly with Go Wild.

After the battle you receive the Royal Jelly Page for your Wizard’s Companion and exit the Fairy Godmother’s tummy.

In any case you’ll also be given an enormous stock of spells by the Fairy Godmother: [SHIFT SHAPE], [SECOND SELF], [MIMIC], [VANISH], [WERECAT], [WEREFISH], [SHRINK], [OPEN MIND], [LOAF OF LIFE] and [POISON APPLE].

When you regain control, follow the star on your map to check on Drippy. Other than that, there’s not much to do in the village, so head back out to the world map, then head back to your ship.

Speak to Sindbah, who is pleased to inform you that the Sea Cow has been repaired and is ready to set sail once again. After getting aboard, several scenes play and Drippy learns the Tidy Tears trick, sometimes performed in battles. You also receive [THE THIRD TALE] of Wonder for your Wizard’s Companion. Better yet, a lot of errands can now be done by going back to The Fairyground. 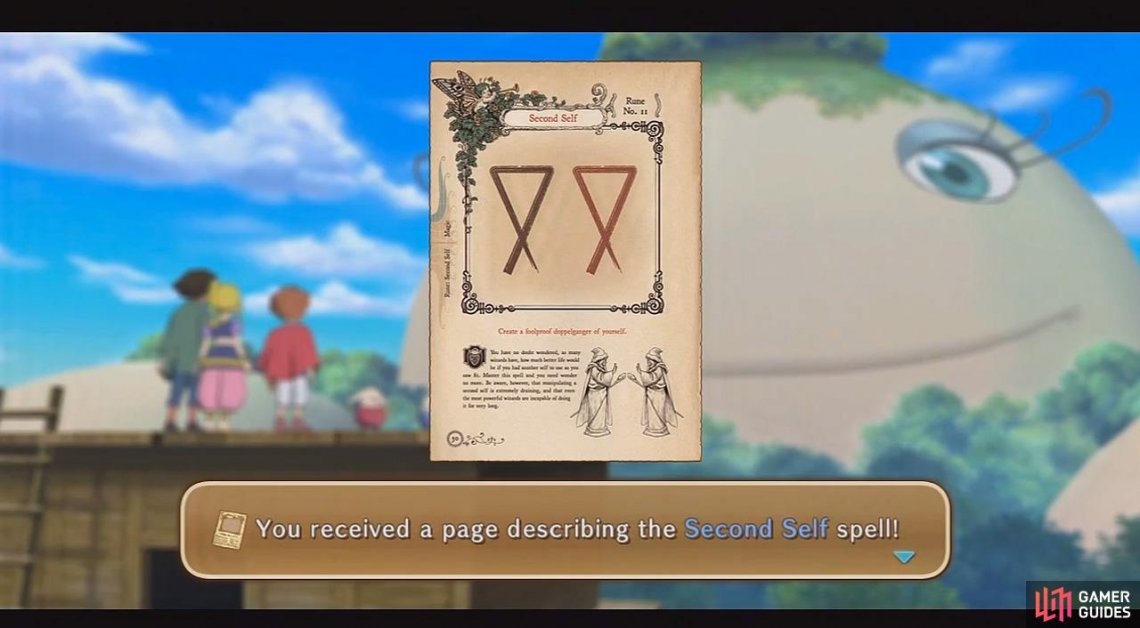 Now is an excellent time to metamorphose some more familiars into their second form if you haven’t already done so. You’ll gain a few levels during the errands that follow, but if you feel like that isn’t enough, take a little more time off to regain most of your familiars’ strength before proceeding with the story. Be sure to customize their tricks as they level up; you’ll unlock plenty of useful ones.