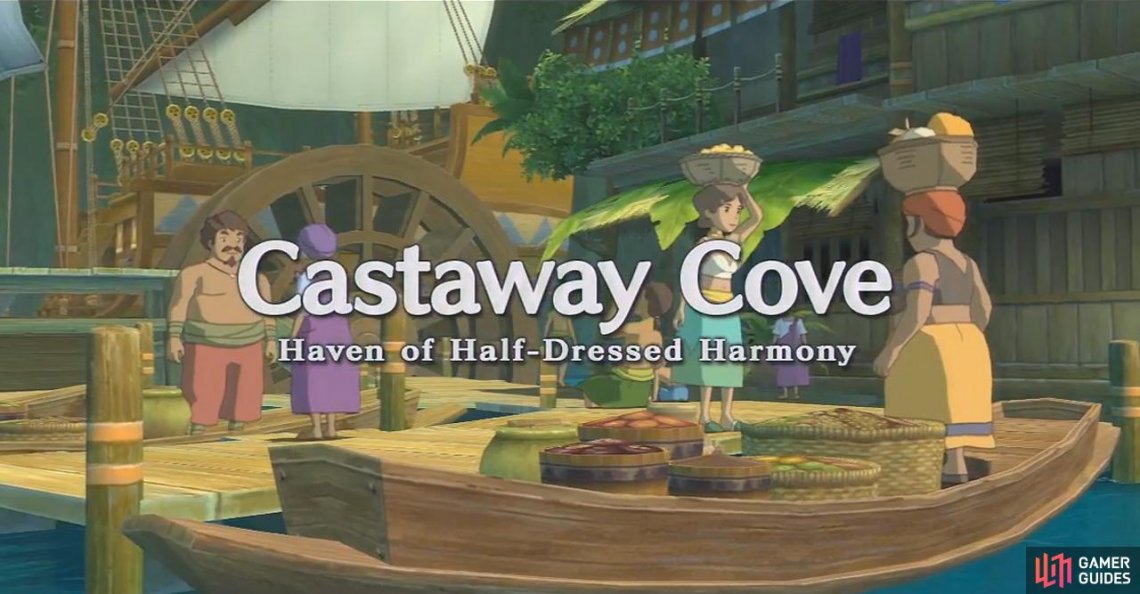 Castaway Cove can be found somewhere in the middle of the far south coastline. If you have trouble finding it, use your map for guidance.

As soon as you enter, a cutscene plays; you’re now supposed to chase the thief who stole the cauldron from a merchant. If your characters aren’t fully healed, visit the Cat’s Cradle (inn) first, because a boss fight is coming up. This also grants you [THE LOST CONTINENT] page, and while you’re here you might as well grab an [ICED COFFEE] and a bar of [MILK CHOCOLATE] from the pot and chest respectively (but not respectfully).

Head to the far east side of town and take the lower path to visit the docks. The thief is located at the last one; approach him and a scene will play, leaving you with the [PECULIAR POT]. Of course, poor Drippy’s the one to have to lug it on his back…

Return to the owner, who doesn’t seem to happy about all of this, then look at page 74 of your Wizard’s Companion to find the keycode that unlocks the cauldron: Open Says-A-Me. (Open Sesame, get the pun?) This triggers a scene and a boss battle. 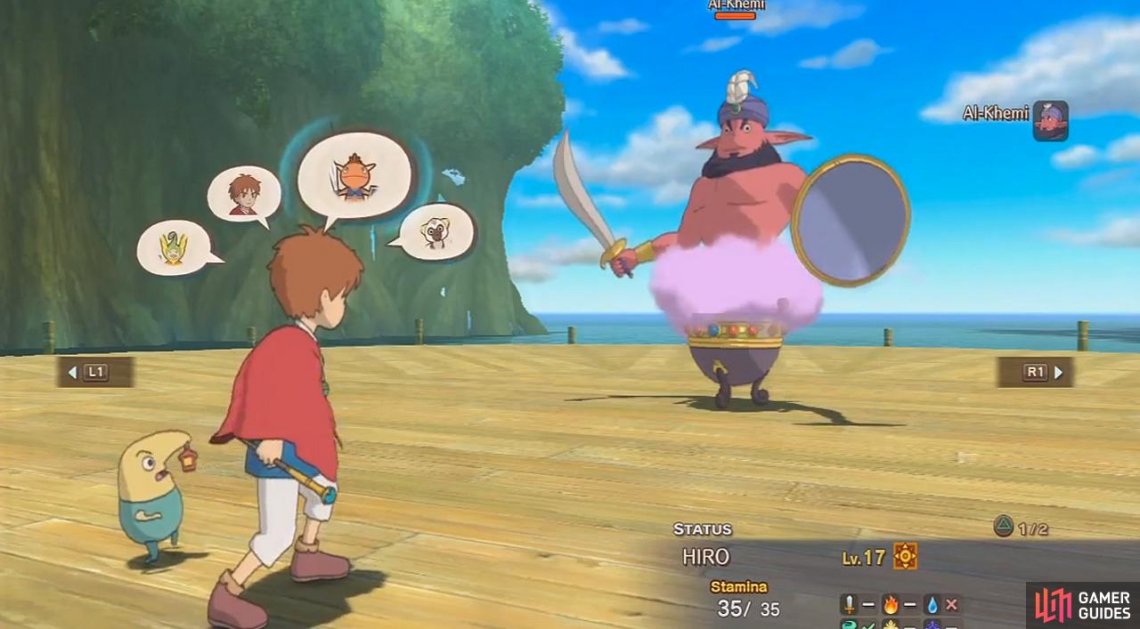 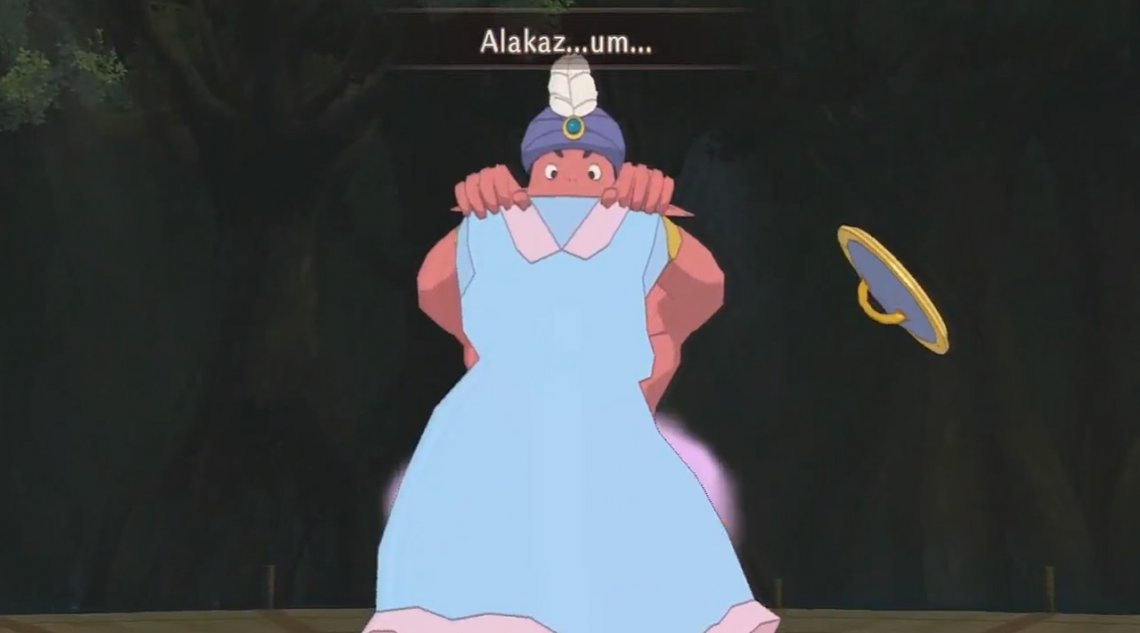 The fight against Al-Khemi is both funny and tough. Since his normal attacks contantly interrupt any physical attacks directed toward him, start your battle using Oliver and cast Pulse repeatedly, only breaking to heal either himself or Esther.

The fight against Al-Khemi is both funny and tough. His regular physical attacks deal some damage, but aren’t anything to worry about. His Al-Khombo attack, however, is very powerful and hits multiple times. Whoever Al-Khemi is facing will be the lucky target, so if he targets the character/familiar you’re NOT controlling, quickly switch to that character and defend.

The Alakaz…Um…. attack comes in two varieties. If Al-Khemi pulls out his burning sword, stay away, heal your party, and use long distance attacks such as Pulse. On the other hand, if he pulls out his parasol, rush in with your strongest familiar and whack him as much as you can. 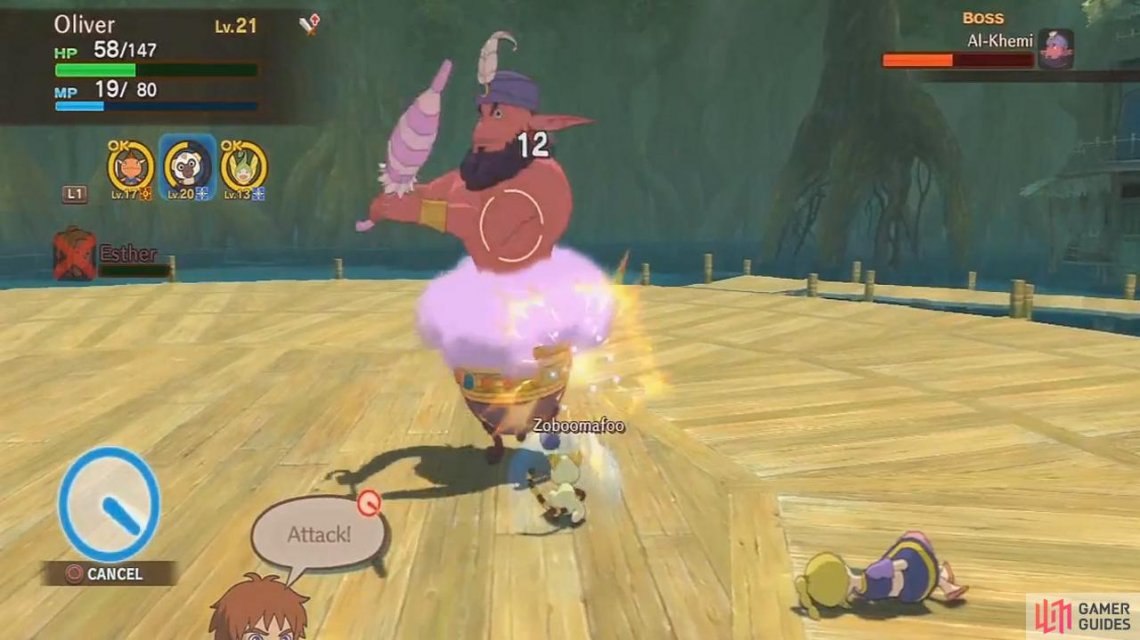 When Al-Khemi gets low on health, down to roughly 20% of his HP, he’ll dive into his cauldron with the Hubble-Bubble attack. It has a countdown of 10 seconds, so heal your party members and defend when the counter reaches 3 to minimize damage. Be sure to quickly heal up your other party member, then start attacking Al-Khemi again to finish him off.

After defeating Al-Khemi you’ll become his master; you get the [CAULDRON] , giving you access to Alchemy. Al-Khemi (get the pun?) also gives you a bottle of [PIXIE DEW] , a bunch of [SOUR GRAPES] , and [SLUMBERNOT LEAVES x3] . You have to combine these in the Alchemy tutorial, resulting in a [SPRITE DEW] , a great healing item that restores 200 HP to all party members. (You will also have gotten the [SPRITE DEW FORMULA (006)] , of course.)

Castaway Cove also houses various chests and pots. Return to the entrance as we’ll start exploring from that point. Head over the bridge to your left/ northeast to find a slice of [SWEETIE PIE] and [20 - 40 G] from the chest and pot respectively. Head east and look for a glimmering pot just before the curve which contains a [CAKE or CHOCOLATE or FLAN].

Head over the nearby bridge leading south and talk to Horace (who only appears if you’ve spoken to, and completed his assignments before). After casting ‘Spirit Medium’ on him, he’ll ask you to translate a piece of Nazcaän from your Wizard’s Companion. Look at page 13 and closely inspect the wizard’s robe to locate the symbols. You can translate these with the Nazcaän Alphabet (at the bottom right on the overview page of the book) to find that it reads: ‘Finest Fiber’. Give the answer to Horace and he’ll reward you with the [VACATE] spell, which allows you to teleport out of dungeons; rather handy!

Now make your way over to the docks and look for a chest on the right side at the bottom of the stairs to find a [SANDWICH] . There’s also a blue chest on the first pier to the north with a [FISHBURGER] inside.

Now’s a good time to do a few errands, although there aren’t all that many available. Stop by Swift Solutions at the northwestern end of town and make sure to activate all of ’em (why does the jerk Taskmaster get to stay fully clothed?) then proceed to your destination on the map. Talk to the man here–Sindbah–who sends you back to Al Mamoon to get permission from her royal highness Cowlipha to ride the ship.

(You can also sign up for the following bounties, but they can't be completed until quite a bit later.)

Description: A Castaway Cove fisherman has suddenly become scared of the sea, and refuses to get into his boat.

Goal: Restore his courage so that he can go our fishing once more.

Head to the piers and talk to the man in the southeast corner, who appears to be lacking courage. You’re in luck; the man on the boat at the first pier has an abundance of courage. Take some with the Take Heart spell and give it to the man to restore him back into his proper self.

Description: A Castaway Cove designer asked you to provide her with three rainbow leaves.

Talk to the tanned lady with purple jeans who’s walking around the first part of town. She wants you to collect three rainbow leaves by battling Florets with the Frostbite spell. Florets can be found in the Shimmering Sands desert, so you’ll want to hunt them down, killing them in the aforementioned fashion. When you have the leaves, return to the lady to claim your reward.

Description: A young girl in Castaway Cove asked you to create a candle cutter in your cauldron and show it to her.

Goal: Create a candle and show it to the girl. 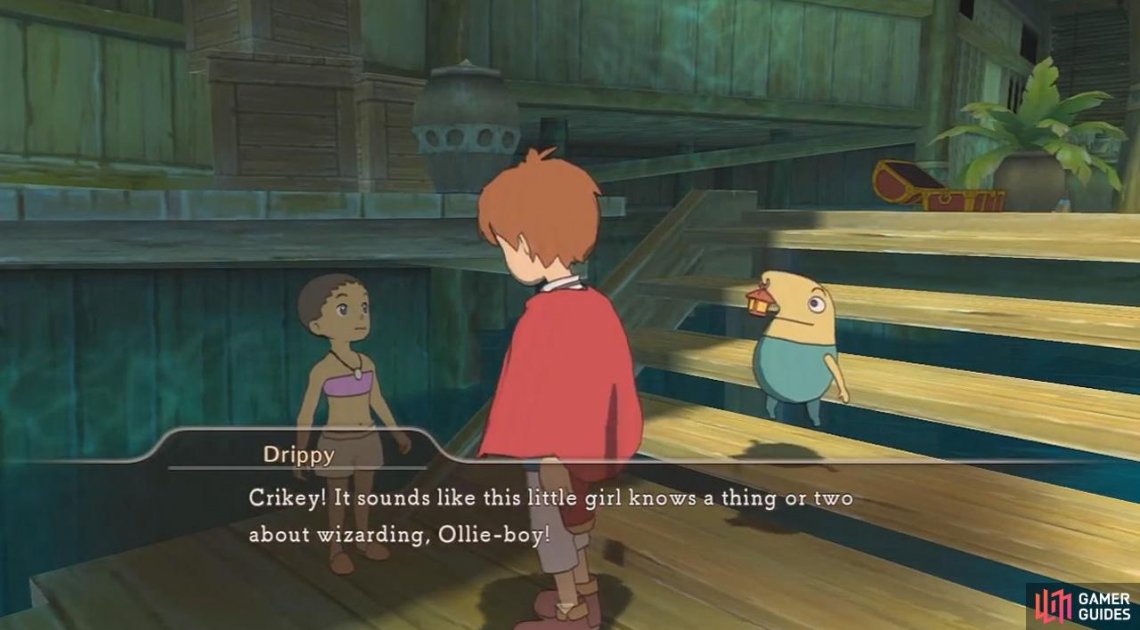 Talk to the small girl with pink bikini nearby the first bridge of the village. She wants you to make a candle cutter, but you’ll need several ingredients first. The first ingredient is easy to get: a Flint Dagger, which can be bought from the Cawtermaster in Al Mamoon.

The second ingredient, an Emberstone, can only be gotten from Mohawk enemies a little later in the game. They can be found on the Teeheeti island, and you can either steal the item from them, or wait for the creatures to drop one. Craft the candle cutter, bring it to the girl, and claim your reward.