Make your way back to the southern part of Ding Dong Dell and visit Swift Solutions to check the Errand Board, as well as find out what new Bounty Hunts are available.

After completing this new set of Errands and Bounties, you can afford to redeem your cards for an award! You can either get two of the ‘1 Card’ rewards, or one of the ‘2 Card’ rewards. We strongly recommend grabbing the ‘Jack Be Nimble’ award (so that you can move around faster on the World Map.) It’s best to save the other merit card for later.

Description: A man in Ding Dong Dell has lost all enthusiasm for day-to-day life.

Goal: Find some enthusiasm to mend the man’s broken heart.

Talk to any one of them and use the ‘Take Heart’ spell to acquire some extra enthusiasm. Once you have it, return to the man and talk to him, using ‘Give Heart’ on him to give him your enthusiasm. He’ll thank you and give you [WHITE BREAD x3] and [30 G] . 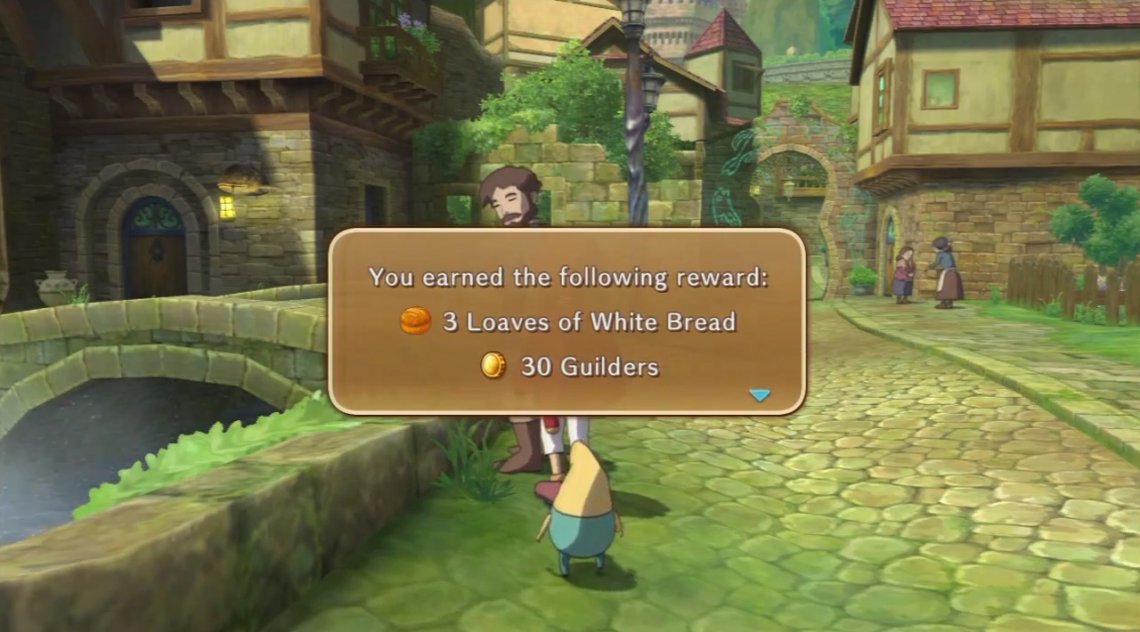 Description: A woman in Ding Dong Dell has completely lost her enthusiasm for keeping her house in order.

To begin this errand, talk to the lady standing just outside of Swift Solutions. She’s lost the will to do anything, so agree to find some Enthusiasm for her. There is one person in south Ding Dong Dell and two people in north Ding Dong Dell that have some extra enthusiasm; they’re marked in green on your map.

Talk to any one of them and use the ‘Take Heart’ spell to acquire some extra enthusiasm. Once you have it, return to the lady and talk to her, using ‘Give Heart’ on her to give her your enthusiasm. She’ll thank you and give you [CHOCOLATE x3] , [FLAN x3] , and [30 G] !

Description: A forest dweller tried to defeat the Rhinobores that were threatening his home all by himself.

To begin this errand, you must first find this mysterious forest. Take a look at your map; directly to the east of Ding Dong Dell is a path between two mountain ranges, with a forest right in the middle of that path. Just to the north of THAT forest is the one we need to visit, so head east to the smaller forest, then north of it to arrive inside.

Once you’re in the forest, approach the blue chest to the northwest and use your ‘Spring Lock’ spell to obtain a [BATTLER’S BADGE] accessory. Feel free to equip it, then talk to the boy beside the chest. He’ll tell you that five Rhinobores are destroying their homes, so you’ll be the one to slay the beasts.

Back out on the World Map, you’ll see all five of them surrounding various parts of the forest. They are actually pretty easy; just go into battle and let your Thumbelemur have a sparring session with each one to quickly knock them out. Once they’re down, return to the forest and talk to the boy again to receive your reward: [ICED COFFEE x3] and [50 G] ! 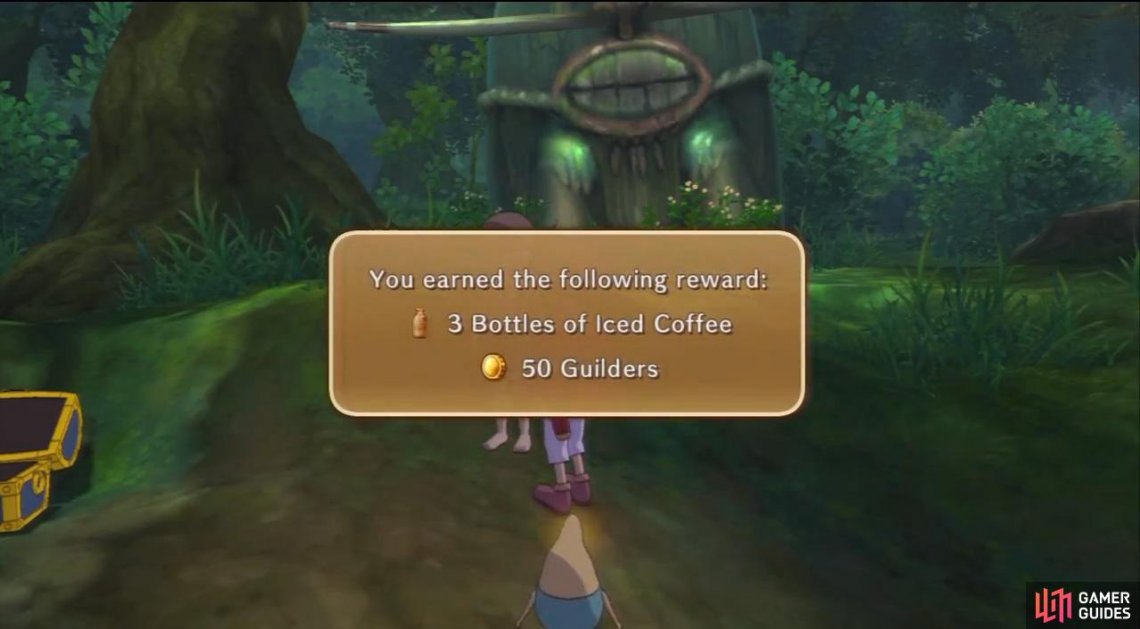 Description: A man visiting Ding Dong Dell is rather flustered after misplacing his diary.

To begin this errand, talk to the traveller standing just outside of the Cat’s Cradle, and he’ll tell you that he keeps his journey recorded in his diary, but he can’t seem to find it. Agree to help, then head out to the World Map to find it.

He said he sat down beside the river northwest of Ding Dong Dell, on an island with a couple of trees. If you look at your map, you should see it; it’s on the corner of the stream to your north-northwest, just south of the large lake to the far north. There’s a skeleton nearby to the west-northwest. Make your way to that island and examine the ground near the trees to find the [TRAVELER’S DIARY] . 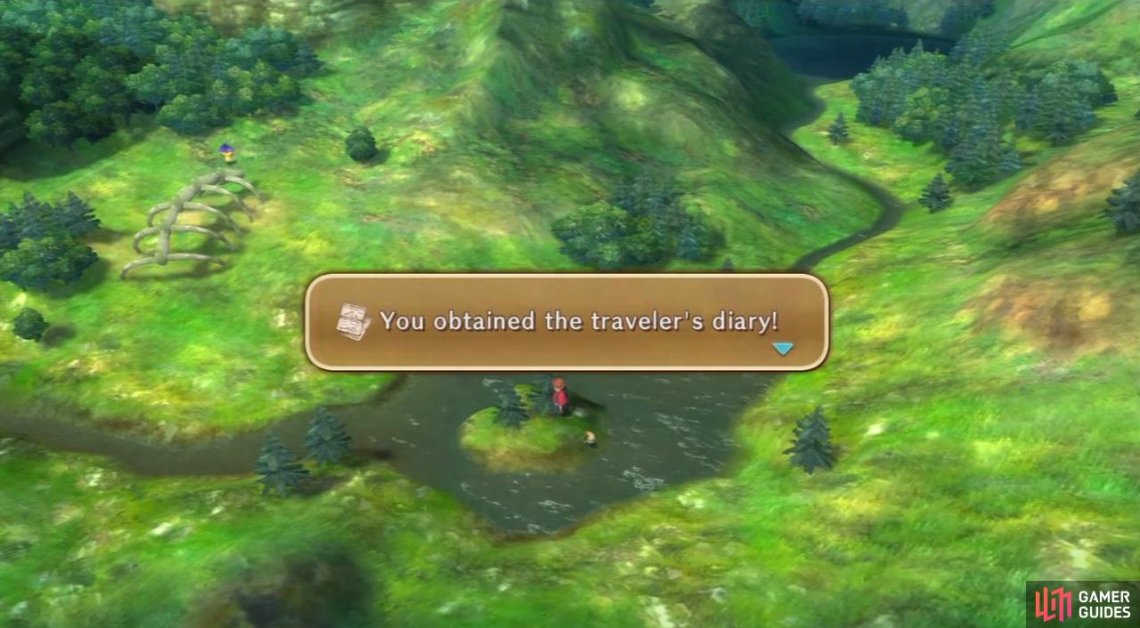 Return to Ding Dong Dell and deliver the diary to earn your reward of a [GIANT’S TOOTH] and [50 G] . 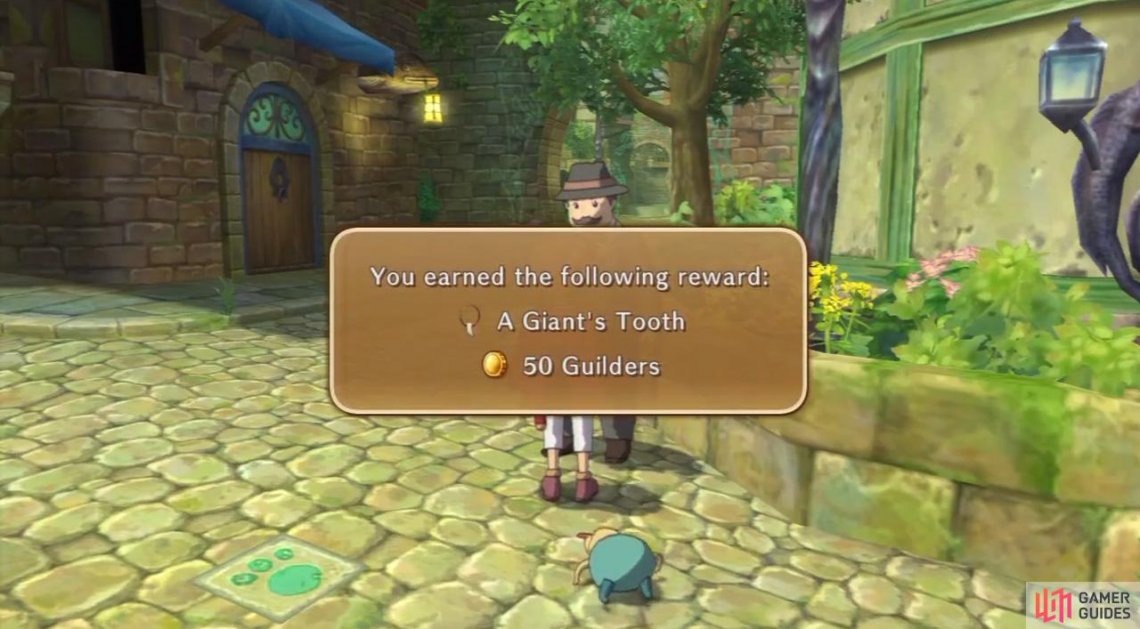 Description: A winged beast is tormenting travelers making their way into town. It must be dealt with before it injures someone!

Out on the World Map, you’ll see your target to the far west of Ding Dong Dell, so make your way over there to end the Grumpeafowl’s shenanigans.

Start off by casting Frostbite on each of the Sleepeafowls to dish some major damage to them, followed by switching to your Thumbelemur to take them out, that way they don’t put you to sleep and give themselves a chance to gang up on you. Once you have those annoyances out of the way, let your familiar ravage the last of the fowls until he falls.

There’s something else to do before departing. Depending on whom you received your Enthusiasm from, one more person should be left with some of it. Check both south and north Ding Dong Dell for a glowing green dot and talk to that person to get a bit of Enthusiasm for the road (with the ‘Take Heart’ spell, as you know by now).

Before continuing on with the story, we also have one more chest that we can open now that we couldn’t earlier, and we need to tell Old Father Oak our progress, so from the World Map, make your way to the far north and re-enter The Deep Dark Wood.

First off, go ahead and make your way all the way north to Old Father Oak, who will give you [MILK CHOCOLATE x5] to reward your growing familiars.

Now is an excellent time to give your familiars some treats. The Milk Chocolate bars will increase their attack, and by now you should have plenty of other treats for both Mite and Thumbelemur. You don’t have to spend all your treats at once (and probably can’t anyway), but it’s worth your while to at least give them some of it.

Head back to the fork and go northeast, following the path for a long while until you come to the fork just after jumping over the rocks in the stream. To your southwest is that blue chest that we had to skip earlier, so make your way up to it now and choose ‘Spring Lock’ from your Spell Menu to open it and obtain a [CREAMY FLAN]. 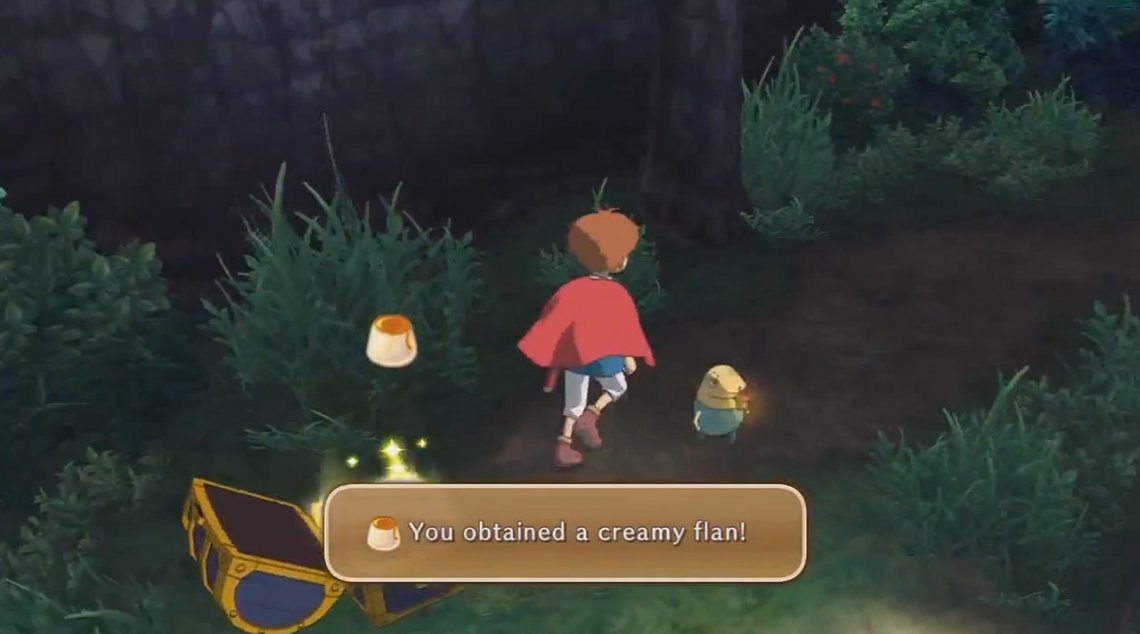 That’s all you can do here right now, so let’s get back to the story. Make your way back to the entrance and head out to the World Map. Our destination is the Golden Grove to the far southwest of the map, so make the long trek there.