Do so and head to Oliver’s house to the south. Go inside his room to find Pea; afterward, head inside his mother’s room and check the drawers in the lower corner of the screen to find a new page for your Wizard’s Companion [THE YOUNG WOMAN’S JOURNAL] . When you’ve done that, cast Gateway to head back to Another World.

You’ll return to Ding Dong Dell after various scenes, and you’ll have to destroy the crystal producing the foul manna, so head directly for the King’s Castle (there are no new treasures to be found). Unfortunately, the Veil spell doesn’t currently work, so you’ll have to avoid enemies manually should you desire it. Be sure to save your game at the waystone right before entering the castle, because a boss fight is coming up.

It’s important to know that once you’ve depleted the kind’s health bar, it will refill again completely, leading the battle into a second, much more difficult stage. Definitely play defensively whenever you see Crazy Claws being prepared. Royal Roar is also powerful, but can at least be avoided. 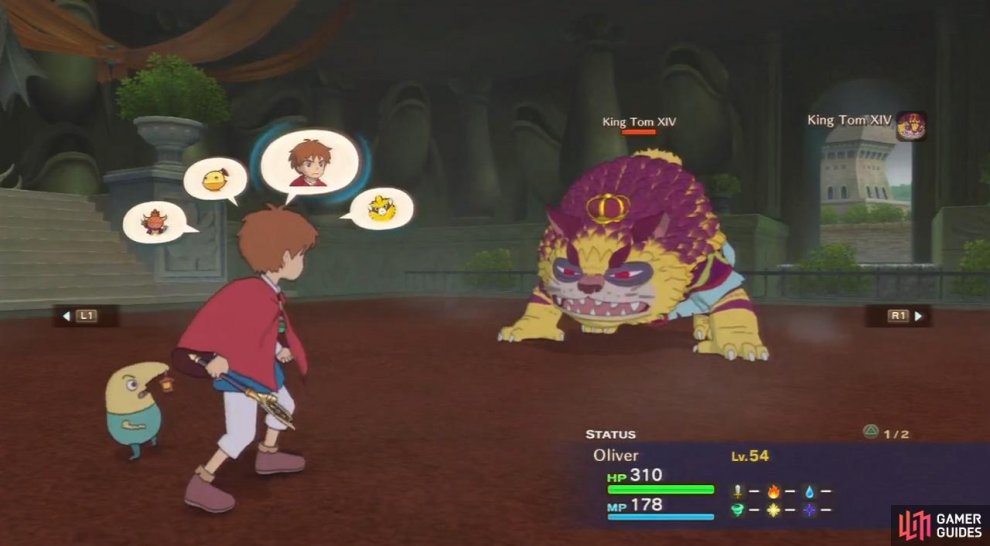 During the second stage, Tom will use Cat Slap instead of Royal Roar. It’s a very powerful attack against a single target, so you’ll want to defend and/or heal that target. The Itchy Scratchy attack is definitely worth defending against, since it deals major damage and also inflicts your characters with poison. Keep your health up with powerful healing spells and items and don’t be afraid to use Phoenix Feathers when required.

After the battle a batch of scenes plays and Ding Dong Dell will be pure again. You’ll also receive the [FLOWER OF YOUTH] .

Tip: You can go visit Horace at the monument to the northeast of the town square and solve another riddle; this time the answer is: Unleash. You’ll be given the [THUNDERSTORM] spell.

Now travel to Al Mamoon and make your way to the castle, only to find out that her Moojesty has also been converted into a horrible creature (to think that it was possible, but alas… yes.)

Again, it’s important to know that Queen Lowlah too will heal her health bar in it entirety after depleting it once, as the second stage of the battle starts. The first stage shouldn’t be too difficult; you’ll want to move to the queen’s back and attack her (from) behind.

This should allow you to avoid most of her physical attacks, as well as her beam-type Haughty Snort. Her Royal Rush targets a single target; defend from it if she’s targeting the character you’re currently controlling, otherwise go for an All-Out Defense. The second phase is somewhat more difficult than the first. Her Haughty Snort has been replaced by Haughty Huff, but that’s just as easily avoided. More dangerous is her Flying Cow attack, which aims for the entire party; always defend whenever you see the queen preparing something.

Drippy will tell you that it’s possible to weigh the queen down with Burden. This is a good idea; successfully doing so will stun her and generate golden glims if you go in with an All-Out Attack. If you keep your party healthy and stick with the strategy from the first half, victory will be yours. 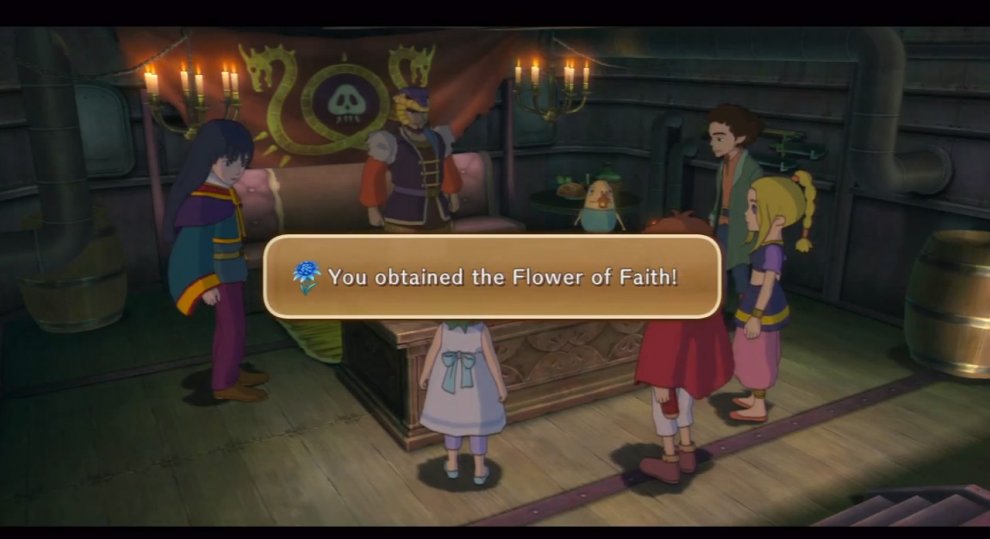 After the battle, various scenes play. You’ll also receive the [FLOWER OF FAITH] . It’s now time to restore the third kingdom, Hamelin, so travel there and start making your way to the far north of town. Heal up at the waystone and prepare yourself for another tough boss battle.

Note: This is your last chance to battle wretches. If you’re aiming for a complete file, be sure to battle all (ten) varieties now before moving on.

Before you move to the palace’s main hall, you’ll want to equip your fighters with storm-based weapons, even if they’re slightly worse in terms of attack power than your best pieces of weaponry. Continue to the main hall to face Hamelin’s most deadly machine, Porco Loco. 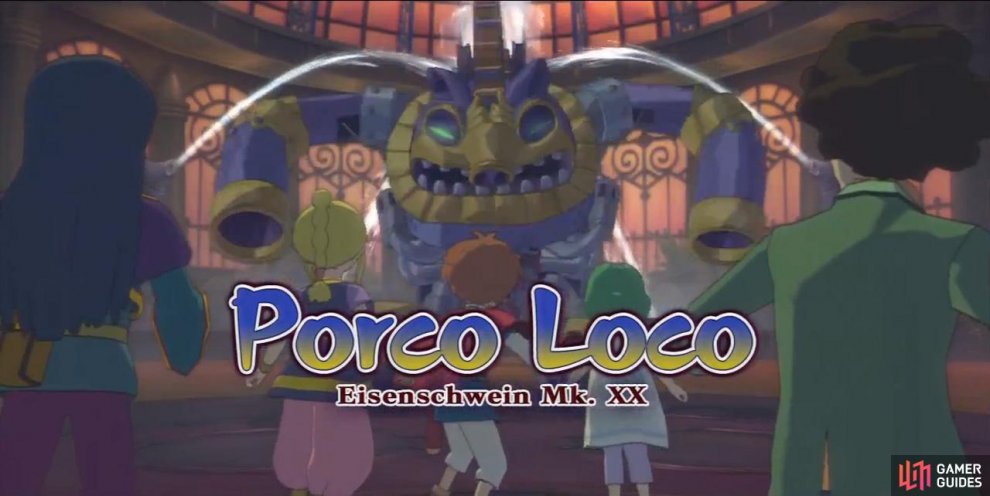 The fight against Porco Loco - again - consists of two phases, the first being considerably easier than the second. Its physical attacks aren’t too powerful, and its Pigswill trick (and Pigshot in the second phase) only targets a single ally. 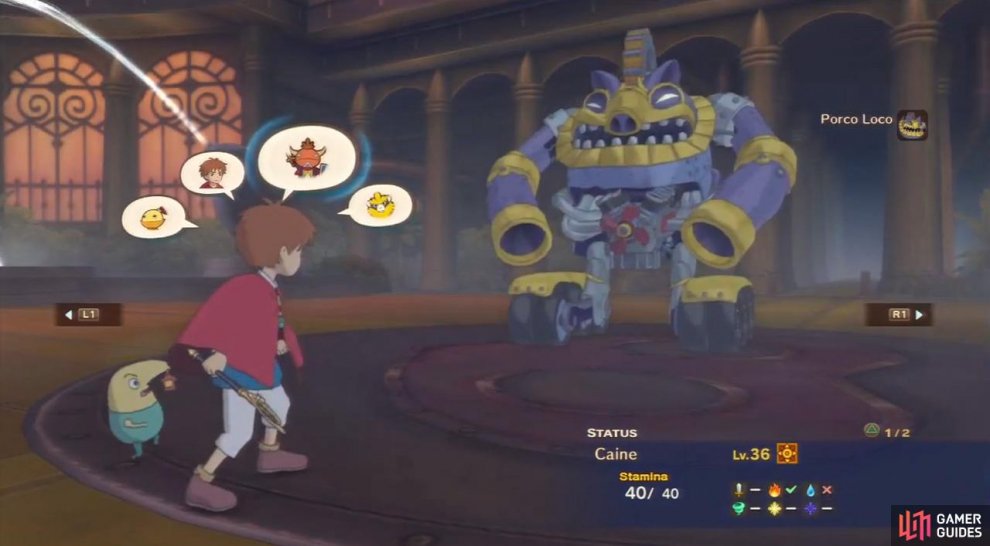 Much more dangerous is its Pork Scrappings attack, only used in the second phase of the fight, which targets all allies and deals quite a lot of damage. When you see it coming, order an All-Out Defense and Defend with the character you’re currently controlling.

Cancelling its weaker Pigswill/shot can net you quite a few glims, and abusing its storm weakness with a spell such as Thunderspark (which a familiar such as Drongo has access to) might stun the boss, giving you plenty of time for a flurry of attacks, cutting golden glims loose in the process.

Stay healthy in the second phase of the fight, and keep fighting offensively unless the boss prepares Pork Scrappings; timely switch to an All-Out Defense and you should make it out of the fight alive. You’ll receive various alchemy formulas after the fight, as well as the [FLOWER OF HOPE] . After the scenes you can finally make your way to the hidden continent on the southwest of the world map.