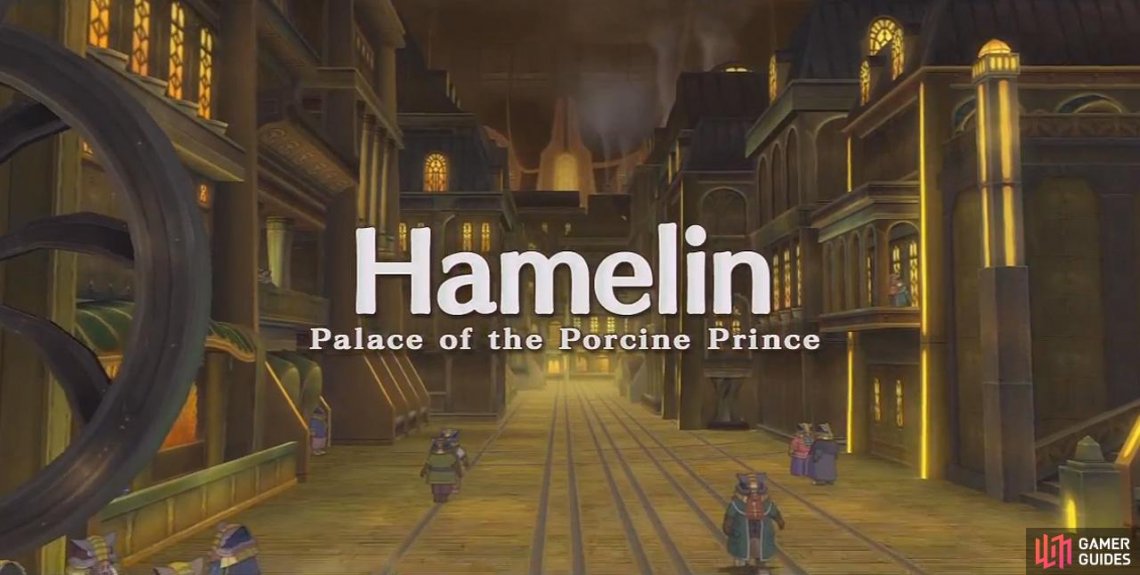 Directly north of this vantage point (but still in the southwest corner of the northern part of town) one can find a pot with [30 - 60 G] inside. There’s also a blue chest in the southeast corner of this same section; it contains a [CHEESEBURGER] .

Head back to the east part of town and look for a pot in the corner opposite of the Cawtermaster to find a [SALTED ICE CREAM or SOUR SUNDAE or SWEETIE PIE] . You can find a chest with [STRONG COFFEE] inside the Cawtermaster’s building. 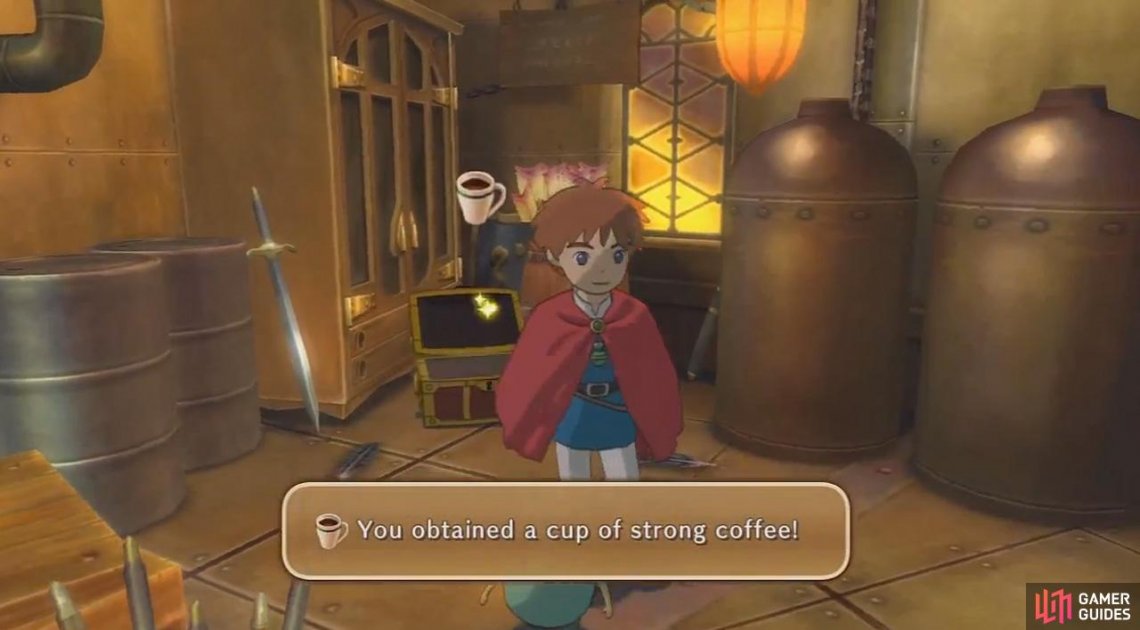 Be sure to buy most of the latest equipment; there are some fine pieces of armor and weaponry among the wares. If you’re short on cash, reconsider whether you want to buy the latest ax or craft your own (which is better, but does require a lot of ingredients - see below). The same applies for the Grunt Armor (although it does grant a nice attack bonus). 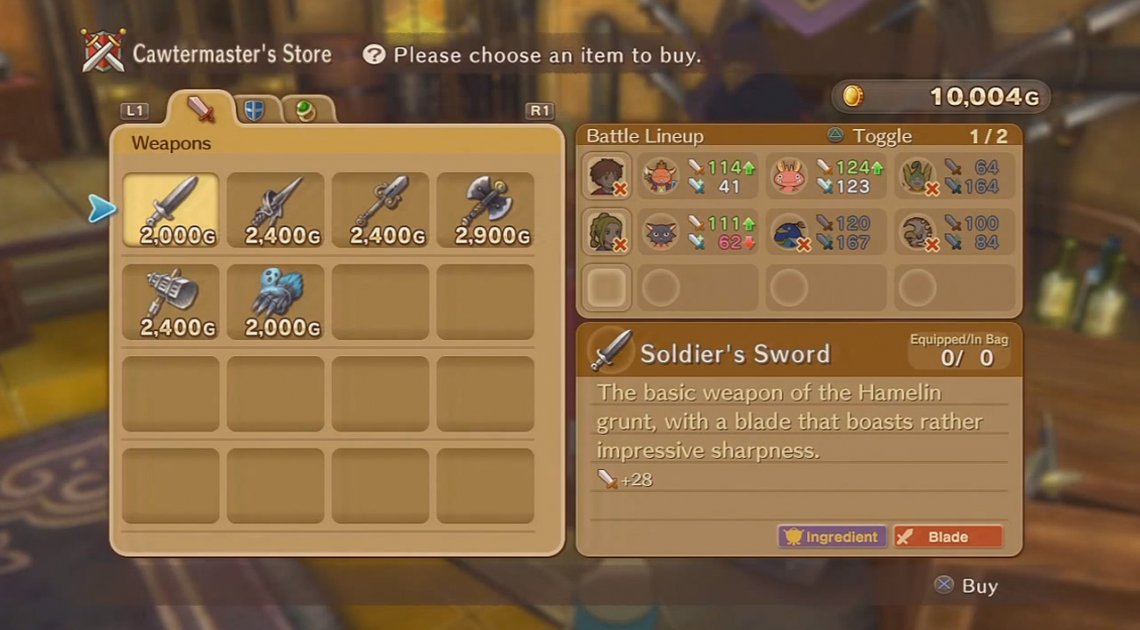 As soon as you enter the city, Swaine leaves the party. Follow the path to the east and join up with him after several scenes. Head north and speak with the guards that - who would’ve guessed - aren’t allowing anyone in the palace. Now’s a good time to explore the city of Hamelin, and there are various errands and bounties you can pursue as well.

Starting off in the northern area, look for a pot on the northwest side of the street to find a [CARNATION CAKE] . The chest to the far southwest (of this northern section of town) contains a [CONFUSION-BE-GONE] , and there’s also a green chest far up the eastern building nearby. The vantage point for this chest is slightly east of the south-westernmost street lantern; look east to spot the chest on one of the balconies. It contains a [CLOCKWORK CLEAVER] , a highly offensive sword that reduces magic attack and accuracy but greatly boosts your familiar’s attack stat. 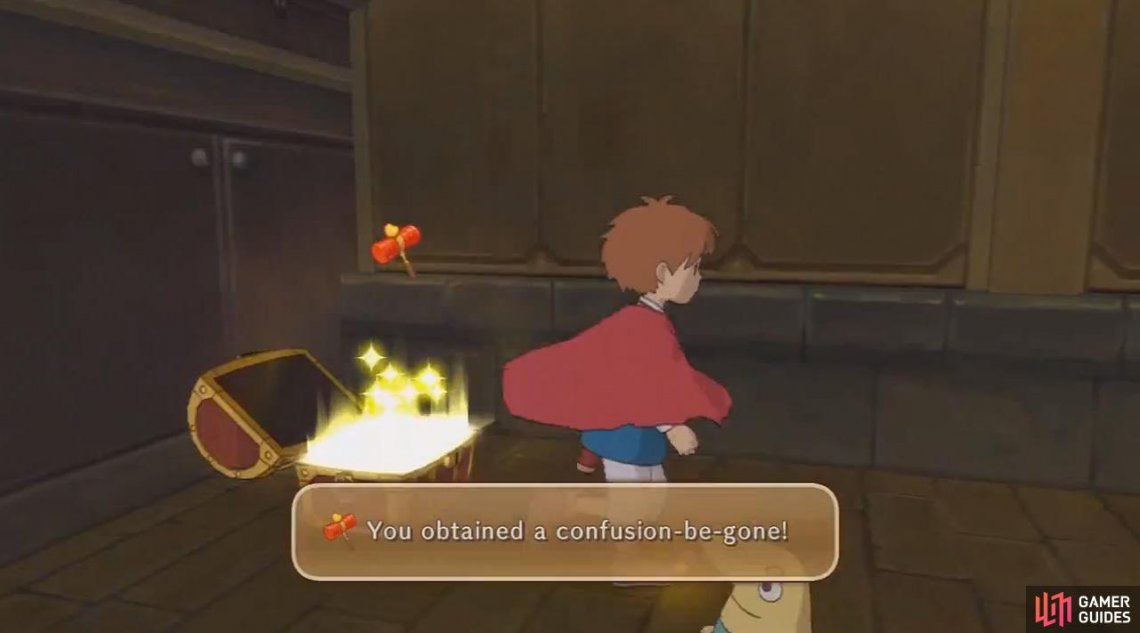 Here are some useful items you may want to make with alchemy:

Make sure to also chat with Horace, who’s looking over the town from the balcony near the Hootique. The answer to his new riddle can be found on pages 212-213 of the Wizard’s Companion, and the number of automata familiars is of course 5. Give him the answer and he’ll reward you with the [CHART CHESTS] spell, which marks unfound chests and treasures in dungeons and towns (but not on the world map, unfortunately).

There are a few more pots you haven’t found yet, so go ahead and cast the chart chests spell to locate them more easily. There’s one next to the Cat’s Cradle on the right side that contains a [CURSE-BE-GONE] , and heading down the west path of town makes you run into the remaining pots, which holds [30 - 60 G] and a [BABANA FLAN] respectively (the last one is on the left side of the stairs around the corner). Lastly, check out the Hootique to find a chest with a [NIX-BE-GONE] item inside.

With all of those treasures out of the way, time to take on some tasks at Swift Solutions!

Description: A young man from Hamelin is being uncharacteristically unkind to his little sister.

Goal: Restore the man’s kindness so that he can continue his work.

The man standing near the entrance of the black market has no kindness left for his little sister. You can collect kindness from the man in a green coat walking around the northern part of town. Claim your reward as you exchange his kindness to the man lacking it. This also unlocks errand #055.

Description: A Hamelin man has suddenly become terrified of the woman he wants to marry.

Goal: Give him the courage he needs to propose.

Talk to the man standing in the northwest part of the main street (northern section of Hamelin) and ask him what’s the matter. Looks like he’s missing the courage to propose to his girlfriend. Unfortunately, courage is a rarity in Hamelin, so this errand will have to be postponed for quite a while.

Description: One of the travelling merchants is having trouble controlling her appetite.

Goal: Restore her missing restraint before she bursts!

Talk to the lady of the traveling merchant pair at the balcony overlooking the main street (in the center of town). Looks like she’s missing restraint! Fortunately for her and for you, this is the easiest quest in the game, as the man standing a few feet away has more than enough of it. Ka-ching! 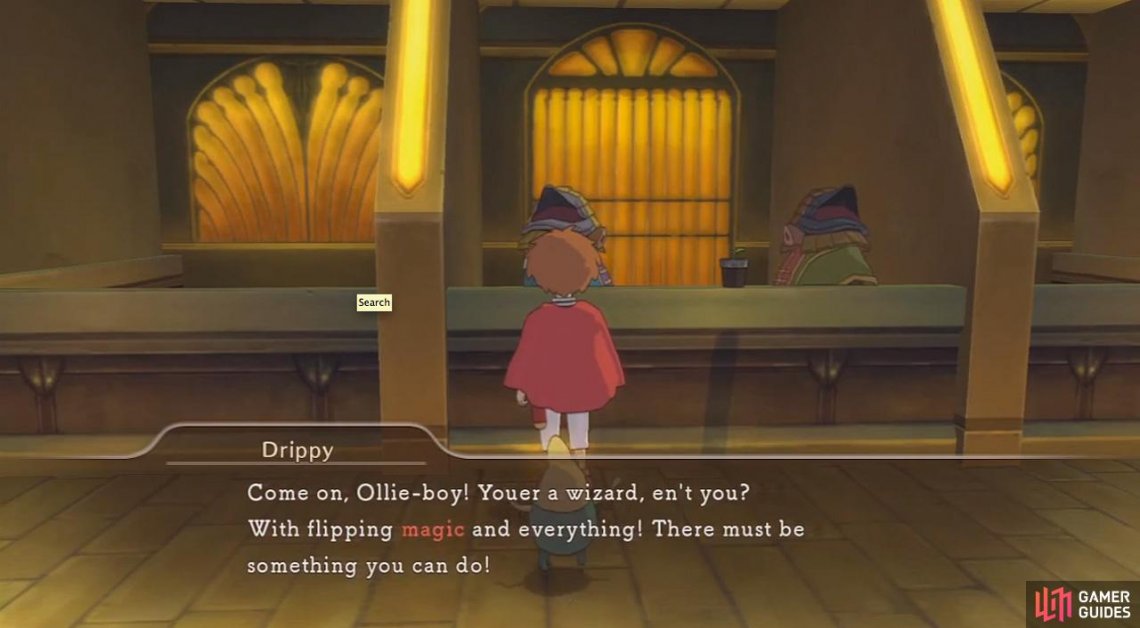 Description: A Hamelin lady wants to give her mother a flower for her birthday, but it doesn’t look like it will blossom in time!

Goal: Solve the woman’s problem using one of your spells.

On the main street (northern section of Hamelin), talk to the lady on the balcony just south of the stairs leading up. Her plant won’t blossom and it’s supposed to be a gift. Inspect the plant and cast the ‘Quicken Growth’ spell. Since it doesn’t work, you must either fetch a Sunshine from your Familiar Retreat, or go back to the Shimmering Sands to catch one. Return with it and the flower will blossom.

Description: A Hamelin researcher is beside himself with worry, as he lacks the materials needed to make medicine for his ailing sister.

Goal: Agree to help the researcher with his problem.

Talk to the man near the black market and agree to help him find the missing ingredient for the medicine he’s making. Check your inventory to see if you have any Carrot Cakes left (one will suffice). If not, create one through alchemy by using a Cake + Crunchy Carrot x3 (and if you don’t have those ingredients either, buy them from the Hootique).

With a Carrot Cake in your possession, head to the forest on the far west side of the continent and enter the hidden forest glade. Talk to the single lady and swap the cake for a [FEEL-GOOD FUNGUS] . Simply return to the man and claim your reward.

Description: A Hamelin researcher is anxious because he’s unable to deliver his sister’s medicine to her.

Goal: Agree to help the researcher with his problem.

The researcher’s perils are not yet over, it seems! Pirates in the sea between Hamelin and Castaway Cove are preventing him to bring his medicine towards his sister, so you’ll have to take it for him, right? Nope! That would be too easy, now wouldn’t it? No… You’ll have to kill ALL the pirates on ALL four pirate ships so that the researcher can bring the medicine himself.

Finding the pirate ships is easy; make sure you initiate each fight by approaching the back of their ships to get the upper hand. An All-Out Attack should make it possible for you to wipe out at least one of the three to four Zomboatswains you’re up against. The last fight also includes a tougher Cap’n Zombo, so pay closer attention to your health and start using group attacks.

You might want to rest in the Cat’s Cradle (in Castaway Cove) between battles if you get severely hurt; otherwise these battles are manageable. Once they’ve all been defeated, return to the researcher in Hamelin to claim your reward.

Description: Derwin has moved on to Hamelin in search of more creature data.

Goal: Agree to help Derwin with his research.

Derwin the researcher can be found next to the Cat’s Cradle, and he requires you to fetch three familiars for him. They can all be found on Autumnia: Tin-Man, Sprog Cog and Clinketyclank. Unfortunately, the chances of catching them are not good; 6 to 8%. You’ll have to fight MANY battles before finally having caught the three familiars Derwin requires. When you finally do, return to him with all of them in your party or reserves.

Description: A discarded machine has come to life and turned into a monster… A sorry tale, but this is no time for sympathy!

Last Seen: On an Iron Bridge Southwest of Hamelin (Autumnia).

This bounty is located on the long tracks crossing the ravine south of Hamelin. It’s a surprisingly easy fight, especially if you wipe out the lesser Clinketyclanks first. Storm attacks work wonders against Steam-Man, although they’re no necessity either.

Description: A rowdy beast is attacking cargo ships as they pass beneath some steep cliffs. Drive it away, and fast!

Last Seen: On Some Cliffs South of Hamelin (Autumnia).

Fluvius Maximus can be found in the ruins to the far south of Autumnia, near the beach you left the Sea Cow. It’s got a fairly large amount of HP, but that doesn’t necessarily make this a hefty battle. It resists water and is weak against fire, so a Burning Blade can make a nice difference. Keep launching All-Out attacks and the battle should be over before it has begun.

When you’re done with any errands and bounties you wanted to complete, head to the black market in the southwest corner of the city. Talk to the man inside, and you’ll receive four suits of [HAMELIN ARMOR]. With it, you’ll be able to use it to sneak past the palace guards to the far north, so make your way there now. 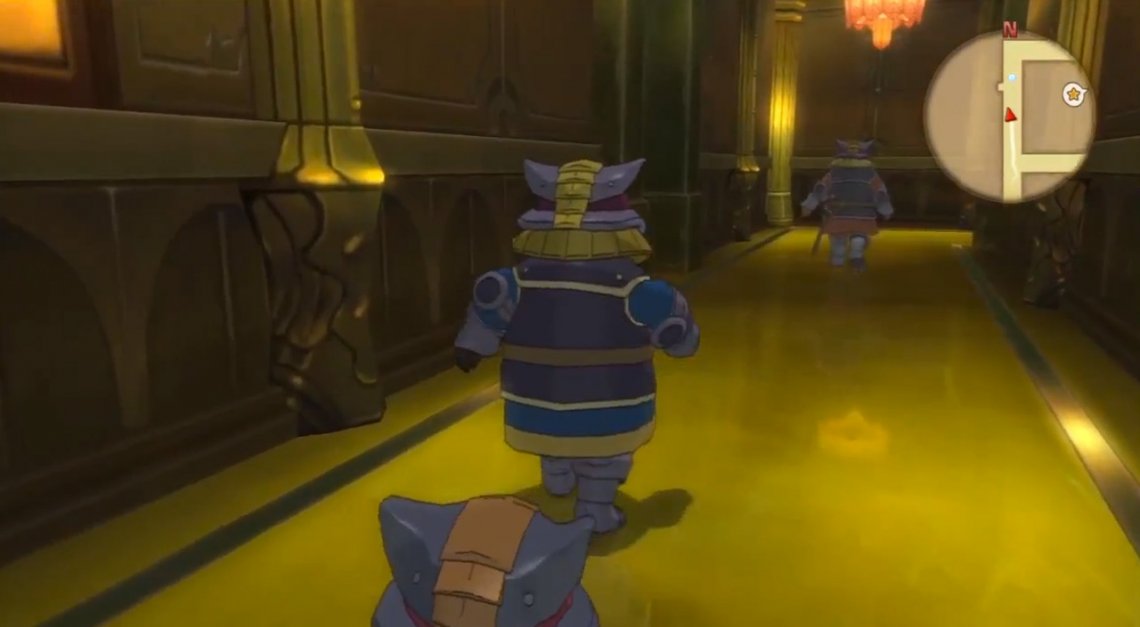 Inside the palace you’ll have to sneak past several guards, which is easier than it looks. 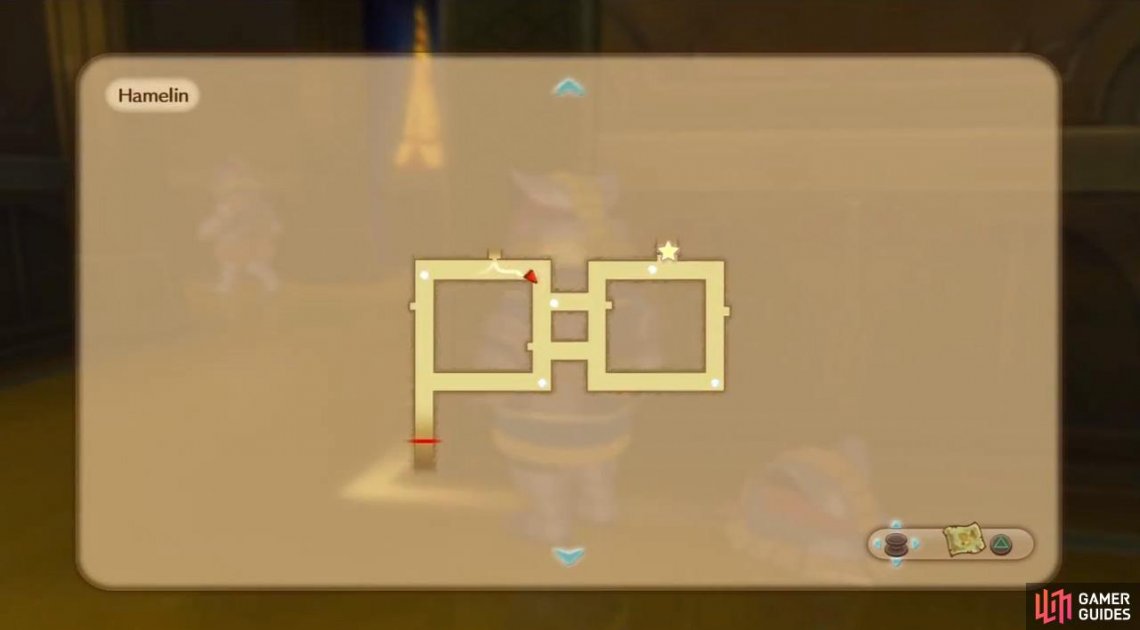 Following the above map, perform the following steps:

Note: Guards can only see half a hall at a time, and cannot spot you in alcoves. 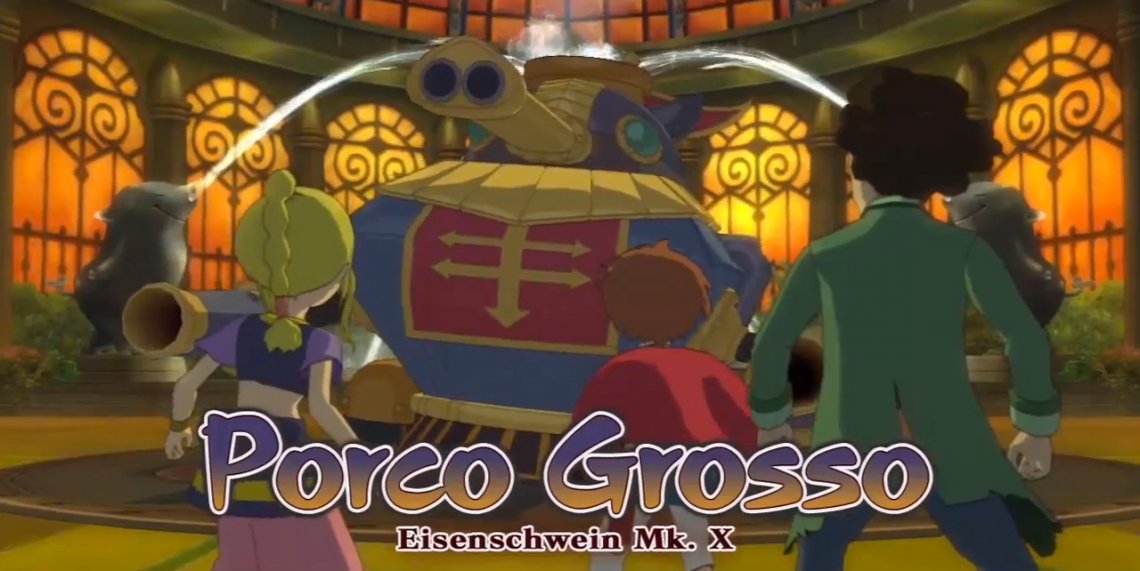 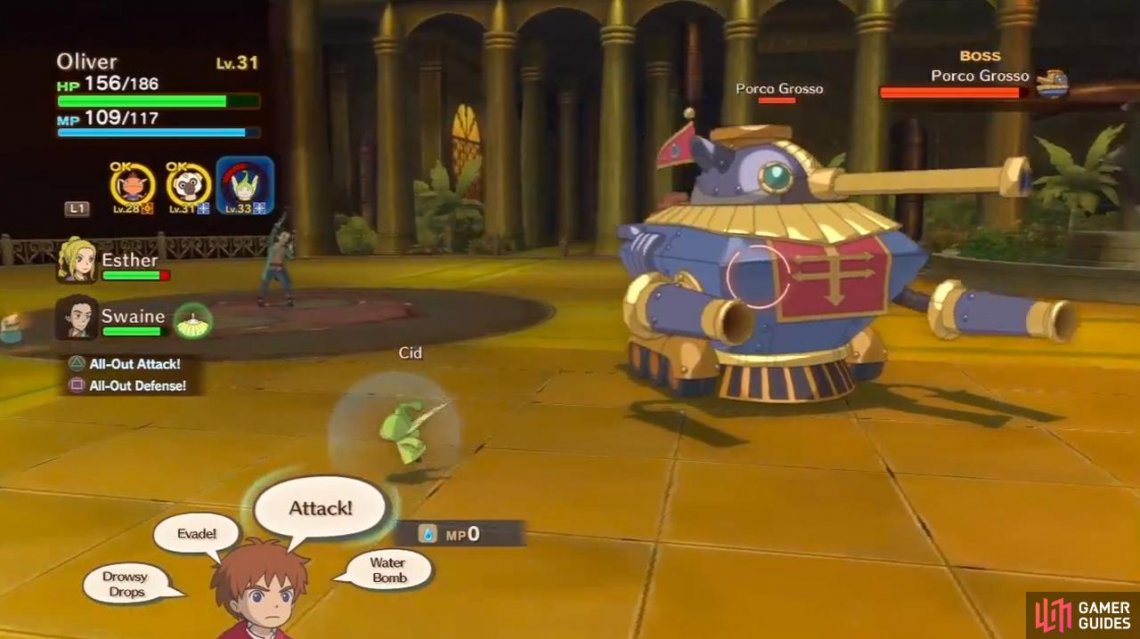 Porco Grosso is Hamelin’s toughest enemy and physical attacks are basically harmless against it, so you’ll mostly want to stick with magic and tricks. Mostly - because equipping Mite with the Roc Feather, and any spear-using familiars with a Lightning Bolt is a good idea, allowing them to do at least a little more damage with regular physical attacks.

Nonetheless, your Drongo will play an important role in this battle, as will any other familiars with storm-based tricks. Definitely perform an All-Out attack when the boss is weakened, and have Oliver grab the golden glim to perform his Burning Heart attack, which always deals decent damage.

Keep your health up by using Sandwiches and healing spells, and if things are going smooth, have Swaine steal the boss’s Tower Toppler, which you might’ve already bought from the Cawtermaster, but it’s a good and valuable piece of equipment nonetheless.

When the boss drops below 30% of its HP, it will start using a powerful attack called Gammon Cannon. This generally deals above 100 points of damage, so healing your party right before its HP drops to 30%, followed up with an All-Out defense plus Defend command is a wise move. If someone gets knocked out, do consider reviving them with a Phoenix Feather, heal them back up, then finish the battle with a few All-Out attacks.

Whenever you have control, just make your way to the stars for cutscenes. After a few of them, you’ll be magically transported to the Hamelin of the past. More scenes will play until you’re finally required to investigate a mine where the Emperor’s young princes have gone. Visit the Cat’s Cradle to heal up (if necessary), then go to the world map and check out the mine located in the mountains southeast of Hamelin.

You’ll find Gascin and Marcassin (the Emperor’s sons) under attack by a giant Earth Ogrrr. The beast is easily taken care of, so have Gascin ‘escort’ you back to the castle afterwards. You’ll be given the [ARROW OF LIGHT] spell, which deals light elemental damage and is particularly effective against undead/dark enemies.

With that spell and knowledge you have now, it’s time to leave Hamelin and depart for your next destination…once you’re ready, of course.