Watch the scene as you enter, then you’ll have to start your search for Rashad. First, check near the entrance on the other side of the area on your right; you should see a chest sitting near the “window” of sorts with [WHITE BREAD x3] . Further to the right, you’ll see a twinkling urn; examine it for another loaf of [WHITE BREAD] .

Go inside the Cat’s Cradle (the inn) while you’re on this side of town and check around inside. Just to the right of the purrprietor is another twinkling urn with a [SALTED ICE CREAM] , as well as a locked blue chest. Use ‘Spring Lock’ and grab the cup of [STRONG COFFEE] out of it. 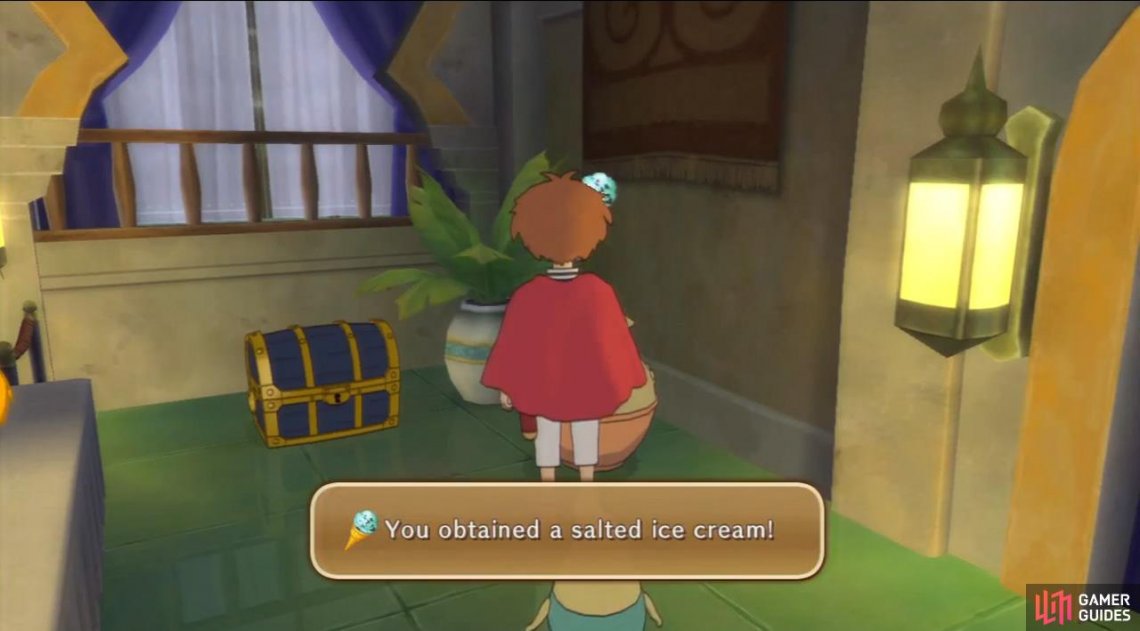 While you’re here, go ahead and spend the 20 G to rest up (and recover all of your HP and MP). You’ll receive another page for your Wizard’s companion: [THE SUMMERLANDS: SOUTH] ! Head back out into the town.

Head west to be back out in front of the Cawtermaster’s Store. There aren’t any treasures inside of the store, but there’s another twinkling urn just to the left of the entrance and down the stairs that has [10 - 20 G] inside! Head down the road here and visit the Hootique to your left. There’s a chest just to the right of the Hootenanny, so make sure to get the [SANDWICH] out of it before you head back outside.

Go right past your destination first to collect a few more treasures. Against the wall to the right of the your destination tucked away in the corner is another twinkling urn, so grab the [BLINDNESS-BE-GONE] out of it, then make your way north to a rather large town square. 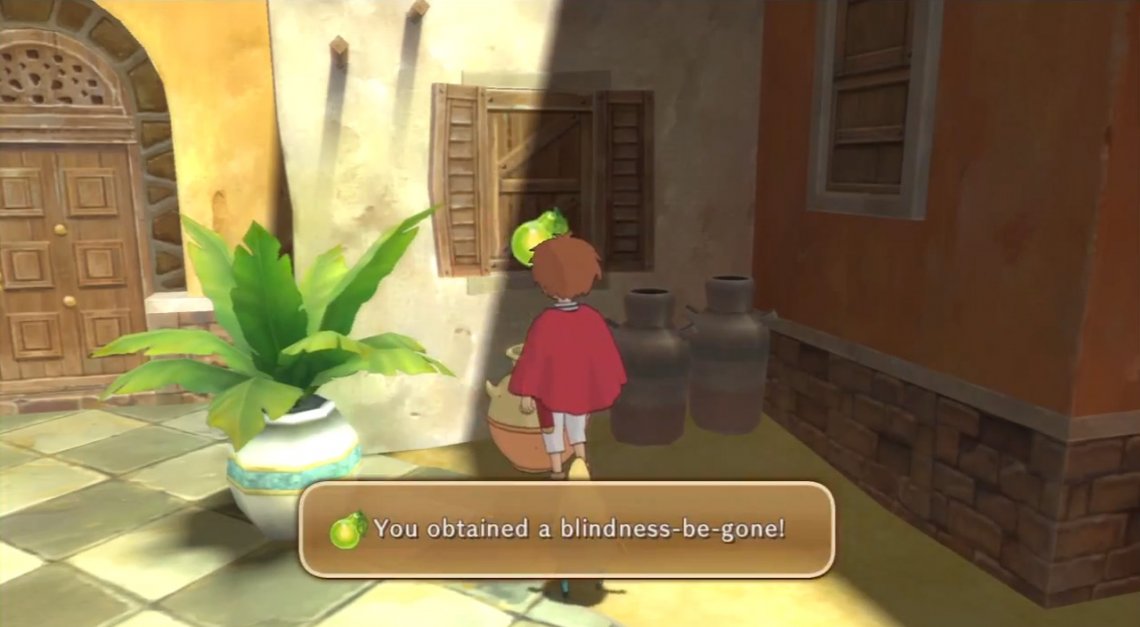 Take a moment to stand at the entrance to the big area and look around; you should see a chest very close to you to your west, an urn against the far western wall;, another urn to the north of the fountain on your left, and one last urn to the southeast of the fountain to your right (which you probably can’t actually see.) Start with the chest for [50 G] , then make your way clockwise from the western urn to get a [SOUR SUNDAE] , a loaf of [WHITE BREAD] , and a [POISON-BE-GONE] . 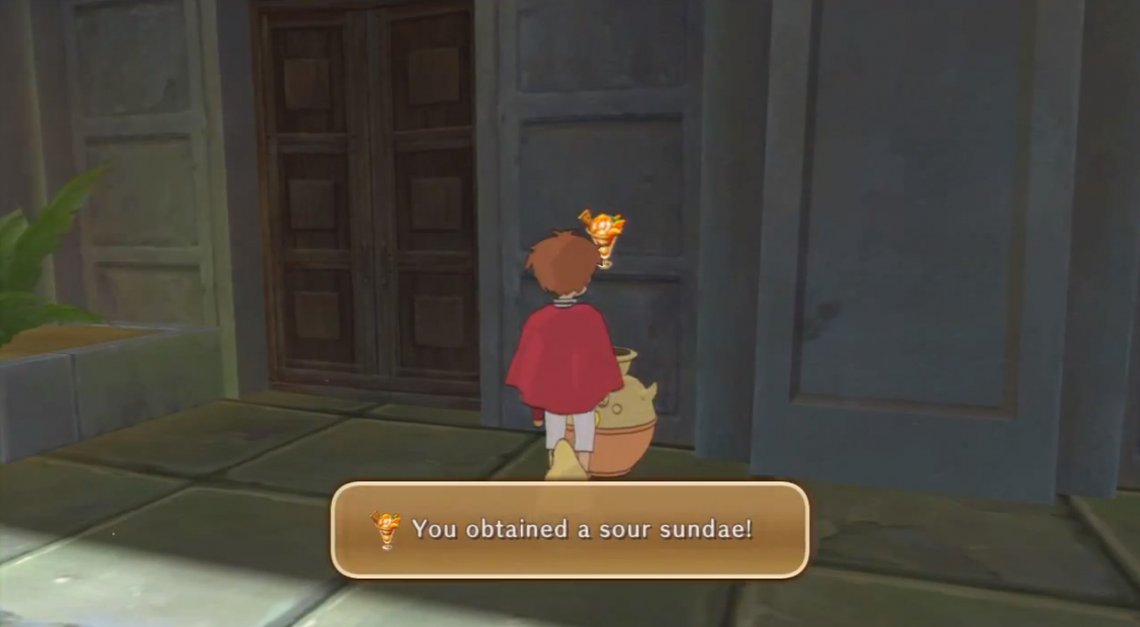 While you’re in this area, make a note that Horace the Sage is by the fountain to the right; use your ‘Spirit Medium’ spell to talk to him, and he’ll give you [THE FIRST TALE] of Wonder for your Wizard’s Companion. Go ahead and read it really quick by taking a look at it in your menu, then talk to Horace again to have him give you a riddle. He’ll ask you who the third smallest of the characters were; the answer is ‘DRAGON OF THE WEST’, so type that all out to receive the [DRAW POISON] spell from him.

There are some Errands and Bounties we can partake in, but for now, hold off on them and continue the story just a bit further. Go to your destination and talk to Rashaad to learn about his daughter. 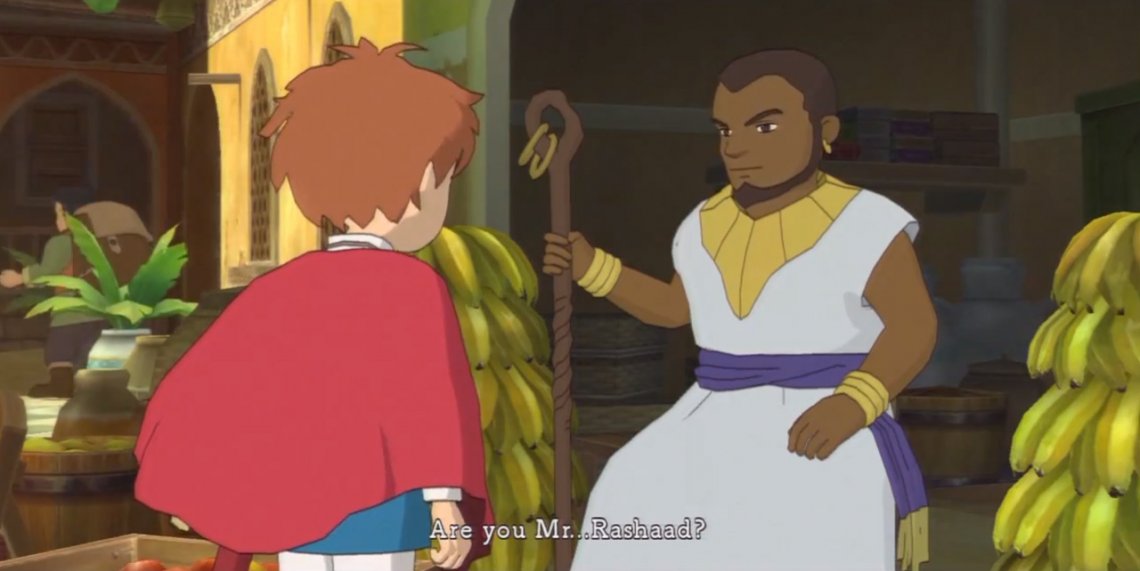 To proceed any further, you’ll need to return to Motorville and find her soul mate, so go ahead and cast ‘Gateway’ and head back to your world! 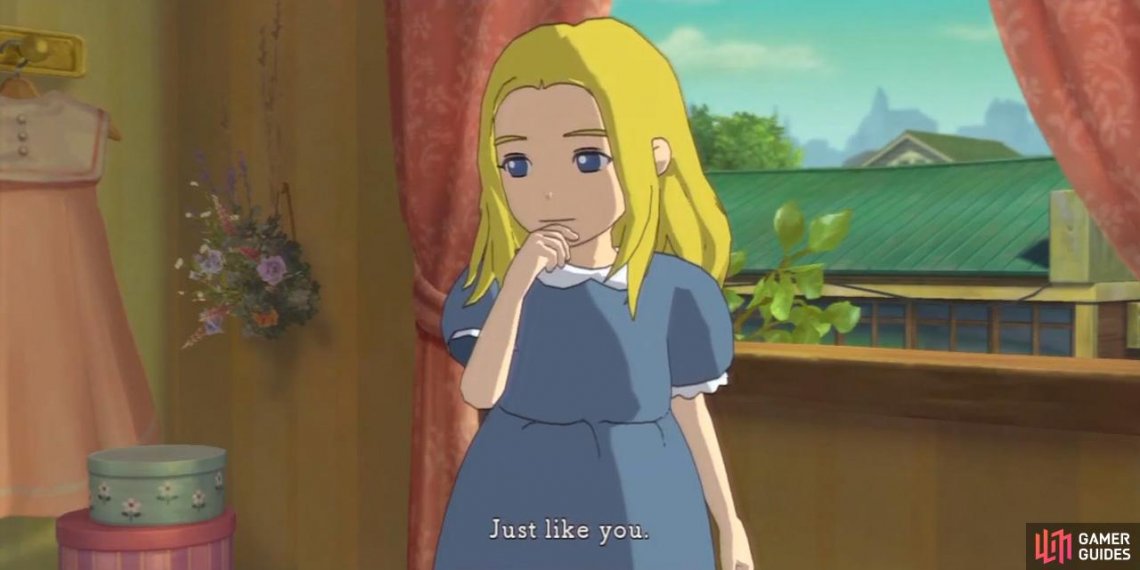 Head straight down to your destination to spot the girl, Myrtle, then make your way to her house for a scene. Use the ‘Spring Lock’ spell on her door as Drippy suggested… but it won’t make any difference. Start making your way west, and you’ll run into Pea once again, so run back to Myrtle’s house and talk to her. She says that you need to go inside, so check the door again, and it’ll be unlocked!

Watch the scenes inside, then make your way to Rusty’s shop to try to straighten things out. Heed Drippy’s warning before going in and make sure that your HP and MP levels are decent. Also save while you’re at it. When you’re ready, head inside. Rather than a calm meeting with Myrtle’s father, you’re treated to a full on assault from a Nightmare! 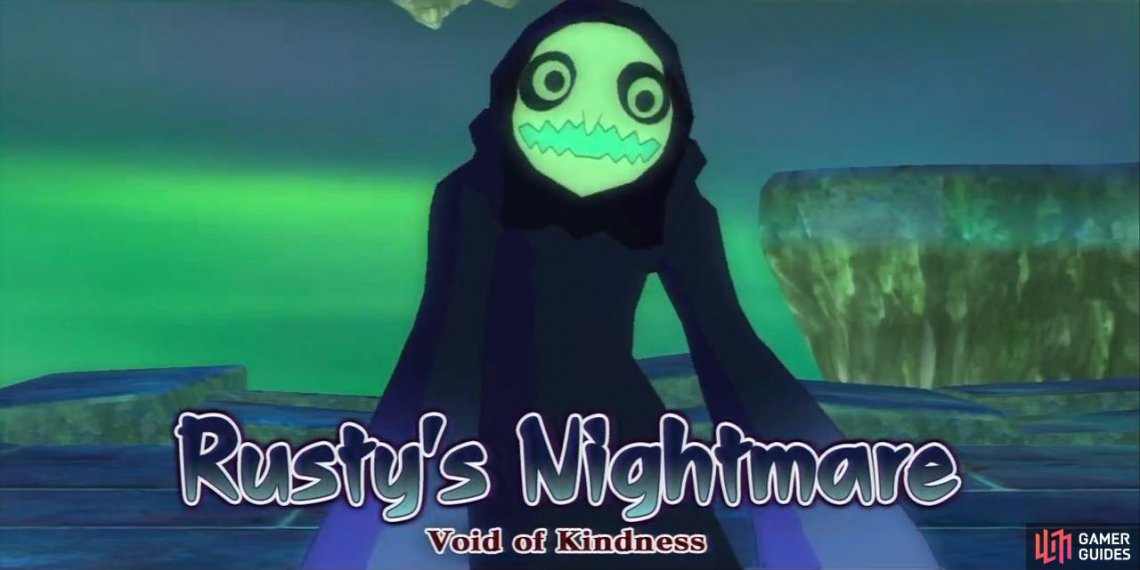 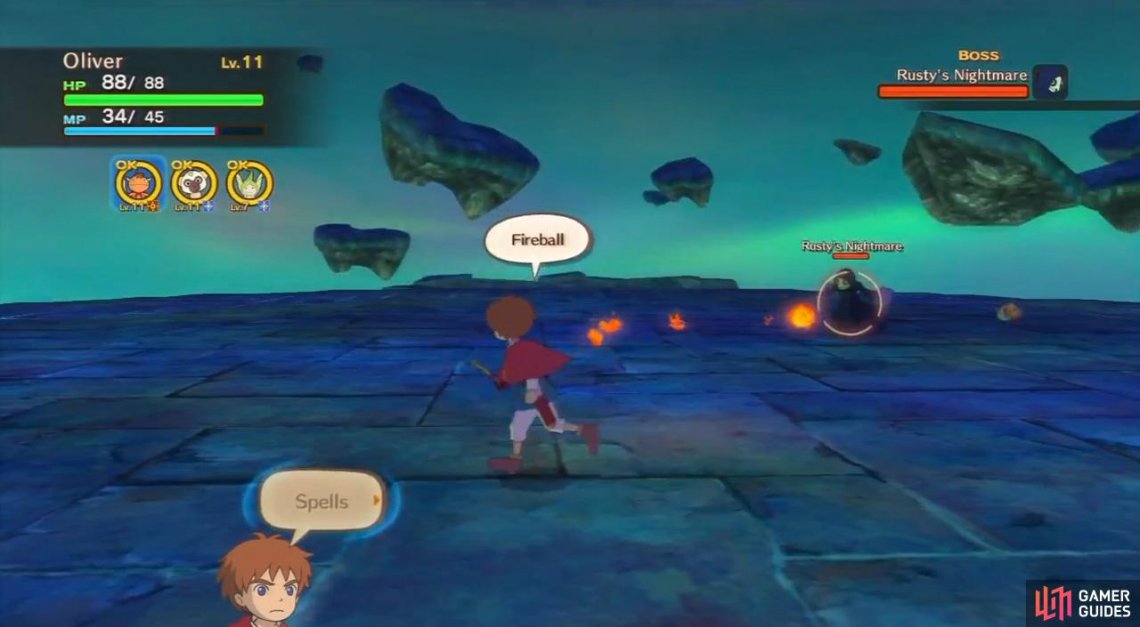 Don’t even bother using a familiar, as they practically don’t stand much of a chance. Control Oliver and spam your Frostbite attack, while collecting blue MP Glims as they appear on the battlefield.

Nightmare’s physical attacks may seem somewhat harmless, but it’s easy to get caught in a flurry of them that will quickly drain your HP, so stay away from him as much as possible. He’s slightly faster than you are, but it matters not, since his physical attack is initiated rather slowly.

Foul Fumes is easy to avoid as well, as long as you keep your distance; just make sure that you don’t step on the purple bubbles left over even after the spell is done, or you’ll still take damage and become poisoned. 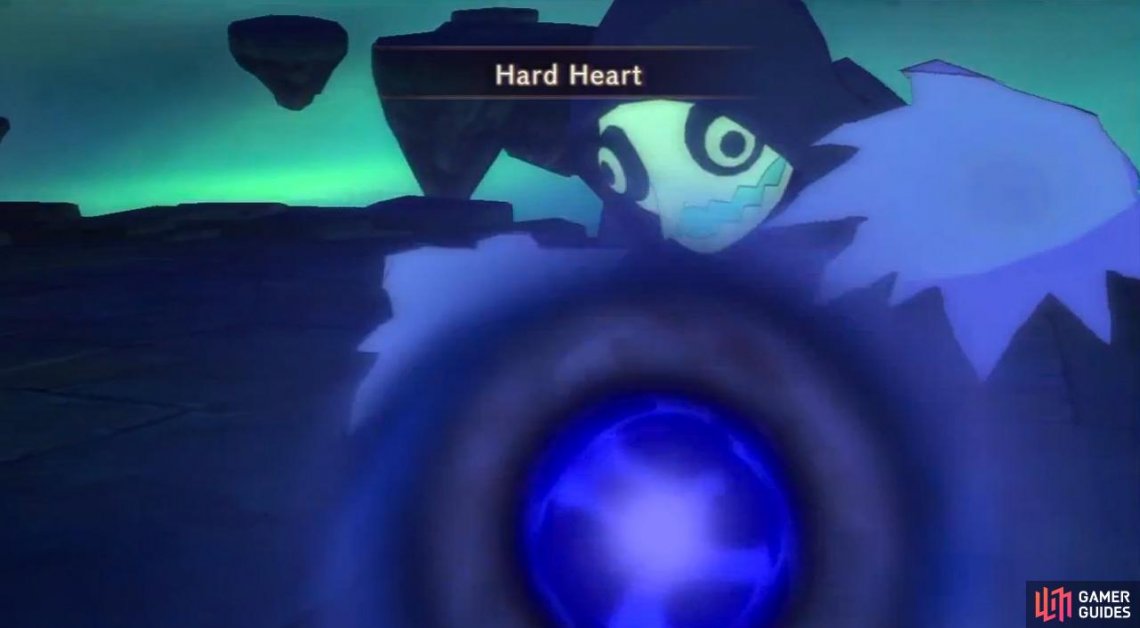 Hard Heart, on the other hand, does a decent amount of damage once it lands, and it will cause you to be Blinded, so be sure to quickly Defend once you see it coming. As long as you’re playing Oliver, being Blind won’t make a bit of difference, since you can still cast your spells with no problem.

Only when you run out of MP and with no blue Glims available, use an Iced Coffee, but only drink those precious cups sparingly.

After the battle you’ll learn a bit more about Nightmares before deciding to find a piece of heart to help; this time, we need some kindness. Luckily, it’s sitting right in front of you, so talk to his wife, then choose ‘Take Heart’, followed by talking to Rusty and choosing ‘Give Heart’ and kindness to restore him back to normal.

Head over to Myrtle’s house once again to give her the good news. Watch the heart-warming events inside the house, and you’ll eventually regain control back outside, ready to take some of Myrtle’s new-found courage! Use ‘Take Heart’ to get and store some courage in your Locket. After you have that, go ahead and cast ‘Gateway’ to return to Al Mamoon. 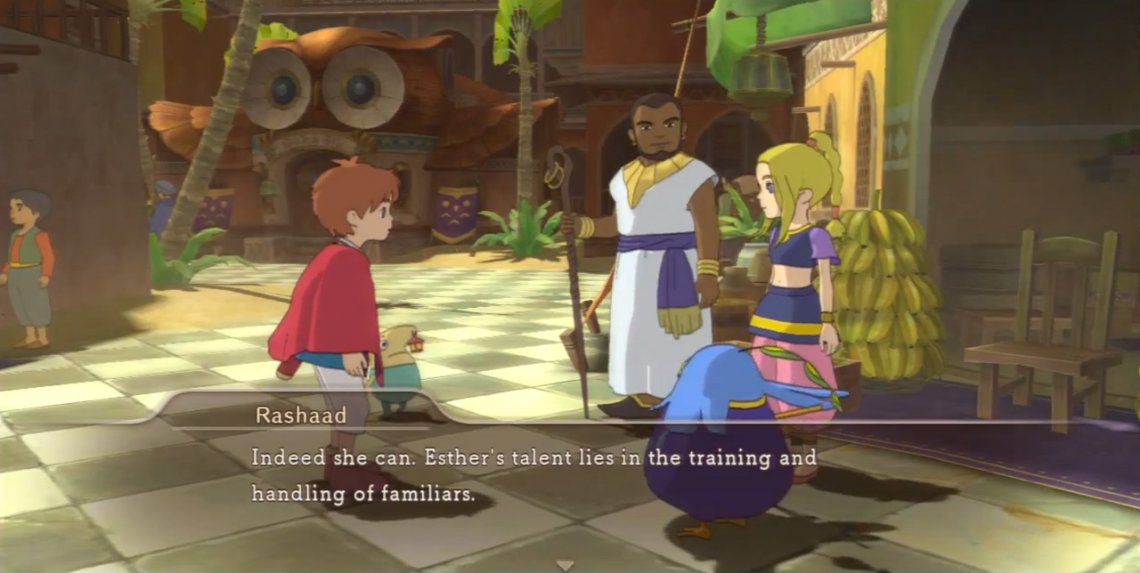 Make your way back to Rashaad’s stand and talk to his daughter, choosing ‘Give Heart’ (courage) to return her back to normal as well! Some more scenes will play, telling you about the Clarion among other things, and both Rashaad and his daughter, Esther, will decide to help you in your fight. What makes it even better is that Esther wants to help directly, and she will join your party as your second full-time party member! Along with her will also come her very own familiar, a Drongo! You’ll also get [ESTHER’S CLOTHES] by default.

Of course, Rashaad will fulfill the need of what you originally came to him for: spells. He’ll give you the [PUPPET STRING], [SECRET INGREDIENT], [MAGIC LAMP] , and [PULSE] spell pages for your Magician’s Companion! Sweet!