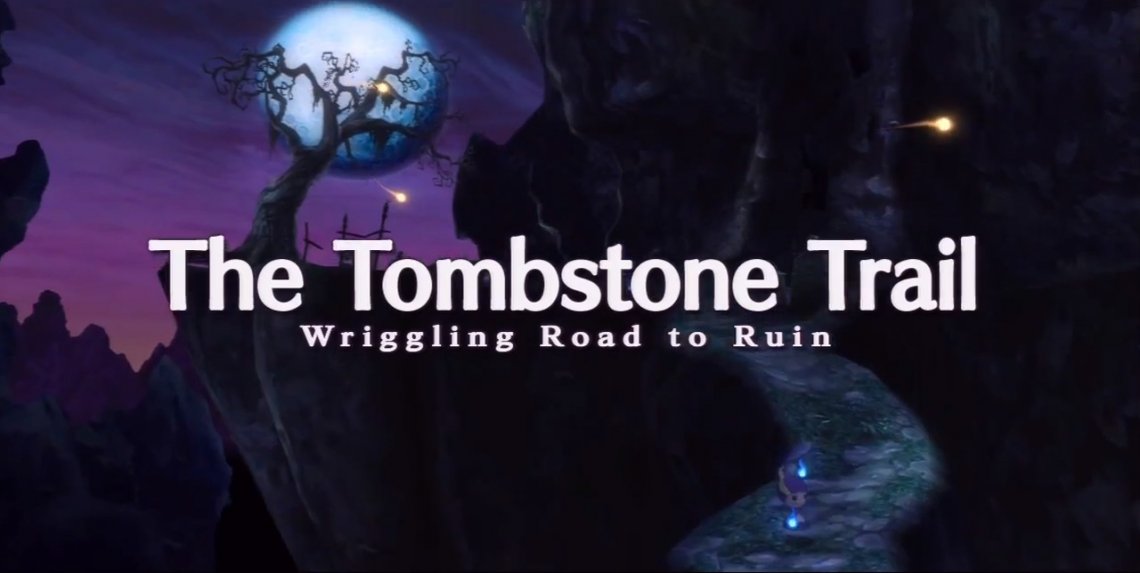 Travel through the Ghostly Gorge to the northwest of Hamelin and use your Bridge spell to close the gap that was previously blocked by a Hamelin Boar, who must’ve gotten bored by standing there all day. 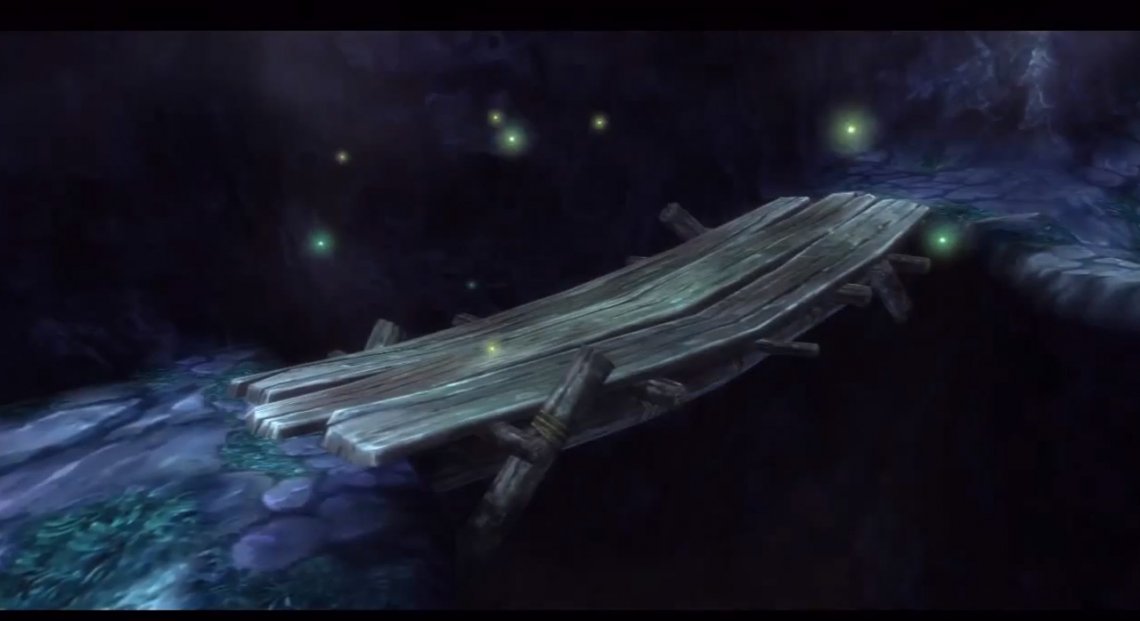 Be sure to collect the hidden treasure at the graves in the far northeast corner to find a [MIRRORED ARMOR] . The Tombstone Trail can be entered on the far north side by traveling underneath the bridge you just crafted.

As you enter you’ll receive the [ROGUE’S REVOLVER FORMULA (128)] , so be sure to craft one for Swaine if you have the ingredients. It’s important to know that there are Curse Traps lying around this area; dark spots that inflict the curse status ailment on Oliver and his friends, which slows them down significantly both in the field and in battles. It only lasts several seconds, but enemies can easily catch up with you during this time. It’s best to altogether avoid the dark cursed spots by casting the Levitate spell to float over them.

Take the right path (the left branch leads to a dead end with a Curse Trap) - ignoring the double doors for now - until you reach a broken bridge. Cast Bridge, right? Nope! Ah.. Levitate right over it then, huh!? Nope! Only the Rejuvenate spell allows you to continue. In any case, collect a handy [CURSE-BE- GONE] from the chest to the right of the bridge and continue climbing the trail. 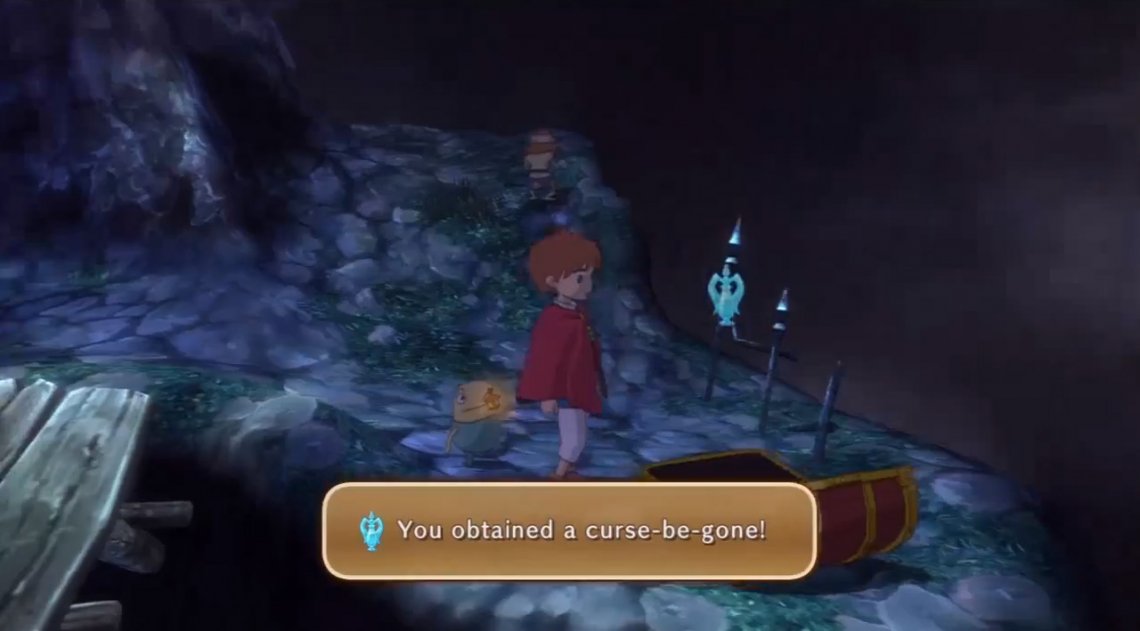 At the intersection, head over the wooden plank to collect a [CHEESEBURGER] from the chest at the far end (but be sure to avoid or levitate over the Curse Trap near the graves). 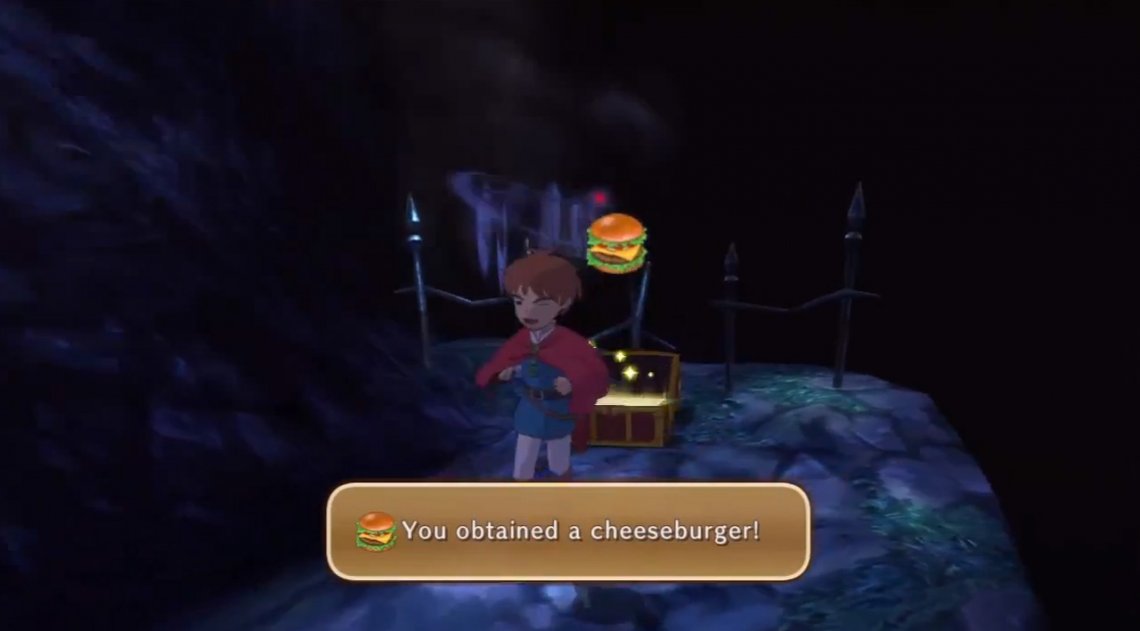 Mr. Skeleton at the end of the other path isn’t about to let you though so give him a whoop… Actually, cast the Rotten Apple spell when Oliver has the ‘?’ mark above his head and you’ll fake your way through. You’ll also receive the [SKELETON KEY] which will soon grant you access to the Crypt Casino. 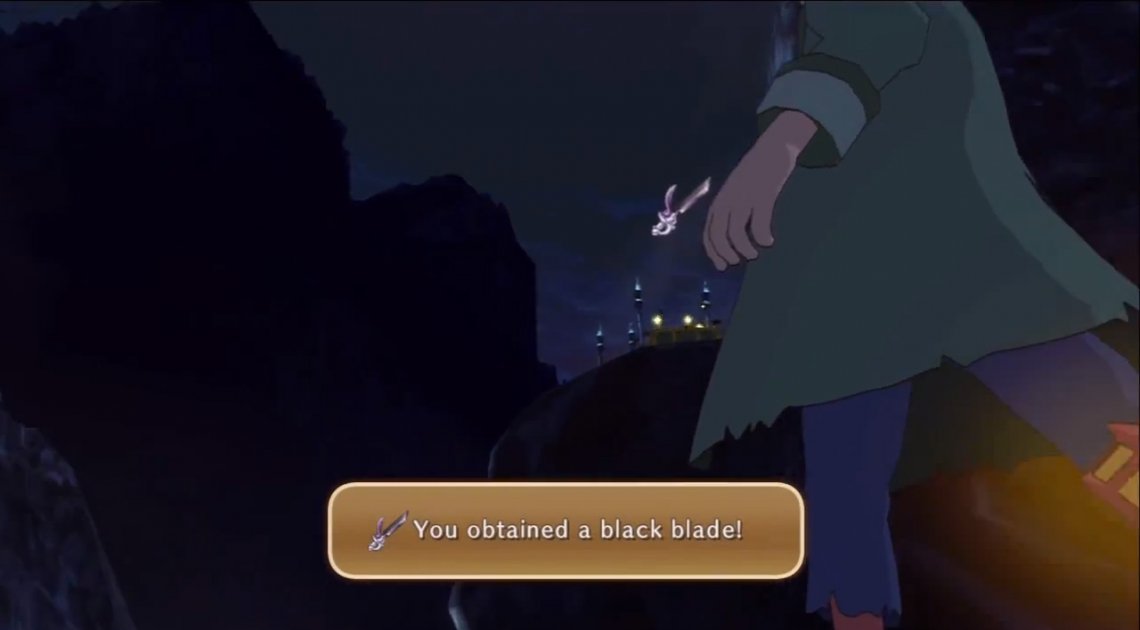 You’ll be at a three-way intersection; the left path contains a green chest with a [BLACK BLADE]. The right path leads to a dead and with a Curse Trap, so take the middle path leading west to proceed. You’ll reach a shack with a nearby Waystone; after the scene you can collect a [CURSE-BE-GONE] from the pot hidden behind the shack. Take note of the broken robot and continue onwards. 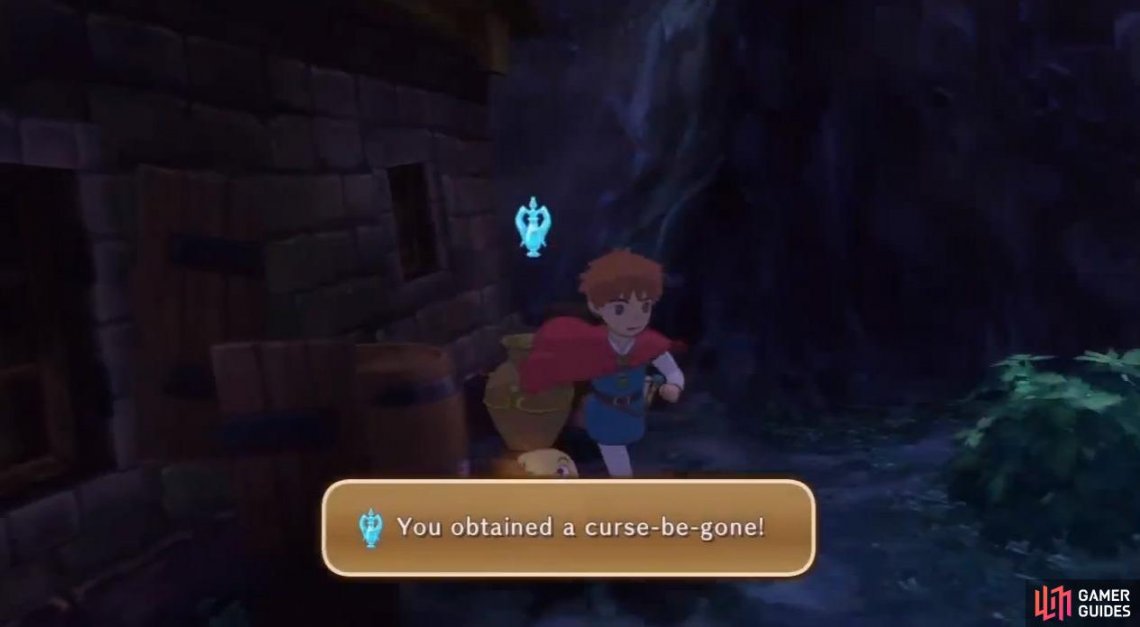 The path will get rather dark at some point, so cast the Magic Lamp spell to light the way for you, and be sure to cast this spell whenever you see candles along the path to provide you with a more permanent light. In fact, this it is a requirement to lit all seven unlit candles in this area before you can continue. 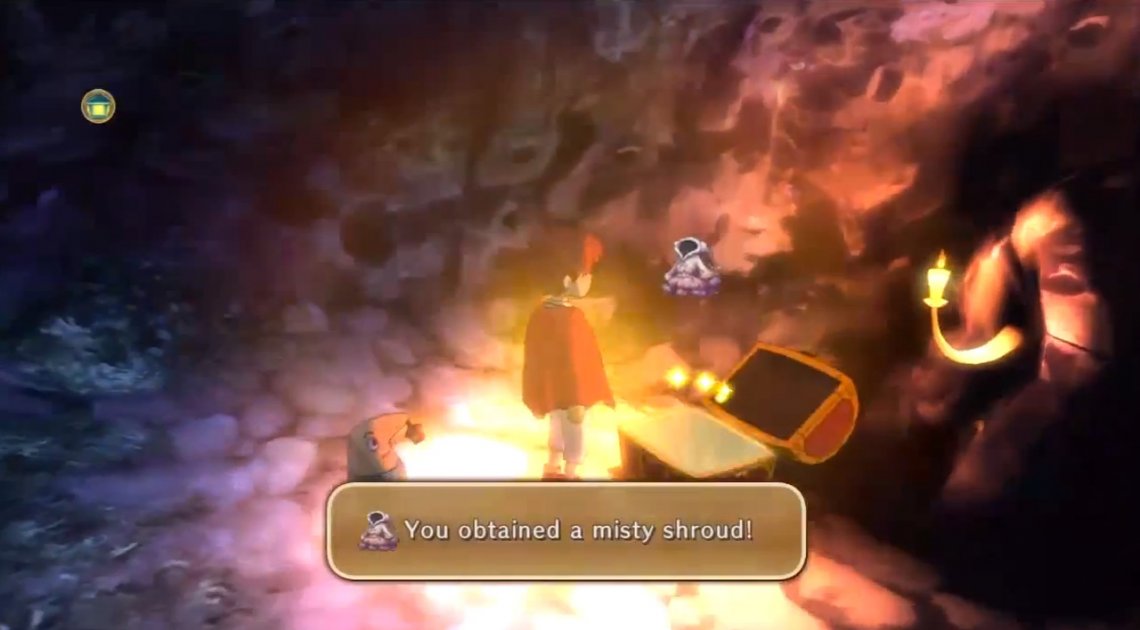 The path splits here; the one to the northwest has a chest at its end that contains a [MISTY SHROUD] and an unlit candle, while the other dead end to the far west has just an unlit candle. Head back to the intersection, cast the Levitate spell and take the right trail, which will once again split up. Before you reach the intersection, be sure to lit the three unlit candles along the way, the last one being in an alcove to the east.

There’s a chest with an [AVENGER’S BADGE] at the end of the northwest trail, as well as the final unlit candle, clearing the rock wall to the east. Recast Levitate (if necessary) and search behind the tree in the northeast corner to find a blue chest with a [DEVIL’S FANG]. Heal up at the Waystone up ahead and save your game before diving into the next boss fight. 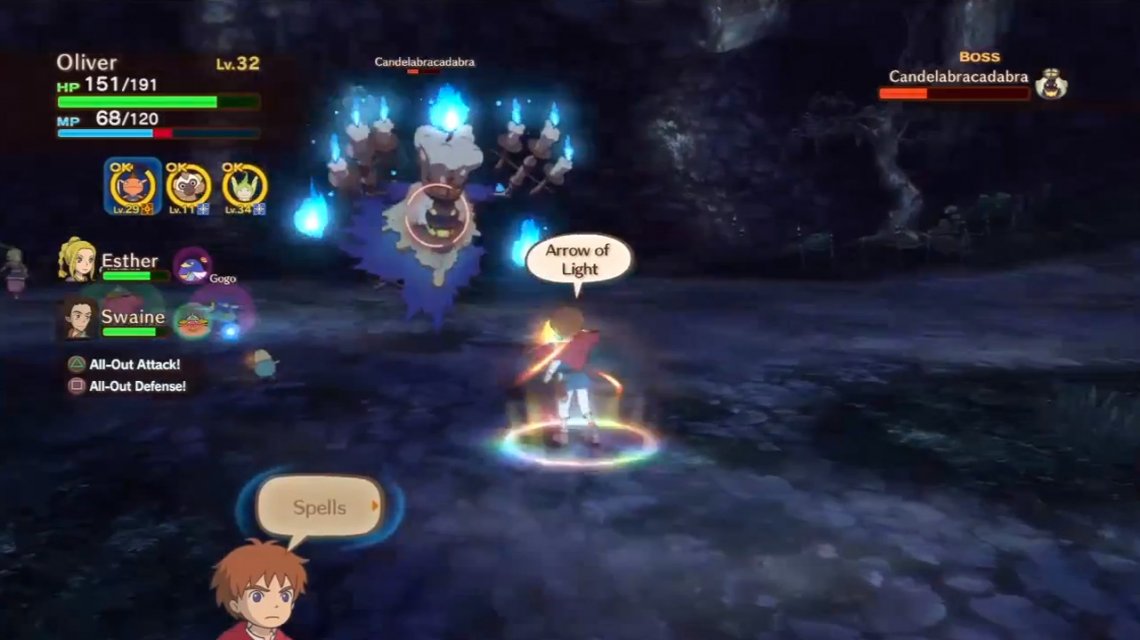 Candelabracadabra is a surprisingly easy boss to beat, but that’s mostly thanks to your newly acquired Arrow of Light spell, which tends to generate various glims - including golden ones - so be sure to cast the spell a lot by using Oliver.

Its physical attacks are swift and the other attacks can inflict Curse and Blindness on you and your familiars, although it shouldn’t make too much of a difference. What you’ll really want to look out for is its Wacko Lantern attack, which hits all party members for a decent amount of damage. Be sure to quickly perform an All-Out Defense when you see Candel cast this.

If you have the battle under control, definitely steal the Noble Attire from it, an excellent cloak for one of your familiars.

Afterward you’ll finally be able to claim the [MORNSTAR] as your own, and a clue is given to you as to how you managed to travel back in time. Return to Hamelin by using the nearby teleport. As you travel back, a scene plays, and even more scenes will play when you reach the Emperor.

After all this, collect a piece of belief from young Marcassin and cast the [BREACH TIME] spell you’ve gotten just now. In the present, cure Marcassin and he’ll grant you the [WARD], [FUSE], [INSIGHT] and [TRAVEL] spells, the latter being extremely handy as it allows you to teleport to any places you’ve already visited. 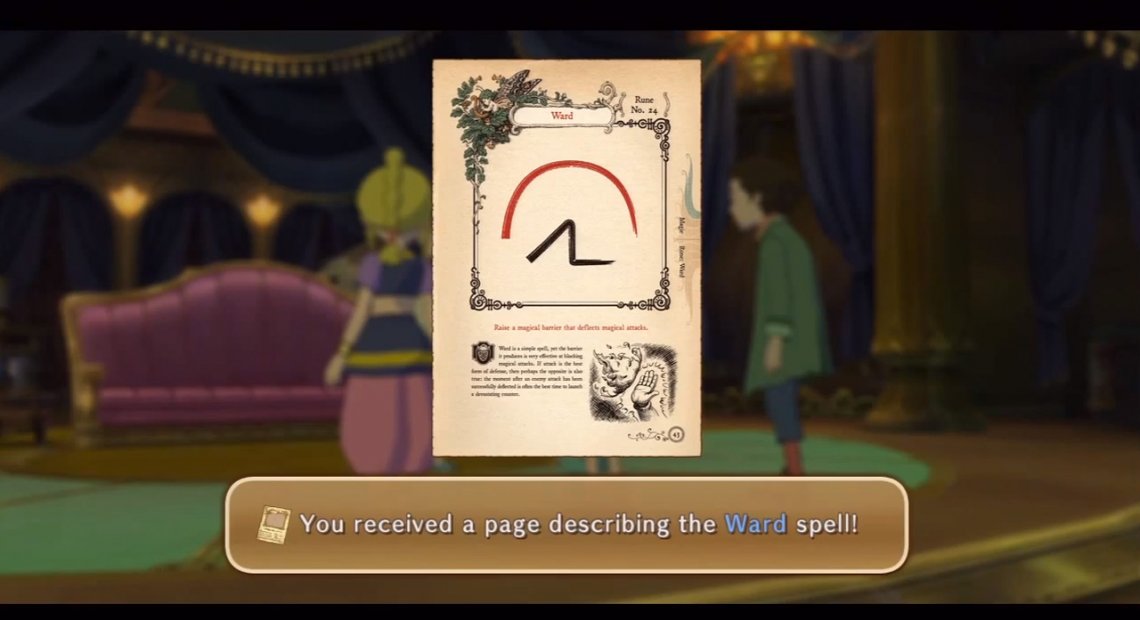 Make sure to actually equip Mornstar, if you haven’t already. It gives you a nice magic boost!