Remember Shipwreck Shore, southeast of the Shimmering Sands, but north of the Crusoe Islands? The Vault of Tears is located here; it’s the area you previously couldn’t access. Turns out that it was for the better…

There’s a Waypoint and magic circle at the start of the area (as well as a Familiar Retreat). Head down the stairs until a short scene plays and the party is turned into frogs. Your familiars can thankfully still be used in battle, as can provisions.

Since the water stream is too strong on the left side, proceed east and follow the rainbow colored frog downstairs. Don’t bother trying to open chests, since frogs obviously can’t open them. Turn left twice (heading into the northern room) and wade through the water to reach a room west of the flooded chamber. Looks like the rainbow frog is headed south, so follow it upstairs and step inside the magic circle to turn back to normal again. The nearby chest contains an [ESPRESSO] .

Now head north to find the rainbow frog; use ‘Nature’s Tongue’ to speak with it, then proceed north to find Prince Ali in a cell. Use the ‘Spring Lock’ spell to free him, and make note of the Waystone here. After all the scenes, head back to the magic circle, and after that, to the northern room with the gate. The prince only has a partial clue; the full clue can be found in his cell. Go back to the room with the tiles and stand in the middle. Then cast the ‘Puppet String’ spell. Now, swap the two statues so that each one is standing exactly where the other was standing. Don’t push them all the way to the back or they won’t align correctly. If done successfully, the water in the flooded room is lowered.

Heading south first, you can curve around the western hallway to return to the first walkway where you were turned to stone. From here, head east to the room just south of the formerly flooded area to collect some treasures.

Whatever you do, DO NOT walk in front of the statue from the start of the area again. Otherwise, you’ll be back to frogs and have to trek all the way back around to the magic circle to undo it.

There’s a blue chest underneath some vines in the lower right/southeast corner of the room that contains a [PIE ON THE BONE] . 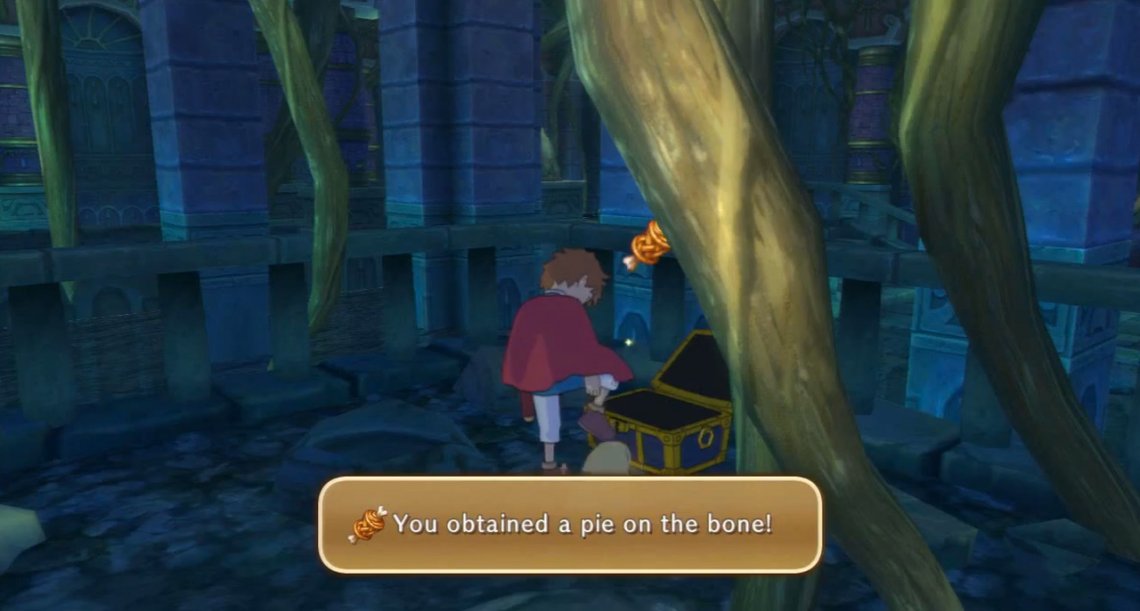 If you want to collect the treasure to the south, cast Levitate first - there are Nix Traps on either side of the walkway that you’ll want to avoid. The chest contains a [VIAL OF SAGE’S SECRET] . 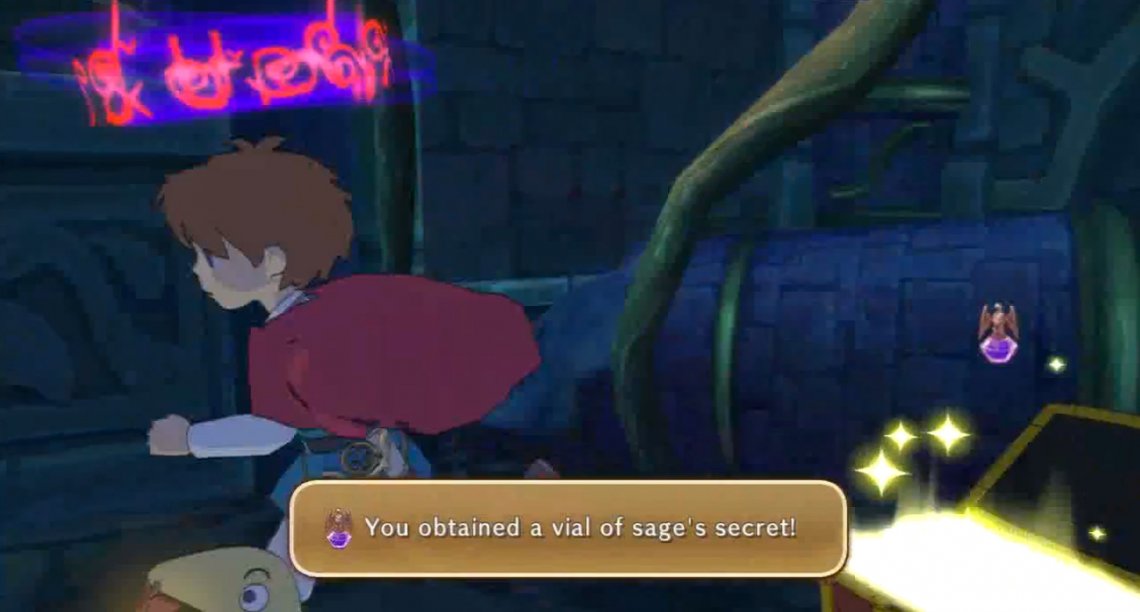 Head inside the previously flooded room to the north of the area and look for a green chest behind the bars to the north; it contains [STORM SERPENT SCALES] . The star on your map indicates the [SERPENT KEY] , which is located in a blue chest blocked by a Nix Trap, so use Levitate to get past it, followed by using Spring Lock. 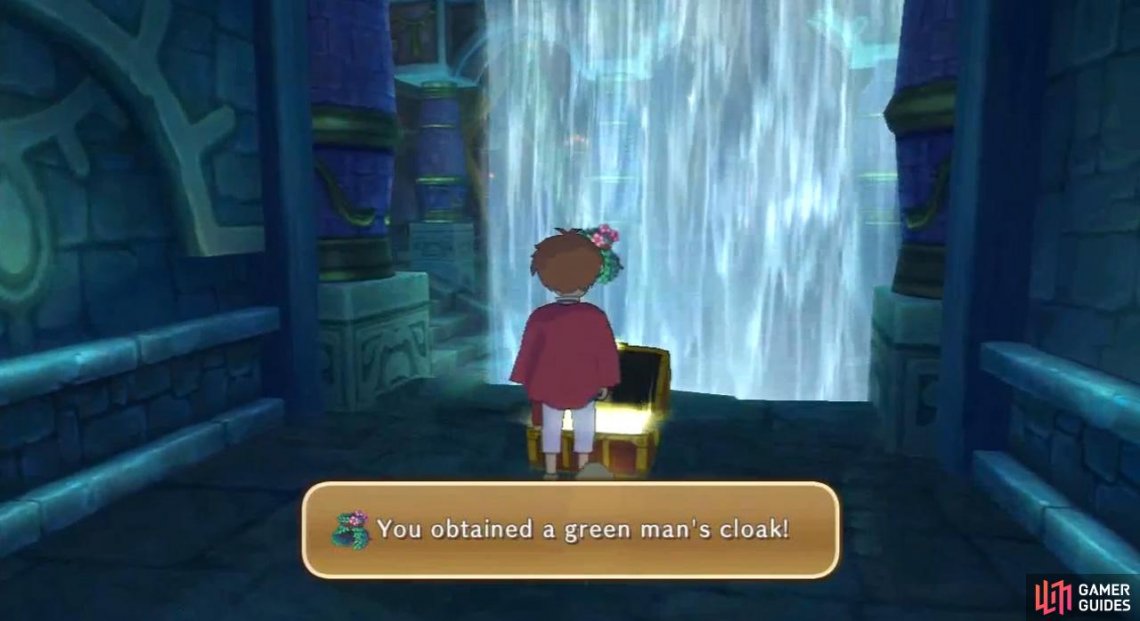 There’s only one treasure left to get. Use the pillars as stepping stones (they are on the east side of the room, upstairs) and cast Levitate (if it has worn off) to get past the Nix Trap. The end of this walkway contains a chest with a [GREEN MAN’S CLOAK] .

Having done all this, return to Prince Ali. It’s best to save your game at the nearby Waystone, since by the rules of the JRPG, we sense a boss battle approaching! Equipping your familiars with storm-resisting armor and cloaks is a wise move, and fire dealing weapons and familiars with fire tricks are good to deploy in the upcoming battle.

When you’re ready, use the key on the door on the left side of the room, then enter the Chamber of Secrets to take on Lord Voldemort’s Basilisk! (Er, wait, wrong magical universe.)

Aapep has some decent tricks up his sleeve, but if you’ve come prepared you should have fair defenses. The Death Rattle and Black Bolt attacks both inflict status ailments, curse and confusion respectively. Definitely try to avoid or defend against Black Bolt. If Curse really annoys you, use a few Curse-Be-Gones or otherwise bear with the status. Since Aapep is weak against fire and light, you could use spells like Arrow of Light to your advantage, although it’s not absolutely necessary. When Drippy tells gives you his ever-wise advise, cast the Burden spell with Oliver (several times, until it sticks), and perform an All-Out attack afterwards. If Burden generates golden glims, quickly grab them (with Oliver or familiars with a fire Miracle Move).

Serpent Strike is a powerful attack, so try to avoid it or defend against it; the storm-resisting equipment will also come in handy here. If you’re confident enough, try to cancel some of Aapep’s attacks by continuously going All-Out on him.

Various scenes play after the battle, and you’re of course rewarded with the long sought [MOON STONE] . A new page in your Wizard’s Companion is also yours: [THE FOURTH TALE] of Wonder! 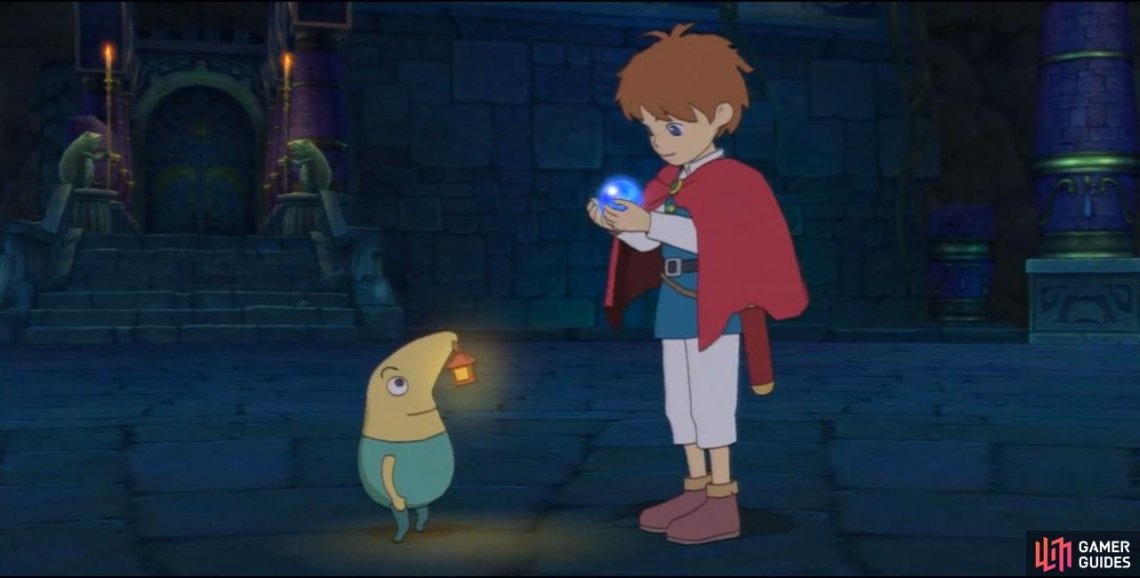 With that in hand, you’ll regain control outside of Al Mamoon. Rest up at the Cat’s Cradle there, head back out and get ready to find the next stone!