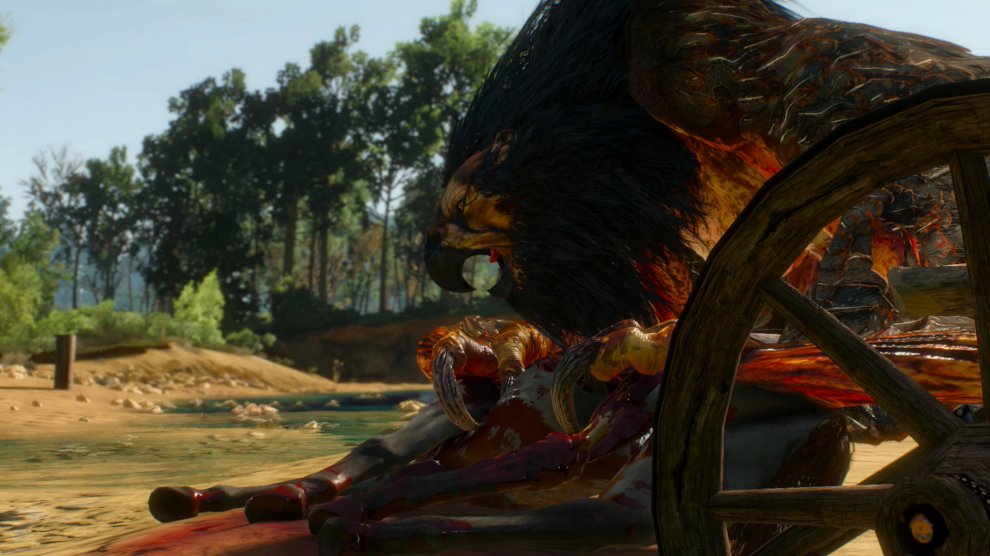 In the Armys Wake

Geralt will wake up, and the old Witcher, Vesemir, will start chatting with him. Either reveal the details of your dream-tutorial, or not. Afterwards the two will decide to head out. According to a letter Geralt received from Yennefer, their destination was Wiloughby, a rendezvous somewhat complicated by the fact that the town was slightly pillaged. War rages in the northern lands, and where armies pass, Necrophages follow.

This fact is punctuated by the Ghouls that will show up and attack you here. They're not challenging foes; dispatch them by using Fast Attacks with the Silver Sword, then loot them for any Venom Extract and Ghoul's Blood they might drop. If you get injured, you can meditate by touching the [Touch Pad] and heading to the "Meditation" screen. At this point in the game, you've got more time than disposable healing items on your hands.

Note: Geralt naturally regenerates one point of Vitality per second. Sadly, since he starts the game with 3500 Vitality, this amounts to... well, frankly, piss-poor regeneration. It will take nearly an hour to regenerate from near-death to full health.

Note: Crafting and Alchemical components are weightless in patched versions of the game, which will make gathering resources much less annoying. Pick plants to your heart's desire!

Note: In Death March mode Geralt will not heal when he meditates. You'll have to use food, stand around, or select talents (like Quen) which can restore health. You can find plenty of Raw Meat by hunting wild game such are Hares and Deer. They can't fight back and take only a single Igni shot to kill.

When you're done picking on Ghouls, return to Roach and from him head north-west, just past a small trail, where, with your Witcher Senses active, you should spot a Crystal Skull lying on the ground. Geralt will guess this odd object belongs to Yennefer. Might come in handy.

Note: Using Witcher Sense will cause interactable (usually lootable) objects to glow yellow. Quest-related interactable objects will glow red. Monsters will be shown as white ripples (of varying size, depending upon proximity). Objects that can be affected by specific Signs will have that Sign's symbol over them - typically objects that can be destroyed with Aard or ignited with Igni.

That's enough goofing around for now. Time to head over to Roach, mount up, and follow Vesemir. Don't worry, we'll return to explore this area in more detail shortly. Summon Roach by double-tapping [L3]. While riding, hold down [X] to canter, double-tap and hold [X] to gallop, press [Circle] to jump, and hold [Circle] to dismount. [Square] and [Triangle] attack from horseback, but it's not an ideal way to fight.

There are two larger dirt roads that eventually connect to the south; you want to follow the eastern of the two. Vesemir will comment on the state of the war as you ride, showing a decidedly un-Witchery view of politics (which Geralt doesn't fail to comment on.) When the road turns from heading south-east to south you'll spot a gallows east of the road with three swinging corpses in various states of decay. Follow the road south-west to find a "Ransacked Village". War hits the poor the hardest, and so it is here. Leave the people in peace for now and continue to follow Vesemir south, then south-east, eventually crossing over a small bridge.

Note: Signposts serve as fast-travel waypoints. To use one, simply approach it and hit the [X] button, then select any other discovered signpost to travel there.

The Griffin and the Tavern

Some time later, Geralt and Vesemir will run across a merchant being harassed by a Griffin. The Witchers will succeed at chasing the beast off (although, not in depriving it of its meal) and Vesemir will be superficially wounded in the process. Afterwards, the maligned merchant will emerge from under his cart and offer to pay you for your good deed. If you demand payment, you'll find yourself 50 Crowns richer. Afterwards, the merchant will overhear you talking, and refer you to the tavern in the village of White Orchard.

If you bother checking out your map you'll note that you've traveled north-west from where you were before the cutscene, and you should continue west along the road from the "Ford" marked on your map. Vesemir and Geralt will discuss the Griffin's odd hunting habits... because Witchers will gladly attribute any odd monster behavior to human activity. Keep riding east, cross "Woesong Bridge" to reach the village of White Orchard, then keep following Vesemir to the tavern and he and Geralt will dismount and head inside.

Witness some tension in the tavern, after which Geralt and Vesemir will talk to the innkeeper. If you didn't shakedown her cousin earlier, she'll be thankful and give you four Roasted Chicken Legs. Keep talking to her to learn that there's no contract for the Griffin yet. The Witchers might speculate on why the Griffin has chosen abnormal hunting habits, but the reason why there's no bounty can fully be blamed on the war. Other than that, she sells some food and alcohol, and hasn't seen Yennefer... although somebody else in the tavern may have.

Note: Merchants have a fixed amount of money on them at any given time. Fortunately, the entire economy of the world isn't dependent upon your actions; if you meditate for a while, eventually the Merchants will replenish their money, and some of their wares. Also worth noting, different merchants will give you different prices for different wares, typically buying objects they themselves sell for more than other merchants would. Simply put, sell weapons and armor to smiths, sell herbs and monster bits to Herbalists, etc. Lastly, some merchants won't buy certain things at all. Simply put, it can be lucrative to shop around.

Note: Patched versions of the game now have stashes spread throughout various taverns in the world, all connected by magical portals of innkeeper sorcery. Convenient stuff. Kinda seems like it should have been a no-brainer for the initial versions of the game...

Start out by talking to a pair of Peasants sitting north of where Vesemir roosts. They're a pair of jack-asses, but if you use the Axii Sign on one of them, you'll get the information you seek; Yennefer passed through here a few days ago. In quite a hurry.

The Axii sign is a wonderful, multi-purpose sign that almost everybody should seriously consider investing in. Not only does it make its use in dialogue more likely to succeed (who doesn't like more quest/dialogue options and easy XP?) but some monsters can have their behaviors radically altered by it. Also, when used on human enemies - like Bandits - it can stun them and leave them vulnerable to a coup'de'grace. Quickly thinning the herd is a good thing in Death March difficulty. Investing three ranks into the "Delusion" talent comes highly recommended.

Of course, it's not the most reliable bit of information, so you might as well keep asking. Ignore the threesome playing cards east of the Innkeeper and instead talk to Gaunter O'Dimm further east. As far as tavern patrons go, he's a rather swell chap, if a bit wearing on the patience. Play as nice as the dialogue options will allow and you'll score some Nilfgaardian Lemon for free, as well as the information you seek. He not only knows Yennefer by her description, but he knows you, as well. Seems Dandelion's tales travel far. The Peasants from before were right, but lacked sufficient information. The local Nilfgaardians might know more.

A Game of Gwent

What's Gwent? It's a card game in The Witcher 3, and fortunately for Geralt, his deck massively over-powers his opponents... at least, for now. You have four decks of cards you can play, but most of them - save the Northern Realms deck - are currently lacking cards. Most cards have a Strength score, which is added to your total Strength when played. The player who has the most Strength at the end of the match wins. Simple enough.

Cards are further divided by type: Close Combat, Ranged Combat, Siege Combat, Weather Cards, Special Cards, and Leader Cards. Leader Cards don't directly contribute to your Strength, but rather they typically allow you to perform one special action (add or remove a Weather effect) or add a passive bonus. Weather Cards set the Strength of all units cards of a specific type (Close Combat, Ranged, Siege, etc.) down to one for all players. This being the case, it's wise to build your deck with two things in mind-at least, at first: pick the strongest cards you have, and diversify your unit types so you can't be completely crippled by any one Weather Card. Having a Clear Weather Card also helps.

With that in mind, play your first match of Gwent with the Scholar, and with any luck you should win. He's not too bright, despite his name. If you play powerful, diverse unit cards, he's really got no chance. Just don't play all your cards in one round - you rarely get to draw new cards. If you build up a comfortable lead (five Strength or more higher) you might just want to pass. This will end the game for you, and there's a chance he'll spend himself to victory, but if he does this on the first round, there's a good chance he just won't have any cards left to compete with on the next two rounds.

When you win (best two out of three rounds takes the game) you'll get the "Zoltan Chivay" Card, a Close Combat Card that has no alliance - it can be played in any deck. Sweet. You can also buy more Gwent cards from the Innkeeper; she sells five, including another Foltest Leader Card, three high-Strength cards with the "Tight Bond" special ability (cards that amplify duplicate cards when played together) and a "Decoy" card. In any event, the Scholar will mention a certain "Stjepen" you should look up later in your travels. All this starts the quest "Collect 'Em All" . Seriously, be sure to buy these cards as soon as you can, you might not be able to later, and missing out on the "Decoy" , "Catapult" , "Blue Stripes Commando" and "Crinfrid Reavers Dragon Hunter" cards would be a shame.

Note: The Innkeeper here will sell a total of three "Decoy" cards, just be sure to check back with her at regular intervals.

Note: In patched versions of the game you'll get the book "A Miraculous Guide to Gwent" , which details how many Gwent cards remain uncollected and where, broadly, they can be found. Cards in a specific area (Velen, Novigrad, etc) must be bought or won from specific players during quests. "Number of new cards which can still be won from players or no particular renown or skill" are the cards you'll randomly win for defeating non-quest-related Gwent players throughout the game.