This place is a bit of a maze, but at least you know when encounters are happening as they only begin when you move into a shadow. Below you’ll find a not-to-scale map of the area. You begin at the ‘E’. Follow it along to get the two items, then head to the ‘X’ to reach the next area, which is like a normal area in terms of movement. 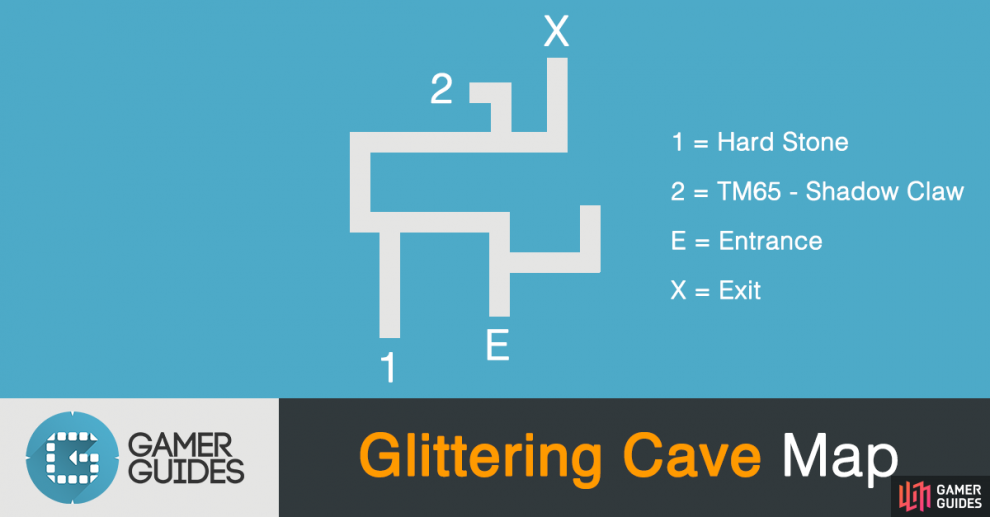 Once you reach the next area, you’ll have your first encounter with Team Flare. Aww crap!

If you see a Team Flare Grunt, expect more of them in the same area.

What’s going on?! Anyway, head east along the cart tracks and you’ll reach another grunt.

Follow the path along and you’ll come upon a pair of grunts. Your rival will catch up though and when you’re ready you can join her and fight a double battle against these two.

Reflect and Light Screen are doubly useful in Double Battles!

If Chespin was your starter

If Fennekin was your starter

If Froakie was your starter

Continue past the grunts until you find the Escape Rope . From there, go over and approach the scientist. Speak with him and he’ll offer you and your rival a fossil each. You get to decide which one you want. The Jaw Fossil can be used to revive a Tyrunt, a Rock/Dragon-type .

The Sail Fossil can be used to revive a Amaura, a Rock/Ice-type . Choose one and then the scientist will leave. After he does; your rival will mention that they’re heading to the next gym. Might be an idea to go yourself! Anyway, you can either backtrack out of this area; or simply use the Escape Rope you just found to leave.

Take Old Amber to the Fossil Lab to turn it into the fearsome Aerodactyl.

If you use Rock Smash to shatter the small rocks, you can find Pokemon Fossils, which you can revive at the Fossil Lab. Right now, you can only find Old Amber (which is still pretty awesome), but after beating the Elite Four you’ll find many more fossils, including more Sail and Jaw fossils!

Once you’re outside; heal up and jump onto the Rhyhorn. Ride it back to the start of the route and head back into Ambrette Town. Head to the Fossil Lab. Inside talk to the scientist at the counter and he’ll restore your fossil. You’ll get the new Pokémon immediately! After that, prepare yourself to head into Route 8 again.

And when you’re ready, head on through the aquarium and out the other side!

Become the ultimate Pokémon champion with our greatest Pokémon strategy guide yet. Inside we cover: