Azure Bay is really easy to miss: follow the water north on Route 12.

Follow the water around and you’ll run into a swimmer.

Once he’s beaten, head west to the female swimmer.

Head north from there, over to the small island. Speak with the man there that’s not the fisherman to receive an Ampharosite . Oh yes! Now you can evolve Ampharos into Mega Ampharos ! Anyway, speak with the Fisherman here for a fight.

To the east of the Fisherman is a Photo Spot. Feel free to make use of it. Now head back into the water and move north-west from the island. You’ll bump into the final trainer of the area here. 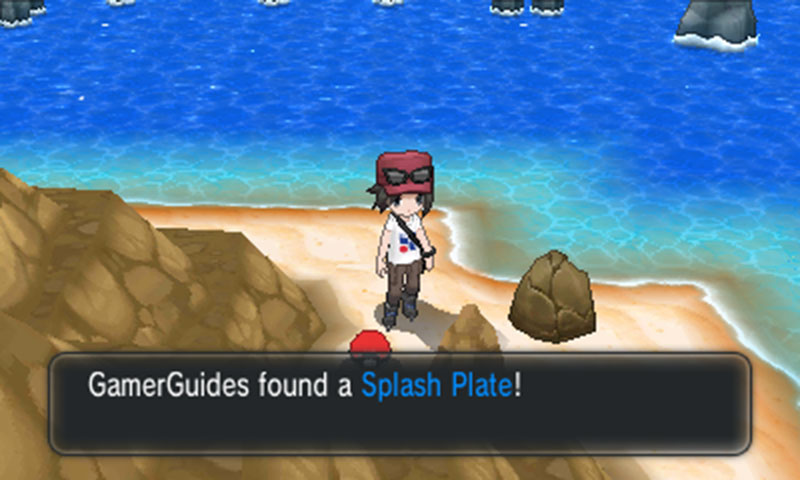 Head north from her and you’ll reach an item with tall grass on it. That and a Big Pearl . Snatch it up then head north, north-west and you’ll reach Sea Spirit’s Den . Head around behind it to find a Splash Plate .

You can head inside; but there’s not going to be any use for it until well after you beat the Elite Four. That’s all there is to do here; so feel free to Surf your way back to the beach that you came from on Route 12 - Fourrage Road . When you do, head east from it into Courmarine City!

Been wondering about all these plates you’ve been picking up, like the Splash Plate ? As well as boosting the damage of moves of the plate’s type when held by a Pokemon, the plates also change the type of legendary Pokemon Arceus and its signature move Judgement .

Become the ultimate Pokémon champion with our greatest Pokémon strategy guide yet. Inside we cover: