This quest is inextricably linked with the quest Slaughterhouse Clive, which you can start by talking to Catherine Malin in Fallbrook. To actually start this quest, you’ll need to sneak into the C&P Boarst Factory and talk to Clive Lumbergh, a rather involved process that’s covered in significant detail in the aforementioned Slaughterhouse Clive - you’re highly suggested to peruse that quest for all the options available to you before starting this.

After you reach Clive Lumbergh, talk to him and when you get the opportunity respond with "SubLight sent me to kill you. But I’m sure we can work something out." and Clive will ask you to kill Catherine for him. If you respond with "Good deal. I’ll kill Catherine for you." or "I’ll think it over and get back to you." you’ll start the rather obscure quest A Cysty-Dance with Death which, for obvious reasons, is rather inseparable from Slaughterhouse Clive. 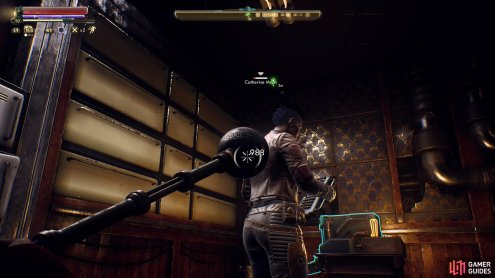 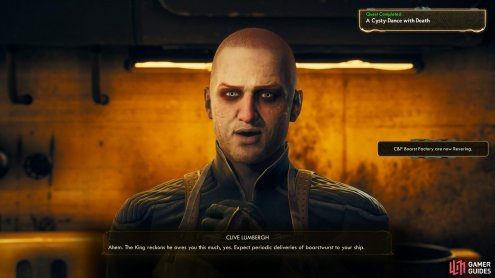 This isn’t a difficult or complicated task, just return to Fallbrook, crouch down somewhere near Catherine Malin, and kill her. If you make a ruckus you may have to kill a number of SubLight goons, but so long as you don’t go running around and drawing numerous foes to you, it should remain a relatively small-scale slaughter. We just shot Catherine, stayed hidden in her room, let our companions scrap with the SubLight thugs, and when the battle music ended we waltzed out of Fallbrook. This does entail earning some negative SubLight reputation, of course, so you may want to make sure you’re done with their questline (Salvager in the Sky, Space-Crime Continuum, The Ice Palace and The Chimerist’s Last Experiment) before doing this.

Note: If you can pull it off, dispatching Catherine Malin via a one-hit kill sneak attack with a melee weapon will prevent the other SubLight goons from reacting to your action, significantly limiting the hassle involved. We were able to do this via a power attack with an upgraded Telescoping Staff Mk 2, so it shouldn’t be terribly difficult in the grand scheme of things.

When Malin is dead, simply return to Clive at the C&P Boarst Factory and he’ll promise you regular deliveries of boarst, and give you some more immediate, practical rewards, including 1,125 Bits, two cans of Boarst 'n Baked Beans, two Boarst Pockets, two links of Boarst Wurst and Clive’s Cleaver, the latter of which being a one-handed melee weapon with a substantially boosted critical hit chance. In addition you’ll gain enough positive reputation with the C&P Boarst Factory to instantly earn "Revering" status - quite possibly enough to hit 100% positive, in fact.