This quest should start after Drinking Sapphire Wine provided you completed the latter satisfactorily, which generally means not being a jerk and encouraging Parvati's romance with Junlei. Provided you did so, leave the Unreliable and return and talk to Parvati after completing the aforementioned quest and this one should start. 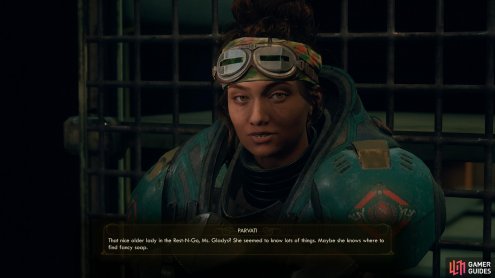 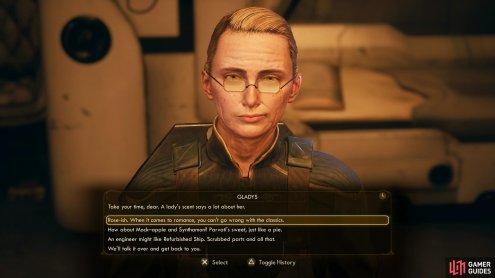 Seems like Parvati has heeded your advice, and is ready to advance her relationship with Junlei. Problem is... well, Parvati's personal hygiene isn't all it could be. No reason for it, either, the Unreliable has a shower, but we digress... offer to help her out and she'll ask you to take her onboard the Groundbreaker to shop for "bath supplies". Considering all the help she needed to navigate mundane adulting in the last quest, this shouldn't be a surprising request, and however tedious it may be... well, the XP is worth the bother.

Specifically Parvati wants to ask Gladys for advice, and getting grooming information from a black market dealer is... well, it's an idea. When you're ready to gain some XP for talking and a bit of legwork, return to Groundbreaker with Parvati in tow, then go meet Gladys at her office in the Rest-N-Go. Talk to the sweet old criminal and say "My engineer's looking to do some deep cleansing. Wants to impress Chief Junlei." and she'll prove... surprisingly helpful. Make a meaningless choice about which particular package you want (we went with Rose-ish) and Parvati will pay for it.

After you give Parvati her ablution accessories she'll next ask for some rather specific food-stuffs with which to ply Junlei: dustback casserole from Stellar Bay and sweetheart cake from Cascadia. Both require you to travel to Monarch, which is ideally - but not necessarily - done after completing either Passage to Anywhere by buying a Stellar Bay Navkey from Gladys, or by acquiring such a Navkey by working for the Board after the quest Long Distance. Failing either of those two options you can always just land at the Cascadia Landing Pad - the only option available to you if you don't get a Stellar Bay Navkey - but this is quite dangerous, not to mention it requires a good, long bit of travel across the surface of hostile Monarch. 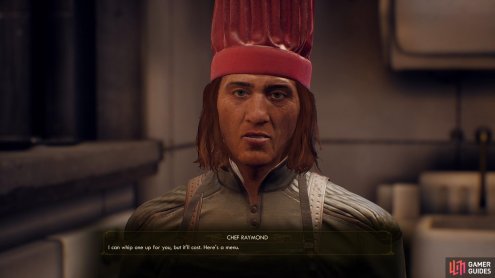 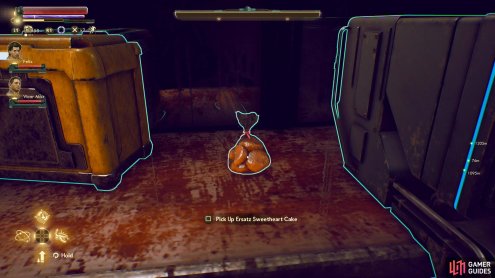 Of the two items you need to fetch from Monarch, the Dustback Casserole is by far the easiest of the two to acquire. Land at or otherwise make your way to Stellar Bay and from the southwestern gate head northeast (away from the gate) to find two buildings blocking your way. To the left are some buildings you can't enter, while to the right is an unmarked, unnamed restaurant, inside of which you'll find Chef Raymond.

Note: This is also where you'll find Akande's contact, Everett Gill, if you started the quest Signal Point in Space.

Talk to Chef Raymond and ask him about this "dustback casserole", which is rather out of style now, not to mention hard to acquire the ingredients for due to Monarch being a bit of a hell hole. Parvati's stupid gift will set you back a whopping 3,000 Bits, but if you pass an [Intimidate 55] check you can get that dropped down to 2,000 Bits. Pay whatever you must to end up with a Terra One Dustback Casserole.

Getting your hands on the casserole was cake - expensive, but still not difficult. The cake, however, won't be... well, cake. Cascadia, specifically the southern half of Cascadia where the Sweetheart Cakes are, can only be reached by trekking on foot from the eastern side of Monarch to the western side. You cannot reach the southern half of Cascadia from the northern half, the latter being where the Landing Pad is. Simply saying "follow the road from Stellar Bay south and west to Cascadia" isn't an unfair characterization of what you need to do, but it does belie the complexity of the task at hand. It's quite a stroll, taking you past Amber Heights and Fallbrook, whereupon you'll be forced to fend off countless marauders, raptidons and mantids along the way.

Once you reach Cascadia you'll need to exterminate the marauders that garrison the otherwise abandoned city. Clear Cascadia and enter a bar along the western end of the city and search a counter behind the bar to find the Sweetheart Cakes you're after.

Note: You may have to travel to the southern half of Cascadia during the quest Canid's Cradle, assuming you want to make peace between MSI and the Iconoclasts (and you completed The Commuter and Pay for the Printer by completing Zora's optional objectives). That being the case, you may want to wait until you can accomplish both of these in one run, or failing that, open the gate between the northern and southern halves of Cascadia to shorten any return trips. 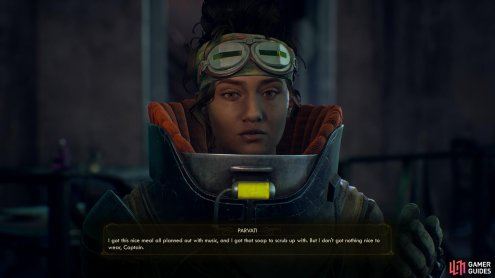 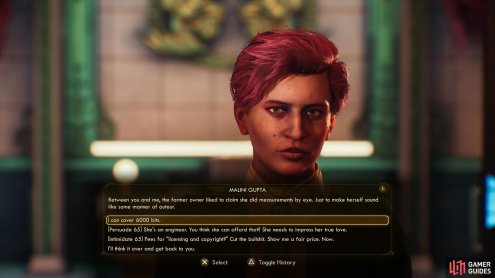 Acquire both the items Parvati wants from Monarch and she'll identify a new problem. She's got ablutives, she's got food, but she doesn't have any clothes to wear worthy of these things. What's the point of getting yourself clean and having delicious food if you have to eat it in your stinky old clothes? The only solution, then, is to travel to Byzantium and buy her some new clothes. This is turning into one expensive date.

Return to Jolicoeur's Haberdashery and talk to Jolicoeur (or her successor, if you completed the quest Makes Space Suits, Won't Travel) and request an outfit for Parvati. The damage this time is 6,000 Bits, which is... quite absurd. At this point she might as well have you spend all this money buying vital components for the Groundbreaker instead of stupid meals and outfits - would be a lot more practical of a way for Parvati to flush all your money down the toilet impressing Junlei. Anyways, you once again can pass a dialogue check - [Persuade 65] or [Intimidate 65] - to lower the price to a more manageable but still outrageous 3,000 Bits. 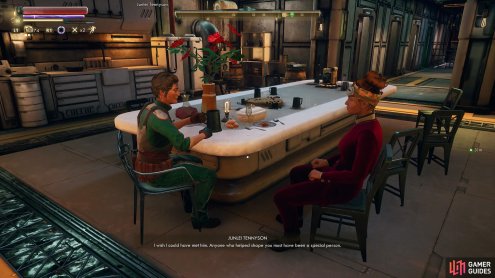 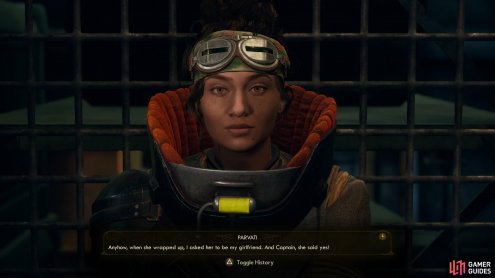 When you have all those items, return to your ship and talk to Parvati, who will immediately pivot to trying to get you to hunt down some part Junlei wanted for the Groundbreaker. We must be prescient. This time, shut Parvati down and force her to stop wasting your time and money in a futile attempt to compensate for her own personal neuroses.

Fly back to the Groundbreaker and talk to Parvati again and send her off on her expensive little date. You'll find yourself back in your quarters, after which you'll need to head upstairs to the kitchen and witness the date in progress. Exit the ship, then return and talk to Parvati yet again to finally finish this quest. This will earn Parvati the Enchanted Evening perk, which boosts the duration of food and drink by 25%.