Visit Jolicoeur’s Haberdashery in Byzantium and talk to the proprietor, Celeste Jolicoeur, and after she gets done ogling you she'll offer to make an outfit worthy of you... if you can find the right materials. 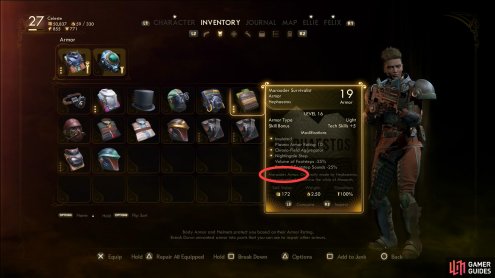 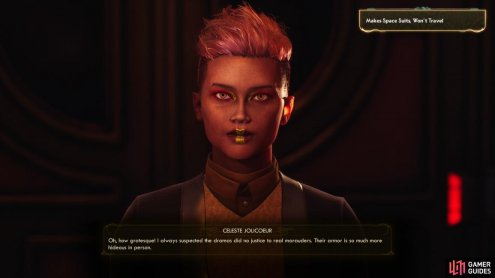 First up, she wants you to model some outfits for her. Three outfits, in fact, including both clothing and headware - these outfits include a Marauder set, a Spacer set and an Iconoclast set. How do you know what armor is part of what set? Well, the description of each suit should give you a clue, and by clue we mean it'll usually outright say it. In any event, below you'll find a table of all the different suits of armor and helmets that constitute parts of clothing sets.

Note: If you need to force enemy respawns or shop restocks, just sleep in the Unreliable for a few days.

Once you have six different pieces of set armor (one clothing item and one piece of headware from each set) return to Jolicoeur’s Haberdashery on Byzantium, put a matching clothing set on your protagonist and talk to Celeste. Repeat the process for each set and she'll work out the design of her masterpiece - Barbarian-chic.

Unfortunately she'll need authentic bits from some of Halcyon's most dangerous beasties, including ten units of Primal Leather, three Raptidon Flank Hides and some Mantiqueen Chitin. Suffice to say, this will involve some running around. And in case you're wondering, no, none of these components will spawn before you're at this phase in this quest. Suffice to say, if you unlock this part of the quest before you travel to Monarch, you'll almost certainly have it mostly accomplished just by doing the quest there. Also worth noting, you can show your discontent with the task by passing an [Intimidate 40] check, which will compel Celeste to give you 375 Bits. Better than nothing.

To get your custom Jolicoeur outfit you'll now need to go around Halcyon, killing wildlife and collecting the parts that Jolicoeur needs. Again, these include ten units of Primal Leather, three Raptidon Flank Hides and some Mantiqueen Chitin. You can find them in the following locations:

When you have all the parts listed above, return to Jolicoeur’s Haberdashery on Byzantium and present the pieces to her. She'll dub the outfit she plans to create "Chimaera". It's only missing a bit of flair, which she'll ask you to pick from the Halcyon Parcel Service building (HPS). At least it's a simple errand this time. She'll give you her Writ of Consent, after which you'll need to head northwest from Prosperity Plaza to find the HPS building to the left (southwest).

Once inside, talk to the left-most cashier - Olive Yates - and tell her you're here for Jolicoeur's package... only to be referred to Window B. Sigh. Head to the middle window and talk to Wanda Chen, who gives you attitude before telling you the parcel is out for delivery. Leave the HPS building and continue down the street to the northwest, then turn southwest at the intersection, head up some stairs, across a bridge, and when you reach a four-way intersection in the Estates District search a corner house to find a note telling you that the delivery was unsuccessful, and that the parcel is being returned to the HPS building. Reminds me of trying to get my replacement Xbox 360 from FedEx...

Return to the HPS building and talk to the lady behind the middle window again and try to get your parcel again, only to be referred back to Window A. Sigh. Return to the left-most window again and this time you'll be met with success - either pass a [Persuade 40] check or show off the Writ of Consent and you'll be good to go. No, seriously. Take it and run. 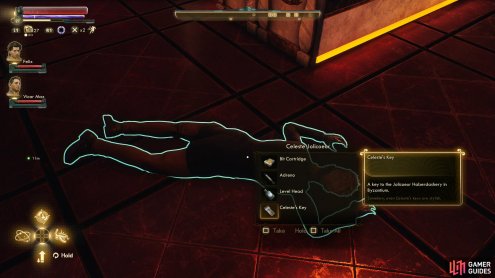 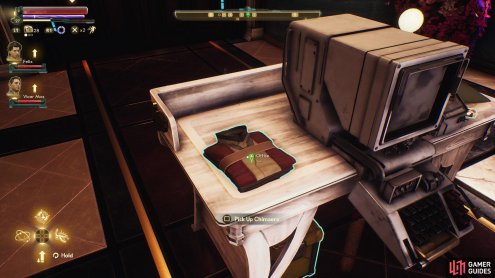 Make your way back to Jolicoeur’s Haberdashery only to find out that she fell afoul of the corporate jackboots, who executed her for "practicing a subversive aesthetic." That's some hardcore corporate fascism, there. After the guards leave, loot Celeste to obtain Celeste's Key, then head into her office to the south and search her desk to find Chimaera, a fashionable suit that has a high amount of armor and gives a +10 bonus to your Dialogue skills. One of the better suits in the game for a protagonist who likes to talk their way out of trouble while also being able to survive in combat should they choose to cause trouble.

Note: If you wear Chimaera along with A Nice Hat you'll gain the trophy/achievement "Well Dressed". You can find A Nice Hat in the church in the ruins south of Stellar Bay on Monarch.

Note: In case you're curious, Celeste Jolicoeur will be replaced by Malini Gupta, so Jolicoeur’s Haberdashery will stay in business.