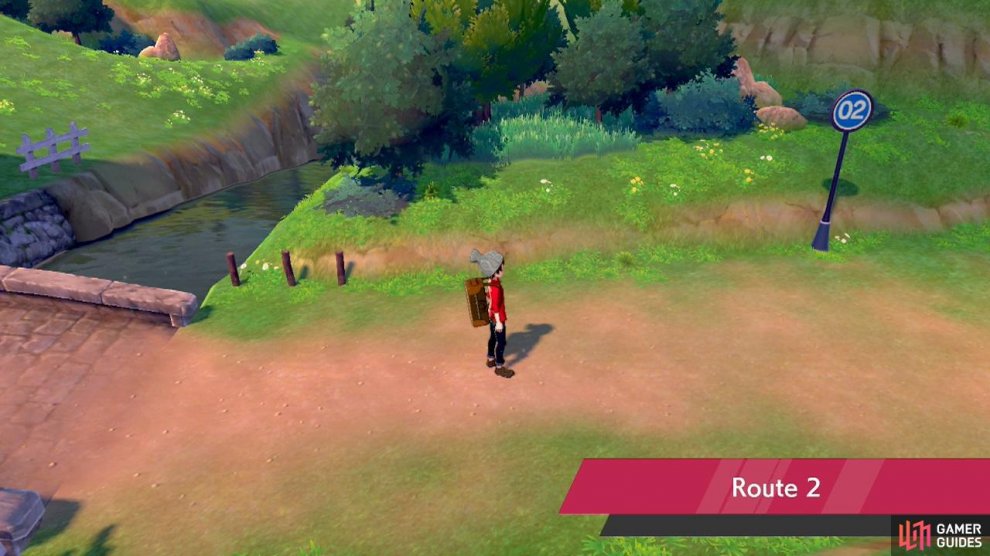 This is where the action begins to ramp up somewhat. Start by heading right. When you go past the number 2 signpost, you’ll reach Hop standing before some tall grass. As he’s talking, he gets cut off by Leon, who’s here to teach you about catching Pokémon. If it’s your first time, be sure to pay attention. However, if you caught some Pokémon on Route 1 already, Leon will skip the lecture as you already know how.

Either way, you’ll receive 20 Poké Balls from Leon. This is a very generous amount at this early stage. But do keep an eye on how many Poké Balls you have left. If you’re ever running low, you can return to any Pokémon Centre and speak to the Poké Mart clerk (on the left-hand side if there’s two) to buy additional Poké Balls.

There are multiple ways to encounter wild Pokémon. The first and most obvious way is to bump into them, when they’re actively roaming the overworld. This will probably be how you encounter most of your Pokémon. The good thing about this method is that you can see what Pokémon you’re going to encounter.

Also, when you’re walking in or near tall grass, you might see some of the grass shake, with an exclamation mark above it. Walking into the shaking grass will trigger a random encounter like in previous games. The Pokémon you encounter via this method can be different, so it’s worth trying your luck.

Afterwards, Leon and Hop will both dash off into the distance. Follow them by heading right, through the patch of tall grass. Next, the path will gradually bend towards the north. As it bends, there’s another area of tall grass to wade through. Once you’re clear of the grass again, carry on north. Eventually, the path will gradually bend towards the right. Around here, will be your first Pokémon trainer.

Throughout the Pokémon world, there are many Pokémon trainers like yourself. Some of these trainers are waiting on routes and other areas, to find other trainers to battle. If a trainer makes eye contact with you, a Pokémon battle with ensue. Certain trainers can be skipped if you’re smart.

Trainer battles are functionally the same as wild battles. However, trainers can have teams of up to 6 Pokémon (although very few have anywhere near the maximum amount). After beating one of their Pokémon, they may send out another Pokémon. Winning a battle nets you money and more experience points than usual. 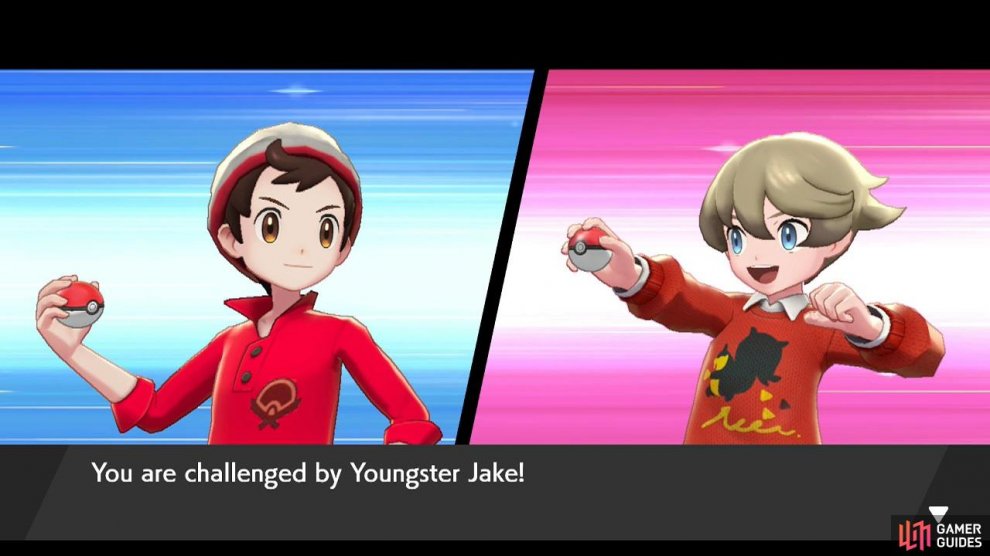 Skwovet is a weak early-game Normal-type. For an easy win, use your starter and pick their STAB move (Branch Poke, Ember or Water Gun).

Continue past Jake, into the next patch of tall grass. Here, there’s a branch in the path of sorts. Keep along the top and head for the red signboard. Give it a good read if you want, but be sure to grab the 2 Potions on the floor nearby. Next, jump over the ledge below. Go a few paces right. The path will stretch north and you should be able to see another purple-roofed building in the distance.

For now, head right through another patch of tall grass. Follow the side path as it twists around. Pick up the 3 Poké Balls at the end, then jump off the ledge on the left to return to the main path. Now head north. Soon, there’ll be a female trainer keeping watch. Not every trainer has to be fought; if you want, you can skip this one by going through the tall grass on her left.

This is a new Water-type that you can encounter in this very route. Since it’s a Water-type, Sobble and especially Scorbunny users should be careful. That said, this Chewtle doesn’t have any Water-type moves, so you can still use them, but whack it with your Normal-type moves instead. Otherwise, a freshly caught Yamper can Nuzzle it to oblivion.

You’re nearly there! Keep running along the path as it turns right and then starts bending back towards the north. After the bend, there will be another cobblestone bridge and a Youngster getting ready to jump unsuspecting people trying to cross it.

Little Benjamin here has two Pokémon commonly found on Route 1. Blipbug is–well, you can tell from its name–a Bug-type. Scorbunny users can roast it with Ember, while Grookey’s Branch Poke is ill-advised. Besides that, pretty much anything works, as it’s far from the strongest critter in the woods.

Nickit is a thieving Dark-type fox. If you’re curious about its name, over here, "nick" is slang for "steal". "Oh my gosh, they nicked my wallet!" Anyway, you probably don’t have anything super-effective against Dark, but again, it’s not that strong. If in doubt, use your starter. 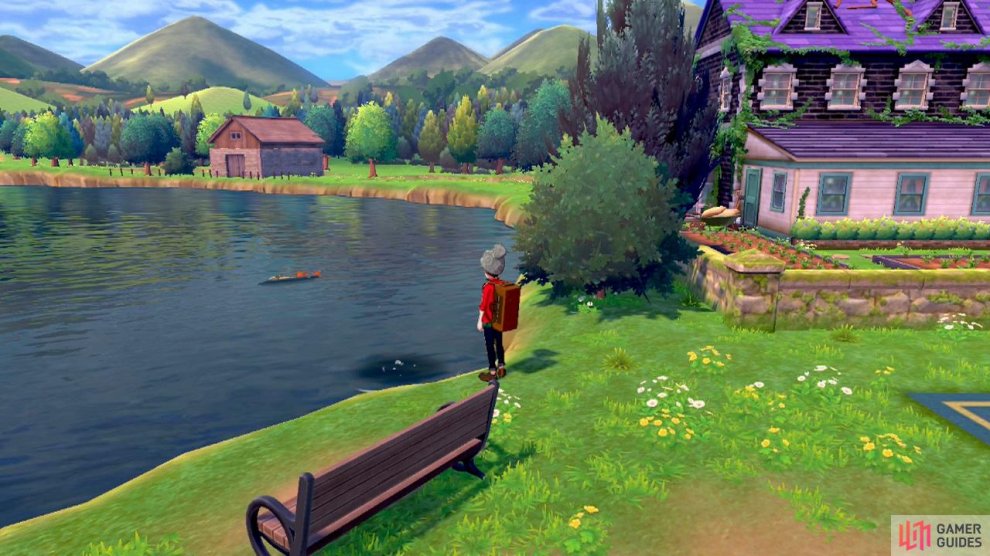 Cross over the bridge. The professor’s home is just up ahead and you should see Hop, Leon and a third person in front of the entrance. Let’s not keep them waiting… actually, let’s keep them waiting. Go left, across the court. You’ll reach the lake side. Head over to the bench and approach the water just above it. There should be some rippling water that you can interact with.

Whenever you see rippling water near the land’s edge, you can partake in a spot of fishing. Unlike prior games, you don’t need to physically acquire a fishing rod to start fishing. Somehow, you’ve already got a fishing rod stashed away somewhere, maybe in the deepest depths of your bag!

To start fishing, inspect the rippling water by pressing the A (or ZL, ZR) button. Your character should pull out their rod if you’re close enough. Now you wait. After a while, your rod should shake and an exclamation mark will appear. Quickly press the A button to reel in a wild Pokémon!

Once you’ve done a bit of fishing or otherwise, go back and follow the main path to its destination. You’ll be introduced to Professor Magnolia and shown into her house. After a nice friendly chat, Leon agrees to endorse you for the Gym Challenge, on the condition that you and Hop show him an amazing battle. He’ll heal up your Pokémon, then Hop will run off outside to wait for you.

When you’re ready, leave the professor’s house. Although, like Hop’s house, go ahead and give it a good look around if you’d like. Upstairs, you can find Sonia’s bedroom. We do wonder where Magnolia and her husband sleep though. Back outside, head south past the front gate. Hop will shout at you from the court. Go over and speak to him to begin the battle.

For new players, it can take a while before you’re familiar with every Pokémon’s type, as well as their type match-ups. But if you read our guide, we’ll give you suggestions for what to use.

Additionally, when encountering a Pokémon you’ve fought before, the game will tell you how effective (or not) your moves are. Also, if you press the Y Button, you can check the details of the current Pokémon in battle, including their type(s). 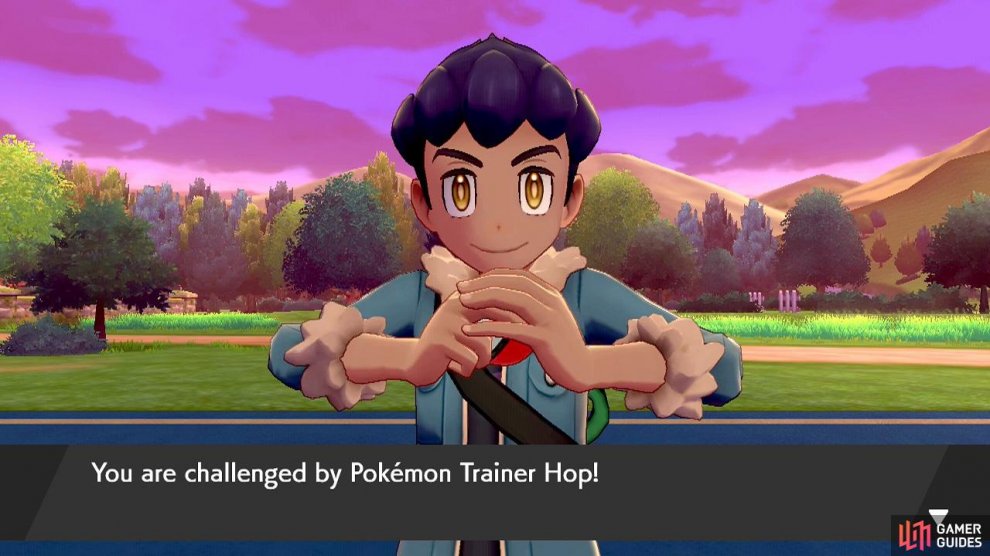 Hop leads with his Wooloo as before. Now that your starter has a STAB move (Branch Poke, Ember or Water Gun), it should be much easier to defeat.

Next, he may send out Rookidee (although the order depends on the AI). This is a Flying-type that you’ve probably seen a lot of on the way here. Grookey users should switch out. Use Yamper if you have it.

Finally, Hop has his starter. This is probably the easiest Pokémon to defeat. Like last time, just use your starter and select their STAB move.

When the battle is over, Leon will uphold his end of the bargain and give you a Letter of Endorsement. This means you can officially enter the Gym Challenge. Amidst the excitement, a pair of Wishing Stars will come falling from the sky. You and Hop will receive a Wishing Star each. Afterwards, Professor Magnolia will hand you a Dynamax Band that uses the power of the Wishing Star.

While on the overworld, you can press the Y button to access the "Y-Comm". Here, you can trade, battle or swap League cards with other players locally or via the Internet. You may also see stamps along the left side of the screen, corresponding to things you or other players have done (like catching Pokémon).

In addition, "Victory Station" will appear in the main menu. "Battle Stadium" lets you engage in fun or serious battles online, while "Live Competition" is for friendly or official tournaments held locally. Also, if you idle in the splash screen, the game will compare various stats between owners of Sword and Shield.

Well, you got what you came here for! Exit the professor’s house. Hop will be waiting just below. Go over to him and he’ll give you some tips about dealing with wild overworld Pokémon.

The Subtle or Unsubtle Approach?

When you’re traveling inside tall grass, if you nudge the left control stick slightly instead of pushing it the full distance, your character will crouch and move slowly. In this state, wild Pokémon will generally not notice you. This is useful if you want to avoid encounters.

On the other hand, if you want to attract their attention, click the left control inwards (like a button). This will cause your character to whistle. Any nearby Pokémon will hear this and react appropriately. This is particularly useful for flying Pokémon in the Wild Area. 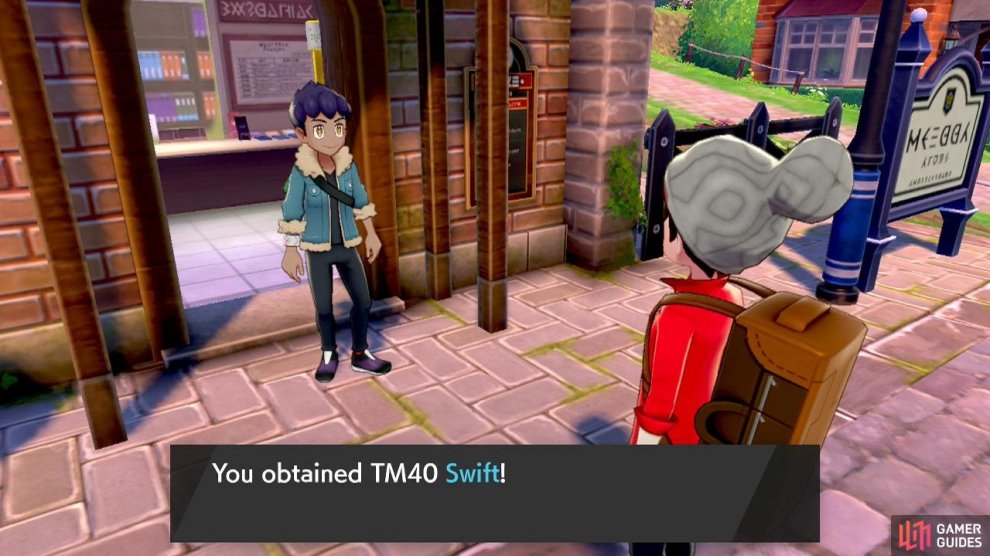 Your friendly rival will give you TM40 Swift. Afterwards, he’ll enter the train station. Follow him inside. Right as you’re about to depart, both your Mum and Hop’s Mum will arrive on the scene. You’ll receive a set of Camping Gear so you can set up camp during your adventures. Finally, the pair of you will board the train to the next city, Motostoke.

TMs, short for "Technical Machines" are re-usable items that you can use to teach specific moves to your Pokémon. For example, TM40 Swift teaches Swift, a Normal-type move that never misses. To use them, open your Bag and navigate to the "TMs" tab. Then select a TM to use.

Altogether, there are 99 TMs to collect. TMs are great for teaching interesting moves that your Pokémon wouldn’t otherwise be able to use. Just keep in mind that not every Pokémon can use every TM. When selecting a TM, it will show which Pokémon can or cannot learn the move.

There are a few stand-outs here. Yamper is an adorable Electric-type corgi. It’s not particularly strong right now, but it can evolve into the versatile Boltund. Also, its Nuzzle move–which causes guaranteed paralysis–is excellent for weakening opponents, including wild Pokémon!

Chewtle is a Water-type that’s also weak, but can evolve into the slow but formidable Water and Rock-type Drednaw. Worth considering if you didn’t pick Sobble. Galarian Zigzagoon is a Normal and Dark-type that can eventually become the fearsome Obstagoon. If you need a Grass-type, there’s Seedot/Lotad as well.