After catching a member of the Swords of Justice (Cobalion, Terrakion and Virizion), Sonia will reward you with 10 lots of Exp. Candy (S for the first, M for the second and L for the last one). If you were expecting a cool reward from Sonia for catching all three, we’re sorry to disappoint. 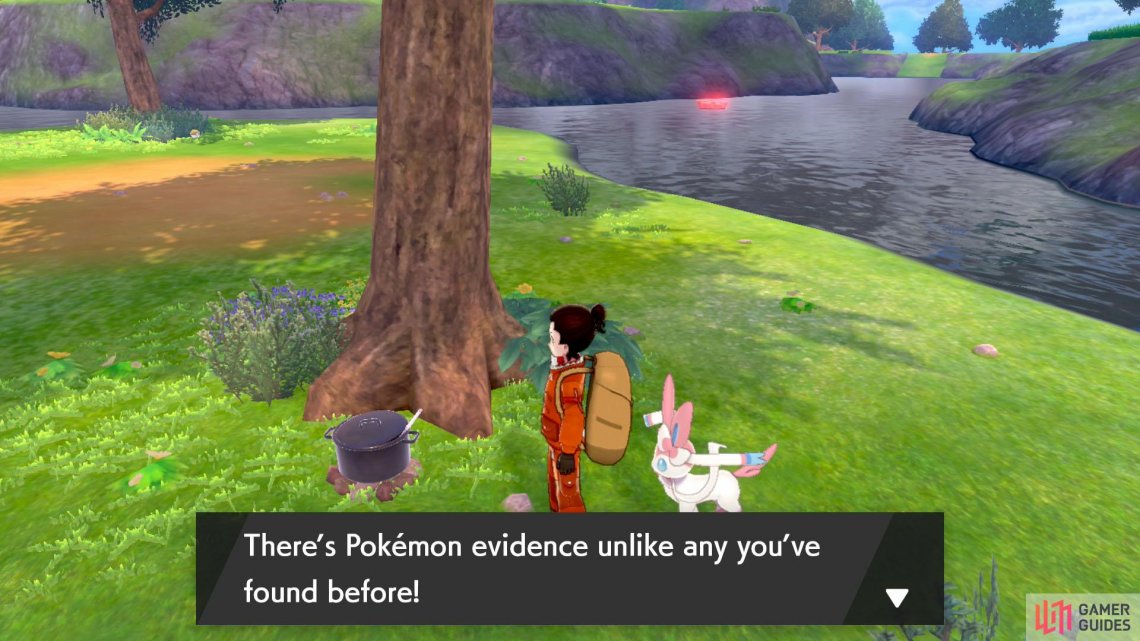 (1 of 2) Look for an island with a pot that somebody left behind. 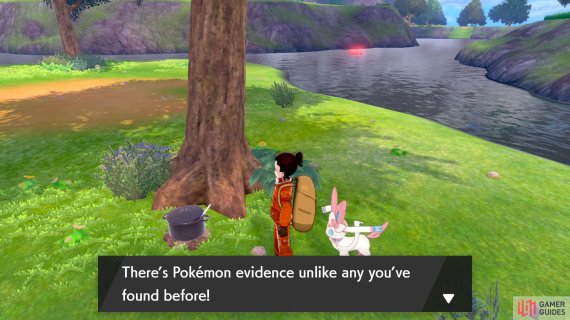 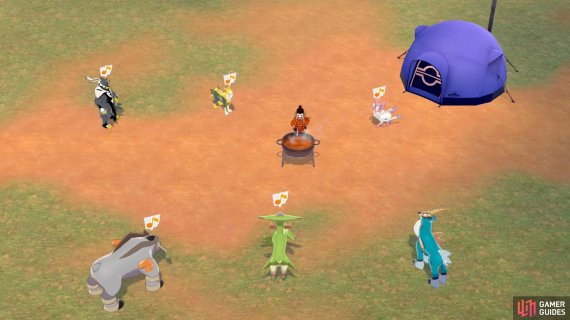 Look for an island with a pot that somebody left behind. (left), Then cook your best curry for the Swords of Justice! (right)

That said, you can find something really nice, which the game doesn’t tell you. Fly over to Dyna Tree Hill, where the Galarian birds were. Turn right and enter the lake via the nearby slope. Paddle straight ahead, until you reach a small island with two trees. Next to the tree on the left is an abandoned pot.

After you’ve reported the capture of all three Legendaries to Sonia, there should be some small footprints by the pot. Now here’s where you need to think outside the box… Or consult the Internet! While you’re right near the pot, place Cobalion, Terrakion and Virizion in your party. Then go into Pokémon Camp and make any curry. 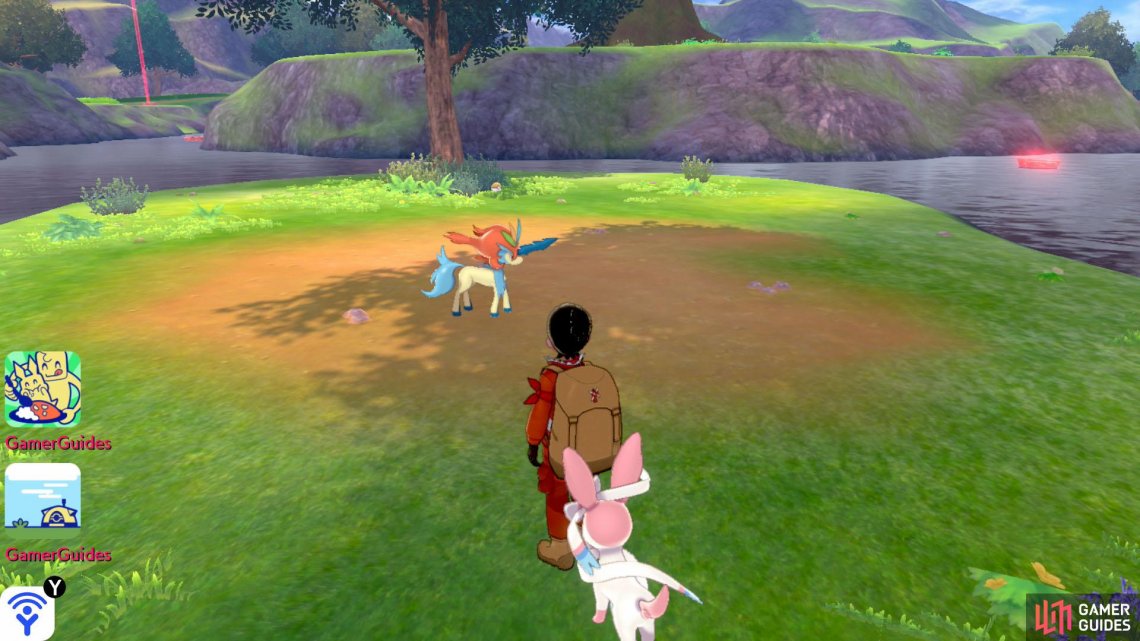 It just couldn’t resist the smell of curry…

When you exit the camp, Keldeo should immediately spawn in the centre of the island. This is it! A rare chance to catch a Mythical Pokémon!

Oops, Got too Excited…

Should you accidentally knockout Keldeo or leave the battle for whatever reason, don’t panic. Keldeo will be gone, but you can lure it back out into the open again.

First, you’ll need to exit and re-enter the area. Easiest way is to fly to Dyna Tree Hill and come back here. Then repeat the same process (cooking the curry by the pot) to respawn Keldeo. 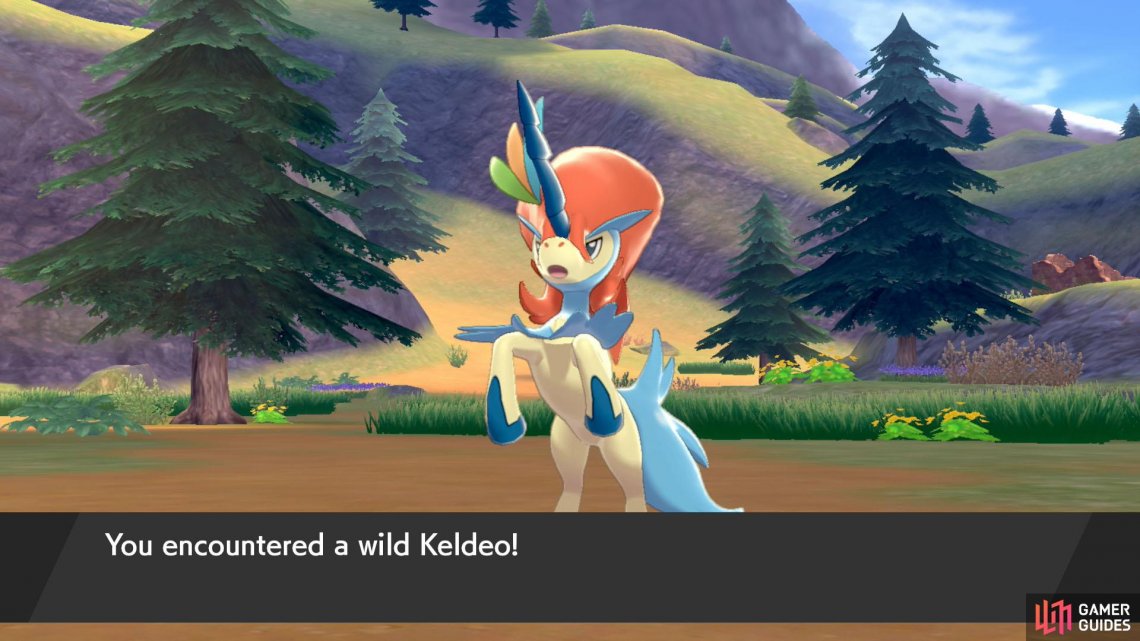 It’s not often you get to catch a Mythical Pokémon, although we suppose you did have to go through some hoops. Anyway, Keldeo is slightly lower Level than its friends, but it’s no less dangerous. Unlike the other Swords of Justice, Keldeo is primarily a special attacker, although its Secret Sword targets the opponent’s Defense stat.

Resolute Keldeo’s other moves include Sacred Sword, which ignores its opponent’s stat changes, Swords Dance to boost its Attack (pretty useless here) and Hydro Pump. To weather its attacks, we advise bringing a Ghost-type. If it can resist Water too, that would be swell (for example Gourgeist or Dragapult).

Though it’s a Mythical Pokémon, catching it requires no new skills. We suggest paralysing it at the earliest opportunity, then weaken it down, ending with False Swipe to get it down to 1 HP. From there, switch over to your Ghost-type if you haven’t done so and start unloading your best balls. As it’s a Water-type, consider using Net Balls.

To be Resolute or Not?

The Keldeo you catch will already be in its Resolute Form. If you want to revert it to its regular form, you’ll need to make it forget its Secret Sword move. Conversely, to change Keldeo into its Resolute Form again (or a different Keldeo), teach it Secret Sword via the move relearner at any Pokémon Centre.

Besides its appearance, there’s no difference between regular Keldeo and Resolute Keldeo. So it boils down to whether you need Secret Sword or not. Since Secret Sword is arguably Keldeo’s best move, there’s no reason for it not be Resolute. But, hey, we’re not going to choose for you!