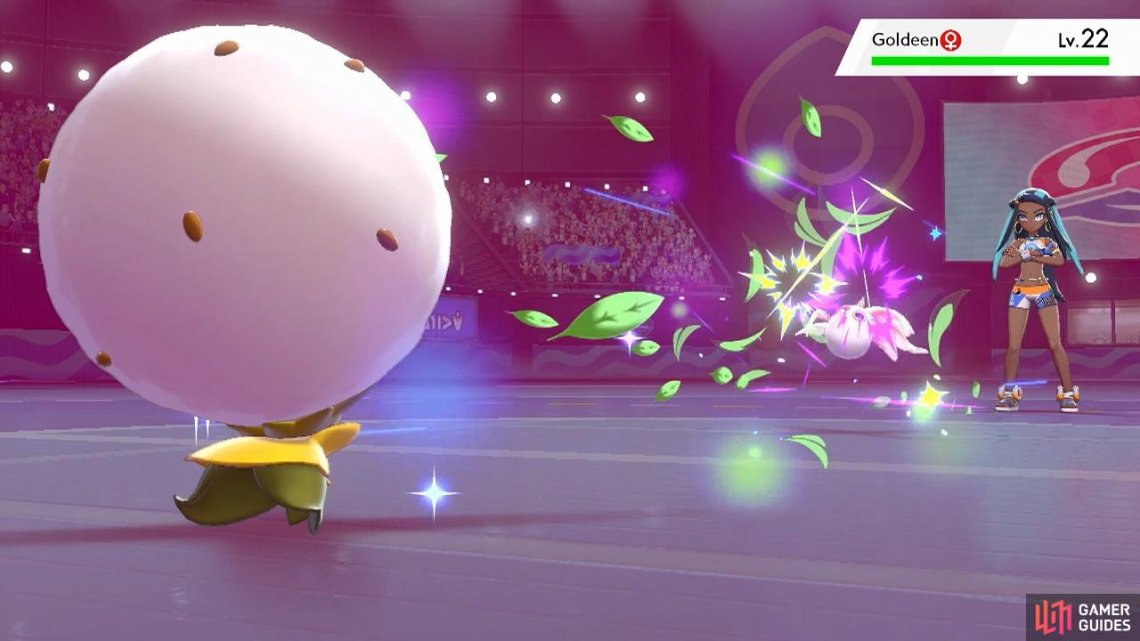 The road to becoming an expert starts with the basics.

Pokémon battles are a crucial element of the series. No matter which way you turn, a battle’s never too far away. Whether it’s a wild Pokémon determined to protect its turf or a fellow Pokémon trainer who’s keen to prove their superiority, you’ll need to learn to defend yourself, lest you be chewed alive. Thankfully, your Pokémon pals are happy to put up a good fight!

It doesn’t matter if your foe is a trainer or wild Pokémon; the mechanics are the same. When a battle begins, you and the opposing trainer (if there is one) will each send out one Pokémon. In your case, you’ll automatically send out the first Pokémon in your party–the one in the top-most position. But if that Pokémon has fainted, you’ll send out the next available one.

Battles in Pokémon are turn-based. Each turn, you and your opponent must select an action to perform. You’ve got all the time in the world, so don’t rush and carefully consider your options. However, during multiplayer battles, there will be a time limit in place. Although when you reach that stage, you should have plentiful battling experience under your belt! 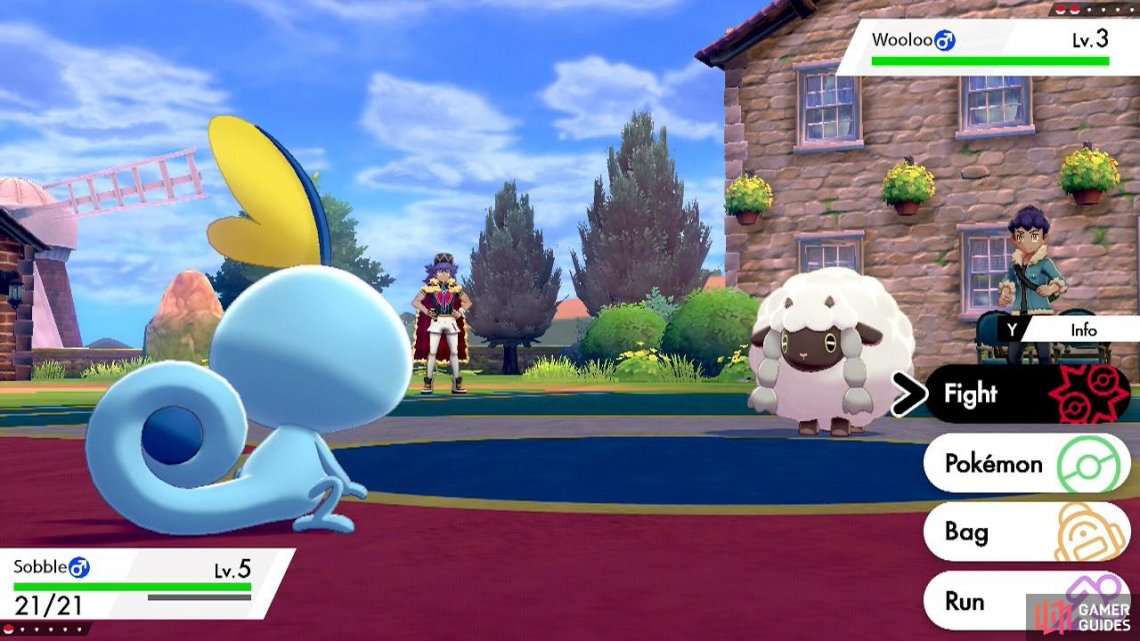 You can also press the Y Button before choosing an action to check your Pokémon or opponent’s status.

During a battle, the following options will be available to you:

After both sides have selected an action, the Pokémon with the higher Speed stat will generally go first, followed by the remaining Pokémon. However, some moves like Quick Attack have increased priority, so be cautious–especially when your Pokémon are at low HP. If switching or using an item, that action will always have priority over a Pokémon’s moves.

If a Pokémon is hit by a move, their HP may decrease. Once a Pokémon’s HP falls to 0, it will faint and be removed from battle. During a trainer battle, the owner of a fainted Pokémon will need to send out another Pokémon from their party; if they have no more, they lose the battle. Meanwhile, when a wild Pokémon is defeated (or captured), the battle immediately ends.

When you knock out (KO) or capture a Pokémon, all of your Pokémon will earn experience points, although Pokémon that didn’t contribute to the fight will earn less. Once a Pokémon has gained enough experience, they will Level Up, increasing their stats. Additionally, they may learn new moves or even evolve into a stronger form. Defeating a trainer will also reward you with money.

Nobody wants to lose, but if all of your Pokémon are defeated, don’t panic! You’ll be transported back to the last Pokémon Centre that you visited, albeit with some of your pocket money gone. More importantly, you’ll retain all of your game progress. So chin up and get ready for that rematch!

This only applies to battles against NPC trainers during the main campaign and wild battles. Nothing will happen if you lose in multiplayer battles, Max Raid Battles or battles in the Battle Tower (except maybe some hurt pride). 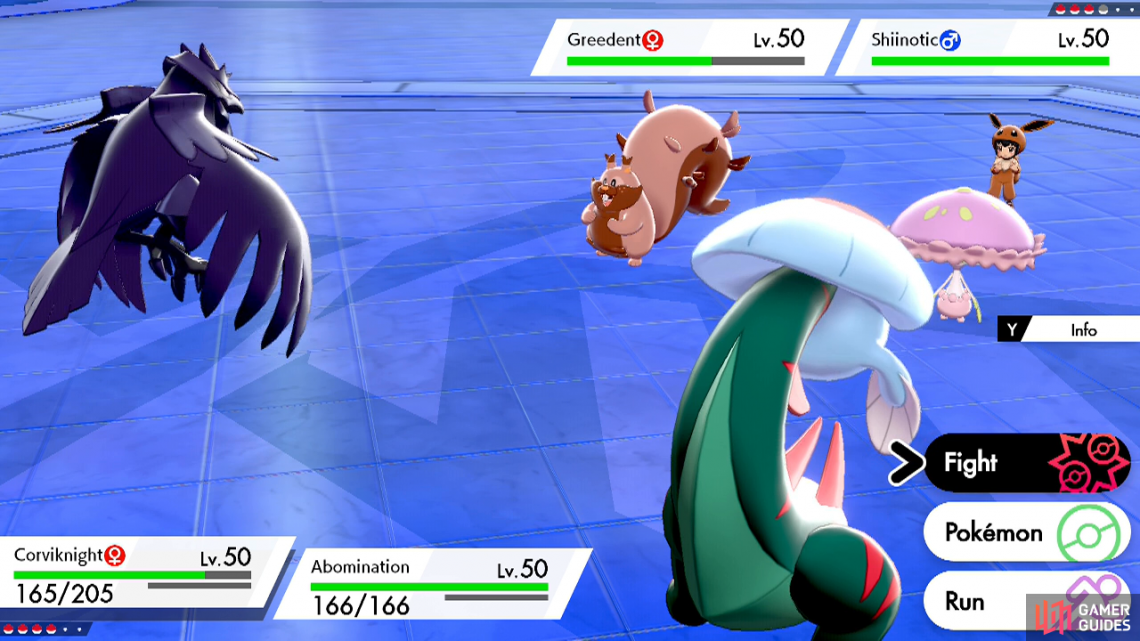 During the main story, you may run into Double Battles on rare occasions. As the name suggests, these battles involve two Pokémon on each side. You’ll pick an action for each of your Pokémon, while your opponent does the same. Otherwise, the flow and mechanics are the same as a regular Single Battle.

Of note, certain moves are capable of hitting multiple targets in Double Battles (as well as Max Raid Battles). Be sure to check the description of your moves! Ones that mention “opposing Pokémon” will hit both of the opponent’s Pokémon. But there are some moves like Earthquake that hit all Pokémon, even your own!

Furthermore, there’s a branch of Double Battles called Multi Battles. Instead of you controlling two Pokémon, you’ll team up with another player–and you’ll both control one Pokémon at a time. Similarly, you’ll be facing off against a team of two opponents. These battles can be fun, but also chaotic if you don’t co-ordinate properly!