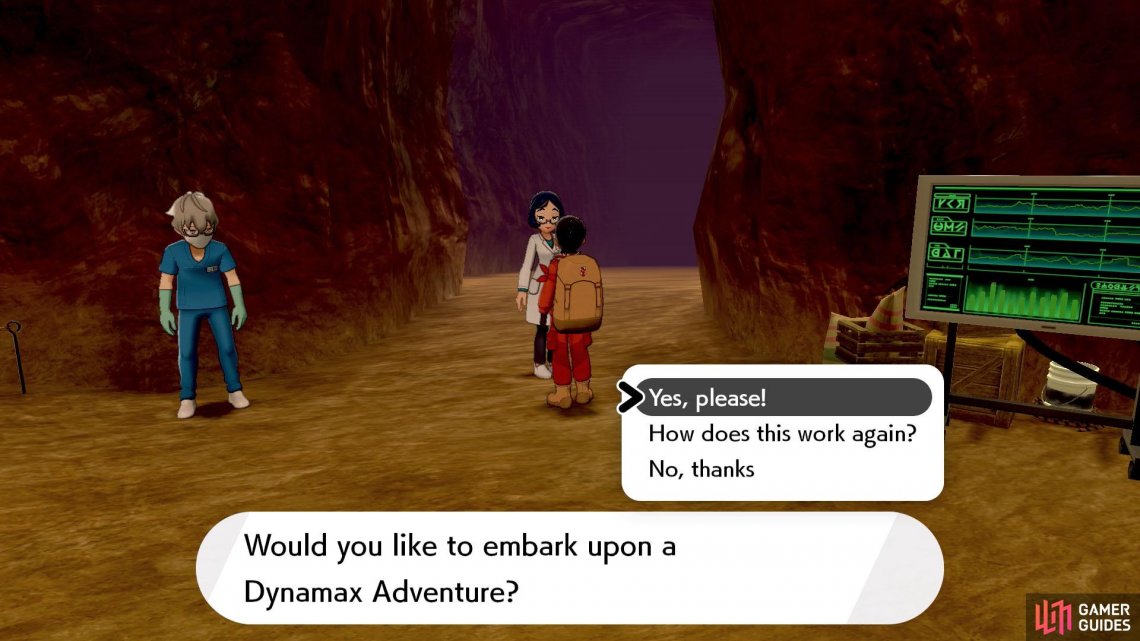 Dynamax Adventures are great for obtaining rare Pokémon and earning Dynite Ore. Shiny-hunters will appreciate the increased Shiny odds too!

Near the very start of the Crown Tundra storyline, one of your missions was to visit the Max Lair and go on a Dynamax Adventure to search for the foolhardy Peony. Afterwards, you can speak to the scientist at the front of the cave entrance to go on more Dynamax Adventures.

To recap, Dynamax Adventure is a new game mode where you can team up with 3 other players (or the AI) to challenge consecutive Max Raid Battles. Unlike usual, you cannot use your own Pokémon. Instead, you’ll choose rental Pokémon that are randomly provided. You’ll also have opportunities to swap your rental Pokémon during an adventure.

We tackle a Dynamax Adventure in Pokémon Sword and Shield's Crown Tundra DLC.

Before starting a Dynamax Adventure, you’ll be prompted to save your game. Go ahead, unless you’ve done something you regret.

Next, you’ll be asked to invite other players or not. This works similarly to inviting players for Max Raid Battles. If you choose to invite, the game will match you with players online or locally, depending on your Y-Comm communication settings.

Likewise, you can press the + button before inviting to input an 8-digit Link Code. Doing so will match you with players using the same link code. When you’re matched with players like this, the first player to use the link code will be the host; everyone else will join as a guest, regardless of whether they were hosting. 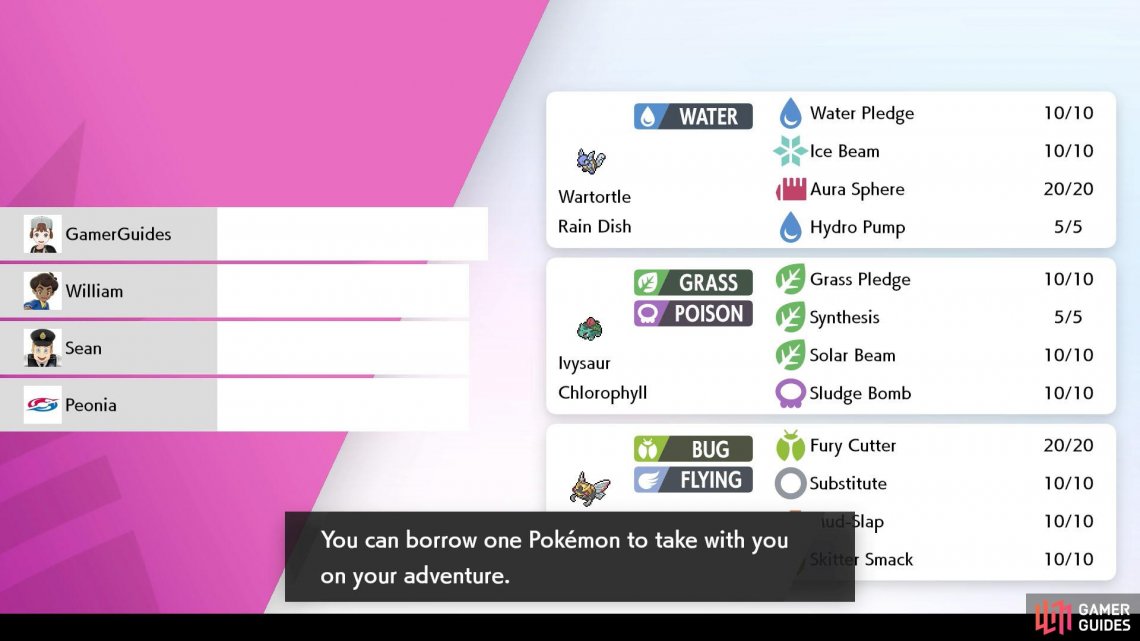 After choosing a Pokémon, a new Pokémon will replace it for subsequent players.

Once everyone is ready, players will take turns to choose from three rental Pokémon (with a time limit of 20 seconds). You can see the Pokémon’s Types, moves and Ability. Pressing the + button will display the Pokémon’s stats. You may find Pokémon here that you probably wouldn’t use normally, such as unevolved Pokémon.

Please check this page for a full list of rental Pokémon.

Don’t be Afraid to Play Support!

Choosing a good rental can be difficult since, depending on who you’re playing with, it can be an absolute free-for-all. Plus you won’t know every Pokémon you’ll encounter. That said, you generally won’t go wrong with a support-based Pokémon.

This will be a Pokémon with moves that assist allies like Heal Pulse, Life Dew or Pollen Puff. Such Pokémon include Chansey, Clefairy and Ribombee. You only get a limited number of lives, so preventing teammates from fainting is very useful. 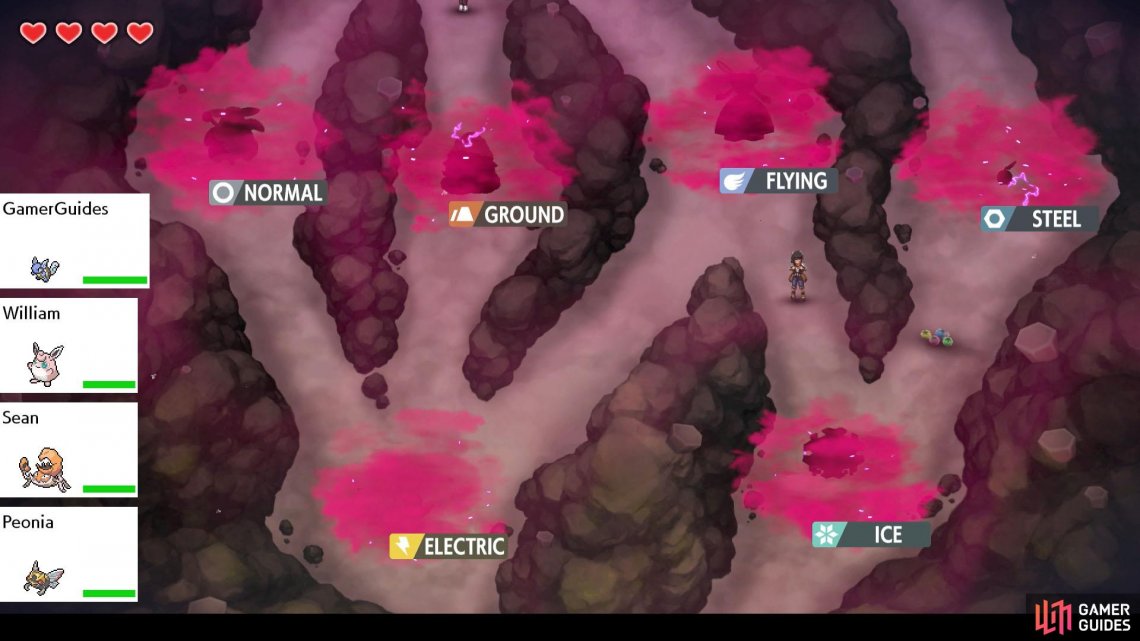 (1 of 2) You’ll always begin with a choice of two paths at the start. Then the paths will split up for a bit. 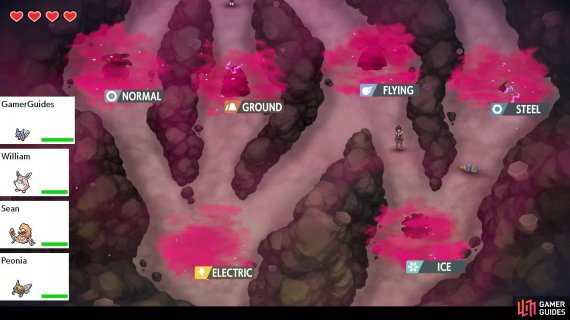 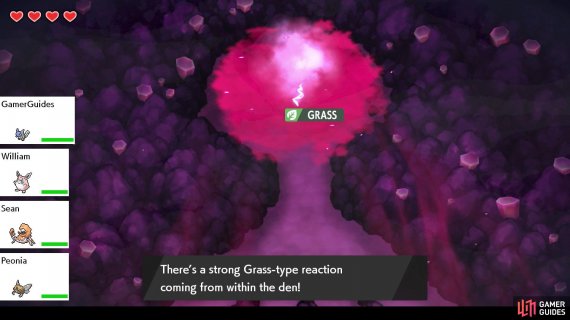 You’ll always begin with a choice of two paths at the start. Then the paths will split up for a bit. (left), At the end, the paths will all converge towards the Legendary. (right)

Your group will start at the bottom of the map; your task is to travel upwards, to where the Legendary Pokémon resides. Ahead, there will be multiple branching paths. Each path leads to a different Pokémon. In total, you’ll fight up to 4 Pokémon (including the Legendary). The Pokémon are obscured by a dark fog, but the game will display one of their Types.

Be cautious because many Pokémon have two Types. For example, there’s a Water-type so you might think you’ll win with an Electric-type. Then it turns out to be a Water/Ground Seismitoad. Besides the Legendary who’s fully covered by fog, it’s possible to guess the Pokémon behind the fog if they have a big and/or distinctive silhouette.

If you want to study the Dynamax Pokémon that you’ll fight, please refer to the lists of Adventure Pokémon and Legendary Pokémon.

Each time you approach a branch in the path, you’ll have 20 seconds to cast a vote for which path to follow. When the time’s up, you’ll all automatically travel along the path with the most votes. Since you can’t go backwards, choosing a path may prevent you from choosing certain path(s) later on. If you need to check the paths further up, you can scroll the map using the right analogue stick.

Along certain paths, there may be NPCs or berries before or after a Dynamax Pokémon. If you bump into one of these, you can receive a perk. Backpackers will offer you a selection of hold items. If you have an unevolved Pokémon, keep an eye out for an Eviolite.

Meanwhile, Scientists will let your group choose a random rental Pokémon. However, only one player can receive it. This is worth a gamble if your Pokémon has low HP or is bad against upcoming opponents. Berries will automatically heal your team (and do nothing if they’re all at full HP). 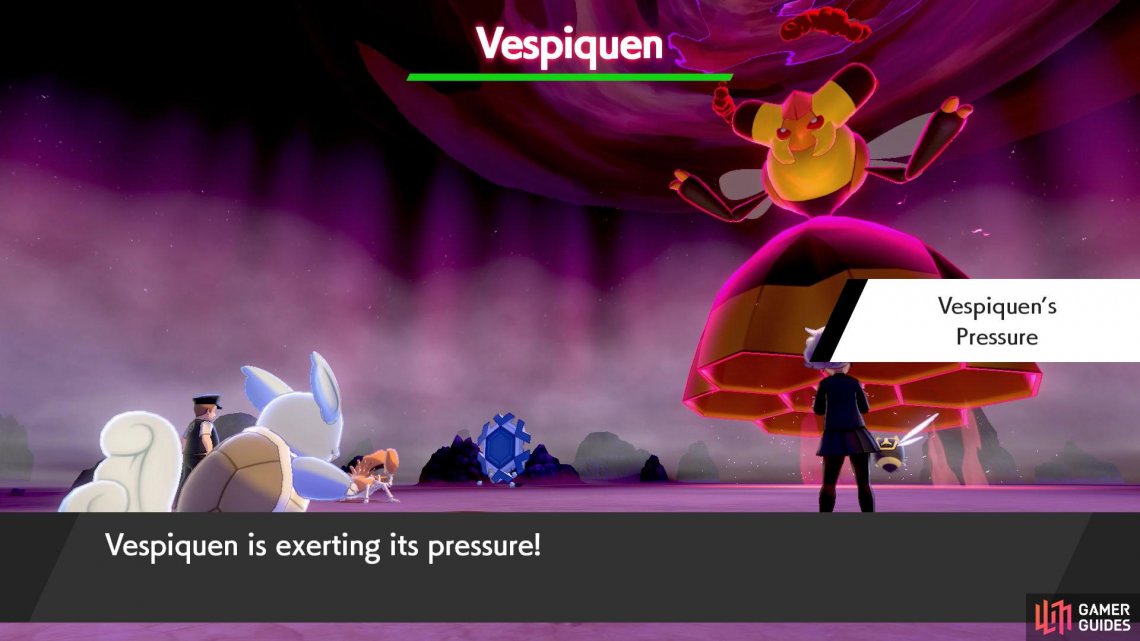 Since you have to fight 4 Pokémon, your strategies can differ compared to regular Max Raid Batles. For instance, Pressure is actually a threat.

When you encounter a Dynamax Pokémon, the rules of battle are essentially the same as Max Raid Battles. To summarise, you must work together to defeat a Pokémon that’s permanently Dynamaxed.

Each turn, a player will have the chance to Dynamax their own Pokémon for 3 turns. On turn 1, player 1 can Dynamax and so forth. Your team can only fit one Dynamax Pokémon. So if player 1 Dynamaxes, players 2 and 3 will have to wait until later. The order which players can Dynamax is preserved between fights. So if it was player 2’s turn to Dynamax at the end of the last fight, player 3 can Dynamax first in the next fight.

Unlike regular Max Raid Battles, the opponent will never create any shields. This means that individual battles should be quicker than usual, as you don’t need to waste turns weakening the shield. Also, you can freely inflict status ailments or lower the stats of your opponent. But keep in mind that it can neutralize these effects occasionally.

Crucially, your entire team will have 4 lives throughout the entire adventure. These lives will be lost when any team member’s Pokémon faints. After a Pokémon faints, its owner can “cheer” for one turn, for a chance to provide a random buff. On the next turn, their Pokémon will return with full HP.

The battles will proceed until you’ve exhausted the opponent’s HP. If you win, you can choose to catch the Pokémon or not. In Dynamax Adventures, you have a guaranteed catch rate, regardless of Pokémon or Poké Ball thrown. However, if you lose all 4 lives or an individual battle exceeds 10 turns, the adventure will end prematurely.

Your Pokémon’s HP will carry on to the next battle; they won’t be healed between fights. This is where having Pokémon with healing moves comes in very handy. Another way to restore HP is by bumping into berries along a path. Also, if you swap your Pokémon with a new one, they will have full health. 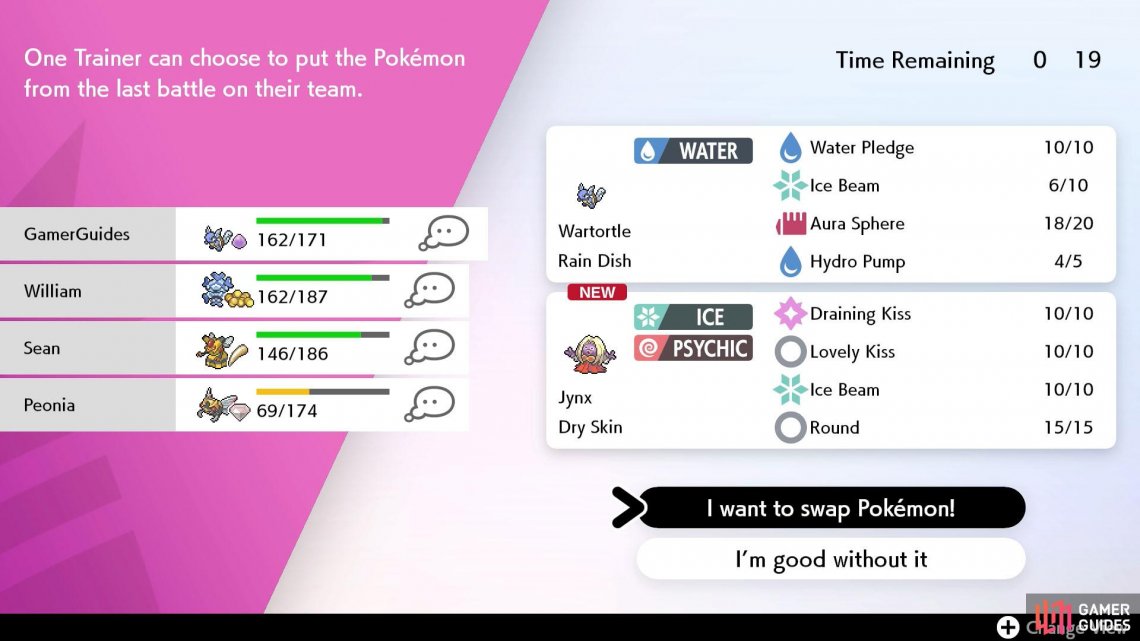 Try to be nice to other players who have low HP. Besides, if their Pokémon faints, it’s bad for you as well. (If playing with AI, don’t rely on them to make good choices.)

Similar to past games, you can only catch each Legendary Pokémon once. So if you encounter the same Pokémon later on (for example, when playing online), you can’t catch a second one. Now if you catch the Legendary, but don’t keep it, you’ll be able to catch it again later.

A nice bonus is that the Pokémon you catch here have a 1/300 chance of being shiny. Or 1/100 if you own the Shiny Charm. Note that Shiny Pokémon are determined at the end of an adventure, not when you encounter them in battle (or use them as rentals).

Shiny-hunters, don’t reset the game if the Legendary Pokémon isn’t shiny during the fight! Now, if a Legendary isn’t shiny at the end, don’t fret either. Just pick a different Pokémon or no Pokémon to keep. Afterwards, you can encounter the Legendary again.

Next, you’ll be awarded Dynite Ore depending on your progress and performance in the adventure. You can spend this ore by speaking to the backpacker towards the right, in the Max Lair lobby.

Finally, your game will automatically be saved.

If you close the game before saving, the scientist will scold you when you speak to her again. Do this 3 times and you won’t be able to start a Dynamax Adventure until you pay 3 Dynite Ore. This penalty will keep increasing, until you complete a adventure.

One reason to reset before saving is when you’re shiny-hunting a particular Legendary and want to catch it with a rare ball (eg. Moon Ball). To avoid this penalty, always aim to finish one adventure after every two resets. 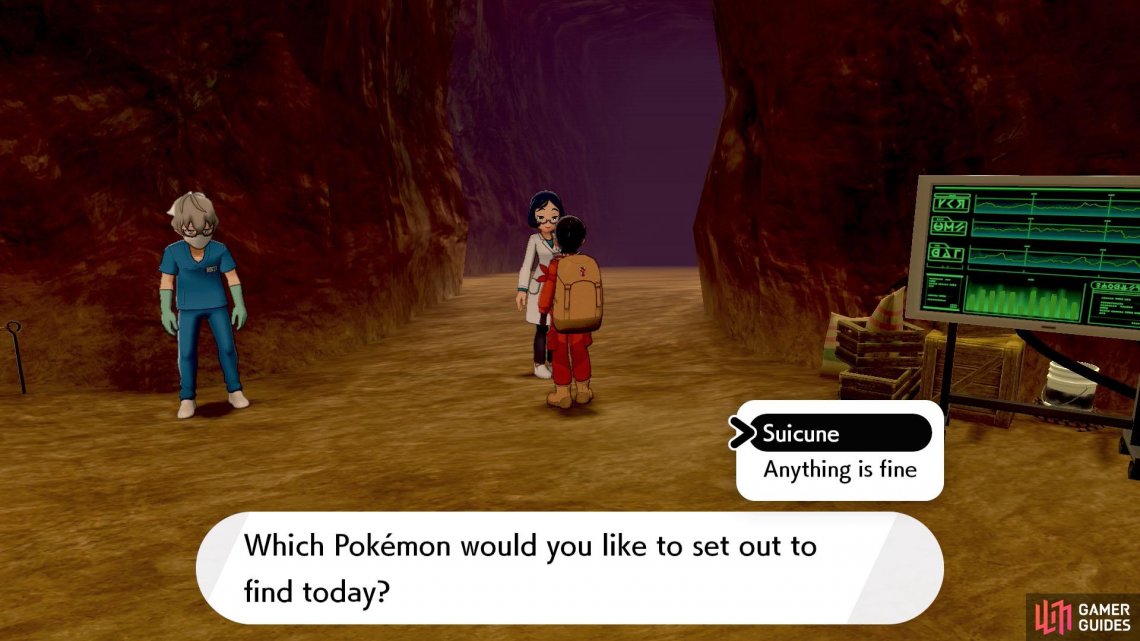 It’s no big deal if you lose to a Legendary. You can always try again!

For those of you who reached the Legendary but were either defeated by it or chose not to capture/keep the Legendary, the scientist at the front will offer to save a path to the Legendary. The next time you begin an adventure, you can choose this path, which will guarantee that Legendary’s appearance at the end.

Up to 3 Legendary paths can be saved at one time. If you get a new path, you’ll asked if you want to overwrite an existing path. You can also receive random path suggestions if you speak to Peonia after each adventure. She’ll request 5 Dynite Ore to add the suggested path to your list. So remember to say “hi”!

If you’ve caught a particular Legendary Pokémon and want to re-challenge it, there’s a hidden trick you can use. Place the Legendary at the front of your party and do any Dynamax Adventure. Afterwards, speak to Peonia and she’ll offer the path to that Legendary.

Since you’ve already caught the Legendary, you can’t catch it a second time. However, this can be useful for sharing a path with a friend, for instance. Note that this trick only works with Pokémon you’ve caught yourself (and in the same game).