This content is only available after purchasing the Expansion Pass for your game and updating to Version 1.3.0 or higher. 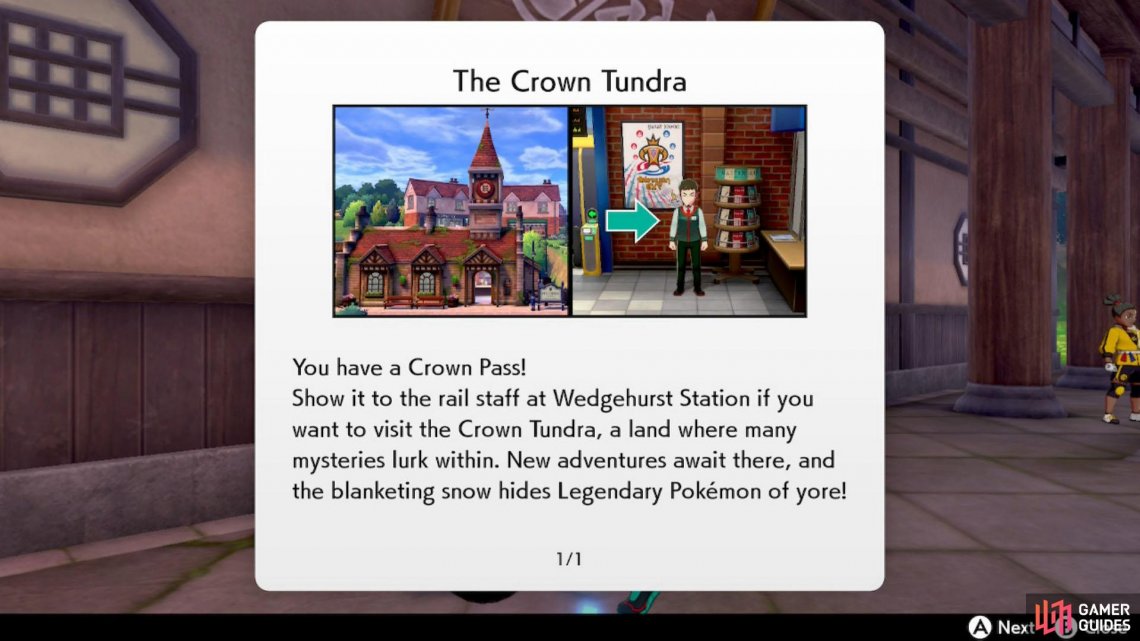 With this ticket, you explore the second and final DLC area.

When you enter the game world with the latest version update installed, you’ll immediately be greeted with a pop-up window. It’ll inform you that the Crown Tundra can be accessed via the Wedgehurst train station, just like the Isle of Armor. Similarly, a Crown Pass will appear out of nowhere (don’t ask how it got there).

Best Time for an Expedition?

We recommend exploring the Crown Tundra once you’ve beaten the game or at least after you’ve obtained 8 badges. Unlike the Isle of Armor, all the Pokémon you encounter will be at postgame levels (60 and higher) regardless of your progress in the main story.

Now, it is possible to enter the Crown Tundra with no badges. You’ll have to fight a trainer with Level 70 Pokémon, but you can simply lose the battle and continue. However, you can’t catch any wild Pokémon. That said, you can catch Pokémon from Dynamax Adventures.

As soon as you’ve made the necessary preparations (at the very least, you’ll want your party to be healthy), head for good ol’ Wedgehurst train station. If you’ve forgotten, it’s located near the southern entrance of the first town in the game. Obviously, if you’re faraway, use the flying taxi if you can.

Chat to the station staff standing by the ticket gates and he’ll notice your Crown Pass. Without further ado, select “Crown Tundra Station” as your destination. You’ll ride the train to the southernmost part of Galar, which–considering Galar is an upside down United Kingdom–would be equivalent to Scotland in the real world.

When you arrive at Crown Tundra Station, another female scientist will greet you. Noticing you’re a new face, she’ll kindly upgrade your Pokédex to add the Crown Tundra Pokédex. This will let you record info on the 210 native Pokémon found here, including around 100 returning Pokémon that are new to Sword and Shield!

Should you have the Mythical Pokémon Meltan or Melmetal in your game, the same scientist will give you a rare Hex Nut Cap clothing item. At the time of writing, you can obtain these two Pokémon by transferring from Pokémon Go to Pokémon Let’s Go Pikachu/Eevee and finally Pokémon Home (then to Sword/Shield obviously).

Before leaving the station, feel free to stock up on items such as Poké Balls and Potions from the man at the kiosk. A large portion of the Crown Tundra involves running around all over the place catching Legendary Pokémon. So you’ll want to have enough supplies, lest you run out at a crucial moment! 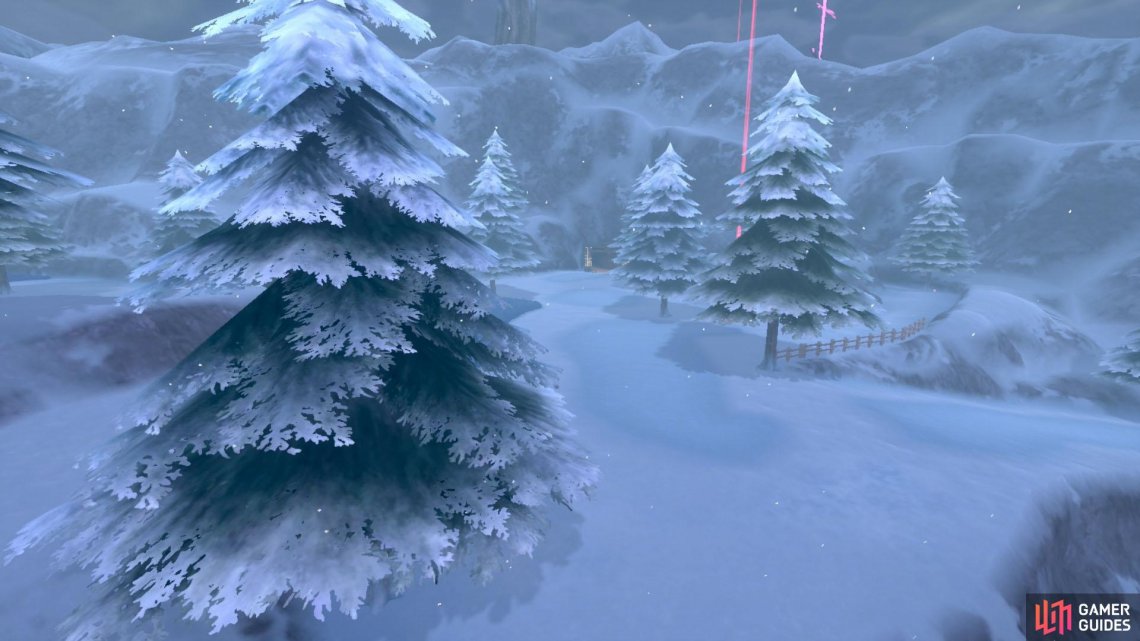 Make sure you’re wearing something warm and cozy before setting off!

Outside, you’ll gaze at the magnificent snowy landscape that is the Crown Tundra, before being interrupted by a loud pair of voices. Pluck up the courage and approach the two standing next to the open gap in the fence; you won’t be able to proceed otherwise. Agree to help out and you’ll be forced into a Pokémon battle. 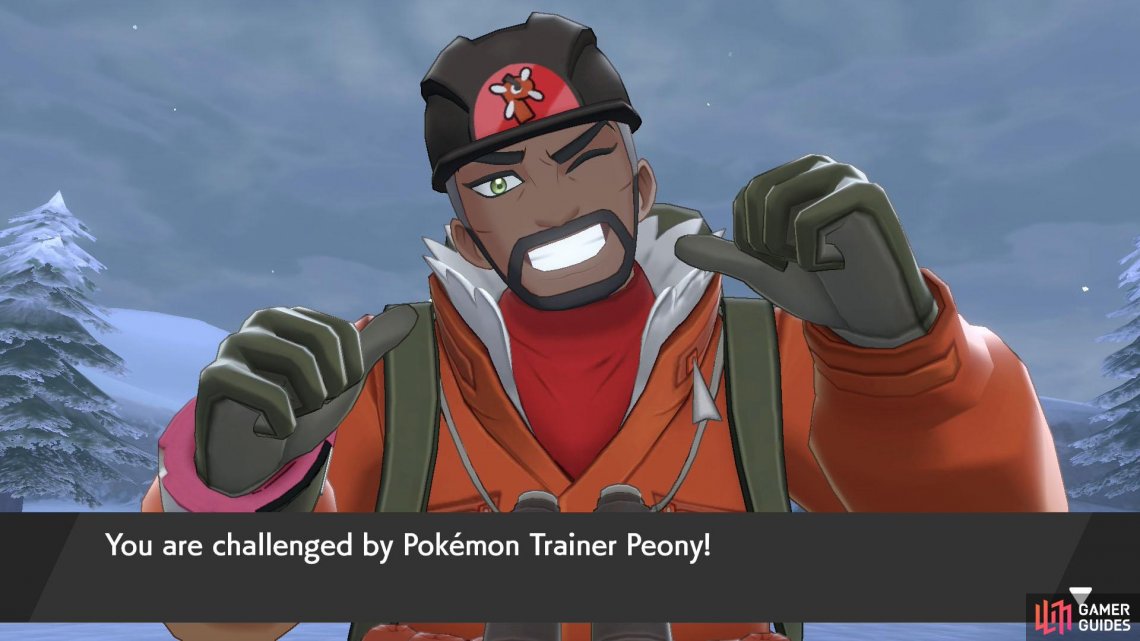 This is the one and only trainer battle in the whole Crown Tundra. Depending on when you arrive here, this can be a pretty simple fight–or it can be an impossible one. Regardless, it doesn’t matter if you win or lose.

Peony’s first creature is Copperajah, an evolved Cufant. It’s a pure Steel-type, so smack it with Fire, Ground or Fighting moves. It’s carrying High Horsepower, so Fire-types will need to be careful, unless they’re not touching the ground.

His next and last Pokémon is Aggron, a fully evolved Aron. It packs a double weakness to Ground and Fighting, so use moves of those types if you can. Water moves are also good. Be wary of its Sturdy ability, which lets it survive a one-hit KO.

After the fight, Peony will run off towards the Max Lair in the distance, to chase after his daughter. You can follow him if you want–doing so will unlock Dynamax Adventures and progress the story. Or you can explore the Crown Tundra to your heart’s content. We recommend following him.

Naturally, lots of chilly Pokémon have made their homes in this initial area of the tundra. Surprisingly, you can find wild Amaura, which is an extinct Pokémon from the Kalos region.

Other highlights include the hypnotising Jynx and, during snowy conditions, the crystal-like Cryogonal. Black/White players may also be glad to see Audino–the experience yielding punch bag–again.