This content is only available after purchasing the Expansion Pass for your game and updating to at least Version 1.2.0. 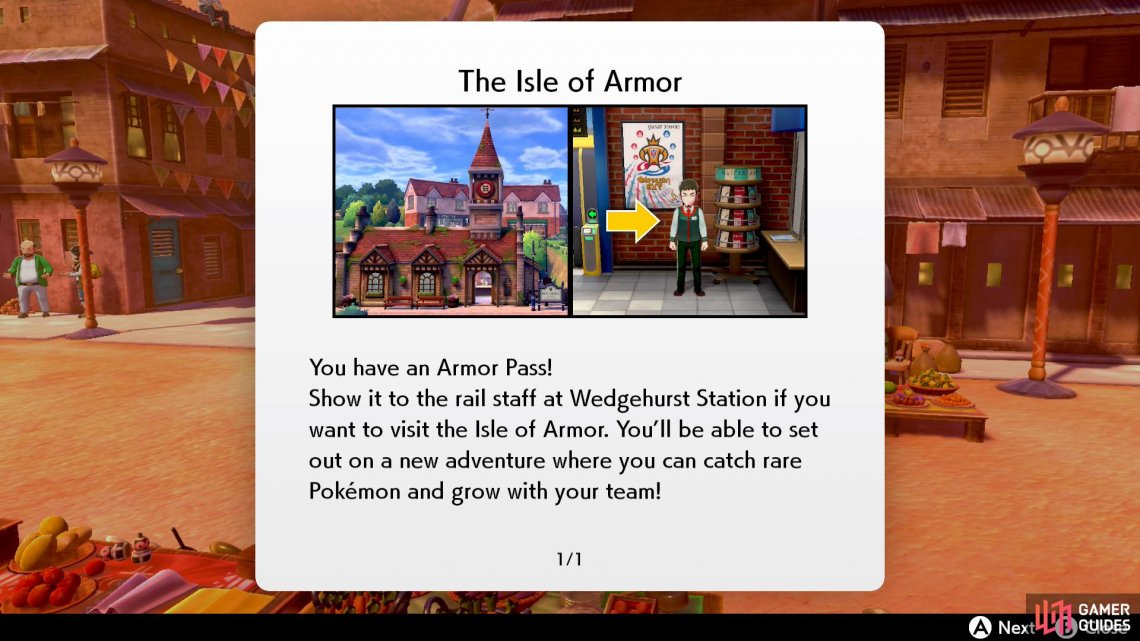 The Armor Pass is your ticket to new areas. Make sure not to lose it!

After buying the Expansion Pass, you should receive a pop up window when you load into the game world. It’ll tell you that the Isle of Armor is now accessible via the Wedgehurst train station, near the beginning of the game. You’ll also magically receive the Armor Pass. Now you can travel to the Isle of Armor whenever you want.

Best Time for a Vacation?

The Pokémon you encounter on the isle are all fairly low Level, because anyone can visit the isle, even if they have no badges. Once you’re the Champ, all of the Pokémon will be higher Level to compensate. There is no in-between.

As such, it doesn’t really matter at which point in the game you tackle the Isle of Armor. However, you’ll probably have a more fun time the earlier you are in the game OR soon after you’ve defeated the Champion.

Once you’re ready to set off, make a beeline for Wedgehurst train station–it’s near the southern entrance, if you use the flying taxi (or you’re still at the start of the game). Otherwise, if you’ve gone past Wedgehurst and don’t have the taxi yet, you should head to any other train station and choose “Wedgehurst Station” as your stop.

Upon arrival, speak to the male station staff to the right of the ticket gates. He’ll spot your Armor Pass and allow you to board a super-special train to Armor Station. By the way, if you haven’t returned to this train station for a while, you may need to deal with a wandering Slowpoke first (refer to Prelude to the Isle of Armor).

Before you can go anywhere, you’ll be stopped by a female researcher. She’s the helpful sort, offering to upgrade your Pokédex to add the Isle of Armor Pokédex. This lets you keep track of the native Pokémon here, which includes around 100 Pokémon from previous games that weren’t available in Sword and Shield.

Completing the Isle of Armor Pokédex

If you need help filling in your Pokédex, please check out our dedicated Pokédex section! For more info about the completion rewards, please refer to Other Activities.

Next, start to head for the exit of the train station, just over in the opposite corner. There will be a bloke standing in the way, pondering his life decisions. He’ll run off at the first sign of trouble, causing you to be mistaken by Klara or Avery, depending on your game version, for a new member of their training dojo. 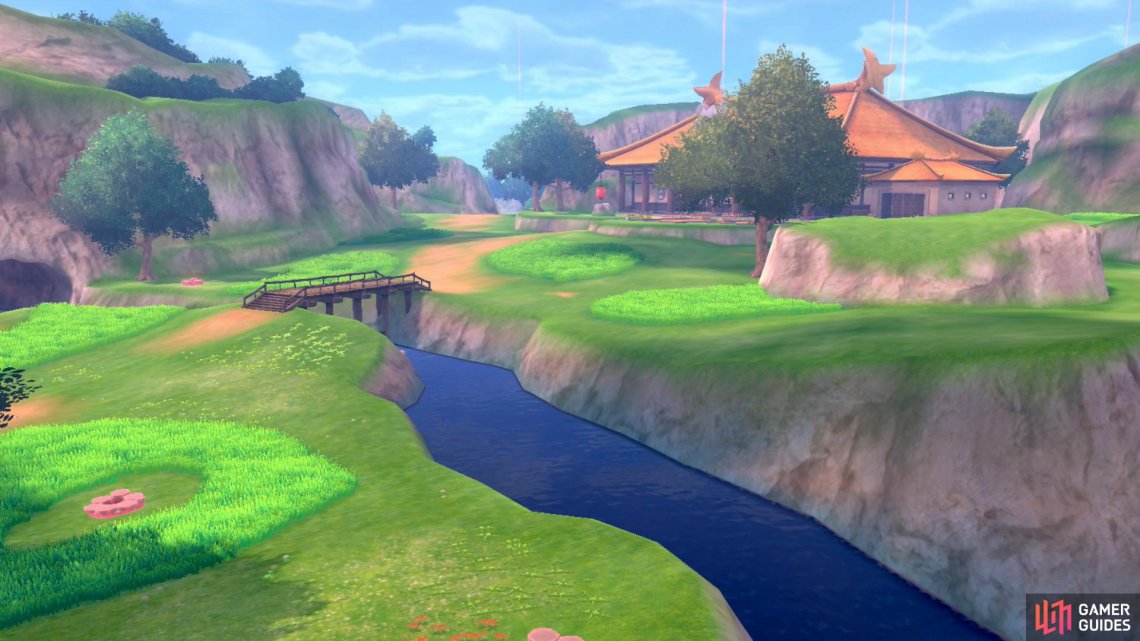 The Fields of Honor is divided into two halves, separated by a river. The Master Dojo awaits on the other side.

Upon stepping outside the train station, you’ll witness the new landscape that is the Isle of Armor. Bet you can’t wait to go exploring! But first, Klara or Avery will challenge you to a battle, as promised. 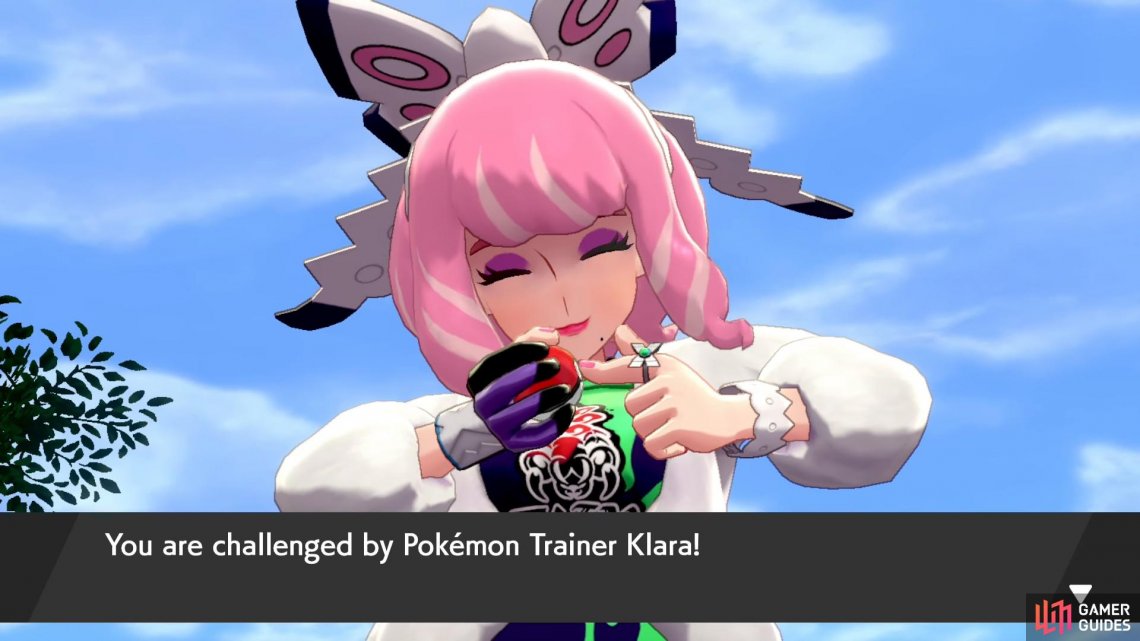 This should be an easy fight no matter where you are in the game. Both of her Pokémon are unevolved and only know weak moves. For Venipede, Fire, Flying, Rock or Psychic-types are recommended. Otherwise, hit it with your best moves, so long as they’re not Grass or something. 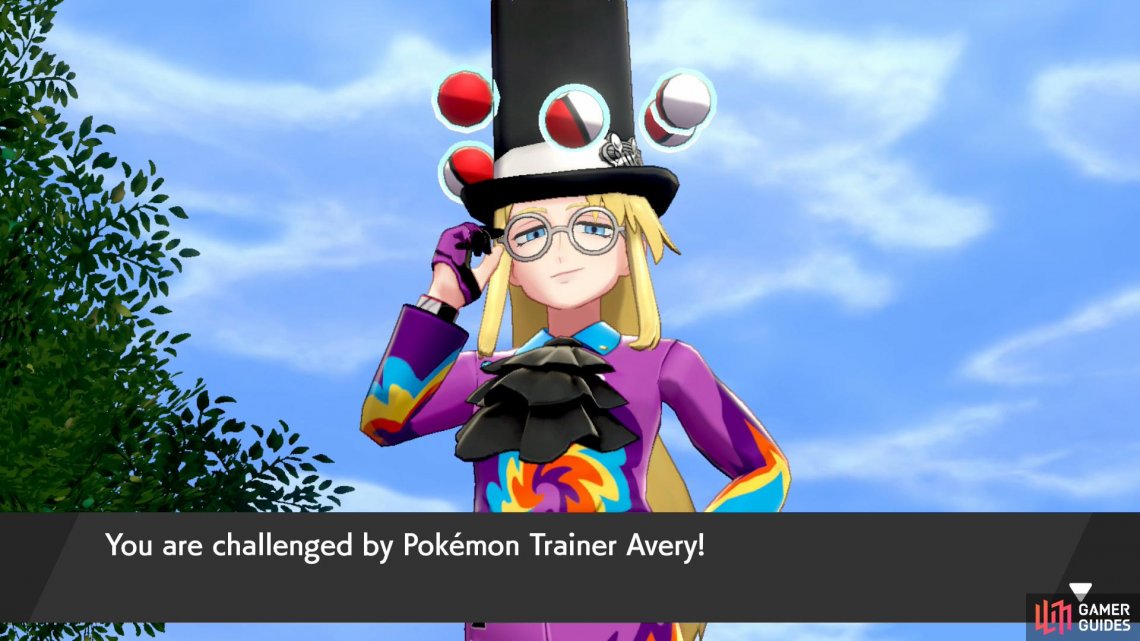 Like Klara, this should be an easy peasy fight. Avery is clearly a Psychic-type fan. Therefore, you’ll have an easier time with super-effective Bug, Ghost or Dark-types. Or you can simply rely on your favourite heavy-lifters.

After defeating Klara/Avery, they’ll foist a Style Card on you before leaving. Now you’re free to roam the Isle of Armor! Although you can go anywhere, it’s probably a smart idea to go visit the Master Dojo first. As your new acquaintance helpfully(?) pointed out, the dojo is just around the corner.

This snazzy piece of plastic will increase the options available to you in the many hair salons and boutiques throughout the Galar mainland. For female trainers, this includes the possibility of cosplaying as Marnie… Might be a good time to fly back to all the boutiques!

The Isle of Armor is one big Wild Area; that means you can explore areas how you want and in pretty much any order you want. Those of you with an adventurous spirit are sure to have fun, going wherever your heart takes you.

Due to the open-ended nature of the Wild Area, we won’t be telling you exactly where to go and what to do. Because that would be boring. However, we will take you through all the compulsory parts and provide helpful signposts.

From the train station, if you turn right a bit, you should see a stretch of land in front of you. Along the left, there’s a large tree and a bunch of tall grass next to the cliffs; along the right, there’s a sandy shoreline. As you’ve probably figured out, you’ll reach the Master Dojo if you head in this direction.

After you’ve gone past the first bunch of tall grass, there will be a visible path between the rest of the tall grass and the shoreline. By this point, you should be able to see the Master Dojo in the distance as well. Following this path is the quickest way forward. But feel free to explore the side paths, to catch new Pokémon etc. 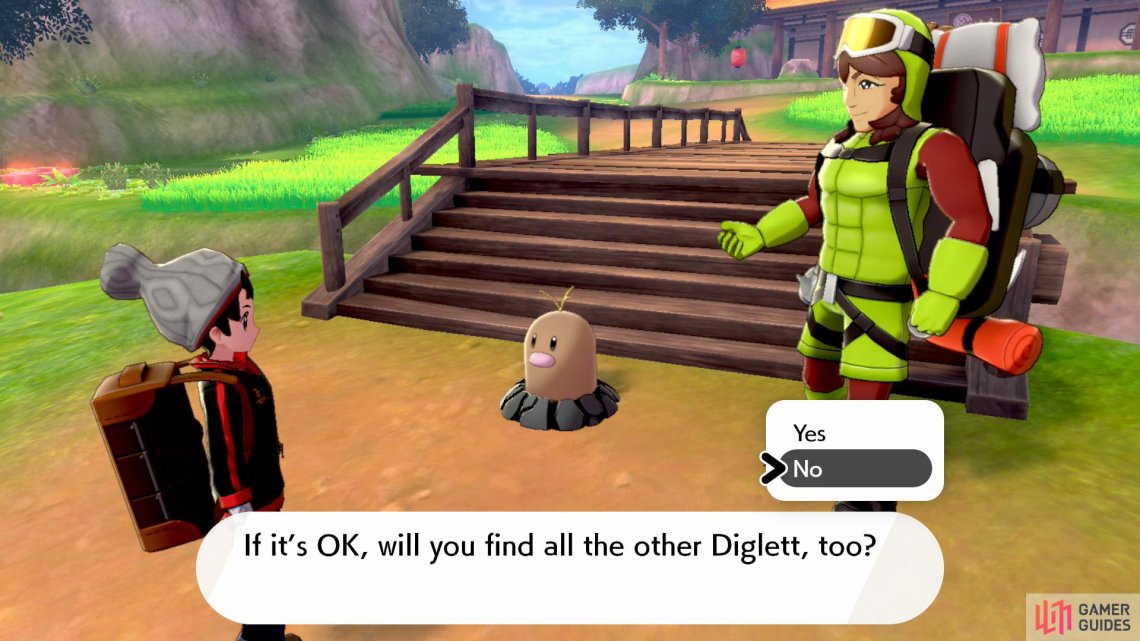 Sadly, choosing “No” isn’t an option.

Halfway along, you’ll go past two rocky hills; the land will start to elevate, leading towards a bridge spanning a small river. In front of the bridge is a dubious little thing–an Alolan Diglett. Approach it and pick the first option. Its owner will arrive and share his predicament with you: the fool has somehow lost 150 of his Alolan Diglett. How…?

Did you “enjoy” searching for the Zygarde Cells or Totem Stickers in Sun/Moon and Ultra Sun/Ultra Moon? This is essentially the same thing–a scavenger hunt, but limited to the Isle of Armor. By rescuing the cleverly hidden Diglett, you can receive Alolan and non-Galarian Pokémon as gifts.

Once you’ve reluctantly agreed to help the Diglett trainer, head across the bridge, then go left towards the entrance of the Master Dojo. As you reach the door, you should spot Klara/Avery chatting to a new person. You’ll learn that she’s Honey, the matron of the Master Dojo, and you’ll be invited inside.

Head into the dojo if you’re in a hurry. Otherwise, go left from the dojo entrance, following the dojo’s wall. At the corner of the dojo, below a box, there’s an Expert Belt for the taking. Next, travel in the opposite direction. Keep going until you reach the other side of the dojo. If you focus on this corner, you can obtain TR64 Focus Blast.

Finally, continue to the end of this small plateau. You’ll go past some tall grass on your left. At the far end, there’s a tree and a Pokémon den. Next to the tree is a bottle of HP Up that nobody wants. Now return to the dojo entrance and step inside, before the others think you’re keeping them waiting!

There are lots of new (old) Pokémon found in this first area. The likes of Jigglypuff, Buneary, Abra and Klefki live among the tall grass. Meanwhile, there are lots of Galarian Slowpoke and evolved water-type Pokémon hanging around by the sea.

Depending on the weather, you may find a lonely Rockruff in the middle of the road, near the train station side. Plus a Comfey in front of one of the rocky hills a bit further up the path. Finally, look for a Lopunny when you go right from the bridge.

You’ll be formally introduced to the dojo family, which includes Mustard, Honey’s husband and owner of the dojo, as well as Hyde, their son. Hyde will also gift you an Exp. Charm, which boosts the experience points you earn. Once the introductions are out of the way, Mustard will request a battle of you. 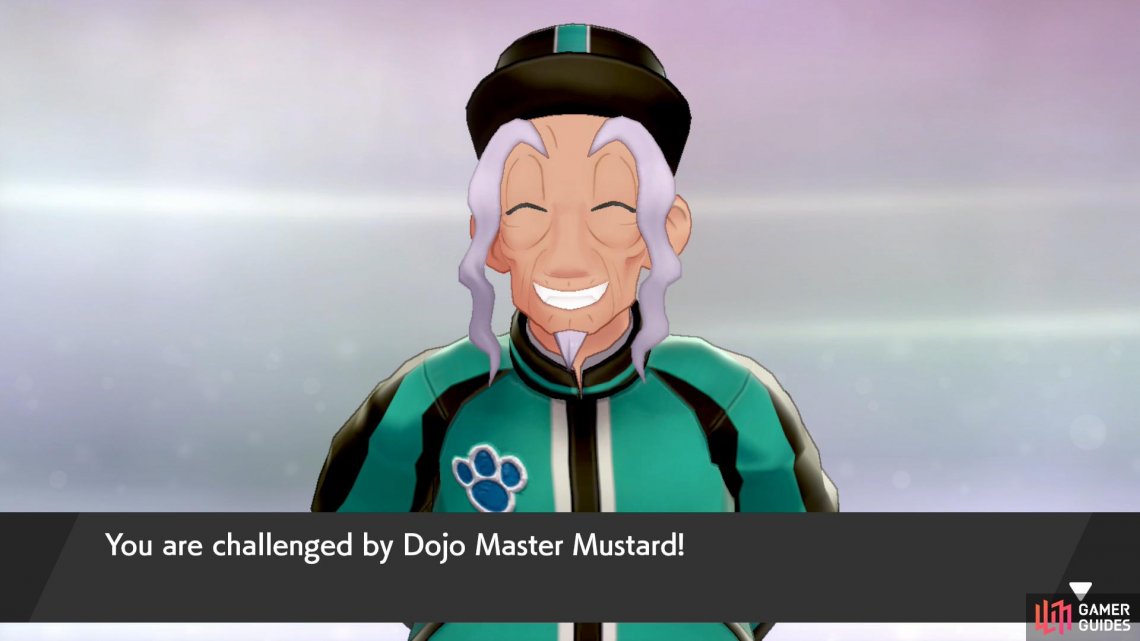 A pretty simple fight, to get your warmed up. Mienfoo can surprise you with Fake Out, which causes a flinch on the first turn only. This can be avoided with a Ghost-type etc., but chances are, it’ll barely phase you. If Mienfoo somehow survives the next turn, it may use U-Turn to pivot out.

To congratulate your victory, Mustard will hand you a Dojo Uniform. You’ll put this on straightaway. But don’t worry if you’re not a fan of it, because it’s not compulsory uniform–and you’ll soon be given the option to change out of it. Next, you’ll be directed to the rest room on the right, where you can heal your party or change your outfit.

Now that you’ve joined the dojo, Mustard announces that there will be three trials for all of his students. The first trial is to chase after a trio of absurdly fast Slowpoke. Are we dreaming? Before leaving the dojo, go right, past the rest room. You’ll find Hyde tinkering with a machine. Inspect the machine and give Hyde 500 Watts to boot it up.

This high-tech machine allows you to recycle 4 unwanted items to create a completely different item. There are all sorts of combinations, so feel free to give it a try if you have lots of junk lying spare.

Of note, for ball-loving fans, this is one of the few ways to obtain more Apricorn balls (eg. Love Ball), by combining the coloured Apricorns found by shaking certain berry trees. For more details, including recipes please see our Cram-o-matic Guide!

Exit the dojo once you’ve finished all your business there. Outside, the Slowpoke trio will dash off towards the north, to an area called the Soothing Wetlands. Without further ado, take a right from the Master Dojo, to chase after those speedy buggers.

Along the way, you’ll bump into a lady who offers to customise your bike if you have one (and it can travel across water). You can choose from two new designs: “Sparkling White” and “Glistening Black”. As an added bonus, she’ll also upgrade your charge speed to max, if it wasn’t already. So sorry if you paid Watts to do it earlier…