The next day, Pam wants you to check inside her storage room again; apparently she’s been hearing more funny sounds coming from inside.

Well, there is another world beyond her storage room, so you’d better check it to be safe.

The culprit this time isn’t Dogu, but rather Peachy the Fluffkin. Seems like something serious has happened to Origin Island; you’re not going to find out anything just standing there, so head on through the door!

Go to the Ancient Tower

We’re pretty sure something looks different about Origin Island… Worse still, Stone Giants are on the rampage. Could this be related to the "Ancient Disaster" everybody was so frightened of?

The only way to find out is to reach the Ancient Tower , directly north of the Central Grasslands.

Just before the entrance to the Ancient Tower, Leo and his patrol are trying to defeat a pair of Stone Giants. If you want, you can go lend a hand.

Even if you’re Level 50 or higher, be careful as these guys pack a punch. The easiest way to deal with them is with ranged attacks or using your shield as a Paladin. Tough luck if you’re a Mercenary or in a non-combat Life.

After grinding the Stone Giants to dust, Leo and Yuelia will join your party to rescue Grace, who’s somewhere in the tower. Continue north to the doors of the giant, foreboding tower.

Head to the top of the tower

Inside the tower, you’ll be told to enter the magic circle in the centre to head to the next floor of the tower. This next part is going to be slightly tricky, as you need to climb multiple floors inhabited by tough-as-nuts enemies.

Before continuing, change to a combat Life if you haven’t done so already and bring a lot of HP and SP potions. 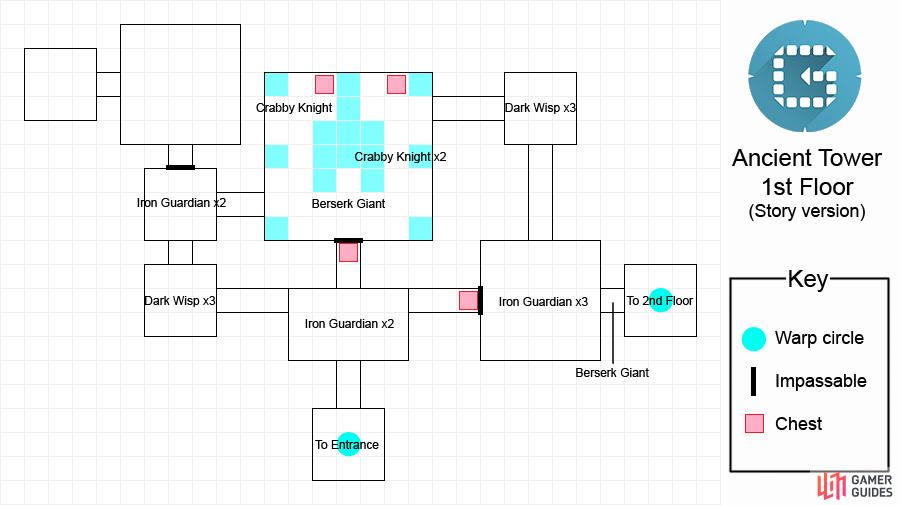 On the first floor, you’ll soon find out just how strong the enemies within are. Even with Yuelia and Leo, it’ll likely take a long time to topple the two Iron Guardians, while at the same time you’re liable to receive heavy damage.

At this stage, don’t feel obliged to clear the road ahead; it’s completely fine to run past the enemies. Later on, you can come back with better stats and gear to properly take them on.

Either way, you can find treasure chests (containing random items) in the branches to the north and east; to continue, head for the west branch.

The next room has three Dark Wisps, nasty buggers who cast dark magic to attack. If you have low Magic Defence, watch your HP because it’ll probably drop fast. Fortunately, they’re a bit less durable than the Iron Guardians.

Speaking of which, up ahead are two more Iron Guardians, although they’re asleep for some bizarre reason.

East from here is the biggest room so far, with two chests, three Crabby Knights and a familiar Berserk Giant. Despite their small stature, the Crabby Knights can cause some heavy damage if you’re careless.

Further east is another small room with three Dark Wisps, then south from here is a large room with not two, but three Iron Guardians. Unless you’re feeling macho, head east, sneaking past the Berserk Giant if possible, to find a warp circle to the next floor.

No map is required for this simple outdoor area; all you have to do is head west along the outer ring of the tower to reach the warp circle to the next floor.

Along the way, prise open any treasure chests if need be and cut down any Angelic Bunnies or Elder Horns if you’re feeling particularly blood-thirsty. 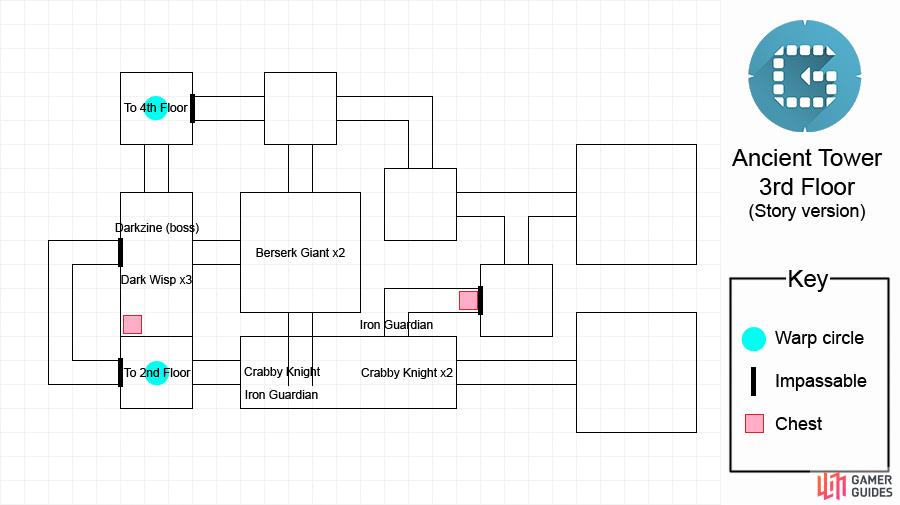 From the warp circle, make your way east to be onset by a Crabby Knight and nearby Iron Guardian. Once you’ve dealt with (or ran past) them, ascend the stairway going north.

Ahead is a large room with a pair of Berserk Giants… shudder . West of here is a tall room with a Darkzine accompanied by a few Dark Wisps.

The Darkzine is basically a giant Dark Wisp. If you’re confident in your abilities, give it a good pounding; otherwise save your battle strength and run north to the next warp circle.