From here on out the DLC becomes a bit of a gauntlet. Very little brains, very lots of shooting.

That said, if you're in a rush, we'll take the time to point out the necessary conflicts. Most enemies can be run past but when you get to the Nafarious Battlement you will be forced to engage with the enemies here until the door opens. The same with the Hall of Hyperion. 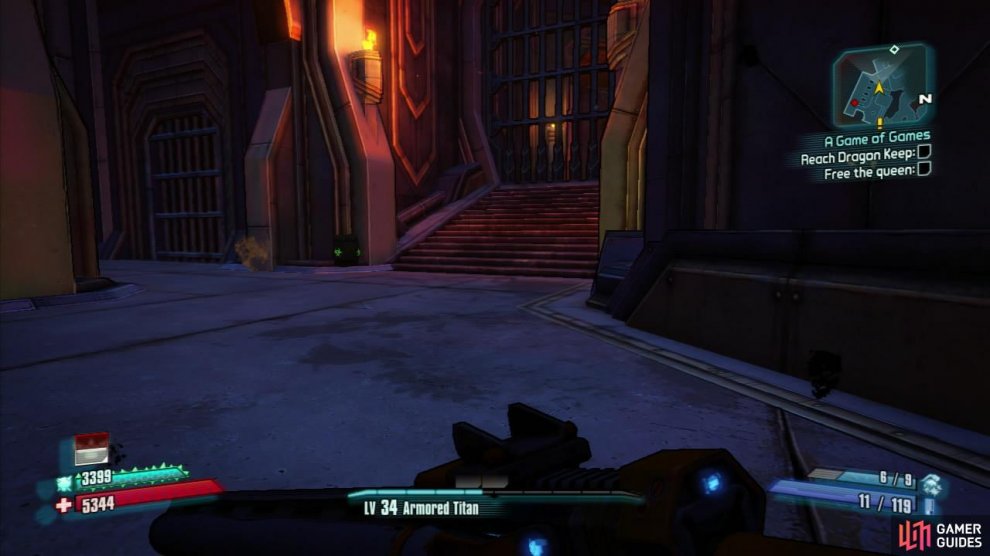 In these areas you will meet Wizards. While they aren't quite the key assassination target that the Witch Doctors were in the Hammerlock DLC, they are nonetheless quite powerful foes that you should try and eradicate before they catch you off guard with a powerful spell. Try and bring a variety of weapons with you as wizards can boast a number of elemental allegiances, and you don't want to and them resisting your attacks.

After this blood bath you'll come to a bridge where you'll fight...

This dragon is a pain. It flies high, launches huge attacks and just generally irritates. Try and fight it from one of the sides of the bridge, its attacks appear less frequent if you stand near-ish the entrance to the bridge. If you do find your health taking a hit then try standing within Roland's turret, or tapping the health regen stones that run along the sides of the bridge. Otherwise just use a solid ranged weapon to deal constant damage to the dragon.

Grab that loot, run forward, and head to use the lift...

The dungeon is an absolute labyrinth, but the waypoints are rather frequent so nip from one to the next to the next, eliminating the spiders and skeletons that appear to ruin your day. Soon you'll come to a good old fashioned 'squishy floor' puzzle. Yes, you do have to run across it. There's no set way as the pillars are rather out of sync, but if you give the pillars about a minute or two to jiggle up and down then the second should be going up when the others are going down and vice versa.

This boss is as simple as they come, circle strafing and bullet spamming. The daughter has a number of attacks but they are all easily avoided, and her many minions provide ample second wind fodder. Just keep moving and shooting and she shan't last long.

With her dead, continue up the tower until you come to...

The Handsome Sorcerer isn't the most creative of boss battles, but does have a few little tricks.

In phase one the sorcerer will summon a pair of weak doppelgängers. Concentrate fire on the core sorcerer and catch the others will spread if they're proving tricky.

In phase two the sorcerer will summon skeletons. Focus on stepping backwards while firing to funnel the enemies into your shots.

In phase three the sorcerer will take to the air and summon dragons. Kill the dragons, this will cause him to land in order to summon more, giving you a huge opportunity to deal some damage.

And that's that. Free the princess and marvel at the pretty gameworld below. Congratulations!