The Man Who Would Be Jack

For the final obstacle in your way to get to Control Core, Angel suggests to go to Opportunity. Before setting out, it's a good idea to bring along some corrosive weaponry, as Opportunity is filled with Loaders and other armored foes. Fast travel to The Highlands - Hyperion Bridge and use the travel point nearby to get to Opportunity.

Angel says you will need a bio-scan, as well as a voice sample of Jack's in order to get past the third door. If you can manage to kill one of Jack's body doubles, then Angel will help with the rest. So, your goal is to find and kill Jack's body, which is pointed out on the map as your objective marker. There will be plenty of Loaders and Hyperion Personnel in your way, though.

Jack's double is quite tough, as he has a lot of health and shield, and tends to run away, often leading you into more trouble with other enemies. The catch is that his double will not engage in combat until you either hit him or he sees you, so you can get rid of the enemies surrounding him until you're ready. Kill the double and loot the stopwatch that drops, which Angel points out can collect voice samples.

Go to the info kiosk and test it out by collecting the first sample, but Angel says that she needs to more until she can create a voice modulator. There are four more info kiosks to go to get voice samples and once you've collected all four, head to the objective point that follows to upload it to Angel (watch out for the HOT Loader inside the door). Grab the voice modulator and return to Sanctuary to finish the mission. 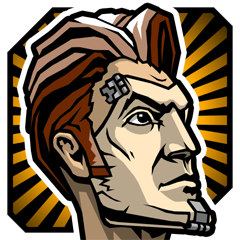 Completed the mission "The Man Who Would Be Jack"