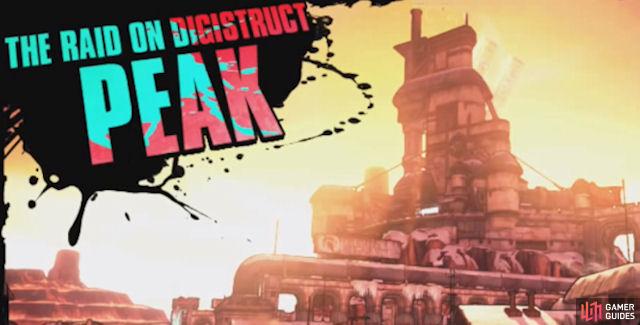 Digistruct Peak is an area that is unlocked upon purchasing the Ultimate Vault Hunter Upgrade Pack Two, and was released on September 3, 2013. Not only does this DLC raise the level cap to 72, but you can also increase the levels of enemies and loot up to level 80+. There is only one true mission in Digistruct Peak, but it can be repeated multiple times once you reach level 72 and are on Ultimate Vault Hunter Mode.

Once you are at the requirements above (level 72 and UVHM), complete A History of Simulated Violence and you'll unlock Overpower Level 1. In order to access this, you'll have to reload your character back into the game, allowing you to pick the Overpower level option. You can continually do this until you unlock Overpower Level 8, the highest it can go. Note that it will only unlock the next level for you and if you're playing with others who are playing on a higher OP level, then you won't be able to unlock those until you do it yourself.

Not only do enemies increase in level by one for each OP level you unlock, but the loot you can find will also increase accordingly. However, you'll need to be careful with this, as enemies 2+ levels over your own will begin taking less damage from your characters. Naturally, most enemies will typically spawn at a maximum of level 82 on OP level 8, but there are a few that can go higher, such as certain raid bosses and even the Iron GOD, who will reach level 92, giving it an outstanding 99.2% damage reduction!