To begin the Tiny Tina’s Assault on Dragon Keep DLC you need to travel to the Unassuming Docks via any fast travel station. The moment you click it, you’ll be introduced to the concept of the DLC. Turn out, Tina is in charge of the entertainment. Oh no! It almost stayed sunny for a moment there. Anyway, traipse forward and you’ll soon be introduced to this DLC’s first type of enemy.

Skeletons can be nasty and kind of resemble the Bandit enemies from the main game. Most come equipped with headgear, and can survive a headshot before you can land a critical. What’s more, being made of bone these chaps aren’t as weak to fire as their fleshy predecessors, plus they can be hard to hit sometimes due to how skinny their body is. Try and equip an explosive, or corrosive weapon to deal with these bony adversaries. 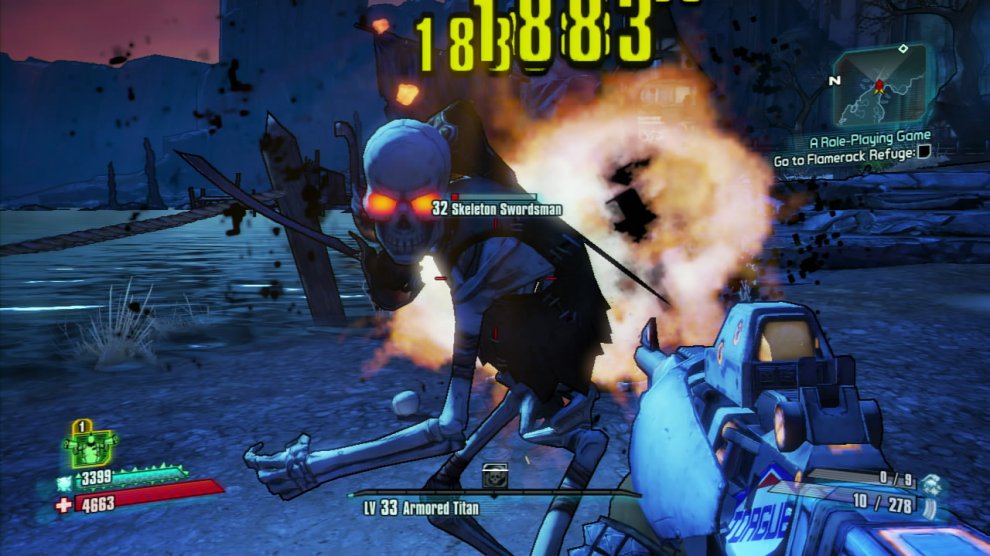 We need to advance towards the town. There isn’t much in the way of cover along this path so make grand side steps as you move across the beach, trying to avoid enemy projectiles as you go. Compared to Hammerlock’s savages from his DLC, it’s nice to be able to blast an enemy straight on for a change. As you get close to the gate Tina will show her inability to understand game balance and spawn a dragon on you. You don’t have to fight this thing, just watch the narrative play out and you’ll soon meet your true adversary.

This is a basic boss encounter. Mister Boney is a midget, and he has the support of several boney allies. It’s a good idea to simply run backwards, luring him as far away from the keep and his friends as possible, blasting the entire way.

With the boss dead, continue to move around the left of the town. While here you will encounter Immortal enemies, one of the DLC’s more interesting tricks. These enemies must be 'killed', in the traditional sense, and then you need to run up to them and yoink the glowing blue sword from their back to actually kill them. Let them stand back up and they’ll level up at the same time, and that’s bad.

Eventually you’ll reach the town. Once here you want to talk to the townsfolk, who will point you towards Eleanor. Talk to Eleanor, and then you’ll be pointed towards the gatekeeper, so go have a word with him.

Oh look, it’s Mr. Torgue. Well, may as well do as he wants. Head to the waypoints and take out the incendiary barrels next to the winches. 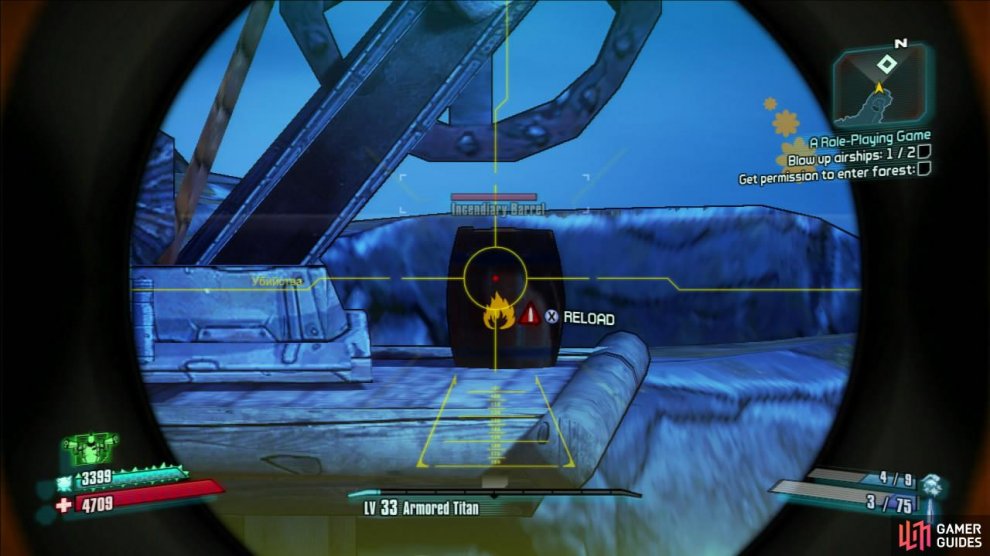 We’re still not done. Roll back to Mr. Torgue and have another word. Spin 180 degrees and run towards the bar and head inside. When told to, give one of the patrons a hearty slap around the chops and then start to chase him immediately. The patron will run in a circle so once you get a bead on him, cut a corner so you can cut him off and deliver the explosive wallop.

Return to Mr. Torgue to finish the mission.