Hop into a dingy and head west. Our objective is through a cave, so quite why Hammerlock made such a fuss over the transport is a mystery. 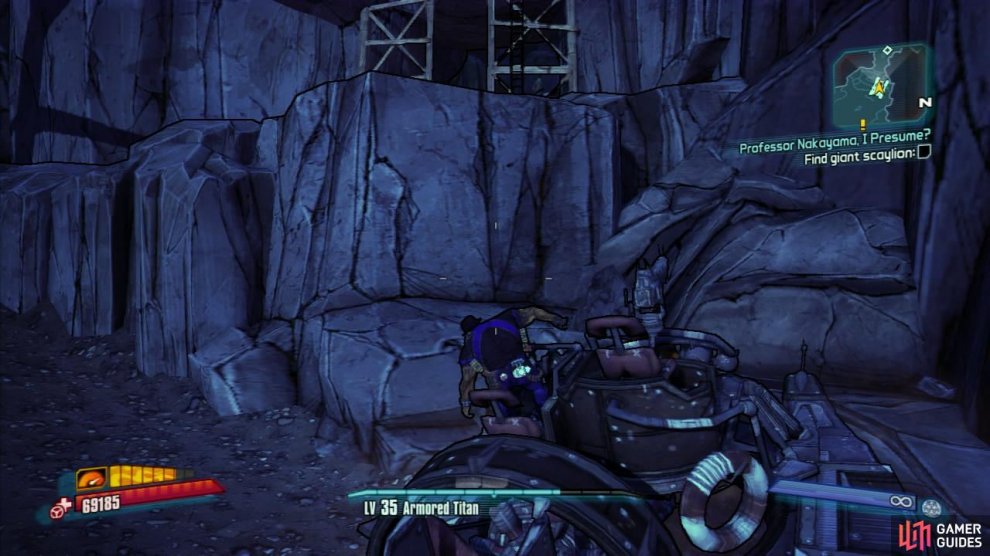 Anyway, clamber through the cave and check out the expanse. There might be a Badass Borok under you though, watch out.

The Borok is a cousin of the Spiderant. Like the spiderant, the Borok has an armoured face and a vulnerable bum. The Borok, however, has both of these features in an extreme sense; their face is invulnerable, going so far as to reflect attacks, while the arse is basically tissue paper. With this in mind treat them in much the same way – shoot that bottom.

We're heading to the right, following the cliff, but you might want to tackle the Borok nest to your right for challenge and 'getting used to it' purposes. Either way, aim for the area partition to the right, we're heading in to Scylla's Grove.

North East is our destination. We're here to deal with a cave of Scaylion's.

These are scorpions. As such, avoid the tail. There isn't much to elucidate aside from that, these enemies are as simple as they come; back pedal and shoot, they're only dangerous up close.

Work your way through the linear cave, killing Scaylion as you go. Eventually you'll meet your waypoint, and your job here is, unsurprisingly, to kill Scaylion's. Kill enough and a big'un will pop out, name of Thermitage. Shoot him to death.

Turns out Nakayama isn't impressed with our desire to simply monster hunt, so now we have to go savage killing. Run back towards the area entrance, at the cluster of vending machines you can find a ramp leading up to a savage village, use it.

You must fight through a linear path of savages, which can prove to be surprisingly tricky. Make sure you're using those Borderlands fundamentals, drawing melee fighters far away from their ranged chums so that you can deal with them while under less pressure. This said, don't ignore witch doctor's for too long...

You'll soon ride an elevator up to the top of the plateaux and meet an old friend. Don't expect the savages here to stay friendly for long though, so move to somewhere with cover so that you can effectively fight back when they do turn nasty. The onslaught here is nasty, and frequent, but it is witchdoctor free so as long as you remain lightfooted, running backwards and hitting the squishy parts, you should get through this fight with few problems.

Hand the mission in.