Head down into the Dwarven Crypt. Now be careful, the tantalising looking chest in the centre of the room is actually mimic, and will come to life and try to eat you the moment you touch it! Mind you don't jump... 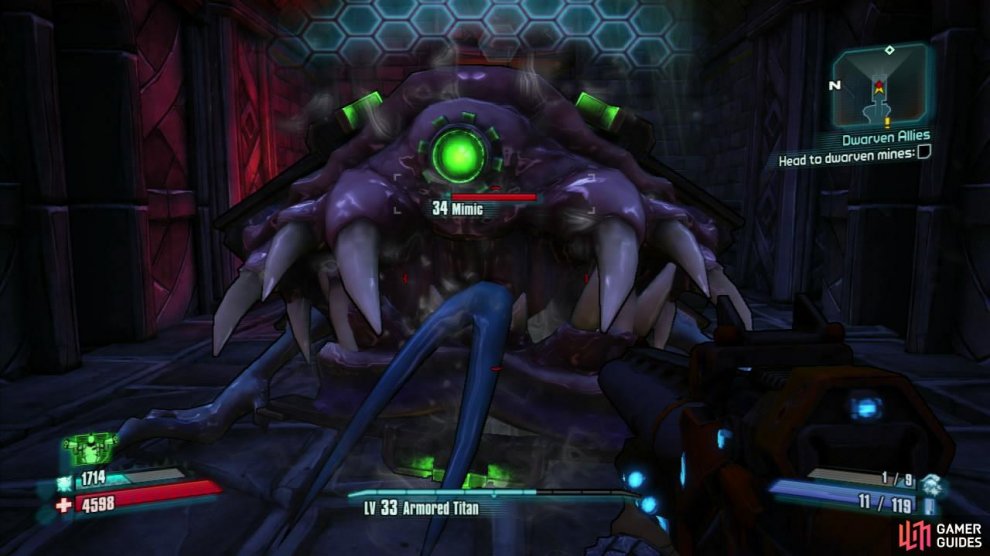 Simply follow the linear path in front of you, dealing with the baby dragons and orcs that get in your way. Word of advise, you don't have to stick around and kill all of the orcs, and a super powerful chap might appear. If he does, and you're not confident beating him, then just run past. You'll soon find the Dwarven King. Do as Brick says and punch him.

These stout fellows are possibly the most aggressive race in the game. Complete with Gunzerker sub-class (quite fitting considering they all look like Salvador), these guys are short and will try to riddle you with bullets. Extend them the same courtesy, simple as that.

Head up the ramp in the direction of the waypoint, and then head onto the bridge. Keep following those blue diamond and enjoying the scenes.

The door is locked, again. Turn around and once back over the bridge, hang a right up the ramp here to converse with the wizard.

We need some key letters. Head south towards the first waypoint but don't run past the dwarves, we need to deal with them so that their friends will open the doors in front of us. Take your time, steam rolling anything that tries to take you out. You'll eventually come to a treacherous jump over lava. Fail it.

Upon failing the jump more platforms will appear, making it possible. Follow the platforms to the right, and time your jumps at the last second. The route is fairly obvious.

Turn back towards the mainland and look to the right, a path hugs the side of the building and this is where we need to head. 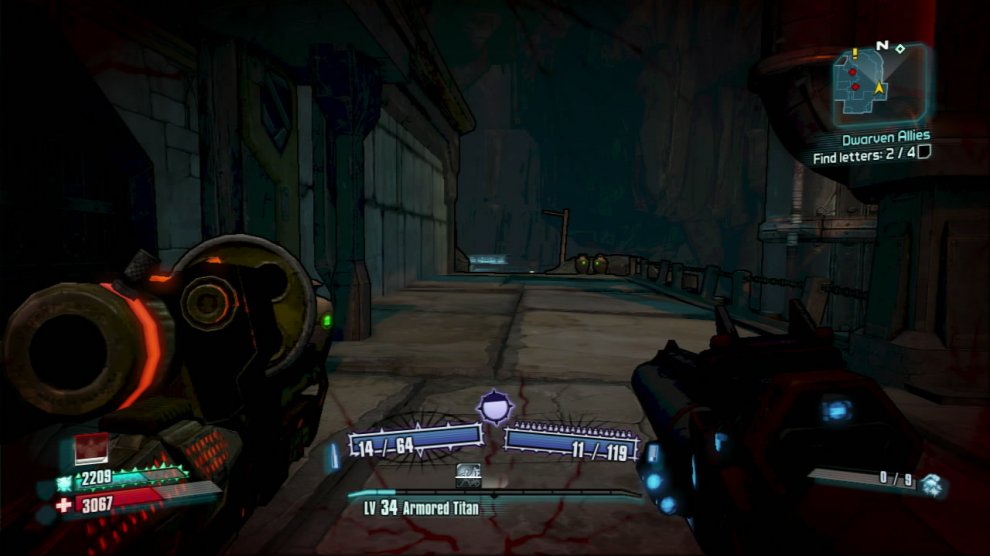 Follow the path around, killing the spiders on the way. After passing through a bottleneck you'll find more dwarves who will soon be attacked by orcs. You can join in with this ruckus, or let the two factions fight between themselves. Do as you wish, but watch out for Dwarf snipers on the ramparts.

Fight through the castle and then follow the waypoint to the left, into a room with a large floating cube. You'll see many green crystals atop the stairs, give them a twist and eventually the cube will lower. Continue to twist the crystals and soon Brick will protest against the puzzle, allowing you to punch the cube open. Go grab your letter.

Head back into the antechamber and swing to the left, into the Ingot Processing arena.

The Gold Golem is most vulnerable (well, least aggressive) when it's in the middle arena. To pull him down, destroy the 'weird ass magic globe' that's floating around the circumference of the room. When the Golem is grounded simply circle him, filling him with bullets.

If the Golem does jump back to the ledge try and use the top of the ramps to hide from his projectiles, popping him with shots when you can.

Now simply retrace your steps to the locked dwarven door and enjoy the scene. You'll probably work out the punchline before the party...