So, our first target is 'Sandman'. This is the first typical sort of level in this DLC and it sees us heading to a new zone; Hayter’s Folly. To reach Hayter’s hop in your Sandskif and ride back to Oasis. From here, zoom west towards the waypoint. The path you find will be full of pirates, of various flavours, so take your time battling through them, drawing and sniping as the enemies require it. Once it’s quiet, head around and in to Hayter’s Folly.

Hayter’s is incredibly linear. Follow the path to the right, dealing with the pirates individually as you go. Before long the area will open up, and you’ll see some Crystalisks waltzing around. Shoot them in the glowing crystals to deal with them quickly and continue to follow the chamber north.

As you continue you’ll be set upon by Skags. Try to distance your encounters, pulling back if you see Skags appear just so that you can tackle them and the Crystalisks separately. It’s worth noting that some of the Skags are sitting atop the rocks here, try and snipe them out early on the avoid any sort of difficulties.

Keep following the path around. A general strategy to adhere to is that of sniping. You’ll soon meet some more pirates, and if you equip a sniper rifle you can clear these rooms stress free. The walkways are windy, but your line of sight is fairly long.

After climbing up a rickety construction you’ll come to The Hot Spring Hideout. This large arena is full of baddies, but we only really need concern ourselves with moving around the edge in a counter clock-wise fashion. It’s worth noting, however, that there are guards patrolling the floor; snipe these chums early on to avoid crossfire later. 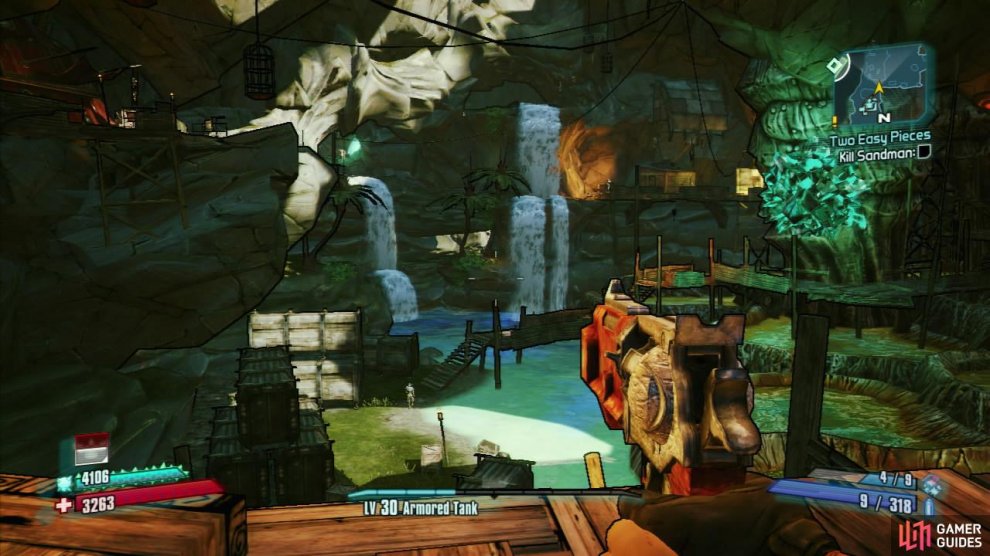 Work around anticlockwise and then, again, follow the linear path. When you get the objective to 'open gate', swing around and spot the ladder behind you. You’re looking for the switch at the end of the wire leading up here from the gate. Flick it, then head through for a boss fight.

These two enemies are – for cutscene bosses – incredibly weak. In fact the main 'difficulty' of this fight comes from the gunners and buccaneers that join them. Otherwise just handle these enemies like you would any midget and berserker. I mean bullets. Lots of them.

Just follow the waypoint to grab the compass piece from the chest. Now follow the cave North, drop down, then head back to the entrance.

The Hyperion Caravan is back in the Wurmwater Flats, so hop in a Skif and get going. Drive as if you were heading to Scarlett’s ship, but carry on to the next right turn. The Hyperion caravan is sitting under a large anchor. Just roll up in your skif and use the vehicle to decimate the loaders guarding the convoy, then hop out and grab the compass piece.

To finish off this quest, head back to Scarlett. She’s standing right where you left her.