Upon escaping the burning Helicopter, you’ll be given back control. Imediately sprint forward and away from the cultists by pressing down [L3] while you proceed forward.

Run slightly to the left as you proceed forward, passing a small campfire on the way and arm yourself with a Branch before continuing on. There are too many Cultists in pursuit for you to take on with just this weapon. 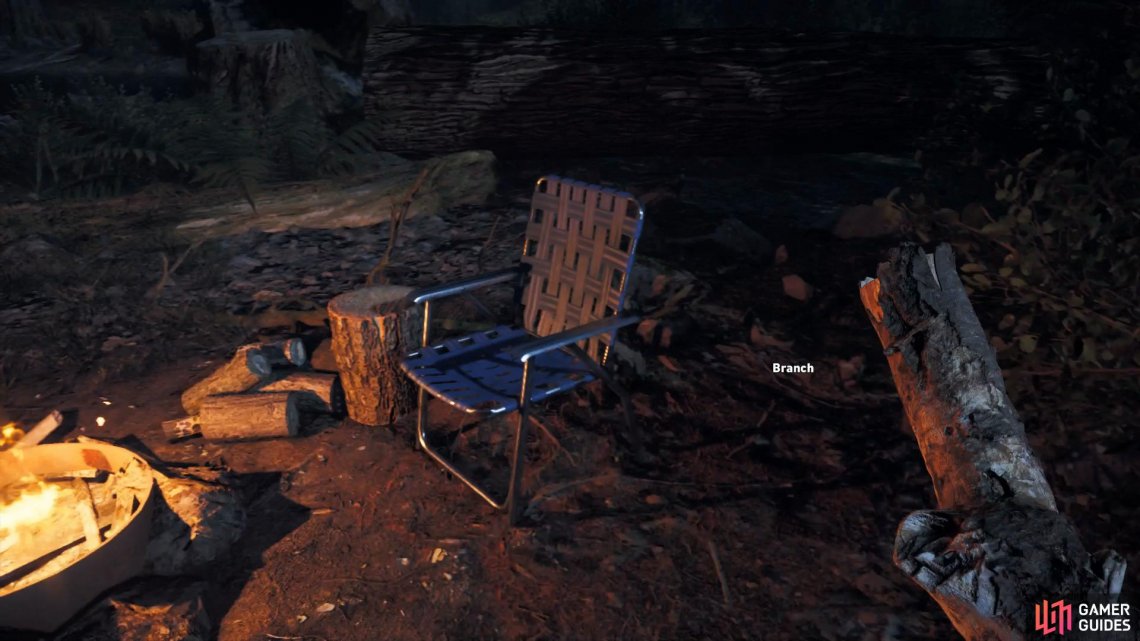 The branch is just one of many melee weapons you’ll find throughout Hope County. Melee weapons can be useful in the event you use up all your ammo.

You’ll get a brief tutorial on Stealth and the Detection Meter. You’ll see an arched meter in the direction of a suspicious sentry and if the entire meter fills, you will be detected and the sentry will attack. Crouch with the [Circle/B] button and get close enough to see the Takedown prompt, a technique that will instantly incapacitate the sentry.

Note: This guide will attempt to direct you through most missions using stealth if possible. Being discovered has no bearing on gameplay other than increasing the difficulty of the encounter.

After the tutorial, crouch and head to your left around the nearby rock, you’ll see a cultist with his back to you, talking on the radio. This is the perfect opportunity to move behind and score your first Takedown!

You can loot with the [Square/X] button and you’ll pick up the Handgun and some ammo. You can switch between the last two weapons you used (in this case, the newly acquired Handgun and the Branch) with a press of the [Triangle/Y] button, a useful tactic in the heat of battle.

Head into the hut here and pickup some more bullets at the back along with another two melee weapons, a Pipe and a Baseball Bat, both of which are stronger than the Branch. You can only hold two melee weapons on you at any given time so replace the Branch (by opening up the weapon wheel by holding [L1/LB]) with one of these. 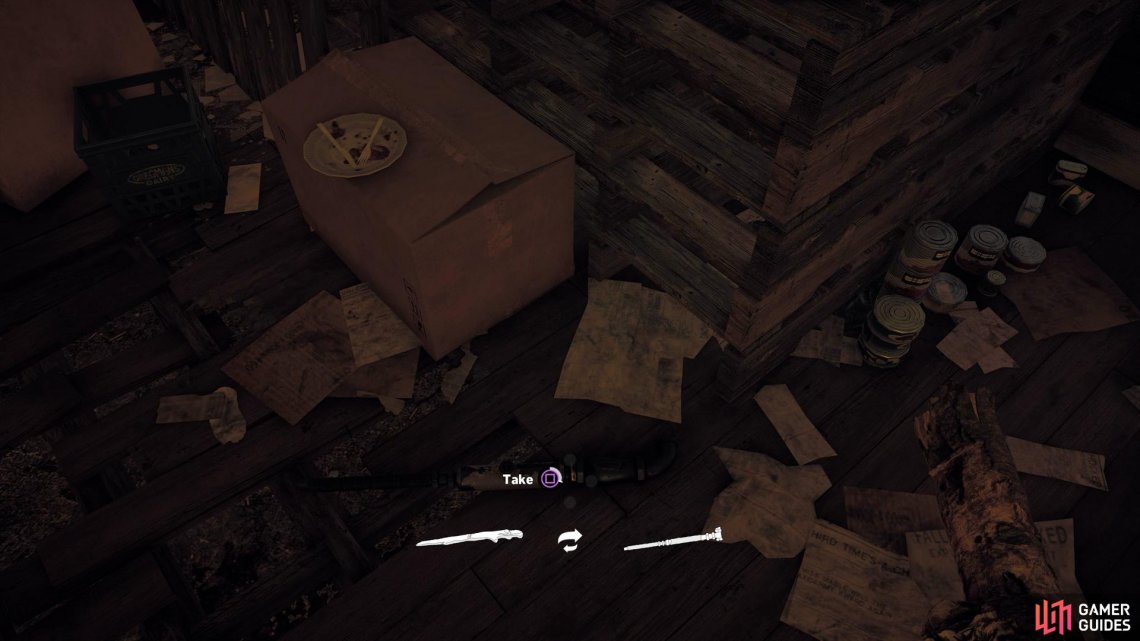 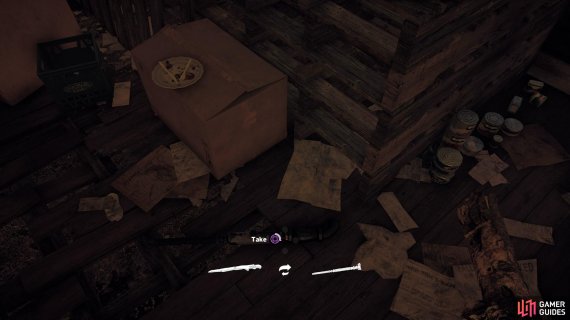 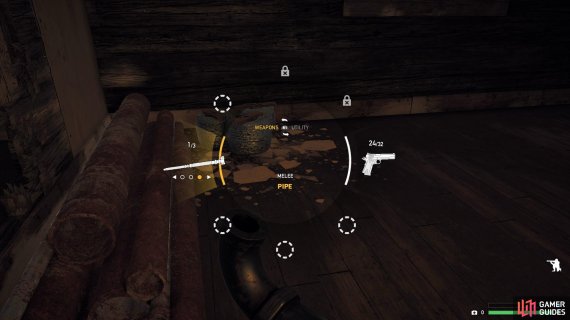 You will swap the currently equipped weapon when you have two already (left), equip the weapon you wish to use or change with the weapon wheel (right)

Exit out of the hut, turn left and head towards the raised platform where the Marshall will contact you and instruct you to meet with him at the trailer house. You will spot two more cultists at the campfire nearby. Stealth behind the cultist standing to the left and take him out before turning your attention quickly to the one sitting next to him, if done quickly, you should avoid an unnecessary gunfight. If you are spotted, feel free to take out the handgun to make short work of them.

This will most likely alert two or three more cultists who will come rushing down towards you, take out the Handgun and dispatch them quickly, a shot or two for each should suffice. Remember to loot the corpses after the battle, you can replenish any ammo you may have spent.

Note: Make a habit of trying to always target the heads of any enemies. Not only does this defeat them quicker but you’ll also preseve precious ammo.

Continue onwards towards the trailer house the Marshall mentioned earlier, denoted by a yellow diamond on your screen. As you approach the trailer house, look to the left of log pile to find three ammo boxes to replenish your supplies. Before proceeding to the door of the trailer house, note the location of the red canisters, you’ll need to make use of these shortly. Head up the stairs and toward the door to meet up with the Marshall.

Your brief reunion will be cut short by a horde of cultists attacking the trailer house. You’ll be given your first Assault Rifle and be tasked with holding out against the incoming cultists.

Tip: The assault rifles have a particularly harsh kick to them, with recoil all over the place from continuous fire. Instead, make a habit to burst fire to improve your accuracy!

Take aim out the window and start firing at the cultists, there will only be a few right at the start. Take cover if you find yourself taking too much fire, you’re no good to the Marshall if you’re dead! 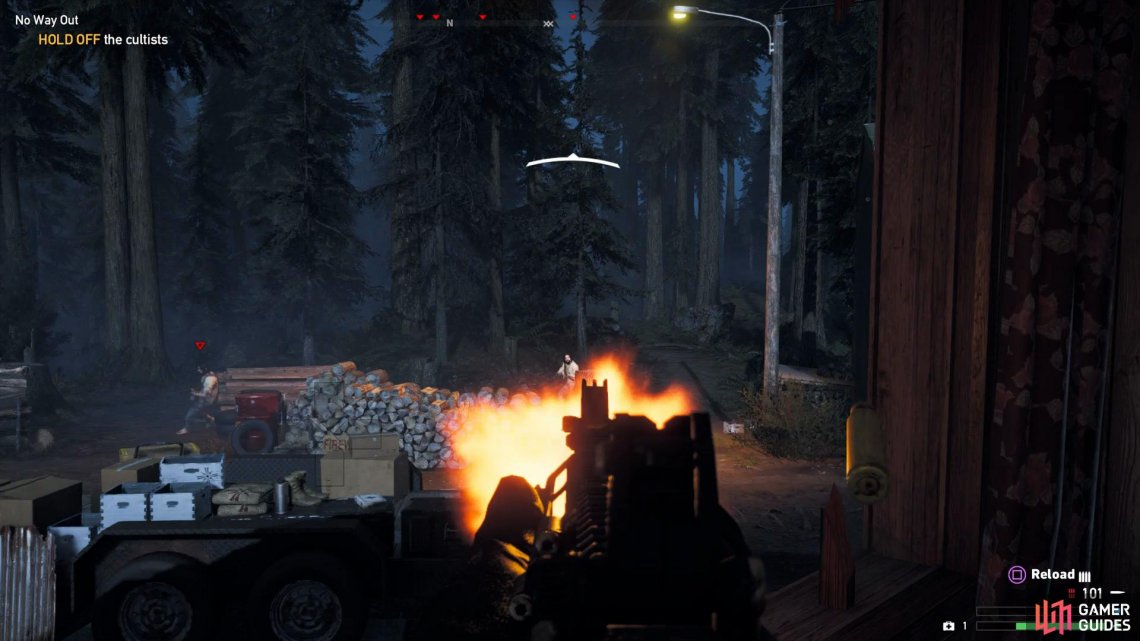 (1 of 2) Pay attention to your compass, the red triangles will let you know where enemies are attacking from 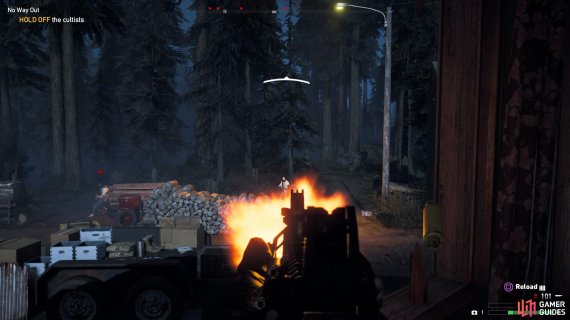 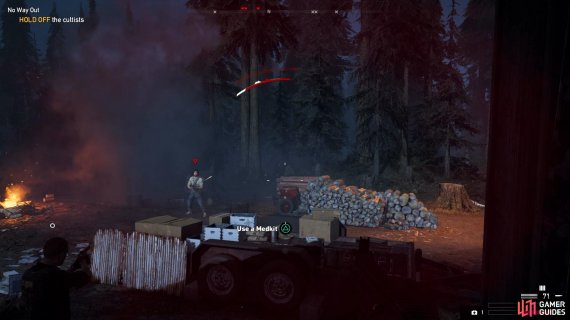 Pay attention to your compass, the red triangles will let you know where enemies are attacking from (left), fire at any canisters you see when enemies are close by to cause an explosion (right)

The Marshall will make a run for the truck to the East of the trailer house so cover him while he gets in before he instructs you to jump in. The door to your right can be unlocked with the Key on the side here, unlock the door and jump into the truck.

At this point, the objective is clear, hold off any cultists that attack while you make your escape. You’ll gain an unlimited amount of ammo for the assault rifle so fire at will.

Tip: It’s very easy to get overwhelmed during this section with bullets coming from everywhere. You can lean in or out of a vehicle with the [Circle/B] button, be sure to do this if you find yourself in need of a med kit.

Don’t lean out at the start here, you’ll drive through the gate and the cultists here won’t be able to follow you as you go across the bridge. You’ll come across a roadblock soon after, try to take out as many as you can as you drive through before another truck gives chase!

Imediately fire at the cultist on the back of the truck before taking aim at the driver, this will cause the truck to go over. At this point, you’ll be constantly pursued, with trucks your main priority.

Grab the Dynamite when given the chance and use it by holding down the [R1/RB] button, aiming at the front of the truck. Try to conserve the dynamite, only using one for each truck if you’re not able to take out with the assault rifle.

Matters escalate when a plane is called in however ignore the temptation to take fire at it and continue the assault on the trucks pursuing behind you before quickly taking aim ahead at a truck.

Keep in the truck as you pass the next set out cultists on the side of the road, ignoring the quad in front. 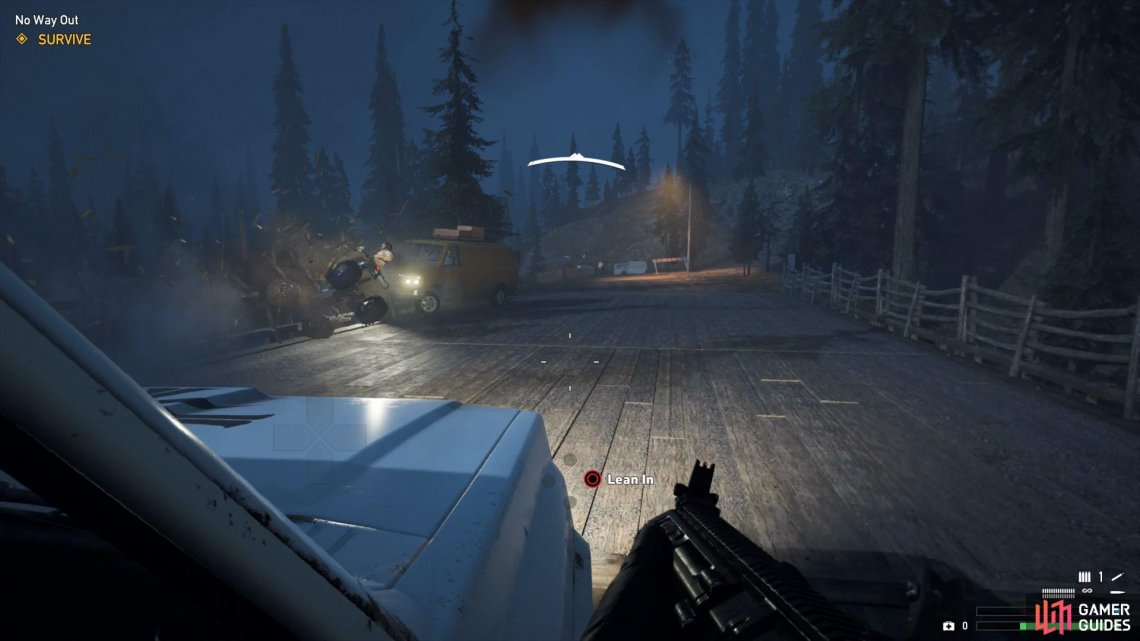 The oncoming van will take out the quad for you, giving you time to heal if you need.

The next truck will come out in front of you, take aim at the two cultists on the back and the plane will hit the driver and topple it.

There’s one final roadblock to deal with, take aim at the canisters here to cause as much mayhem as you can and duck inside the truck if you need to heal up. The Marshall will plough through the roadblock and towards the nearby bridge where one final truck will pull out in front. Take out the cultist on the mounted gun first as you head over the bridge and the mission comes to an end.