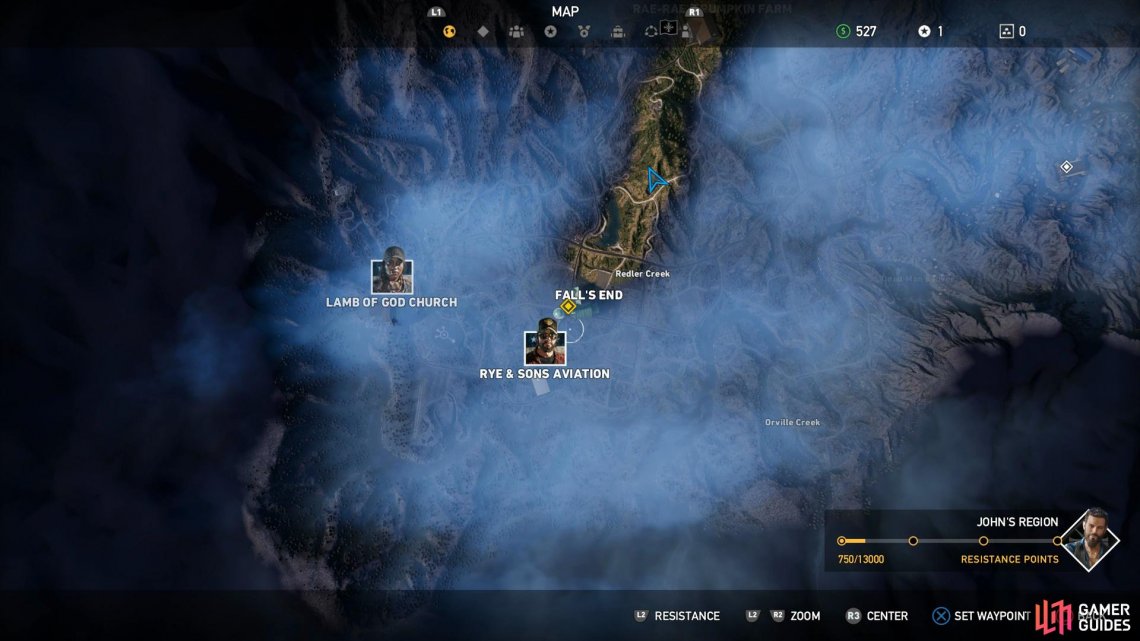 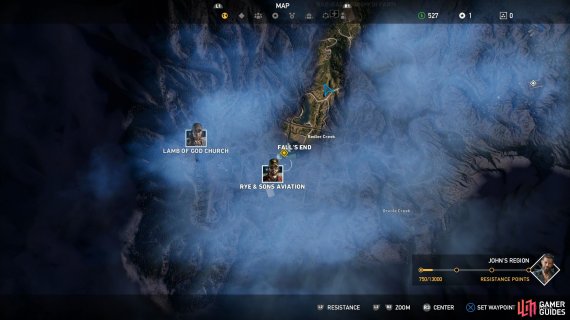 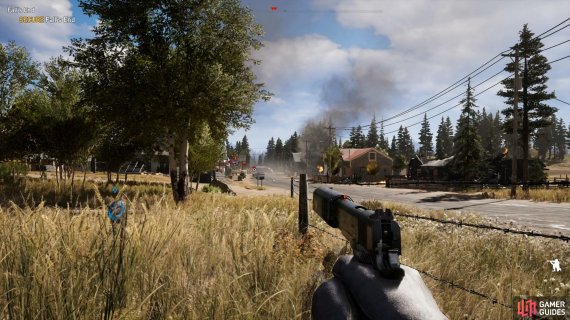 You’ll receive the mission to aid the Resistance in Fall’s End from Dutch, shortly after you gain access to the three regions upon completion of the Intro. Your first task is to make your way over to the town of Fall’s End, located around the centre of the region. If you haven’t already done so, take the time to recruit Boomer from the Man’s Best Friend mission, your canine friend will be useful here.

You’ll want to approach from the north side of the town, cutting across the nearby fields to avoid the unwanted attention of a Cult Roadblock on the main road leading into town.

Your objective will change as you get close enough to the town and it becomes apparent that the Cult have overtaken the town.

Note: The game classifies this as an Outpost even though it’s not filed under the Cult Outpost section. This is of particular note because you’ll be able to achieve the “Undetected” reward if you’re not seen.

We’ll be attempting to undertake the liberation without being seen here but if matters do turn sour, you’ll want to pick up an assault rifle off one of the dead cultists to fight back.

Start by taking out the Binoculars and begin to survey the area of all the hostiles. You should find a total of 12 cultists, the most deadly of which reside on the rooftop of the Spread Eagle bar, manning a mounted machine gun. Once you’re happy with your scouting of the enemy, we’ll begin our approach form the north end of town. 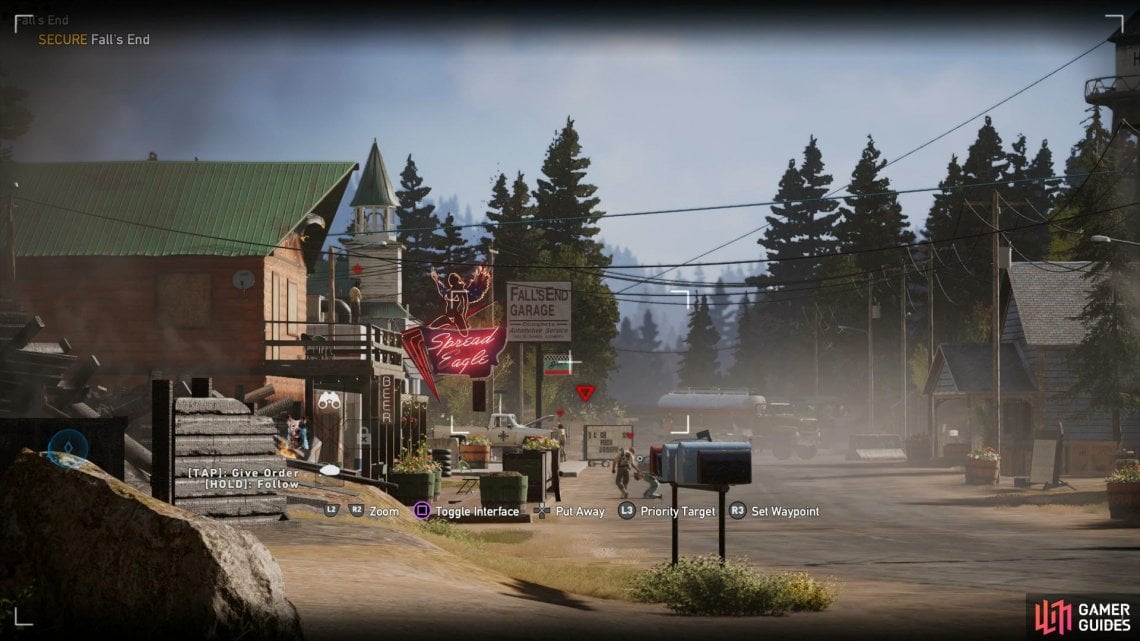 The marksman is a high priority!

Tip: Don’t leave any of the cultist bodies that you eliminate in the open street for others to find, pick it up with the (R3) button and drop it in a concealed location.

Head on over to the large wooden building that you see in front and sneak against the wall while circling around back, keeping an eye out for a cultist patrolling here. Our first target here is the cultist with the marksman icon on his head occupying the nearby roof. Wait for the patrol to pass and then head up the lader when his back is turned. Once you take him out (don’t worry about the body falling off here, it won’t alert anyone) turn back towards the ladder and wait for the patrol to pass by once more, descend the ladder and take him out.

From here, turn toward the white house with the white picket fence and make your way to the lone cultist here at the edge of town and eliminate him. You should turn your attention to the church next so head across the road and toward the back of the church. 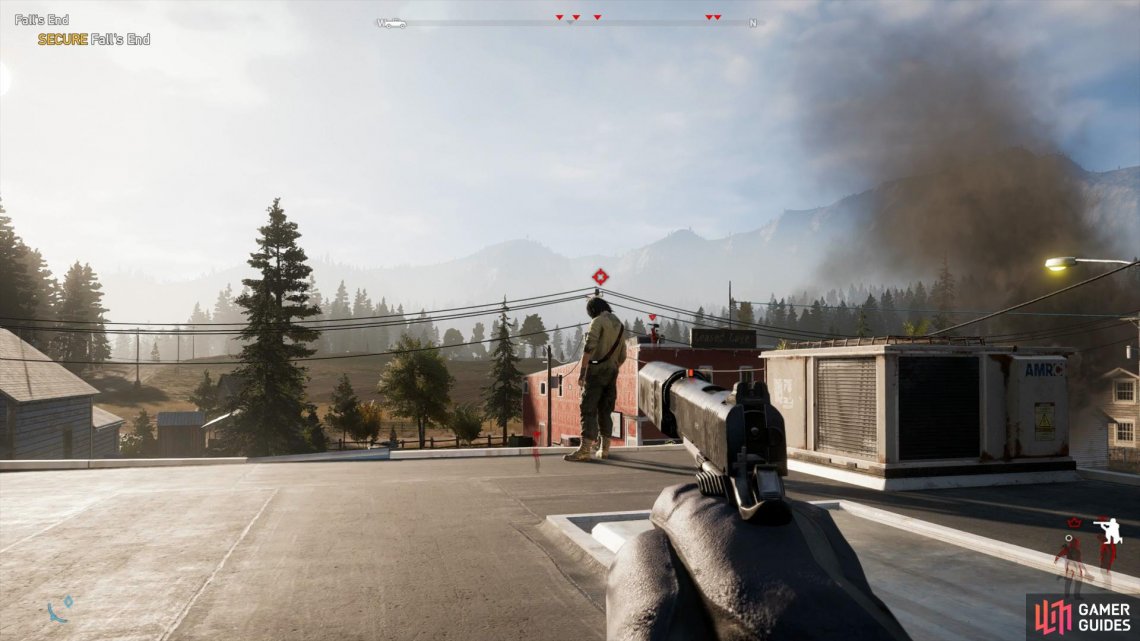 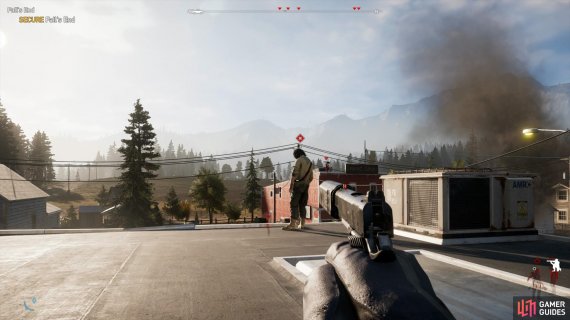 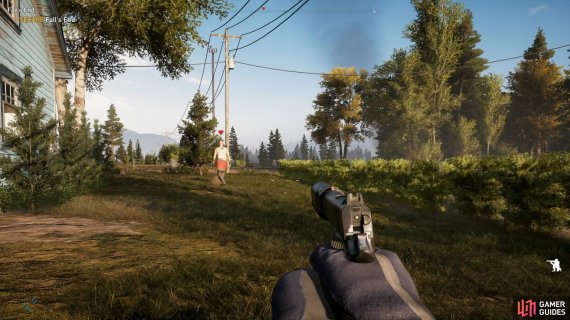 This should be your first target, (left), don’t forget the lone cultist before heading to the church. (right)

Begin by heading around to the south side of the church, past the ladder and you’ll find the first cultist near the bus. Keep crouched and move with your back against the wall, this will keep you hidden from the cultist keeping the Pastor company and allow you to sneak up for the takedown. Turn your attention now to the previously mentioned cultist and take him out when the other nearby cultist has his back turned before dispatching him quickly after (he’ll be busy kicking a nearby door to notice you).

Note: Ignore any hostages you come across for now, there’s no need to untie them.

Climb back down the ladder you climbed and head back to the blue house, you’ll now be able to freely sneak behind the cultist looking at the truck without fear of being spotted from the rooftop. 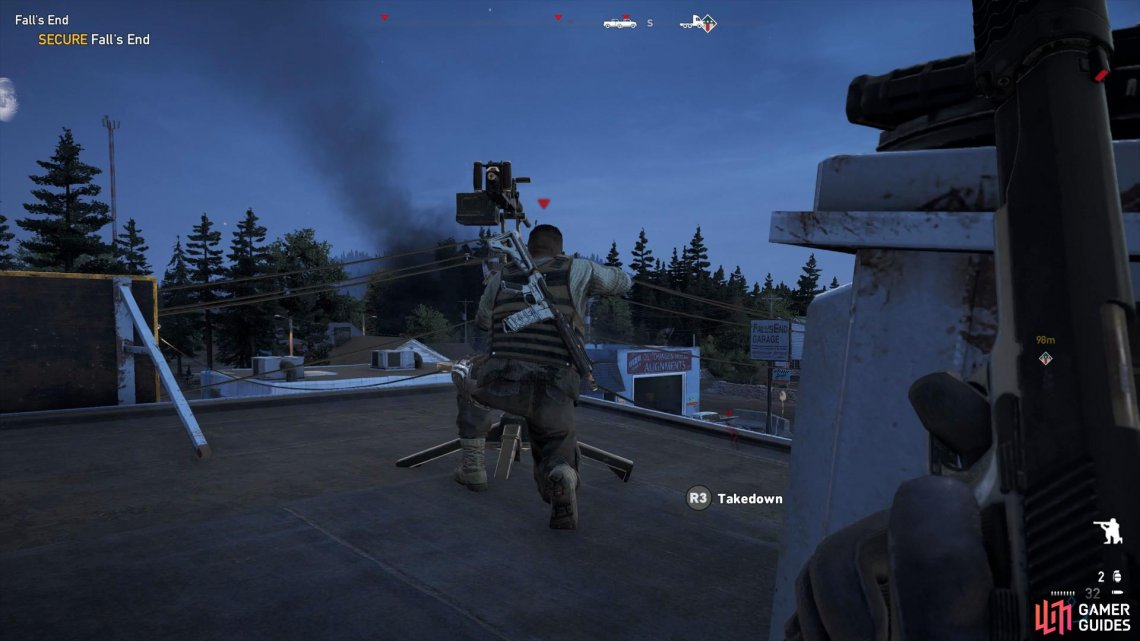 (1 of 2) Dispatch the second rooftop cultist 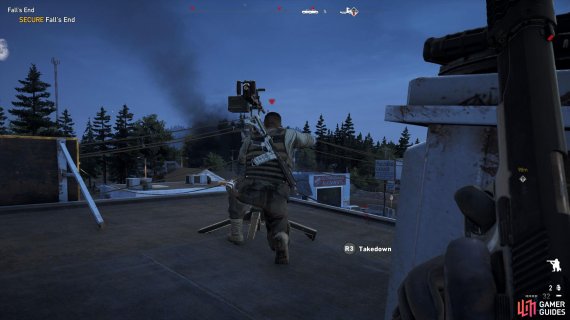 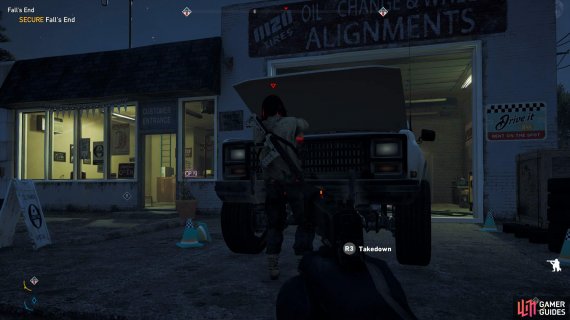 This leaves just two more cultists to take care of, the ones assaulting the other hostage with one of them being a VIP. From the location where you are, you should be able to creep up to the VIP and take him out before quickly taking the other one.

At this point a Plane will begin to assault the area, this can’t be avoided so it’s time to turn to more drastic measures. Dash up to the roof where the cultist with the mounted machine gun was and turn it back on the plane, taking it out and liberating Fall’s End in spectacular fashion!

Inside the Spread Eagle bar you’ll be able to loot the cash register, pick up a Baseball Bat behind the bar along with some Liquor and a Clutch Nixon Map which will add the locations of 8 missions across Hope County. Across from the bar you’ll find the general store who will sell items to you and a Fishing: Bull Trout magazine detailing Bull Trout fishing spots on your map.

In the garage office, you’ll find a safe (these can only be unlocked with the Repair Torch Perk or the Locksmith Perk) where you’ll find cash inside, another cash register and a note detailing the location of a Silo (Cultist Property). Heading into the garage itself, you’ll unlock the vehicle shop (where you can buy and customize land vehicles), an RPG-7 with more Rocket ammo on the side as well as a lootable cabinet. 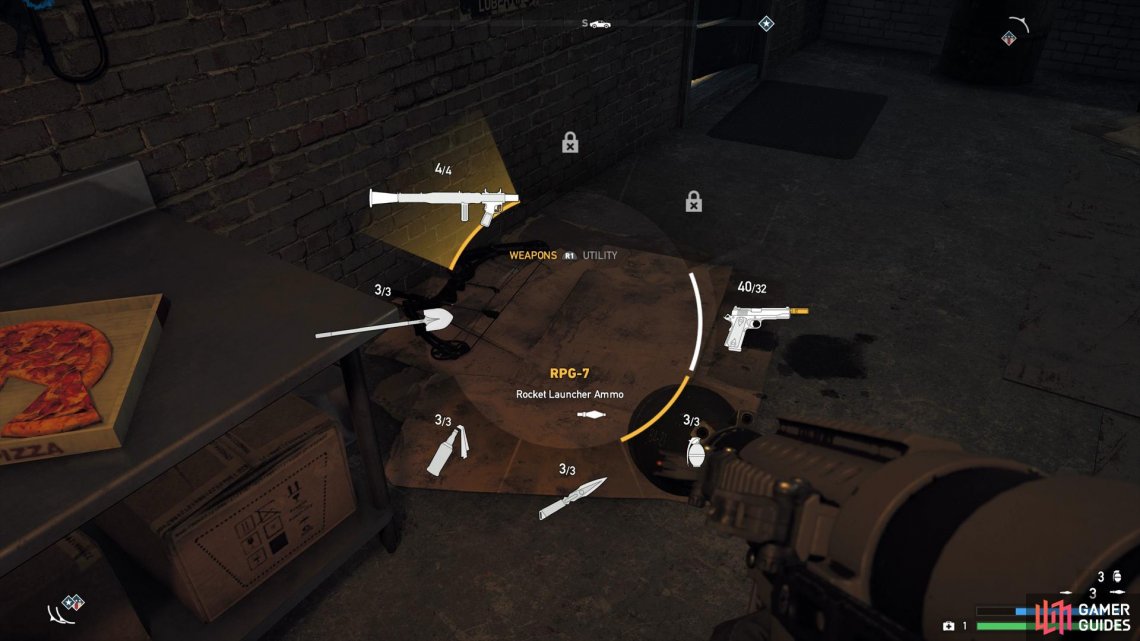 Tip: Even if you don’t intend to take the RPG-7 with you for now, be sure to pick it up and then drop it again as this unlocks it in the store for you to customize and take out when the time arises.

You’ll find yet another RPG-7 in the house opposite the garage, ammo, another safe to bust open, a lootable Backpack and finally some Oregano in the back. Finally you’ll discover an M113 Shotgun, an SMG-11 and one more safe in the Pastor’s Church.

Note: Although you can bust open safes with a remote explosive, resist the temptation as you’ll lose half the contents in the process. Instead, remember the location and come back after you have the required perk.

That’s everything for Fall’s End, at this point take the time to talk with all the civilians and unlock all of the missions available as Fall’s End serves as a hub during your time in the Valley.