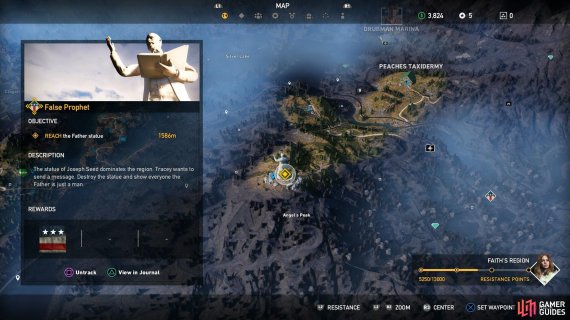 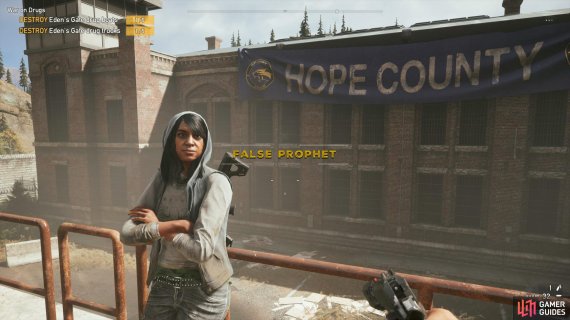 You shouldn’t need guidance on where to find this gargantuan structure (left), Tracey can usually be found on top of the wall at the Jail. (right)

Speak to Tracey Lader upon liberating Hope County Jail and agree to help her out. She wants you to destroy the huge statue of Joseph Seed that you’ve undoubtedly seen during your time in Hope County.

Note: You can forego talking to Tracey and just simply fly up to the statue to begin the mission.

Due to the size of the statue, there’s two ways of undergoing this mission. The first is to take a helicopter from the shop nearby and simply fly up to the statue itself, circling it and firing at the statue. This is much easier than doing it by foot and is generally suggested.

Alternatively, you can head to the statue on foot and navigate through numerous culitsts along the path before taking a rocket launcher (either your own or one found at the bottom) and destroying it piece by piece. Finally, you’ll have to make your way up on foot to the top of the statue to complete the final objective. As you can see, this makes this mission needlessly difficult and is not suggested so when you’re ready, grab a helicopter and head to the statue.

Note: The Auto Repair Perk makes this mission even easier as you’ll be able to recover any damage sustained to the helicopter automatically without having to land.

As Tracey suggests by radio, only heavy ammo will do the trick, the helicopter you’re piloting being just that (or a rocket launcher from the ground). Fire at the statue in segments, starting from top to bottom to gradually destroy the entire structure (there’s a yellow bar under the objective indicating how much is left to be destroyed) and once completley destroyed, there will be a final task. 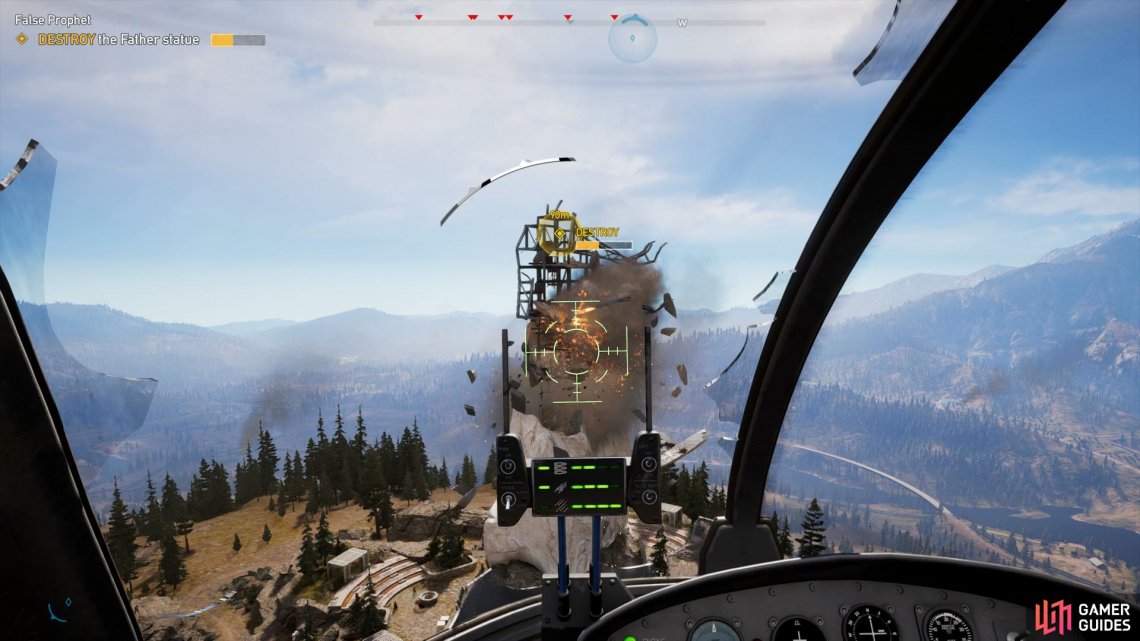 The helicopter is by far the best way to destroy Joseph’s statue.

After you climb the initial stairs you’ll find two cultists on the ground floor along with a Med Kit on one of the crates, kill them and take the ladder to the next floor. Three cultists await at the top of this ladder, head to the right and take cover before picking them off and grabbing ammo from the boxes. Hit the lever here to lower the ladder and continue up to the next floor.

Note: On top of the cultists you’ll find on each floor, there will also be reinforcements from the ground making their way up and helicopters from the sky (use a rocket launcher or have Nick Rye take them out).

The next floor has another cultist for you to kill, a safe to lockpick and another lever to hit, lowering the next ladder and allowing you to continue your ascent. Another helicopter should approach at this point, take it out with another rocket and then climb the crates to reach the next floor.

Another safe awaits you, open it up and then jump onto the nearby crate. Look up and climb onto the girder and then onto another before crouching and walking along the girder towards the outside of the statue carefully. Turn behind you and walk to the left to reach another platform you can climb on and then make a small jump ahead of you to the next. You’ll need to crouch here to go under and walk along another girder, turning to the right at the end and climbing one last time to reach your destination and burning Joseph Seed’s book when you approach it. 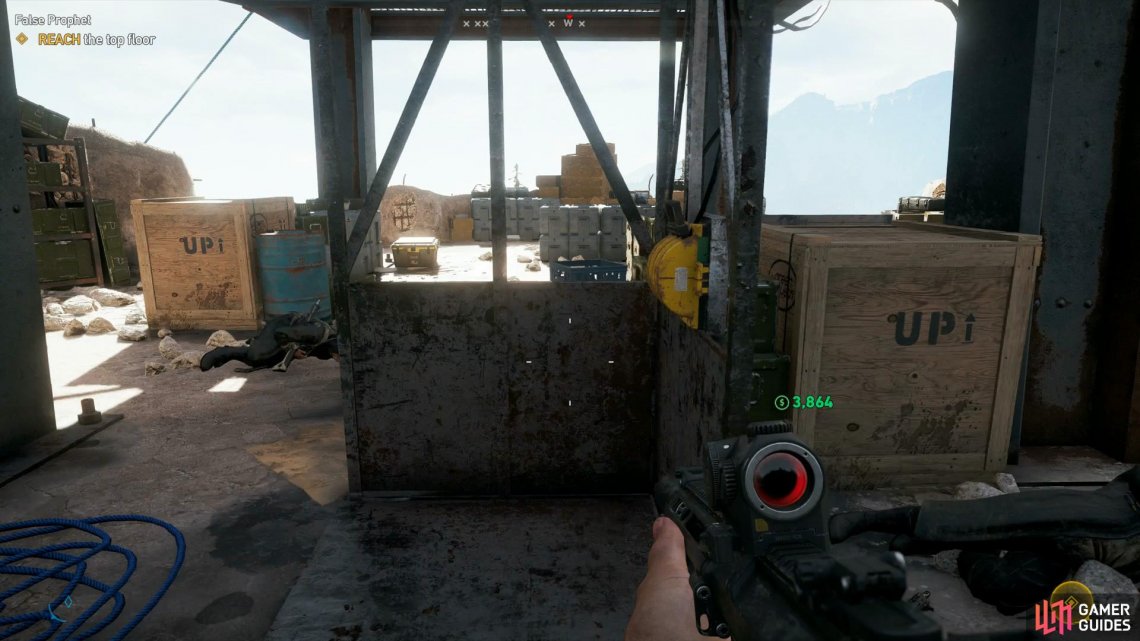 (1 of 2) Look for yellow levers to drop ladders 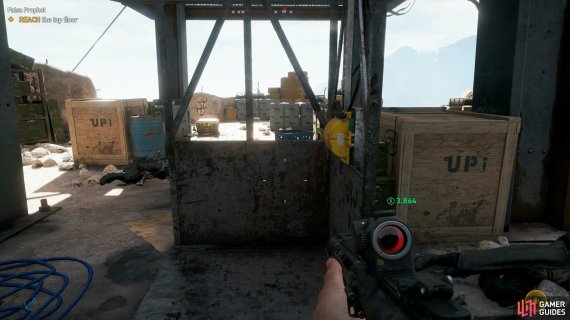 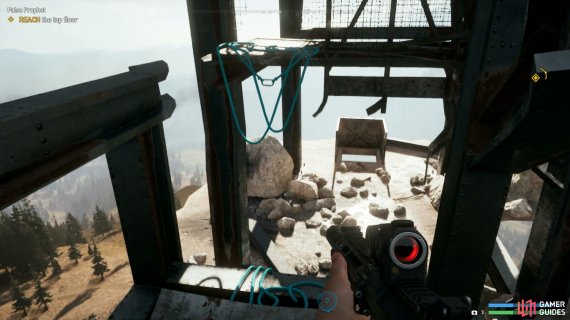 Look for yellow levers to drop ladders (left), as you approach the top, you’ll need to look for the blue ropes to ascend higher. (right)

With the mission here complete, there is one last thing you can do. You can climb up on one more girder and then take a ladder to reach the top of this structure. If you have the Wingsuit Perk, this is a great place to leap off and glide as far as you can, you should have enough height to unlock the trophy related to it.