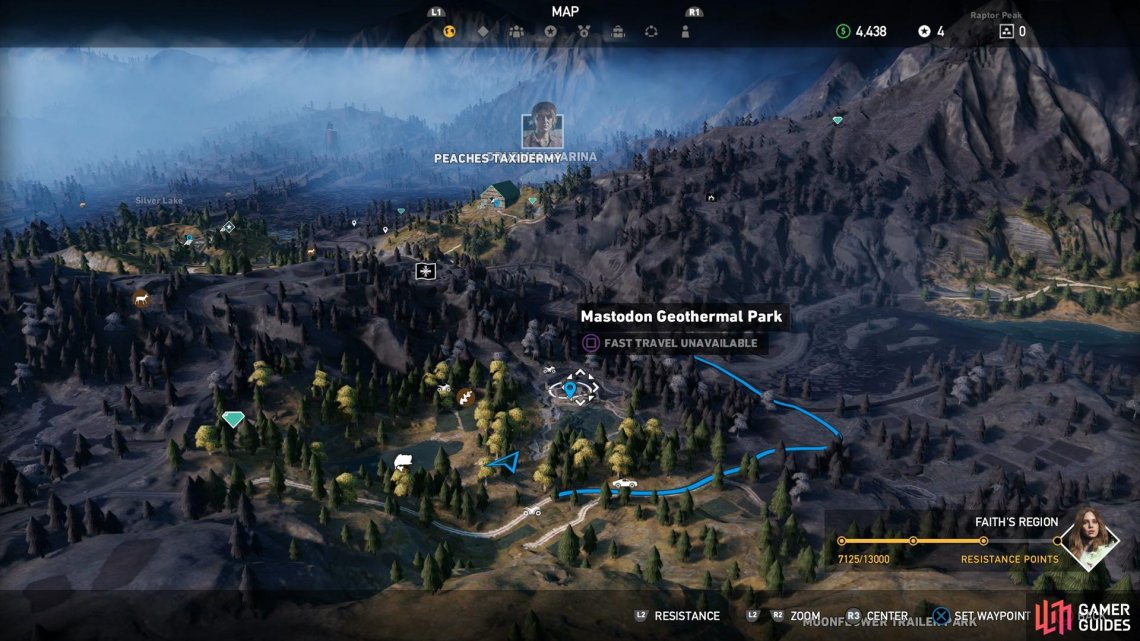 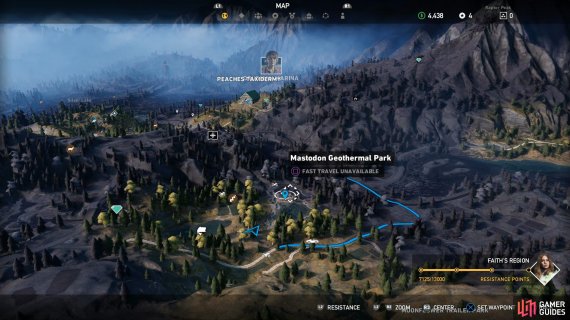 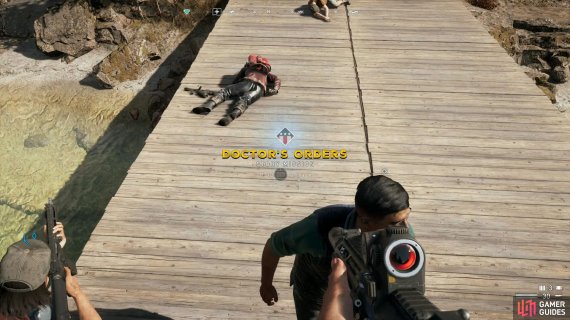 The Geothermal Park is just north from where you recruited Sharky (left), speaking to the doctor after the area is clear starts the mission. (right)

Head to the Mastodon Geothermal Park located north of the Moonflower Trailer Park to find the area under cultist control. Pull out your binoculars from a safe distance and tag the cultists in this area, one of which is a VIP.

You’ll want to begin your approach from behind the two mammoths, near where the Doctor himself is. Come from behind the VIP and take her out before doing the same to the cultist with the flamethower right next to you. At this point, circle around from the right taking out each cultist and with the area secure, release all the hostages (leaving the doctor last).

Get the doctor’s bag

After speaking to Dr. Lindsey and officially beginning the mission,, you’ll need to get his bag from the pond. Jump into the water, swim toward the objective and then dive under to get the bag. 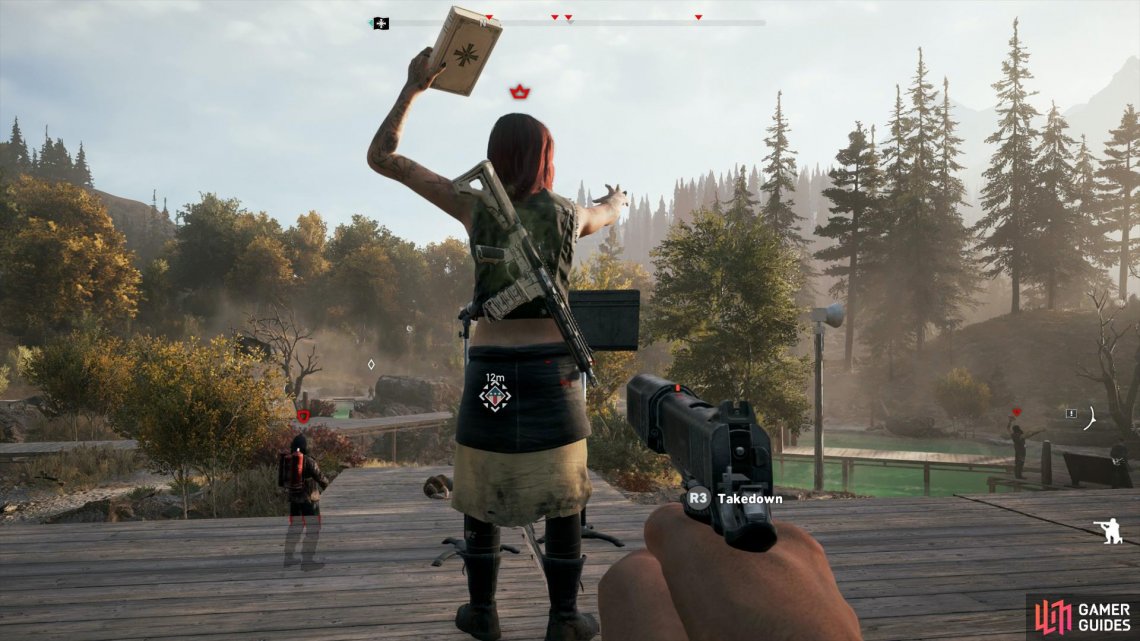 (1 of 2) Begin securing the area from the platform 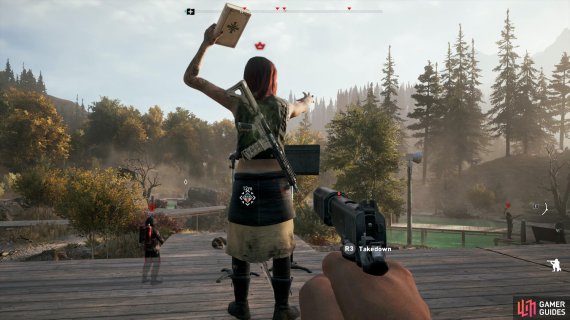 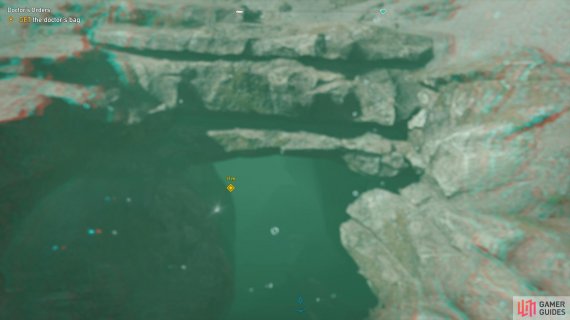 Begin securing the area from the platform (left), you’ll need to swim under this crevice to find the bag. (right)

As you’re making your way back to the surface, you’ll see that a cult helicopter has joined the party, swim to safety and take aim with a rocket launcher or snipe the pilot to put it out of commission. You’ll also have to deal with another two cultists and two Angels to completely secure the area. Once everyone is dead, head back over to the good doctor and give him his bag.

It’s now time to go hunting, the doctor needs the skins in order to help make his bait. You’ll receive on your map locations where you can find these animals.

There are a number of ways you can make this easier for yourself. The first is to purchase the King of the Jungle Perk, stopping animals running away from you as much. The second is to bring along Boomer and Peaches for the hunt, Peaches being great for killing them. Finally, have a good look around the map, you don’t have to look within the objective locations given by the game, you’ll find more all over Hope County (you may have to zoom the map in a bit) such as just west of the Jail. 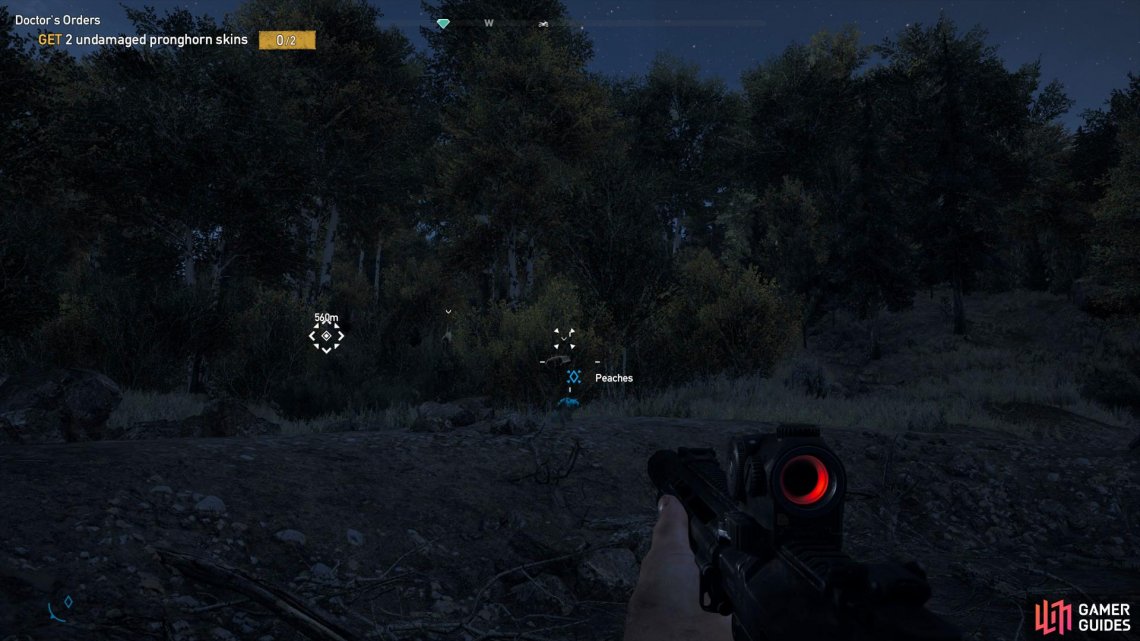 There’s nobody better than Peaches when it comes to hunting.

Tip: It cannot be stressed just how useful it is to have Peaches along for the hunting. If you can get the drop on any of the animals without them noticing you then you can target Peaches to attack and she’ll keep up and take them down in no time.

Dr. Lindsey will be waiting for the skins at his lab at the Hope County Jail. If you’ve already liberated it then simply fast travel back and speak to the doctor to conclude the mission. Alternatively, if you’ve yet to do that mission, head to this page for more information.