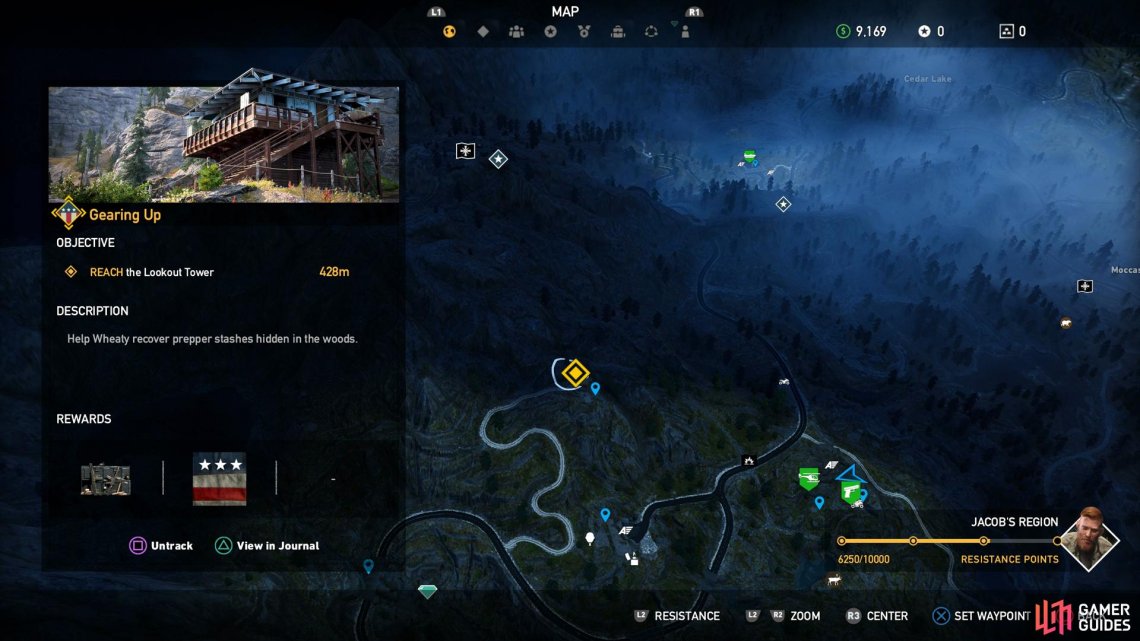 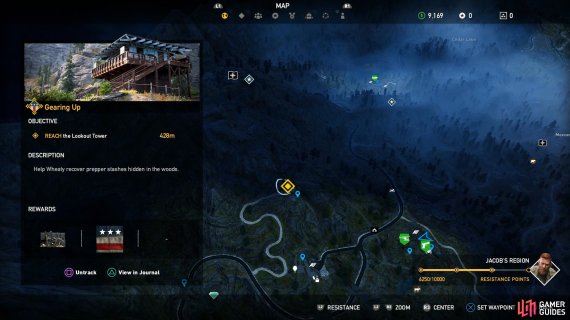 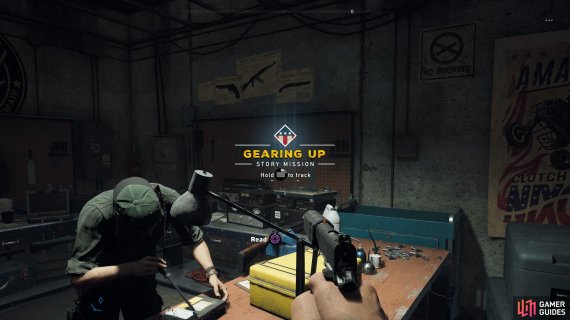 You’ll need to head to the Jefferson Lookout Tower first (left), Wheaty awaits you in the Wolf’s Den. (right)

After you gain access to the Wolf’s Den you’ll find Wheaty near Eli who has a task for you. He needs your help to find all the hidden stashes however no map exists and you’ll need to head to the Jefferson Lookout Tower to get one. You’ll find this tower just a short distance to the northwest.

When you arrive, there should only be two cultists that can easily be disptached (you might be fortunate to find the place completely empty) and then head into the tower. Inside you’ll find a Med Kit, a Comic Book, some cash and the map you were searching for.

The nearest cabin to your location is Cooper Cabin and there’s a helicopter waiting for you nearby, pilot it towards the cabin before leaving it in the hills as you approach on foot.

Approach the cabin from the hills to the west, giving you a great vantage point to tag the cultists in the area. Head down the hill behind the house and take care of the two cultists that patrol at the back here at different times (you’ll have to hide the first one you kill’s body). Circle around to the front of the house to dispatch two more easy targets and then you can snipe the last two by the docks to clear the area.

Inside this cabin you’ll find a safe, some supplies and a Cougars Baseball Card. Head back outside the cabin and a little to the south you will find a small bunker with an LMG, some ammo and the first stash that you’re looking for.

The second cabin is a short walk to the southeast and although initially empty, a patrol heads to this location shortly after your arrival. Stay in the shadows and pick each one off one by one to clear the area of all hostiles. 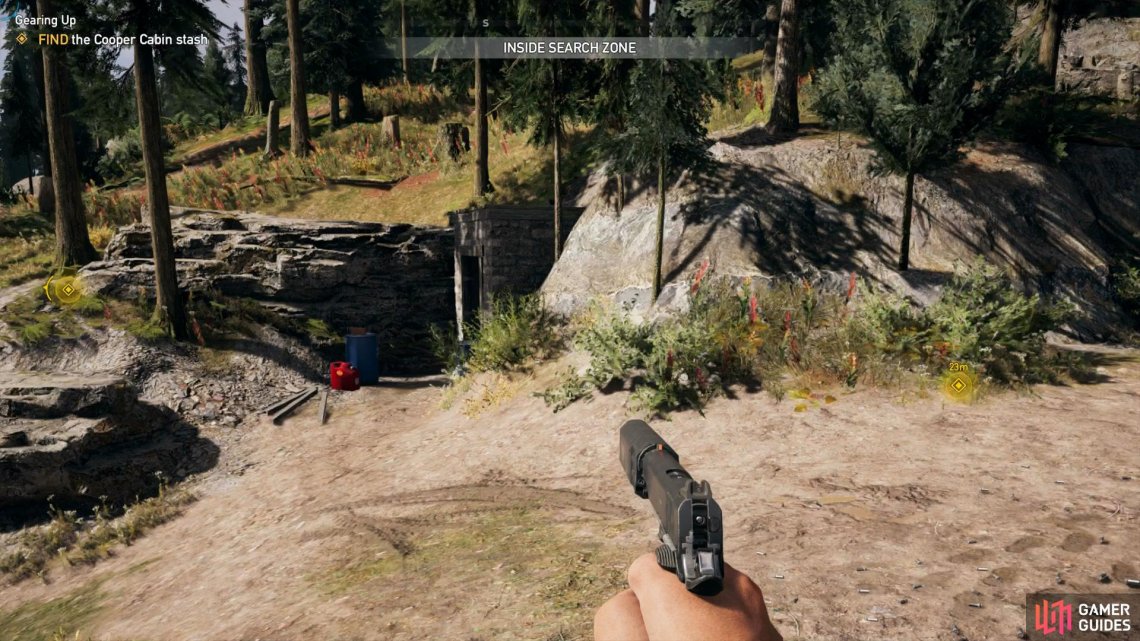 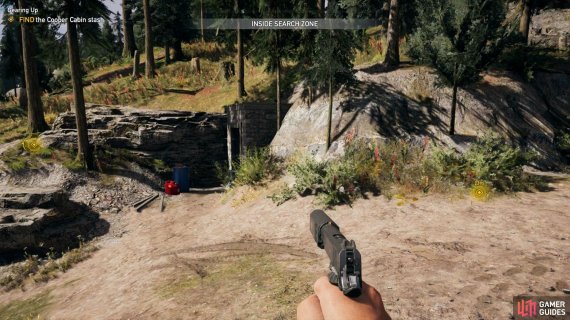 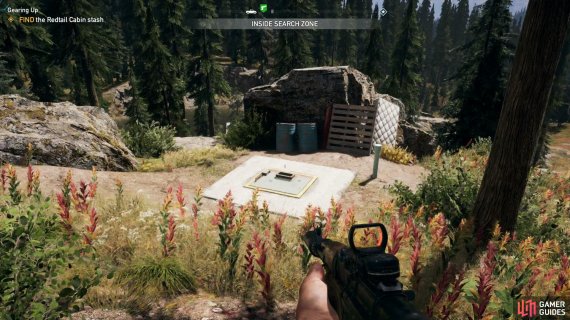 The first stash is found in a small bunker just outside the cabin (left), you’ll find the Redtail stash in the hatch. (right)

Inside the Redtail cabin is more ammo should you need it, a shotgun and a Vinyl Crate collectable. Exit the cabin, turn right and follow the short path to a hatch that you can open and access the bunker and the second stash hidden within.

As you leave this bunker you’ll discover via a radio message that the cultists are attacking the cabin where the last stash resides, jump on the nearby quad and head to the cabin.

Stop the ATV before it escapes with the stash

No time for stealth here, the cultists already have the stash and you’ll need to give chase using the quad you’re on. If you stray too far from the ATV then you’ll fail the mission so keep at full speed at all times.

The ATV is followed by two more that will shoot at you as you give chase. If you’re not confident in your ability to shoot and drive, ignore them and keep after the ATV in front.

As you get up close to the lead driver with the stash, pull out your gun and take fire to kill him (alternatively call upon Nick Rye to target him form above) and drop the stash. Head on over to the body and loot the stash before heading back to Wheaty at the Wolf’s Den to complete the mission. 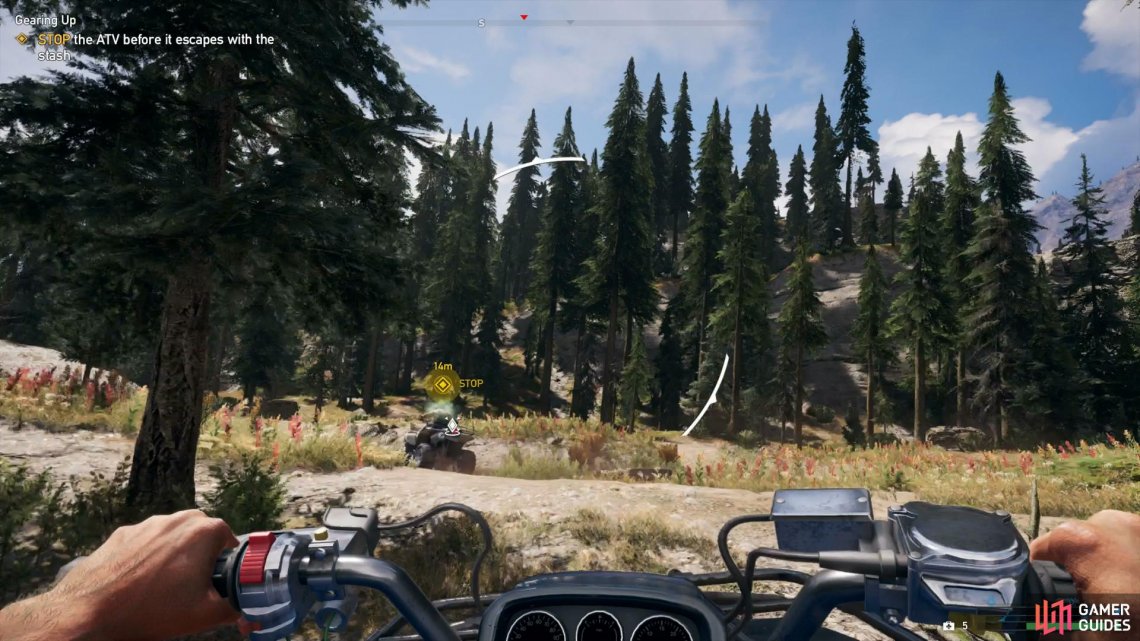 If you’re not able to get a shot off, use Nick Rye to fire from above.